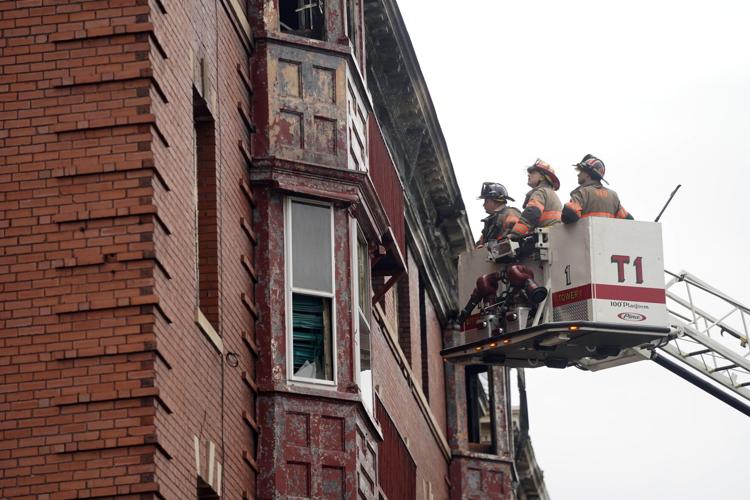 Firefighters inspect damage from an overnight fire at the unoccupied White Terrace Apartments on North Street in Pittsfield. Using the ladder is safer for inspection than entering the building. 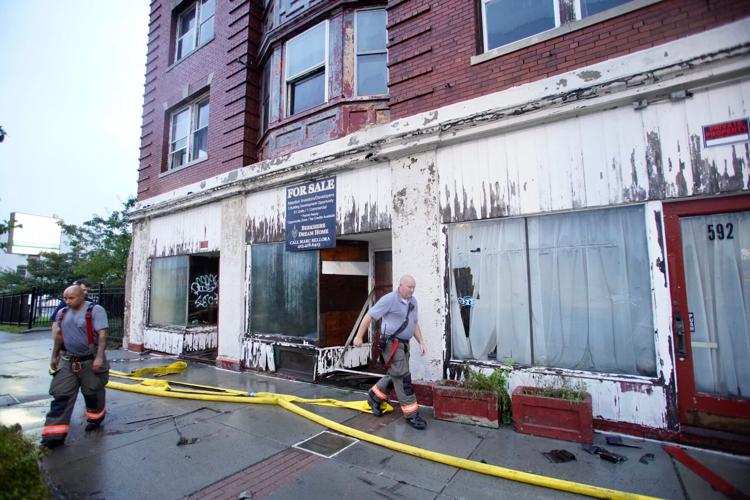 Firefighters continue to work early Thursday at the scene of an overnight structure fire on North Street in Pittsfield. 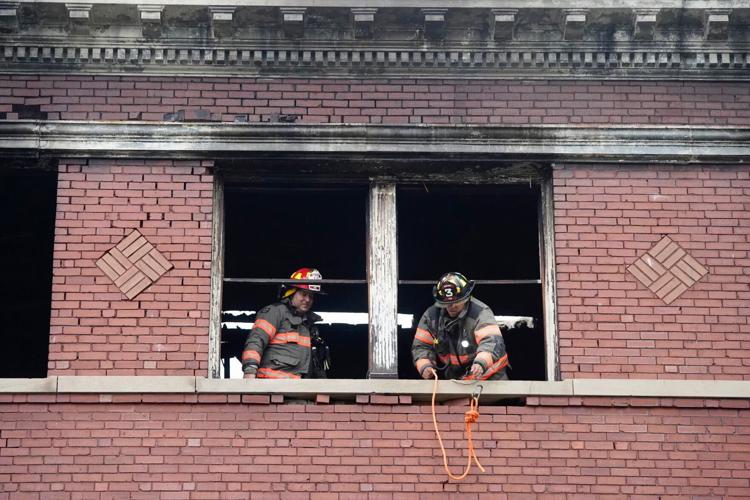 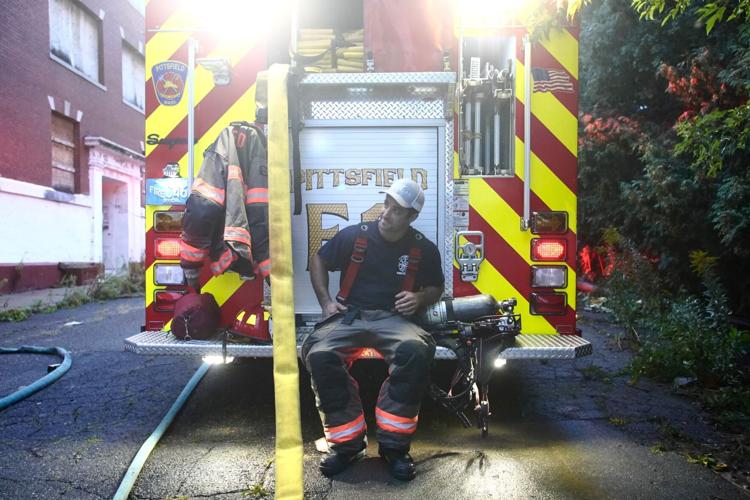 PITTSFIELD — Authorities are investigating a “major structure fire” that occurred overnight at a vacant building in the White Terrace apartment complex on North Street.

Four firefighters suffered minor injuries in the fire, which was reported shortly before midnight Wednesday, according to the Pittsfield Fire Department. Two of the firefighters were treated at Berkshire Medical Center for smoke inhalation.

The building had no electricity or gas service and long had been boarded up and locked to the public. The Fire Department confirmed the safety of one person who might have been squatting in the building.

Crews still were unable to conduct a complete sweep of the building for any other people by 8 a.m. Thursday because of concerns over the structure’s integrity. Pittsfield Fire Capt. Matt Packard said the fire had created a hole in the roof, and that there were holes in the floors from previously unfinished work on the building.

A report from the Fire Department sent out Thursday morning said that the first and fourth floors had heavy fire, heat and smoke damage, and the second and third floors had smoke damage.

The Fire Department received a single call about smoke coming from the building about 11:30 p.m. Wednesday. Packard said that crews arrived to a “heavy fire” in progress.

“We were hindered by the state of the building with everything being boarded up,” Packard said. “[Crews] went into an immediate defensive operation.”

The blaze grew to a three-alarm fire, and firefighters from Lenox and Dalton responded to aid the Pittsfield Fire Department.

Packard said that the department was aware of “people of interest,” but said it was too early in the investigation to determine what was the cause of the fire.

Smoke from the fire drifted south through the city overnight, with residents reporting smelling smoke almost 4 miles away, near Dan Fox Drive.

Shortly after 5:40 a.m., the Fire Department sent out a robocall via the city’s Code Red emergency system, urging motorists to avoid the area of the fire at 592 North St.

By about 7 a.m., investigators were on the scene surveying the damage, and the road had reopened.

Susan Sayer, the sales clerk at the Mobil gas station next door to the buildings, said that when she pulled up for work about 5 a.m. the fire was pretty much out.

“It was smoking, that’s all; it was all put out,” Sayer said.

Sayer said that staff checked the security cameras at the gas station but “got nothing.” Footage from the evening mostly showed smoke from the fire next door.

Sayer chatted with early morning customers about “the excitement” next door.

“I’m telling you, they ought to just tear it down,” one woman said. “It’s an eyesore; it’s been there for years with nothing done.”

White Terrace is a complex of three buildings, all of which were vacant. Two of the buildings had been damaged in previous fires.

On Sept. 10, 2017, nearly four years ago to the exact date, a fire at another of the buildings left 24 people homeless. Fire officials eventually determined that that fire was caused by a battery charging on a bed.

In December 1995, a fire engulfed the middle building, which was renovated and later reopened. In January 2008, a fire tore through one of the other buildings.

The property is owned by Madeline Culpo through a corporation called White Terrace Realty. Records from the Massachusetts secretary of state’s office show that the Culpo family has owned the property since 1984.

Listings on local realty sites show that the property recently was listed for about $1.1 million.

The property has received approval for about $2.05 million in state historic rehabilitation tax credits. State documents listing the credit awards show that a $12.8 million project had been proposed for the site, which included about $11.6 million in rehabilitation of the buildings’ historic features.

Pittsfield police and firefighters responded to a report of a fire at the White Terrace apartment complex on Thursday afternoon, one week after a “major structure fire” ripped through a building in the complex.

The man accused of setting a fire Thursday at White Terrace apartments is also believed to have started the three-alarm blaze that tore through another building in the same complex about one week earlier, police say.

The arson case against Joseph A. Stone, who is accused of setting one of two fires at the vacant White Terrace apartments in September, will be tried in Berkshire Superior Court.