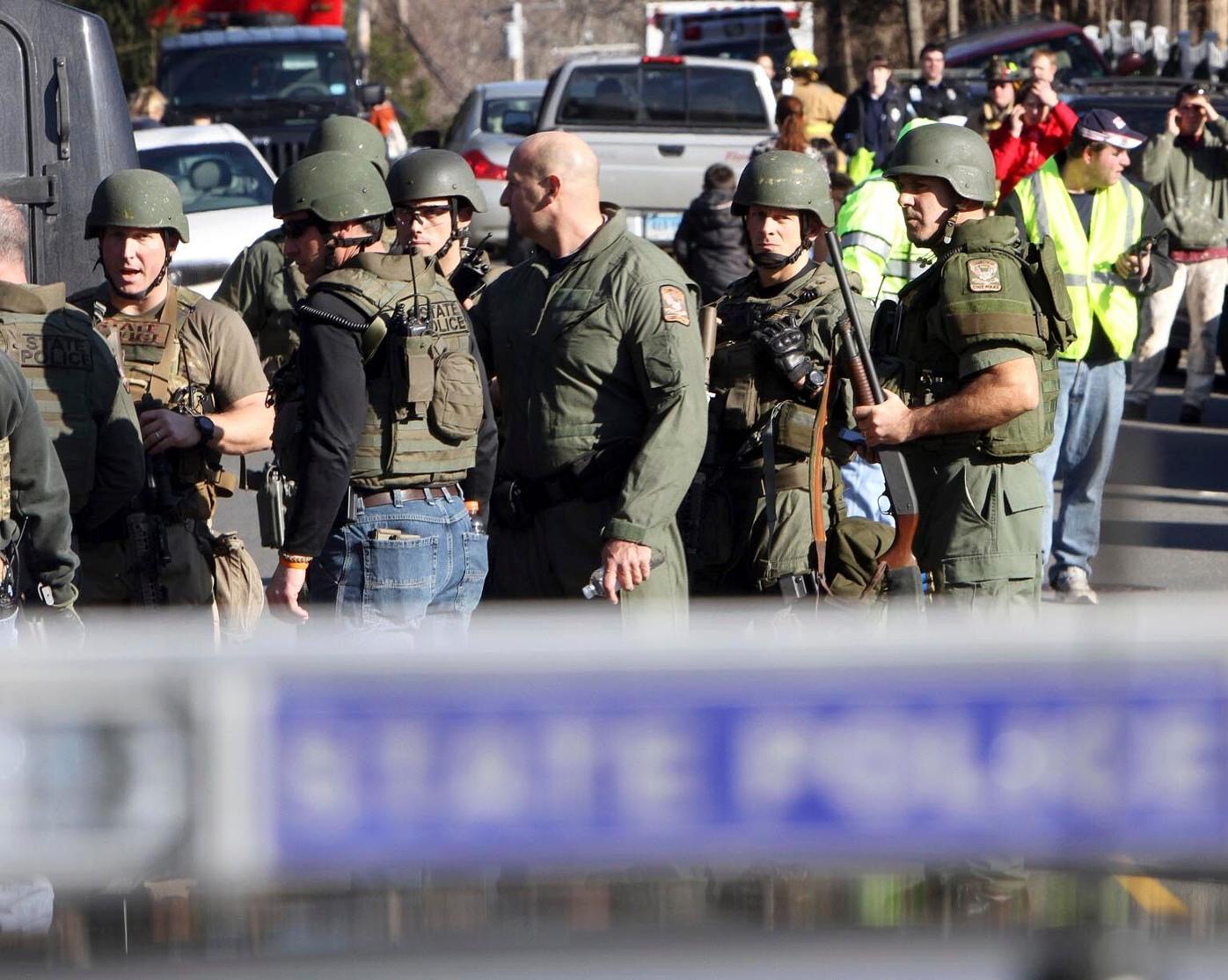 Heavily armed Connecticut state troopers arrive on the scene of the shooting at Sandy Hook Elementary School in Newtown, Conn. 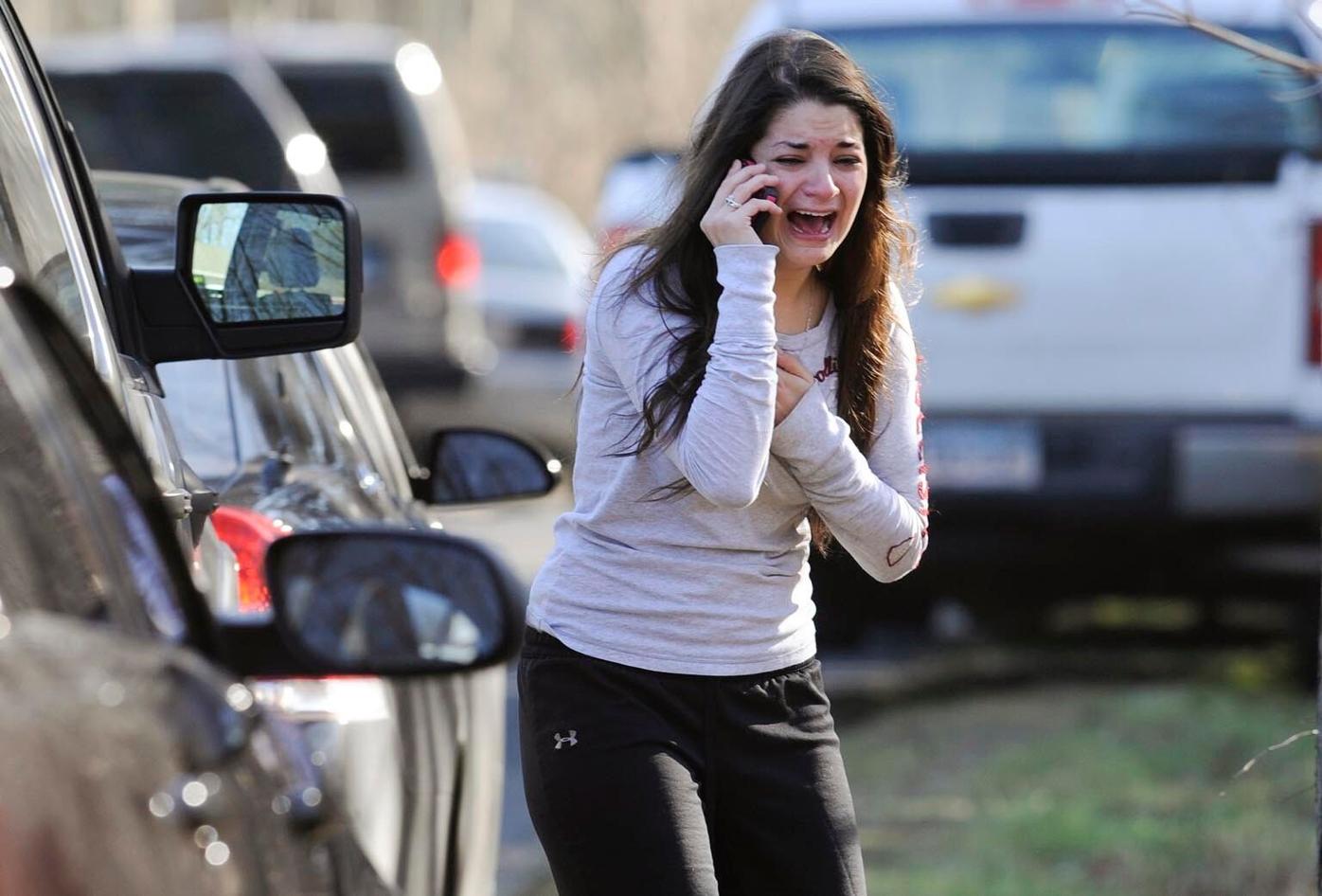 A woman reacts while waiting to hear about her sister, a teacher, at Sandy Hook Elementary School after the shooting.

Heavily armed Connecticut state troopers arrive on the scene of the shooting at Sandy Hook Elementary School in Newtown, Conn.

A woman reacts while waiting to hear about her sister, a teacher, at Sandy Hook Elementary School after the shooting.

NEWTOWN, Conn. -- A man killed his mother at their home and then opened fire Friday inside an elementary school, massacring 26 people, including 20 children, as youngsters cowered in fear to the sound of gunshots reverberating through the building and screams echoing over the intercom.

The 20-year-old killer, carrying at least two handguns, committed suicide at the school, bringing the death toll to 28, authorities said.

The rampage, coming less than two weeks before Christmas, was the nation's second-deadliest school shooting, exceeded only by the Virginia Tech massacre that claimed 33 lives in 2007.

"Our hearts are broken today," a tearful President Barack Obama, struggling to maintain his composure, said at the White House. He called for "meaningful action" to prevent such shootings, saying, "As a country, we have been through this too many times."

Police shed no light on the motive for the attack. The gunman, Adam Lanza, was believed to suffer from a personality disorder and lived with his mother, said a law enforcement official who was briefed on the investigation but was not authorized to discuss it.

Panicked parents looking for their children raced to Sandy Hook Elementary in Newtown, a prosperous New England community of about 27,000 people 60 miles northeast of New York City. Police told youngsters at the kindergarten-through-fourth-grade school to close their eyes as they were led from the building so that they wouldn't see the blood and broken glass.

Schoolchildren -- some crying, others looking frightened -- were escorted through a parking lot in a line, hands on each other's shoulders.

Law enforcement officials speaking on condition of anonymity said that Lanza killed his mother, Nancy Lanza, then drove to the school in her car with at least three guns, including a high-powered rifle that he apparently left in the back of the vehicle, and shot up two classrooms around 9:30 a.m.

Authorities gave no details on exactly how the attack unfolded, but police radio traffic indicated the shooting lasted only a few minutes.

A custodian ran through the halls, warning of a gunman on the loose, and someone switched on the intercom, alerting people in the building to the attack -- and perhaps saving many lives -- by letting them hear the hysteria going on in the school office, a teacher said. Teachers locked their doors and ordered children to huddle in a corner or hide in closets as shots echoed through the building.

State police Lt. Paul Vance said 28 people in all were killed, including the gunman, and a woman who worked at the school was wounded. The school's principal was believed to be among the dead.

A law enforcement official speaking on condition of anonymity said investigators believe Lanza attended the school several years ago but appeared to have no recent connection to the place.

At least one parent said Lanza's mother was a substitute teacher there. But her name did not appear on a staff list. And the law enforcement official said investigators were unable to establish any connection so far between her and the school.

Lanza's older brother, 24-year-old Ryan, of Hoboken, N.J., was being questioned, but a law enforcement official said he was not believed to have had a role in the rampage. Investigators were searching his computers and phone records, but he told law enforcement he had not been in touch with his brother since about 2010.

The officials spoke on the condition of anonymity because they were not authorized to discuss the unfolding investigation.

At one point, a law enforcement official mistakenly identified the gunman as Ryan Lanza. Brett Wilshe, a friend of Ryan Lanza's, said Lanza told him the gunman may have had his identification. Ryan Lanza apparently posted Facebook page updates Friday afternoon that read, "It wasn't me" and "I was at work."

Robert Licata said his 6-year-old son was in class when the gunman burst in and shot the teacher. "That's when my son grabbed a bunch of his friends and ran out the door," he said. "He was very brave. He waited for his friends."

He said the shooter didn't utter a word.

Stephen Delgiadice said his 8-year-old daughter heard two big bangs. Teachers told her to get in a corner, he said. "It's alarming, especially in Newtown, Connecticut, which we always thought was the safest place in America," he said. His daughter was uninjured.

Theodore Varga was in a meeting with other fourth-grade teachers when he heard the gunfire. He said someone had turned on the intercom so that "you could hear people in the office. You could hear the hysteria that was going on. I think whoever did that saved a lot of people. Everyone in the school was listening to the terror that was transpiring."

Also, a custodian ran around, warning people there was someone with a gun, Varga said.

"He said, ‘Guys! Get down! Hide!"' Varga said. "So he was actually a hero." The teacher said he did not know if the custodian survived.

Mergim Bajraliu, 17, said he heard the gunshots echo from his home and ran to check on his 9-year-old sister at the school. He said his sister, who was uninjured, heard a scream come over the intercom. He said teachers were shaking and crying as they came out of the building.

"Everyone was just traumatized," he said.

On Friday night, hundreds of people packed a Newtown church and stood outside in a vigil for the victims. People held hands, lit candles and sang "Silent Night" at St. Rose of Lima church. Anthony Bloss, whose three daughters survived the shootings, said they are doing better than he is. "I'm numb. I'm completely numb," he said at the vigil.

Mary Pendergast said her 9-year-old nephew was in the school at the time of the shooting but wasn't hurt after his music teacher helped him take cover in a closet.

Richard Wilford's 7-year-old son, Richie, told him that he heard a noise that sounded like "cans falling." The boy said a teacher went out to check on the noise, came back in, locked the door and had the children huddle in the corner until police arrived.

"There's no words," Wilford said. "It's sheer terror, a sense of imminent danger, to get to your child and be there to protect him."

On Friday afternoon, family members were led away from a firehouse that was being used as a staging area, some of them weeping. One man, wearing a T-shirt without a jacket, put his arms around a woman as they walked down the middle of the street, oblivious to everything around them. Another woman with tears rolling down her face walked by, carrying a car seat with a baby inside.

"Evil visited this community today and it's too early to speak of recovery, but each parent, each sibling, each member of the family has to understand that Connecticut -- we're all in this together. We'll do whatever we can to overcome this event," Gov. Dannel Malloy said.

Adam Lanza and his mother lived in a well-to-do part of Newtown where neighbors are doctors or hold white-collar positions at companies such as General Electric, Pepsi and IBM.

At least three guns were found -- a Glock and a Sig Sauer, both pistols, inside the school, and a .223-caliber rifle in the back of a car, authorities said. A law enforcement official speaking on condition of anonymity said some of the guns used in the attack may have belonged to Lanza's mother, who had legally bought five weapons.

The shootings instantly brought to mind such tragedies as the Columbine High School massacre that killed 15 in 1999 and the July shootings at a movie theater in Aurora, Colo., that left 12 dead.

"You go to a movie theater in Aurora and all of a sudden your life is taken," Columbine Principal Frank DeAngelis said. "You're at a shopping mall in Portland, Ore., and your life is taken. This morning, when parents kissed their kids goodbye knowing that they are going to be home to celebrate the holiday season coming up, you don't expect this to happen."

He added: "It has to stop, these senseless deaths."

Obama's comments on the tragedy amounted to one of the most outwardly emotional moments of his presidency.

"The majority of those who died were children -- beautiful little kids between the ages of 5 and 10 years old," Obama said.

He paused for several seconds to keep his composure as he teared up and wiped an eye. Nearby, two aides cried and held hands as they listened to Obama.

"They had their entire lives ahead of them -- birthdays, graduations, wedding, kids of their own," Obama continued about the victims. "Among the fallen were also teachers, men and women who devoted their lives to helping our children."