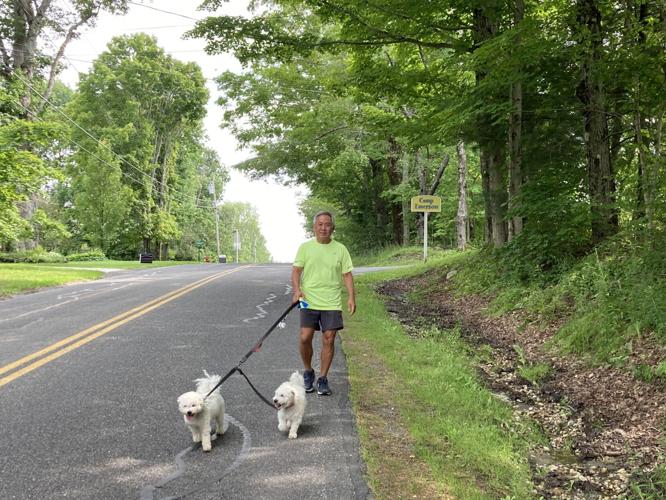 Plunkett Lake resident Fred Wang walks his dogs, Caspar and Daisy, along Longview Avenue in Hinsdale, past the entrance to Camp Emerson. The longtime family-owned camp would be sold to a national operator of RV parks if the town grants a special permit. 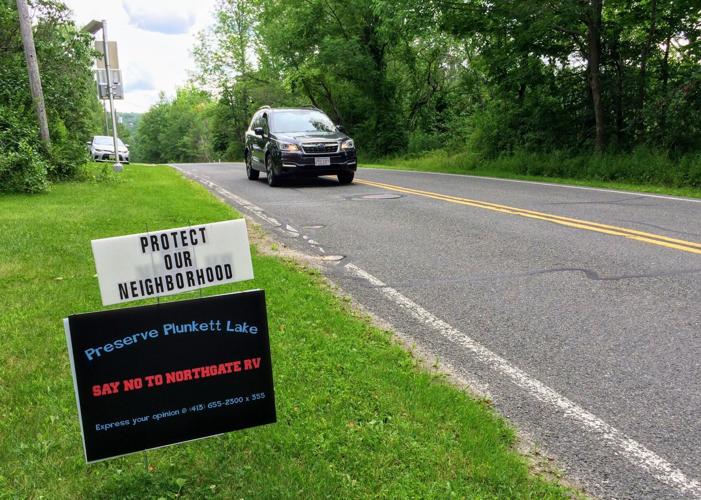 Residents on Longview Avenue plan to oppose a bid by Northgate Resort Ventures LLC to transform Camp Emerson into one of the company's branded "Yogi Bear's Jellystone Park" RV camping properties. The town's Planning Board takes up the issue Wednesday night. 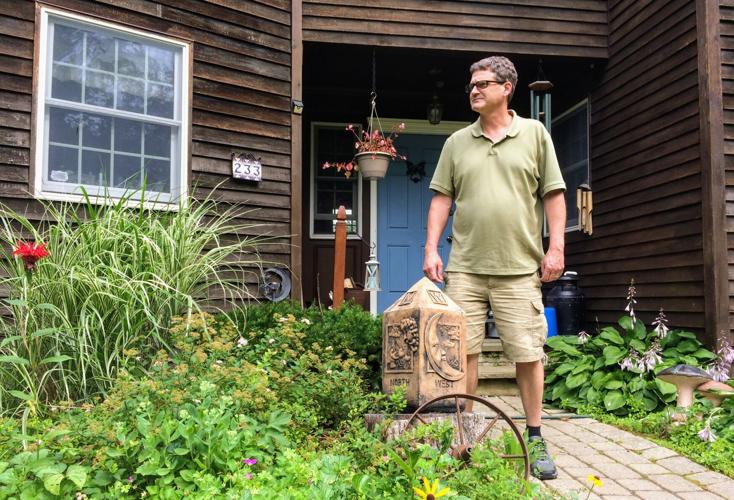 John Burrows has lived across Longview Avenue from Camp Emerson for 17 years. “We bought the house regardless of the camp,” he said. The prospect of a nationally run RV park alarms him. “It’s only for six weeks or two months out of the year,” he said of the current camp. “And they’re not driving in and out. It’s something completely different, the traffic alone.”

HINSDALE — In Hinsdale, planners will gather Wednesday to take their first close look at one of the largest development projects the town has seen. On Longview Avenue, residents are way ahead of them.

"It’s going to be an invasion, it seems to me. My biggest concern is the traffic coming out and overwhelming the neighborhood.”

— John Burrows, of Hinsdale, on a proposed RV park at Camp Emerson

Lawn signs sprouted this month along the twisting and undulating rural road. “Preserve Plunkett Lake. Say NO to Northgate RV,” they say. Some carry little notes above: “Protect Our Neighborhood.”

The signs, in black and blue, reveal a street that already is smarting from a national company’s pitch to transform Camp Emerson into a recreational vehicle park with more than 300 parking places.

Northgate Resort Ventures LLC filed an application in June for the special permit it needs to move forward. The Planning Board meets at 6:30 p.m. Wednesday to take it up for the first time. Northgate is expected to present its plan and then field questions from town officials. The Planning Board will issue a recommendation to the Select Board, after taking public comment at a second meeting, on Aug. 16.

The company proposes to remove dozens of the summer camp’s buildings and create paved areas for RV hookups, as well as play areas and a store. If approved, the Hinsdale site, owned and operated as a summer camp for half a century by the Lein family, would join Northgate’s portfolio of about 20 “Yogi Bear’s Jellystone Park” RV campgrounds.

Sue Lein, the camp’s current owner and director, did not respond to a request for comment on the planned sale.

Around the neighborhood, people have read Northgate’s application and traffic study — and say they have doubts. They believe an influx of RVs would create hazards on Longview and nearby streets, including Michaels Road, which runs by Plunkett Lake a quarter-mile to the south. They note that the area is part of an “area of critical environmental concern.

And they’re concerned that the town’s primary water supply is located at the backside of Camp Emerson’s 155-acre property, about a mile east of Hinsdale’s wooded border with Dalton.

John Burrows has lived with his family at 233 Longview Ave., directly across from the camp, for 17 years. That has been OK, he says, because the street experiences extra traffic for just six weeks a summer. Northgate’s application says its properties are in use for six months a year, from May to October.

“We have to be cautious of the regular traffic, let alone increasing it,” Burrows said. “I have a hard time fathoming using this road to walk or bicycle.”

Burrows, a Wisconsin native who works in papermaking, isn’t one to jump to conclusions. But, he views the proposal as too much for too small a neighborhood.

“If this was a 50-RV site, that would be one thing,” he said. “It’s a monster size. It’s going to be an invasion, it seems to me. My biggest concern is the traffic coming out and overwhelming the neighborhood.”

The Eagle requested comment from Northgate, asking whether the Hinsdale project can be undertaken without changing the character of the area. As of Tuesday, Northgate had not responded.

Dr. Fred Wang, a retired Harvard Medical School professor, is a common sight on Longview, striding in brightly colored athletic wear with his two frisky bichon frise dogs, Caspar and Daisy, up ahead on point. He likes to walk up Longview from his home along Plunkett Lake, mindful that the road’s rise and fall reduces visibility.

How to attend, in-person or by Zoom

The Hinsdale Planning Board will meet at 6:30 p.m. Wednesday at Nessacus Regional Middle School to begin consideration of the Northgate Resort Ventures LLC proposal for Camp Emerson.

To attend remotely, people need to register in advance at a Zoom address, also listed on the town's website. After registering, people will receive an email containing a link to the meeting.

The meeting agenda: Introductions of presenters and town staff, a presentation by Northgate, comments and questions from town officials. Public comment will be accepted at a later meeting, on Aug. 16.

Wang pored over Northgate’s traffic study. His diagnosis: A 300-plus RV park is out of character for the town and incompatible with the neighborhood. Wang and other neighbors have questions already queued up for the Aug. 16 public hearing, when they get their chance to speak. They can only listen Wednesday.

The traffic study explored how vehicles would come in and out of the property, through a widened entrance.

“It doesn’t address anything beyond the entry here,” Wang said, gesturing behind him while visiting Burrows’ home, a clipboard in hand holding excerpts from Northgate’s filings. “There are holes in here. There are things here that don’t add up.”

In the company’s special permit application, White Engineering of Pittsfield concludes that the RV camp would not strain the water supply. Wang thinks future conditions might change that assessment.

“The watershed’s too small when we have drought conditions,” he said. “If anything, we should be taking this land by eminent domain to protect the water supply.”

Lee Marcus, another lakeside resident, says he and his wife moved to Hinsdale, in part, because she had gone to summer camp here at Camp Romaca.

“For us as residents of the town, we want to be in a safe and natural environment — that’s why we’re here,” he said. “We’re concerned about all the infrastructure things.”

Marcus and others wonder how big RVs will thread their way around tight corners, like the one at Bridge and Main streets near the town center.

“You literally cannot get two cars by here,” said Deborah Fassell, who lives at 48 Longview Ave., closer to town.

Paula Walczyk, who lives on Plunkett Lake, worries that the project is moving too fast. She wonders whether the town is prepared to give the proposal a hard look. The Planning Board has posted Northgate’s application and traffic study, along with the timetable for its analysis. Even so, Walczyk says she was surprised to learn about the project through a story this month in The Eagle.

“It feels that the town is not doing the level of study that we are. And we’re just residents here,” she said.

In a recent mass email to residents, Richard Scialabba, chair of the Select Board, urged town officials to attend Wednesday’s meeting, which will be held at the Nessacus Regional Middle School in neighboring Dalton, “to ask questions and raise concerns they see regarding this proposal. … The Town must be well represented at this meeting.”

People behind a major Hinsdale development say they can tuck 317 RV sites onto a summer camp property without messing up the neighborhood. But Hinsdale officials had questions this week about traffic, water supplies, sewer use, environmental harm — and whether an influx of visitors would be simply too much for nearby Plunkett Lake.

Representatives of a national recreational vehicle camping company will be back in Hinsdale soon to pitch their new vision for Camp Emerson.

Five months after it surfaced, a proposal to build an RV camping destination in Hinsdale is back in play, as its proponents make their pitch, anew, to a different town board.