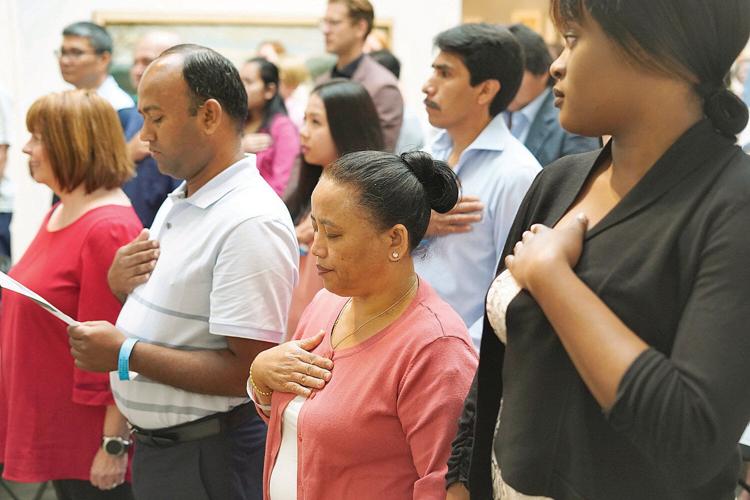 People from around the world wait to take their oath of allegiance in 2019 from Berkshire County Juvenile Court Judge Joan McMenemy during a naturalization ceremony at the Norman Rockwell Museum in Stockbridge. The ceremony, which added 20 U.S. citizens, was held by U.S. Citizenship and Immigration Services, which brings the naturalization ceremony to the museum every year. 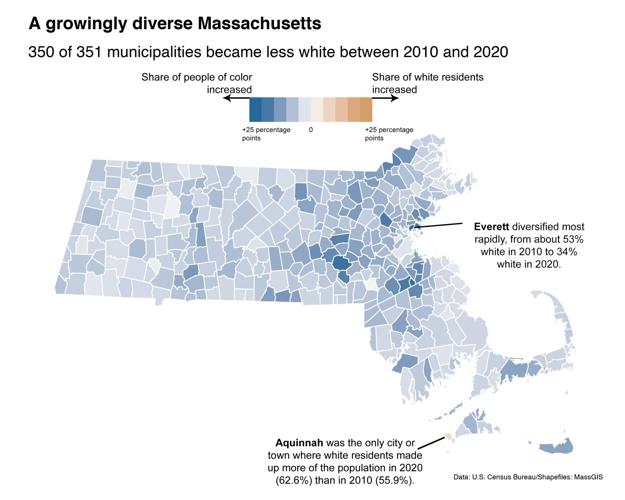 The 2020 decennial U.S. Census painted a portrait of a diversifying Massachusetts, and those changes stretched far beyond the state’s burgeoning urban centers to touch nearly every single municipality from Salisbury to Sheffield.

Every single city and town in the Bay State except for one saw its share of white residents as a percentage of the local population decrease from 2010 to 2020, matched by corresponding increases in the share of residents identifying as Black, Hispanic or Latino, Asian or some other racial demographic, according to data Census Bureau officials released last week.

That nearly universal trend carried through cities where people of color already represented a majority of the population, small towns far whiter than the statewide average, and suburban communities rapidly becoming more multicultural.

In 2010, about 53 percent of Everett’s residents and 83 percent of Avon’s population were white. The white share of the population in both communities dropped 19 percentage points — the largest change in the state — by 2020, transforming Everett into a mostly nonwhite community and pushing Avon to a point where almost four in 10 residents are people of color.

Over the past 10 years, the non-Hispanic white population in Berkshire County fell, while the region gained Black, Asian, Hispanic and multiracial residents.

The latest Census data indicate that white residents still make up the largest subset, about 34 percent, of Everett’s 49,000-plus residents. More than 28 percent of the city’s population now identifies as Hispanic or Latino, up from 21 percent a decade ago.

The lone municipal-level exception to the Bay State’s pattern of becoming less white was Aquinnah, a tiny community on the western tip of Martha’s Vineyard. Ten years ago, about 56 percent of the town’s estimated 311 residents were white. In the 2020 Census, that rate rose to nearly 63 percent.

Statewide, the white population shrunk over the past 10 years while that of most racial minorities grew, continuing long-running demographic shifts in both Massachusetts — which historically has been whiter than the rest of the country — and in the United States as a whole.

The Bay State had about 235,000 more white residents in 2010 than it did in 2020, and the white share of the population dropped in that span from more than three-quarters to nearly two-thirds. Over the same period, the statewide Black share of the population increased from about 6 percent to 6.5 percent, the Hispanic or Latino share grew from 9.6 percent to 12.6 percent, and the share identifying as Asian rose from 5.3 percent to about 7.2 percent.

Massachusetts had 13 municipalities where non-white residents outnumbered white residents in 2020, five more than it did after the 2010 Census. The white share of the local population dropped below 50 percent in Everett, Lowell, Malden, Revere and Worcester over the past decade.

With that change, white residents are now a minority of the population in six of the state’s 10 most populous cities: Boston, Worcester, Springfield, Lowell, Brockton and Lynn.

Fall River, which is about 71 percent white, is the only city in that top 10 list that is less diverse than Massachusetts as a whole.

And many smaller communities that were once homogenous have also undergone substantial transformation as the currents of demographic change swirl.

Take Hopkinton, a 28-square-mile MetroWest community perhaps best known as the starting point for the Boston Marathon, as an example. More than nine out of 10 of its residents were white in 2010, and the Census Bureau that year counted 654 town residents who identified as Asian.

The shifting racial makeup of the state could factor heavily into redistricting decisions that lawmakers will make in the coming months as they embark on the once-every-decade process of redrawing state legislative, congressional and Governor's Council boundaries.

Over the ensuing decade, the town’s Asian population exploded to about 3,300, a more than 400 percent increase. That rapid expansion helped Hopkinton’s overall population grow by more than a quarter since 2010, even as the town’s total number of white residents remained virtually flat.

The shifting racial makeup of the state could factor heavily into redistricting decisions that lawmakers will make in the coming months as they embark on the once-every-decade process of redrawing state legislative, congressional and Governor’s Council boundaries.

After the 2010 Census, the Legislature crafted 20 majority-minority districts in the House and three in the Senate.

By some accounts, that total no longer fully reflects the state: in February, the Lawyers for Civil Rights group published a report estimating that five existing House districts and one Senate district have transitioned from mostly white to mostly non-white since the last redistricting process.