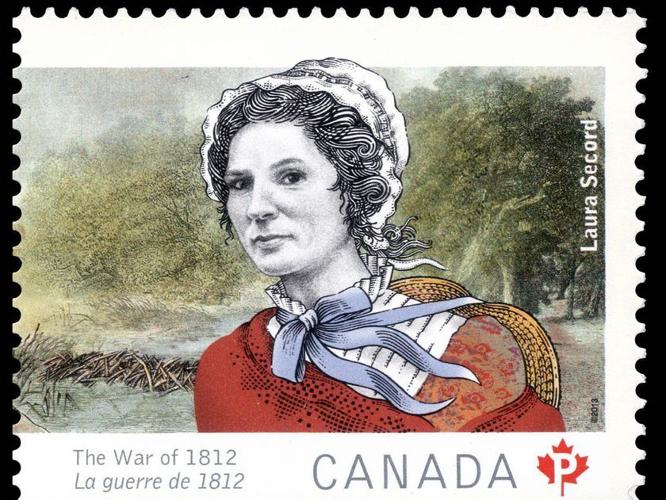 One of the Canadian stamps that recalls the deeds of Laura Ingersoll Secord, a Great Barrington native who died 152 years ago today. 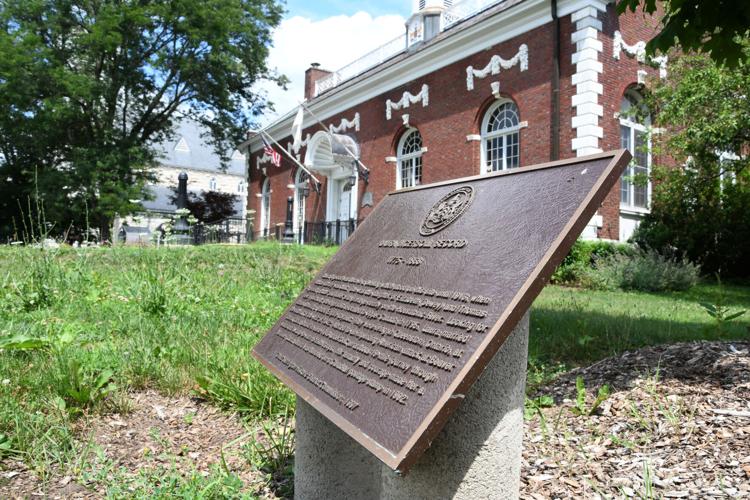 A plaque detailing Laura Ingersoll Secord’s “tenacity and courage” was installed in 1997 at her former home, the Mason Library in Great Barrington. 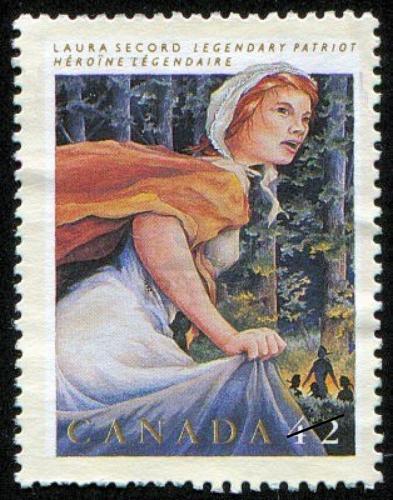 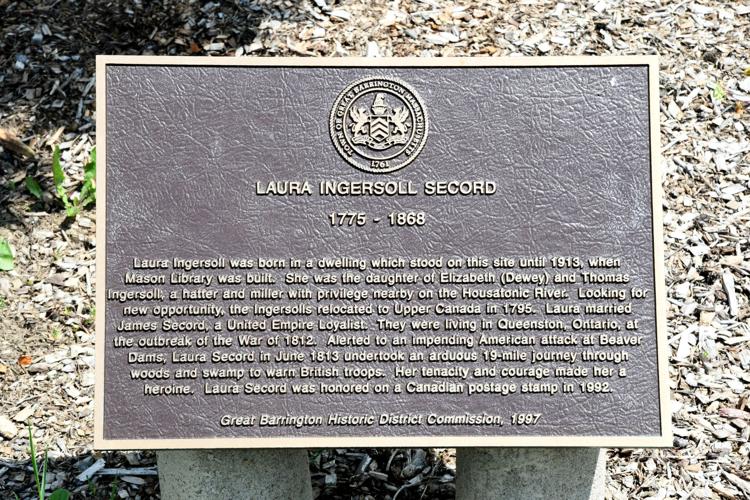 A plaque detailing Laura Ingersoll Secord's “tenacity and courage” was installed in 1997 at her former home, the Mason Library in Great Barrington.

One of the Canadian stamps that recalls the deeds of Laura Ingersoll Secord, a Great Barrington native who died 152 years ago today.

A plaque detailing Laura Ingersoll Secord’s “tenacity and courage” was installed in 1997 at her former home, the Mason Library in Great Barrington.

A plaque detailing Laura Ingersoll Secord's “tenacity and courage” was installed in 1997 at her former home, the Mason Library in Great Barrington.

GREAT BARRINGTON — Late one night, as foreign soldiers sat eating her food, a middle-aged mother overheard them speak of a surprise attack. She went alone through 19 miles of swamp and forest to alert 50 local militiamen.

Her warning delivered, the militia’s crafty commander tricked the 600-strong enemy force into a surrender, losing no more than 15 of his own soldiers in a fight that claimed 25 enemy lives.

Such is the story of Laura Ingersoll Secord, a native of Great Barrington who died 152 years ago today.

In 1813, she journeyed from her home in Queenston, Ontario, to the campsite of Lt. James Fitzgibbon to deliver her message. A 1997 plaque detailing her “tenacity and courage” stands at her former home, the Mason Library in Great Barrington.

This public recognition could seem out of place, since those foreign soldiers were Americans — and the side she assisted was that of the British Empire during the War of 1812.

That’s how it struck Richard Allen, of Egremont, who, in a letter to the editor of The Berkshire Eagle, questioned why her plaque should remain in Great Barrington, amid calls this spring to rename military bases that honor Confederate soldiers. To Allen, Secord was a traitor.

But, American and Canadian historians defend Secord as a patriot of her time and a woman whose contribution to the male-dominated history of this continent should be lauded, regardless of her nationality.

Gary Leveille, a local historian and archivist for the Great Barrington Historical Society, said critics overlook that Secord, though born in Great Barrington, had become a British subject after living in Canada for 20 years. She no longer was a U.S. citizen.

“How can you be a traitor to the United States?” he asked.

Secord had been born Laura Ingersoll on Sept. 13, 1775, and, like everyone in the Colonies before 1776, was a subject of the British crown.

The Ingersolls had lived as British subjects in Massachusetts for five generations. Her father, Thomas Ingersoll, was a businessman who served as tax collector and constable in Great Barrington, a village with a population of revolutionaries and loyalists.

When the time came, her father joined the side of the revolution, rising to the rank of major in the town’s militia. His loyalty was perhaps economic: Taxes from the British crown were harming his business. In addition, loyalty to the British crown became increasingly dangerous.

According to historian Peggy Dymond Leavey, Loyalists often had their property seized or destroyed before being tarred and feathered, then exiled from their towns by revolutionaries.

After the war, Thomas twice was widowed and no longer could find business in a nearly bankrupt Massachusetts. Even with his family and military history in the commonwealth, he decided to leave his hometown in 1795, when his daughter Laura was 20.

“The British are giving away free land in Canada, and [Secord’s] father is given 66,000 acres,” said Melissa Bottomley, curator of the Laura Secord Homestead in Queenston. “No loyalty to the British, they just come up to Canada where there’s free land and end up settling here.”

Thomas Ingersoll operated a tavern in Queenston while he surveyed and developed his land. It was at this tavern that his daughter met James Secord, a refugee of the American Revolution whose loyalist family fled New Rochelle, N.Y., when he was 3. Canada took in their family and rewarded them for military service with land and wealth. After the two married in 1797, Laura moved into Secord’s home and worked in his shop.

According to Bottomley, she would have identified as a Canadian and a woman of Queenston on the night of her journey.

“They just heard it was going to be 50 British against 600 Americans, and she figured, ‘I can prevent a massacre.’ A lot of these men that are stationed with Fitzgibbon are probably from this area, so they might have even known a couple of them,” she said.

Historians argue that “treason” is a misnomer for what Laura Secord did, since Canada had given her father a new beginning and Secord began a new family there.

The fact remains, though, that her act of daring likely prevented an American military victory — and as such usually would not merit public recognition in an American town. But, defenders of the Secord plaque in Great Barrington view it as a feminist achievement, not a military one, and say acclaim for women like her is long overdue.

Bernard Drew, who served as chairman of the Great Barrington Historic District Commission when the plaque was placed, said that, for decades, community members had suggested noting Laura Secord’s bravery.

“Some recognition ought to be given to one of Great Barrington’s most famous daughters,” he said. “The idea has been floating around for years. Barrington has had a number of historical markers, but throughout Berkshire County, they almost always make note of men. ... Everyone agrees that Laura Secord was a brave individual.”

Laura Secord’s story had failed to fully surface. According to Bottomley and Leveille, her role in the 1813 Battle of Beaver Dams was virtually ignored throughout the 19th century and subject to revisions minimizing her contribution, including the assertion that Fitzgibbon already knew about the coming attack.

“They got her name wrong when they were telling her story,” Bottomley said. “They fabricated parts of the story just to make it more interesting.”

Only in the 20th century did governments in Canada and the United States begin to recognize women like Secord.

Bottomley said Canada created the first monument to a woman in 1910, and by the 1920s, Laura Secord was an icon in the women’s suffrage movement. She became a symbol of the strength and resolve.

“A lot of the women that worked behind the scenes throughout our nation’s history and other nations’ histories haven’t always gotten the recognition that they deserved, so Canada, rightfully so, was very proud of what she did,” Leveille said.

The plaque created by Drew and the Great Barrington Historic District Commission was meant to celebrate Secord as a woman who changed history but received no credit during her lifetime.

They placed it at the site of her childhood home, which functioned as the town library before the Mason Library.

Bottomley says Secord’s nighttime journey through the Canadian swamp was extraordinary for a woman at that time, and her actions helped circumvent loss of life between two countries that no longer are enemies.

“The biggest thing is that she was a remarkable person, and she needs to be celebrated for trying to save her family and friends,” Bottomley said.

Letter: Doesn't Secord statue have to go, too?

To the editor: The Eagle editorial page Saturday published a Wahington Post opinion piece that urged the renaming of military installations bearing the names of Confederate generals on the ground …

The final program in the Great Barrington Historical Society's "Rebels with a Cause: A Provocative Lecture Series" will be presented at 2 p.m. Saturday, Nov. 2, at St. James Place, 352 Main St.Two …