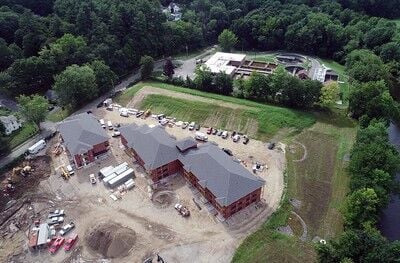 The Bentley Apartments, at 100 Bridge St. in Great Barrington, take shape on the banks of the Housatonic River last year. The apartments are complete, and activists still are sounding alarms about the safety of tenants at the capped former toxic waste site, and the proximity to the sewer plant, shown at top, to the south. 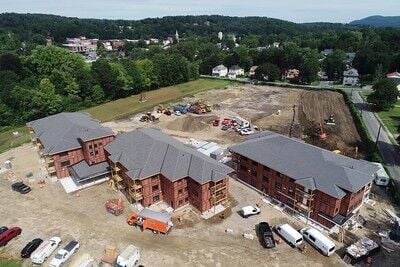 The Bentley Apartments, at 100 Bridge St. in Great Barrington, take shape on the banks of the Housatonic River last year. The apartments are complete, and activists still are sounding alarms about the safety of tenants at the former toxic waste site. 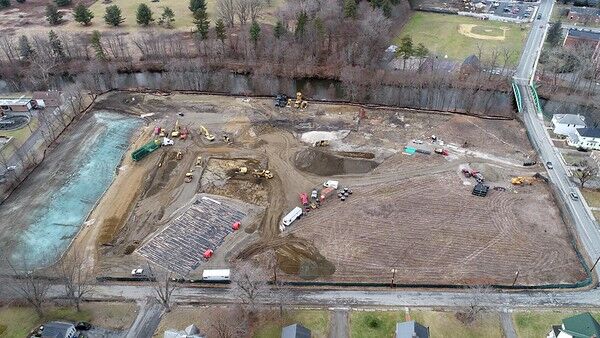 GREAT BARRINGTON — The affordable apartments off Bridge Street are ready to rent after polluted dirt at the toxic waste site was capped and clean soil trucked in to replace it.

But, residents and activists still are sounding alarms about the safety of those who will live in the Bentley Apartments, despite the state’s signoff on the remediation project — and test results — for the property’s owner, Community Development Corp. of South Berkshire.

The matter now has engaged the Board of Health, which discussed it at its March 12 meeting.

And one group is pointing to a concern that some imported soil for a fresh, 3-foot-deep top layer, might have been contaminated as well.

Judy Herkimer, of the Housatonic Environmental Action League, a tri-state group that monitors the watershed, told the development corporation during its state-required public comment period that she spotted mention of this in a 400-plus page engineer’s report posted to the Massachusetts Department of Environmental Protection’s website.

Based on that, she asked whether excess backfill from Segalla Sand and Gravel Co. in North Canaan, Conn. — it had sat at the wastewater plant next door — is contaminated with dioxins and furans after engineers noted that levels of the chemicals had risen during the capping in which toxic soil is contained in sealed mounds called “berms.”

One of Segalla’s owners, Tess Segalla Yoos, said its topsoil comes from an organic dairy farm and then is mixed with lime to adjust the pH. She said the sewer sand automatically is tested, and its other products are tested only at the request of the contractor.

The DEP does not require testing of imported fill, and relies on the property owner’s environmental consultant, according to Kathleen Fournier, an agency scientist.

That consultant, Timothy Snay, of Ransom Consulting, said the fill wasn’t tested “because we knew where it was coming from.”

He explained that, in practice, it’s like buying a bag of soil at the garden store, or importing soil when building a home.

He also said that Segalla has an interest in selling clean products so it does not get “blacklisted.”

The issue is just one that opponents of the housing and remediation project have raised during the final regulatory lap for the development corporation as it completed the project.

The $17 million endeavor yielded a mix of 45 affordable and low-income rental units on 2 acres of an 8-acre former toxic waste site in a prime, downtown location.

A lottery for the rentals is underway.

Six remaining acres mostly have been remediated as well, and secured and fenced off to prevent any exposure to pollution until it is developed.

Some residents and activists have assailed the entire project, saying that, ideally, the soil should have been cleaned with new technology or shipped to a licensed facility.

The DEP previously had shut down a bioremediation attempt there, claiming that initial results indicated a failure.

The development corporation has said that the expense of remediating the site any other way would have killed the project and left the land to fester. The nonprofit says that, under the command of the DEP, it must test and monitor in perpetuity to make sure the berms are secure.

A fund of $250,000 is set aside to restore them should they sustain damage.

Allison Marchese, the Community Development Corp. of South Berkshire’s executive director, referred technical questions to Ransom. She said the nonprofit also is part of the community.

“We care as much as they care,” she said of those who have questioned the project. “I understand why people would have feelings, but here are the facts, and we are working through a very standardized process that was put together by DEP. We’re not the enemy here.”

Most complaints still echo that cheap housing that also is next to a sewer plant is unjust.

“This is unfair; this is inequitable,” said Herkimer, who isn’t confident that the geotextile berms will, as claimed, hold, given the weather and burrowing animals with “sharp teeth.”

And she wants the inhabitants to be thoroughly informed about the pollution by cancer-causing chemicals like pentachlorophenol, which the Environmental Protection Agency announced March 5 will be banned.

Nan Wile, a town resident, asked the Board of Health to investigate risks to tenants there, since she believes that town officials gave “hasty” approvals to boost the percentage of affordable housing in town to meet the state requirements.

“It is a partial/temporary containment effort … which falls short of the definition of remediation,” she wrote to the development corporation.

At the March 12 Board of Health meeting, member Dr. Ruby Chang questioned whether the capping approach was, indeed, the “best technology” available for a cleanup.

“I don’t know if we had done our due diligence to ensure that that is the case,” she said.

One town official said that people might not like the siting of the apartments but that permitting and planning with the town was anything but “hasty.”

“Anyone who followed the special permit process knows it was long,” said Select Board Chairman Stephen Bannon. “It was painfully slow.”