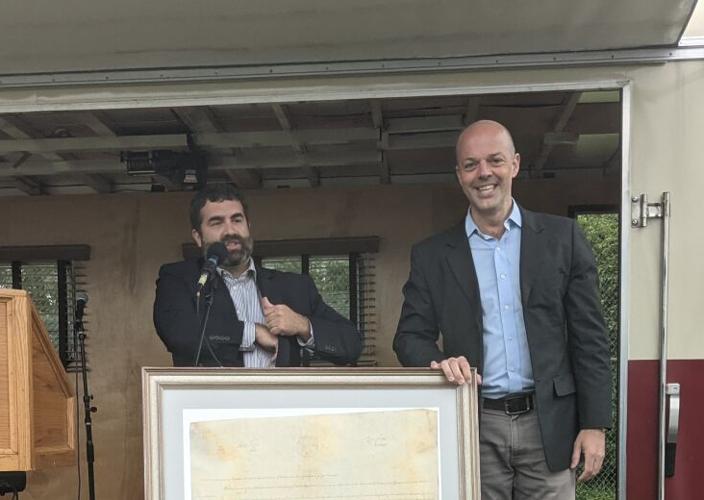 State Rep. Paul Mark, left, and state Sen. Adam Hinds presented the town of Windsor with a print of its original charter in July. Members of political circles expect Hinds to announce shortly whether he will run for lieutenant governor in 2022, and colleagues say Mark has spoken with them about the possibility of running for Hinds’ Senate seat if it becomes open. 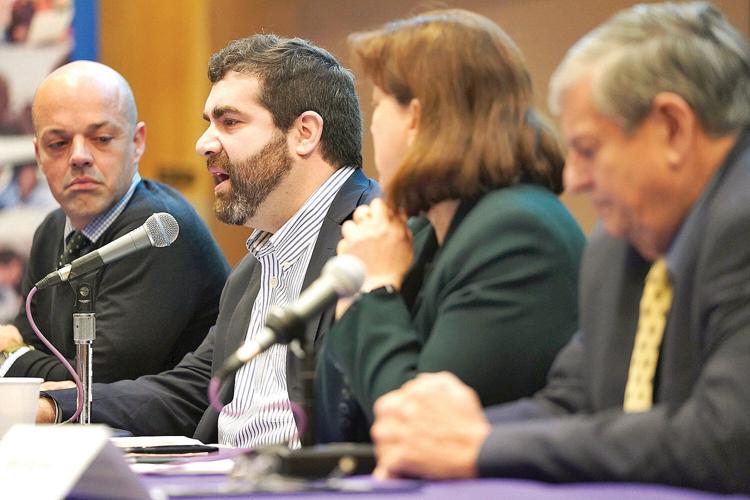 At a 2019 event, state Sen. Adam Hinds, D-Pittsfield, left, looks on as Rep. Paul Mark, D-Peru, speaks. Members of political circles expect Hinds to announce shortly whether he will run for lieutenant governor in 2022, and colleagues say Mark has spoken with them about the possibility of running for Hinds’ Senate seat if it becomes open.

PITTSFIELD — State Sen. Adam Hinds is expected to announce soon whether he will run for lieutenant governor, six people in Western Massachusetts Democratic circles have told The Eagle.

Some think he’s decided, but Hinds himself isn’t saying yet.

“I’ve used the summer to explore a potential run for statewide office, and it’s exciting to try to identify ways to have a bigger and bigger impact for the region,” the Pittsfield Democrat, who was first elected in 2016, told The Eagle in a phone call Thursday.

Hinds’ entry into that race would leave the Berkshire, Hampshire, Franklin and Hampden seat in the Senate open. Colleagues of state Rep. Paul Mark, D-Peru, said he has spoken with them about the possibility of pursuing the seat, should Hinds run for lieutenant governor.

Their decisions could have implications for the Legislature’s redistricting process, in which the four Berkshire seats in the House of Representatives are expected to decrease to three.

A Pittsfield Democrat first elected in 2016, Hinds said in June that he was considering a run for higher office and was “working to put together a team” to decide. If he runs, he would join a Democratic field that includes state Rep. Tami Gouveia, D-Acton, and two political newcomers, Bret Bero and Scott Donohue.

Neither Hinds nor Mark would confirm their intentions Thursday, but Statehouse colleagues said they believe both would be strong candidates if Hinds and Mark choose to pursue the new offices.

“I think Paul is just the right person to run for state Senate, and I would fully support him in doing so,” state Rep. Tricia Farley-Bouvier, D-Pittsfield, said of Mark, who was first elected in 2010.

“He’s the one that we turn to in the House all the time on labor issues,” Farley-Bouvier said, also referencing Mark’s work on student debt, public higher education and opioid task forces in Franklin and Berkshire counties.

State Rep. John Barrett III, D-North Adams, said that Mark has been “very important to Berkshire County,” and that “his advocacy for higher ed, with two public institutions in Berkshire County, would be a tremendous asset in the Senate.”

Mark, 42, comes from a union family — his father was a Teamster — and began working full-time for Bell Atlantic, now Verizon, at 20. After becoming a member of the International Brotherhood of Electrical Workers, Mark used union benefits to earn five educational degrees, including professional doctorates from Suffolk University and Northeastern University. He remains a dues-paying member of IBEW and the Massachusetts Teachers Association, his website says.

“If Paul were to run, he would have labor support in the district and statewide,” said Brian Morrison, president of the Berkshire Central Labor Council, for which Mark has been a delegate. “When the labor movement needs something done, Paul is one of the people we call.”

Mark said in February that his top priorities were clean-energy expansion and job growth.

Pignatelli said discussions about the future of the Senate seat began in September, when speculation about Hinds’ plans grew. While Pignatelli and Farley-Bouvier each considered running for that seat when it opened in 2016, both said they will seek reelection rather than run for Senate.

The Senate district, which is expected to expand once more in redistricting, “is not as attractive as it once was” due to its size and the travel it would require, Pignatelli said.

Former state Sen. Andrea Nuciforo Jr. spurred speculation when he added $50,000 in April to his campaign account, which he never closed. Nuciforo, who held the seat from 1997 to 2007, said he will support Hinds if Hinds seeks reelection. But, if Hinds pursues higher office, Nuciforo — an attorney and co-founder of Berkshire Roots — plans to run for his old seat.

“I want to give Adam all the space he would possibly need to make that decision on his own terms, and if he runs for reelection I support him all the way,” Nuciforo, 57, said. “If he chooses not to run for reelection, I certainly will.”

While Hinds, 45, has yet to declare his plans, speculation about a run for higher office has continued to grow with his fundraising numbers and public appearances. Hinds has more than doubled the balance of his campaign account in 2021. He had more than $164,000 in the account as of Aug. 31.

In the past month, he has participated in events run by the Worcester Democratic City Committee, the Massachusetts Biotechnology Council and the Massachusetts Institute of Technology, according to his social media accounts.

Late this spring, Hinds and Alicia Mireles Christoff, his wife, bought a house in Amherst, where she is an assistant professor of English at Amherst College. Hinds said in June that his family planned to continue to spend most of its time in Pittsfield and that he did not think buying the Amherst home would affect his ability to run for reelection in the Senate, should he choose to do so.

To make it onto the ballot for a primary, all statewide candidates — including for lieutenant governor — must garner votes from at least 15 percent of delegates at the party convention.

Pignatelli said he believes Hinds would be “the frontrunner” if he sought the nomination.

“First of all, I’ll be sad if Adam leaves the Senate,” Pignatelli said. “But, if he does decide to jump in, right now I think he is the guy to beat.”

Farley-Bouvier said she and Hinds have worked well on issues related to Pittsfield, adding, “I’m not committed to anybody at this point, but I think Adam’s terrific.”

Hinds would be “a qualified candidate,” Barrett said, adding that Hinds “certainly has established himself as someone in the Senate in the short time he’s been there.”

Matt Barron, a Democratic political consultant based in Chesterfield, said he sees Hinds and Gouveia, the representative who announced her candidacy for lieutenant governor in June, as “both fairly progressive.

“I just see more differences of emphasis, and maybe that’s because he represents more of a rural district and she has a more suburban district,” Barron said. “I don’t see major policy differences.”

While the 2022 races have yet to fully take shape, Barron said he believes Republicans may continue to hold an edge in elections for governor and lieutenant governor. Independent voters tend to sway those elections and “seem happy with having Republicans in the corner office as a check on the heavily Democratic Legislature,” Barron said.

Gov. Charlie Baker, a Republican, has yet to say whether he will seek reelection, and political observers believe Baker’s decision — he remains popular among voters — will affect rumored candidates for governor such as Attorney General Maura Healey. If Healey runs, more candidates may enter the race for lieutenant governor, said Barron.

Voters will cast ballots for the primaries in September 2022 and the general election in November 2022.