When he was interviewing in 2015 for a job with Pittsfield’s Building Maintenance Department, James Esoldi learned, to his delight, that he would be able to commute to work in a city-owned vehicle.

That long had been city policy, because as a project supervisor, Esoldi could get called to duty at any time from his home in North Adams. It saved Esoldi about $40 a week in commuting costs. In fact, being able to use the pickup truck played into his decision to take the job.

When the city abruptly halted Esoldi’s use of the pickup to commute in fall 2019, during a pitched mayoral election battle, it raised political questions. And it prompted Esoldi, a member of the Pittsfield Supervisory and Professional Employees Association, to seek relief through the state Department of Labor Relations.

Nearly a year-and-a-half after claiming that the city was wrong to unilaterally change a condition of employment for a union member, Esoldi has city-owned wheels back for commuting, albeit different ones, and a payment for his commuting costs. 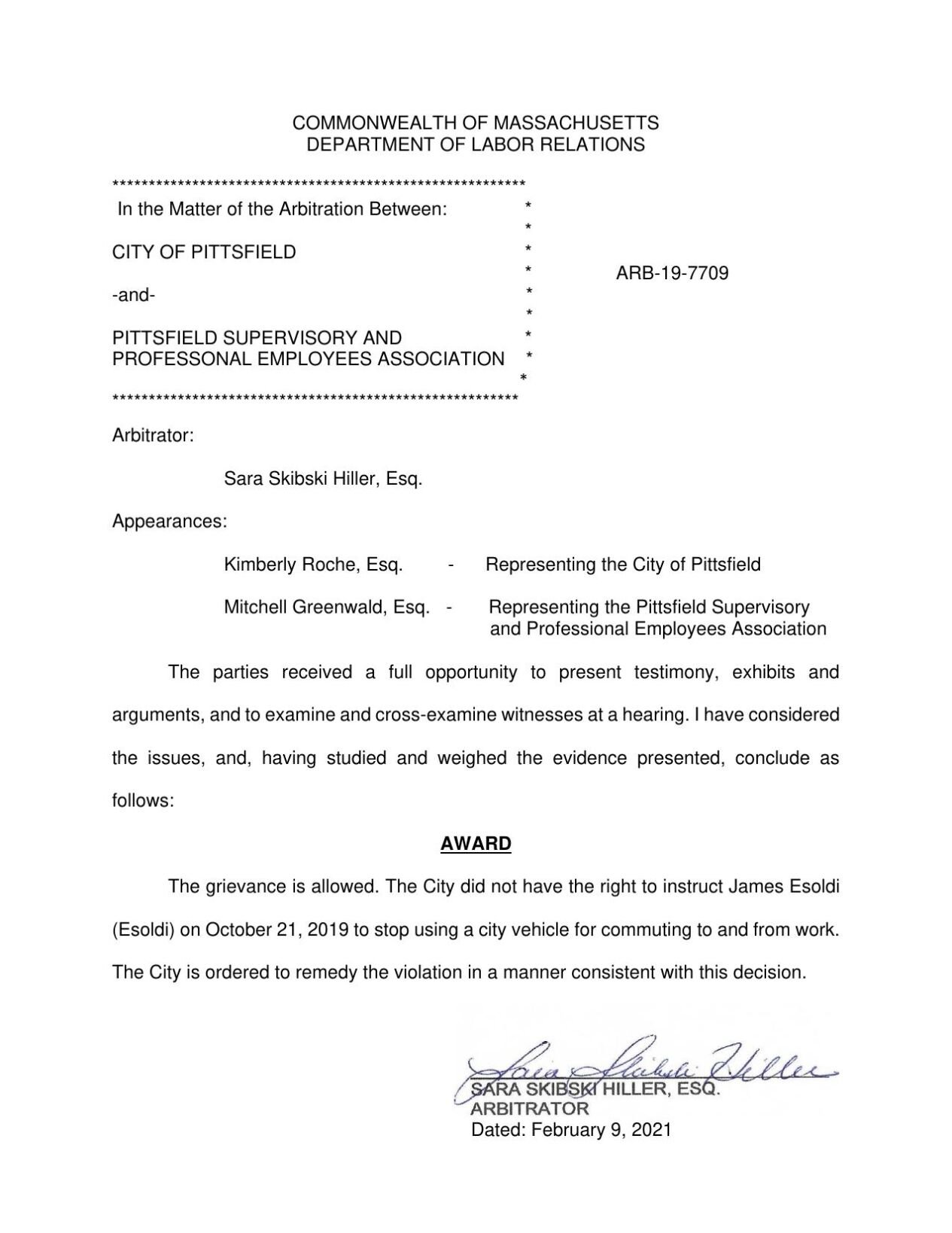 Hiller said that if it wants to change an “established past practice” like use of city-owned vehicles, it needs to take it up not with a single member of the bargaining unit, but through collective bargaining.

“The city followed all provisions outlined in the arbitration decision, including restoring rights to the city vehicle and mileage reimbursement in the amount of $6,234,” said Taylor.

Esoldi’s lawyer, Mitchell I. Greenwald, of Pittsfield, confirmed that his client received that amount, which is what Esoldi requested.

“They did restore the availability of a vehicle, though not the same vehicle that he had been using prior to its being cut off,” Greenwald said.

In his briefs to the state agency, Greenwald argued that Esoldi had been told during his interviews that he would have access to a city vehicle for commuting to and from Pittsfield, though not for personal use at other times.

Along the way, one theory of the case held that Esoldi had been punished for something he says he didn’t do: attend an election rally, using the city vehicle, for the mayor’s primary opponent in 2019.

The city said during the arbitration that the move was designed to save money. The city also claimed that Esoldi hadn’t been called out to after-hours work that much, reducing his need for a city vehicle. His last “call-out” for after-hours work came Feb. 18, 2017, about 20 months before.

But, Greenwald was able to convince the arbitrator that case law prohibits a public employer like the city of Pittsfield from deciding on its own to change a workplace condition. He also argued that Esoldi was the only one who lost use of a vehicle.

The arbitrator rejected the idea that Esoldi had been punished for attending a rally in late September held to celebrate candidate Melissa Mazzeo’s win in a Sept. 17, 2019, preliminary election over incumbent Mayor Linda Tyer.

According to the arbitrator’s summary, Filiault questioned Esoldi about his possible presence at the rally after a letter appeared on the iBerkshires website Oct. 8, 2019, alleging that a city-owned vehicle had been present at the Mazzeo rally. Though Mazzeo won the preliminary election by 290 votes, she lost to Tyer in the Nov. 5 general election.

Esoldi told Filiault that he had been asked to dismantle and store election equipment on the day of the rally, but had gone home afterward.

(The letter was taken off the website, Hiller wrote, after questions arose whether the authors provided fake names.) The city contended in arbitration that Filiault believed Esoldi’s denial and that he dropped any further investigation related to the rally.

“While the allegation brought Esoldi’s use of the vehicle to Filiault’s attention, I have no evidence before me to conclude that Filiault’s decision was retaliatory,” Hiller wrote in her decision.