SANDISFIELD — A company’s long battle for a permit to grow and process cannabis in the Berkshires advanced Monday, when the Select Board approved the plan, and set a number of conditions.

Those include control of odors and noise, as well as security, hours of operation and use of 100 percent renewable energy. A surety bond to force restoration of potential damage to roads could face legal hurdles, said board chairman Brian O’Rourke, but Sama Productions LLC is planning to take photos of the road before and after and to restore it to its initial state.

Most conditions on the town’s special permit already are required by the state Cannabis Control Commission, the licensing agency, said board member George Riley.

Sama plans 23 organic greenhouses totaling more than 100,000 square feet, and a 5,000-square-foot building for processing plants. The company purchased 60 acres, and will use 46 of those at Abbey and Town Hill roads.

The project is hailed by some residents who want to see much-needed town revenue that begins the first year with 3 percent on the first $5 million of annual gross sales, and $15,000 in annual donations to the town.

But, Sama hit a wall of resistance from other residents, who fear that an industrial enterprise here will harm property values, the environment and the town’s character. They say they aren’t anti-pot, but view this plan is outsize and inharmonious. 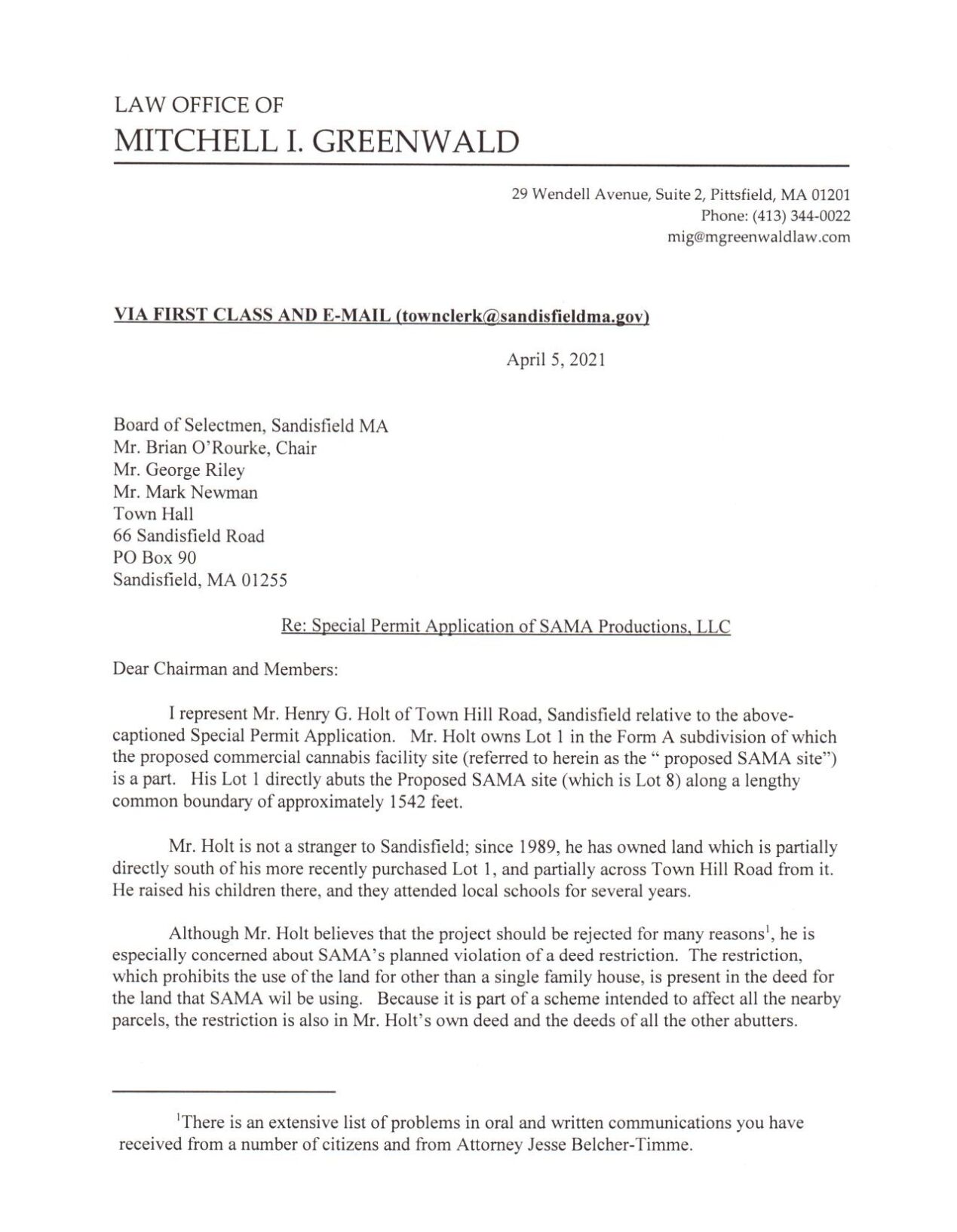 “What this proposal is doing is just dipping into my retirement,” said abutter Henry Holt, whose attorney sent a letter to the Select Board on Monday. “The math is clear.”

Resident Alex Bowman said that, in a way, the project is “taking money from the abutters and shifting it to the town.”

“I just love the land, and we’ve been dreaming about getting a house on this land,” said abutter John Riedman. “What’s now a little quiet country road would be an industrial site.”

Celina Rella and her husband bought abutting land in January to “build our futures.” She said the seller led them to believe what is now Sama’s lot would be sold to the state, and that they only received notice of Sama’s plans two weeks ago.

Sama’s parcel has a deed restriction that its principals, and the town, say is between them and the seller. The restriction limits building to single-family homes. Attorneys for abutter Holt and other residents say this should, in part, disqualify the project.

Resident Edward Brozman said he felt that the company was shrouded in mystery. But, Bill Heck, one of the principals, said that’s not possible under the scrutiny of state regulators.

“If your concern is whether or not we are upstanding businesspeople, you can rely on the state to peel that onion as deeply as possible,” he said.

Others said the board should delay the vote until annual town meeting May 15.

Board member Riley gave an impassioned speech about development, and how Sama’s plan has awoken residents, who did not oppose, for instance, a nearby logging project that took out 250 acres and thousands of 100-year-old trees.

“A solid year of chain saws roaring,” he said, noting that the logger made money and the town received not a penny. “Where were all these Town Hill [Road] people when all this was going on literally under their noses?”

Riley suggested that all development be held to the same scrutiny, and that even construction of single-family homes involves destruction.

Sama previously was incorporated as Fulcrum Enterprises LLC, which sought a special permit for a slightly smaller operation in the Housatonic area of Great Barrington. Resistance by future neighbors there prompted the company to withdraw its permit application.

SANDISFIELD — "Dismayed and heartbroken" residents opposed to a commercial greenhouse plan that was approved last month have started a Change.…