Activist and scholar Angela Davis addresses the audience Sunday, during the remote “New Pathways” social justice conference organized by the Lee-based nonprofit Bridge. Criticizing a law enforcement system that she described as a “prison-industrial complex,” and one responsible for the disproportionate incarceration of Black people, Davis offered housing, education and jobs as some paths through which reform could lead to more equitable systems. 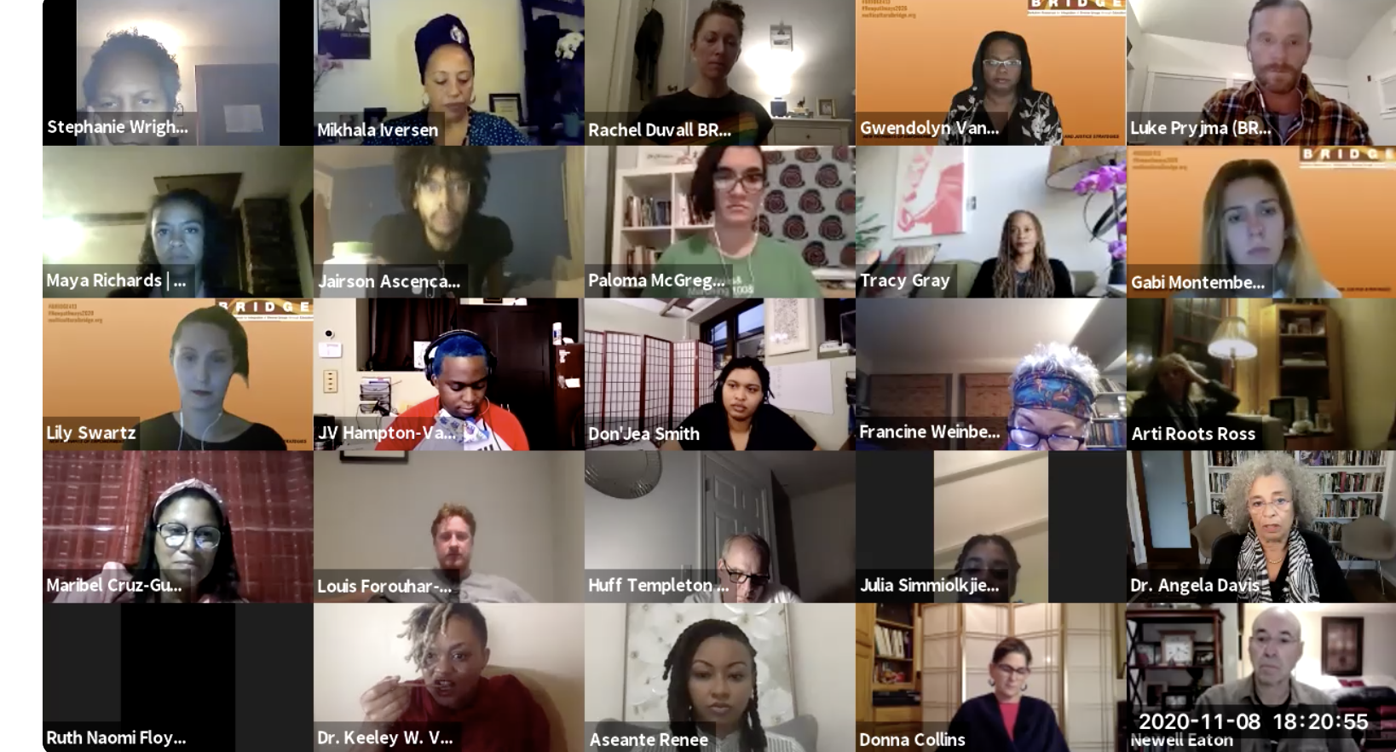 About 200 people attended a Sunday keynote address on Zoom delivered by activist and scholar Angela Davis, during the “New Pathways” social justice conference organized by the Lee-based nonprofit Bridge.

As communities begin to contend more seriously with racial injustice, what’s next for those seeking more equitable societies?

That was the question taken up in a social justice conference organized by the Lee-based nonprofit Bridge, which held various events on Zoom from Friday through Monday. Attendees explored methods to work toward social change amid a coronavirus pandemic that disproportionately has hurt Black communities, and a spike in recognition of police violence after the killings of George Floyd and Breonna Taylor.

And, while some celebrated news that Joe Biden will succeed Donald Trump as the nation’s next president, several speakers — many of them were Black women — stressed that a return to the familiar would not be good enough.

“The New Pathways program is about creating a space to internationally acknowledge and build a road that does not lead us back to normal, because normal has been so lethal for so many,” said Gwendolyn Hampton VanSant, Bridge’s CEO and founding director. “2020 has brought us a clearer vision that we can’t go back, only forward.”

Activist and scholar Angela Davis echoed that sentiment in a Sunday keynote, addressing nearly 200 people on the Zoom call.

As the slogan “Black Lives Matter” and other anti-racist ideas have moved, Davis said, “from the sidelines of established political discourse to the center,” part of the task is maintaining the radical and transformative intent of those ideas.

Criticizing a law enforcement system that she described as a “prison-industrial complex,” and one responsible for the disproportionate incarceration of Black people, Davis offered housing, education and jobs as some paths through which reform could lead to more equitable systems.

“Abolition is not primarily about the negative act of elimination and revocation … but rather it is about a process of re-creation and building something new,” Davis said. “We do not get rid of the old and assume that the new will be constructed on the same foundation as the old. We create new foundations, new footprints, new institutions, new societies.”

Art, she argued, also must play a leading role in envisioning a move away from the system of “racial capitalism” that she said has devalued Black lives.

“What is so important about the Black liberation movement is not only the fact that we have survived that repression, but rather that we have also learned how to create and to produce beauty within a process designed to dehumanize Black people,” she said.

While those seeking social change often emphasize organizing, a panel Monday shifted the focus to culture and community-building.

“What we first must do is get clear about who we want to be,” said panelist Anasa Troutman, an artist and cultural strategist. “What is the core value that we want to drive us? Because right now, the core value that drives us is myopic individualism and hyper-capitalism. … This man who is about to leave office — he’s not causing anything. He is very clearly reflecting who we are as a country.”

Redistributing resources must be another priority, Troutman said.

At odds with a white entrepreneur over the future of a Memphis, Tenn., building that holds historical significance to many in the city’s Black community, Troutman raised $1.5 million over six months to purchase the building.

“The lesson that I learned is, if we don’t have sovereignty over the resources, then our dreams, our visions, our strategies do not matter,” she said.

VanSant said she hoped attendees left the conference energized and inspired, and she urged vulnerability, energy and openness to change.

On Sunday and Monday, she recited a quote from a speech given by Kamala Harris after Harris became the first Black woman to be elected vice president: “Dream with ambition, lead with conviction and see yourselves in a way that others may not simply because they’ve never seen it before.”

“We don’t know what our future is going to look like if we do it right,” VanSant said.