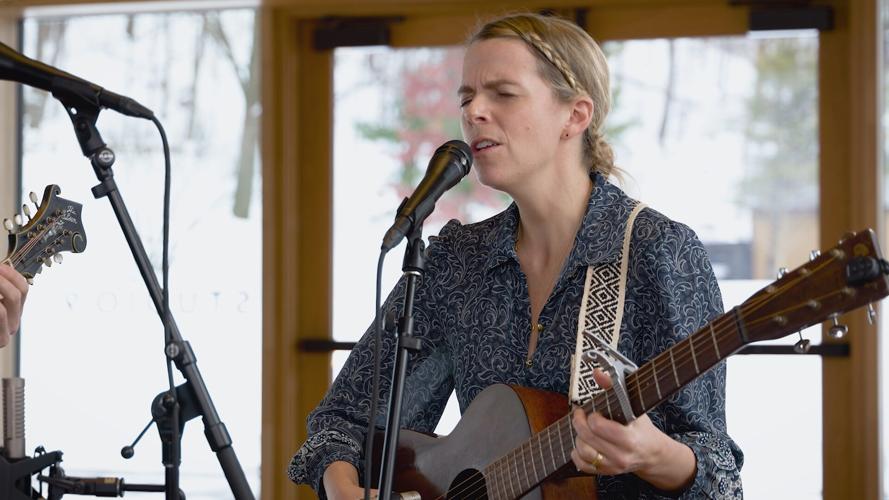 Singer/songwriter Aoife O’Donovan, shown during a recent session at Studio 9 in North Adams, will release a new single, “Transatlantic,” today. The song is inspired, in part, by her travel to Ireland and a longing for that which we don’t have, she said. 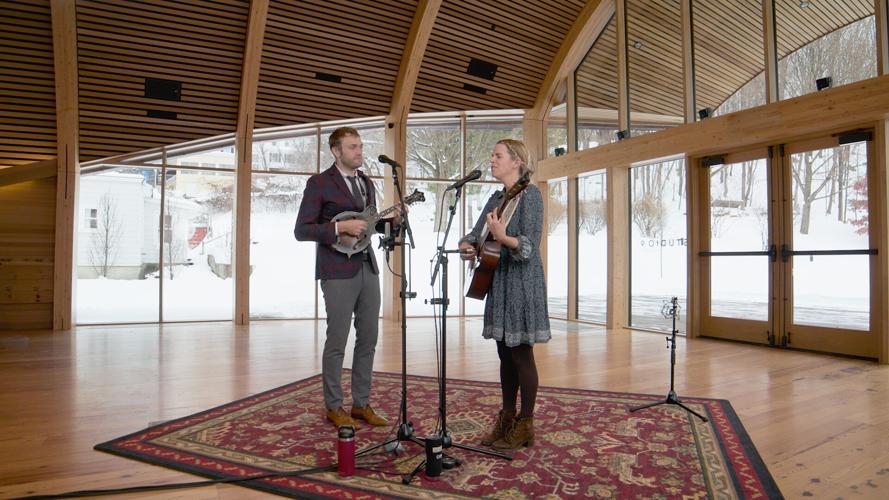 Aoife O'Donovan and Chris Thile record a streaming concert at Studio 9 in North Adams, as part of the Celebrity Series of Boston. The ticketed stream airs through Thursday evening.

Singer/songwriter Aoife O’Donovan, shown during a recent session at Studio 9 in North Adams, will release a new single, “Transatlantic,” today. The song is inspired, in part, by her travel to Ireland and a longing for that which we don’t have, she said.

Aoife O'Donovan and Chris Thile record a streaming concert at Studio 9 in North Adams, as part of the Celebrity Series of Boston. The ticketed stream airs through Thursday evening.

Aoife O’Donovan might have grown up in Boston, but these days, the singer/songwriter is feeling a strong passion for Western Massachusetts, too.

“The Berkshires, when you’re from Eastern Mass., I think the Berkshires are these magical hills to the west,” said O’Donovan, speaking from Florida. “You get on the ‘Pike and you drive until almost the end and you’re just kind of on a different planet.

The inspiration that O’Donovan draws from the region prompted her and her husband to purchase a second home in Berkshire County, where they spent six weeks during the holidays. And North Adams this week provided the perfect setting for O’Donovan to reconnect with a favorite performance space and a favorite musical friend while trying to inject some normalcy into a music industry turned upside down — for performers and audiences alike — by the COVID-19 pandemic.

The online performance and question-and-answer session featuring O’Donovan and mandolin player Chris Thile, part of the Celebrity Series of Boston, premiered Friday and is available through 7 p.m. Thursday. It was prerecorded at Studio 9, whose home is The Porches Inn at the Massachusetts Museum of Contemporary Art.

Log on to watch this gig and you’ll learn plenty about O’Donovan, a Grammy winner who was the featured vocalist on the album “Not Our First Goat Rodeo,” featuring Thile, Berkshire County resident Yo-Yo Ma, Stuart Duncan and Edgar Meyer. The album, recorded at James Taylor’s studio in Berkshire County, was released in June, as a sequel to 2011’s “The Goat Rodeo Sessions”

O’Donovan, who said her grandmother was descended directly from Salem “witches,” also is a co-founder of the bands I’m With Her and Crooked Still. She performed on the public radio programs “Live From Here,” which was hosted by Thile, as well as that show’s predecessor, “A Prairie Home Companion.”

And on St. Patrick’s Day today, she will offer even more musical perspective on the pandemic, when she officially releases a new single, “Transatlantic.”

O’Donovan also has been a steady presence at FreshGrass, the annual roots and bluegrass music festival at Mass MoCA. That is what led her to The Porches and Studio 9, where she previously has recorded.

This time, Thile and his family were at O’Donovan’s place, with all concerned tested for the coronavirus and secure in their “pod,” for a separate musical project.

The timing aligned with the Celebrity Series gig and O’Donovan’s relationship with Studio 9 set the stage, literally. Despite the strange circumstances consuming us all at the moment, she said, “It felt like a real concert.”

“The crew there was amazing. The sound in that room is just gorgeous, and also, it looks so great,” she said. “I love doing live studio performances from studios that have such a vibe.”

Of performing with Thile, O’Donovan said, “I think anybody who’s played with him would say this: He’s all ears; he’s a leader for sure, but he’s also listening so intently to what other people are doing and playing off of it, and I think that’s what sets him apart.”

So, as the viewing of the Celebrity Series performance winds down in advance of Thursday evening, momentum likely is to be just building for “Transatlantic.”

The song revolves around a sense of yearning that so many can relate to, a year into an enduring pandemic. And it was commissioned by the Irish Arts Center in New York City, as part of its Grasta commission series, in response “to the chaos of the moment, and the idea of finding grace in uncertainty.”

The lush recording of “Transatlantic” and compelling video speak to O’Donovan’s Irish roots — her father was born in Ireland. The song was inspired, in part, by her travel to Ireland and a longing for that which we don’t have.

“Hold on to whatever will be,” she sings with her musical guest, Kris Devers of Scotland. “And we’ll raise our glasses high.”