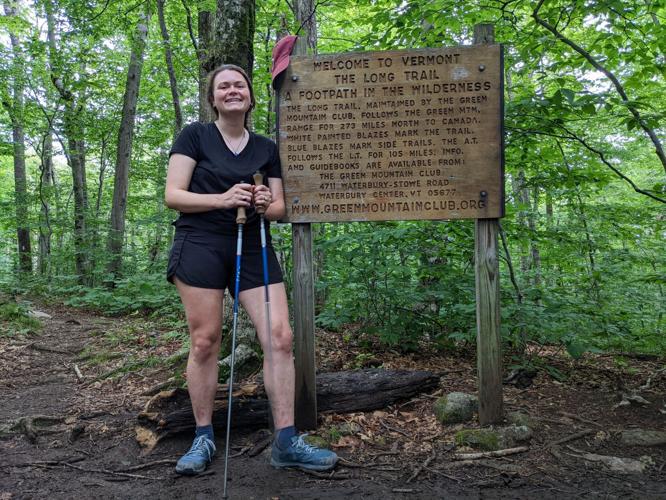 Greta Jochem, a news reporter for The Berkshire Eagle, at the end of her 90-mile hike north along the Massachusetts section of the Appalachian Trail. She began the hike Aug. 1 and finished Wednesday. 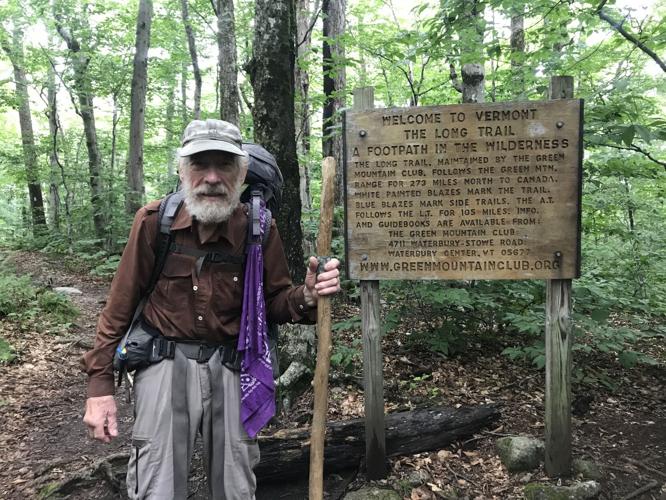 Tennis Dison, 80, is hiking the Appalachian Trail and crossed into Vermont on Wednesday. 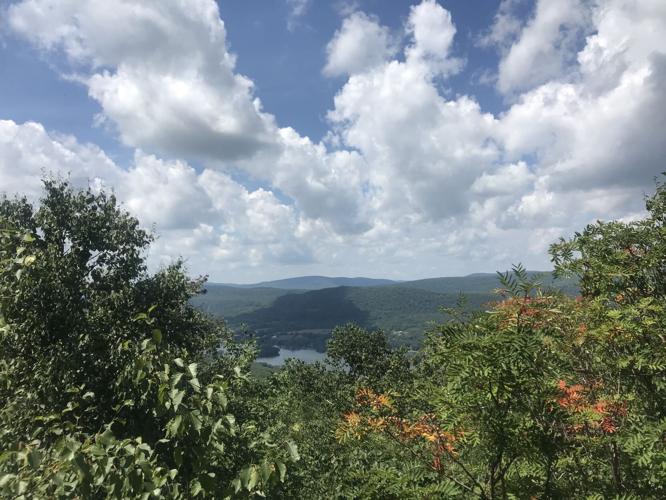 The view from Cheshire Cobbles. 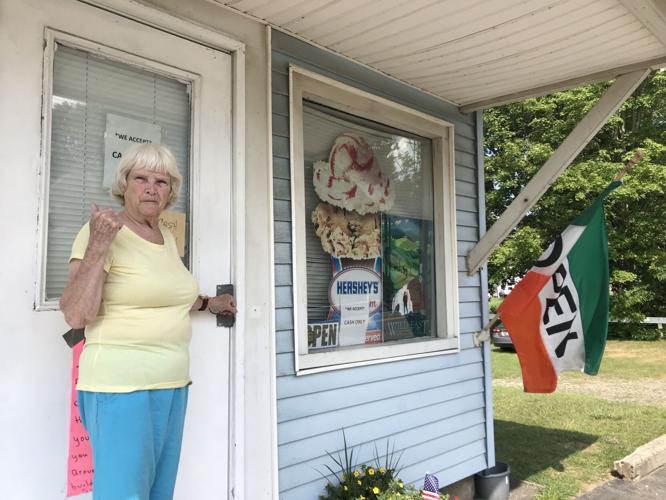 Diane Ramer, who opened Diane's Twist decades ago, stands at the ice cream shop next to the Appalachian Trail. 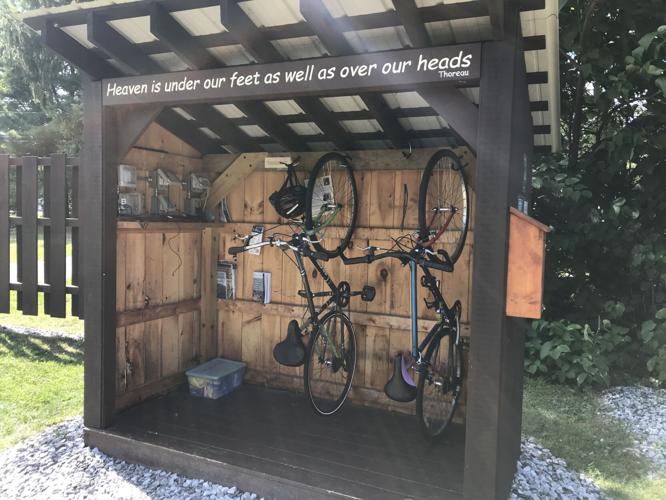 A shed with bikes and a charging station for hikers at Father Tom Campsite in Cheshire. 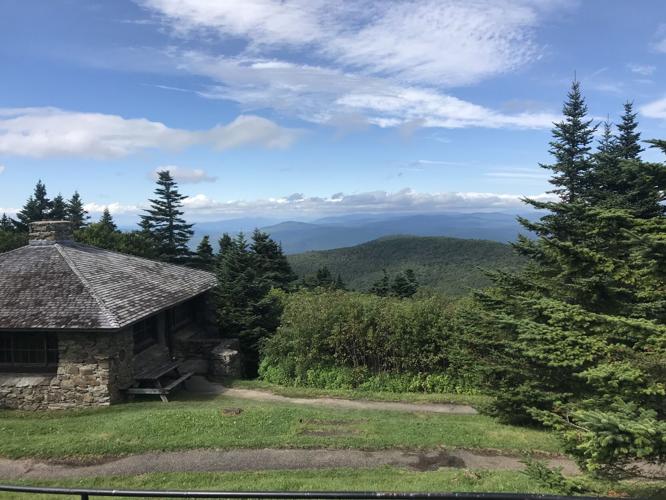 The view from Mount Greylock on Tuesday. 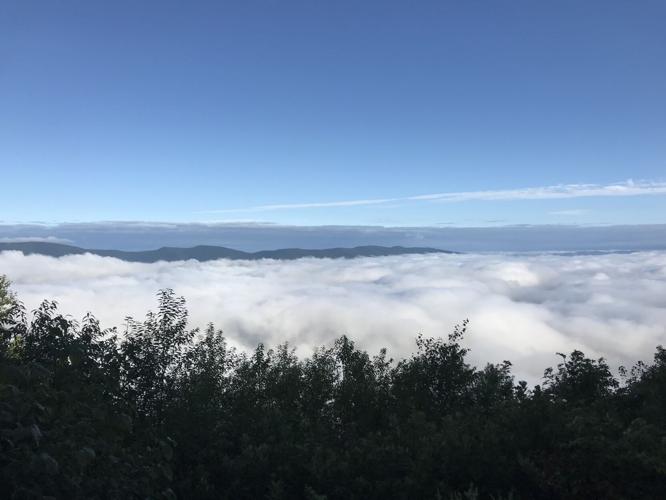 The view from Mt. Prospect on Wednesday. 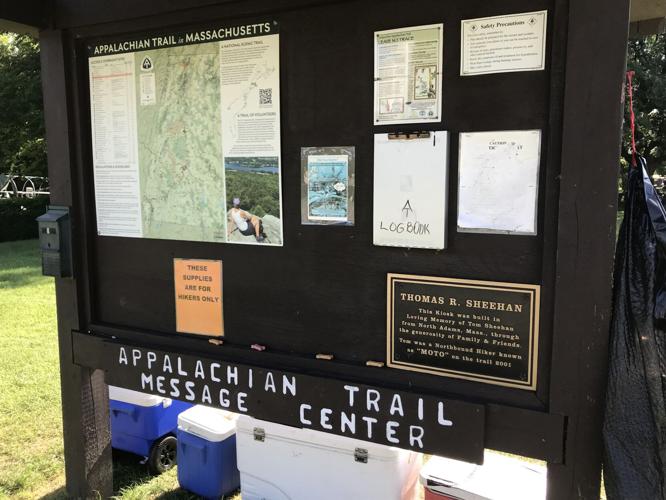 A kiosk for hikers in North Adams. 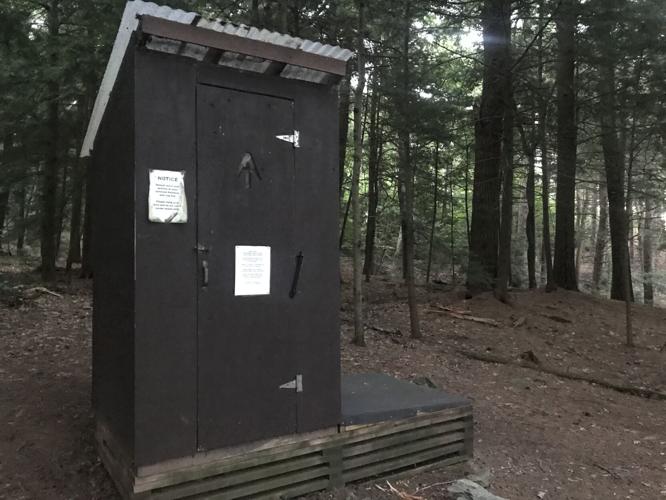 A privy at a campsite on the Appalachian Trail in the Berkshires. 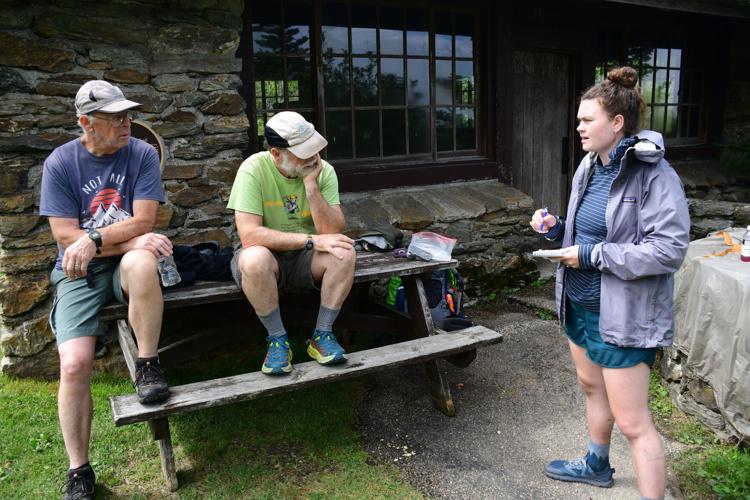 Berkshire Eagle reporter Greta Jochem interviews Jim Pelletier of Pittsfield and Cosmo Catalano of Williamstown about the work of volunteers who maintain the Appalachian Trail in Massachusetts during an interview on the summit of Mount Greylock.

Berkshire Eagle reporter Greta Jochem hit the Appalachian Trail Aug. 1 at the Connecticut line with plans to hike the state's 90-mile segment. In this fifth and final report, she describes a slippery ascent of Mount Greylock and other outtakes from her trail notebook, including a final memorable encounter.

I had hiked Mount Greylock before, but never with a heavy backpack — and never after coming more than 70 miles along the Appalachian Trail.

As I trudged up the mountain, mid-morning Tuesday, the sky darkened. Rain felt inevitable.

When it started, a few miles from the summit, it felt good. Then it just felt cold. I grabbed my rain jacket.

I walked carefully, trying not to slip on a rock, or step in a puddle. That morning, I had told a coworker at The Eagle, who was meeting me at the summit, that all I needed her to bring along was a cold drink.

Forget that! I ducked under a tree to text her and ask if she had a towel instead. The trail several times crosses a road that goes up Greylock. For a second, I considered asking someone for a ride. I didn't.

I walked until I reached the top, shrouded in fog.

Ice cream and mail in Cheshire

Let me back up a few miles, then tell you how my journey ended this week.

"Wild East," reads a poster on the window of Diane's Twist in Cheshire. "Appalachian Trail."

After passing the Cheshire Cobbles, the northbound trail goes through the town and passes the ice cream and sandwich shop. No matter if a hiker is going north or south on the trail, they walk by the shop, said Diane Ramer, its namesake, who I visited with on the porch of the shop.

Twenty years ago, she started the business and later sold it to her daughter, Alison Warner. She tells me that "a very high percentage" of the shop's patrons are hikers, or those on the Ashuwillticook bike path, which runs right by. So much so that when it gets colder in fall, the shop closes.

Before the heat broke this week, one hiker stopped for a milkshake and happily sipped it at a nearby picnic table.

I too wanted ice cream, but didn't have cash. No plastic taken here. I walked across the street to the U.S. Post Office, greeted by a welcome blast of air-conditioning, and bought a stamp hoping to get cash back, but the machine did not work. At least the stamp was a light addition to my backpack.

Some hikers told me they send themselves items through the mail. Others don't want to bother working around the days and hours a post office is open. Sometimes, hikers will send packages to Tom Levardi's house in Dalton, described in my last dispatch.

Outside the post office, two hikers sitting in the shade were surprised to learn I was only hiking Massachusetts and not the entire trail, as they were. You seem like "hiker trash" already, one said. I later confirmed this is hiker slang for a compliment.

A few miles on, I find ice cream at a store that takes cards, the Dollar General on Route 8, just north of Cheshire center. At least three other hikers are perusing the shelves for food.

That evening, I spend the night at the Father Tom Campsite.

"He was a great supporter of the hikers," Eileen Quinn, Cheshire's Appalachian Trail community coordinator, said of Begley. Hundreds of hikers have stayed there since it opened, Quinn told me while we sat at the site Monday afternoon, in a patch of shade.

People had tents set up. A few stretched out in hammocks strung between re-purposed electrical poles. "It's a respite for hikers," Quinn said.

The site has water, a spot to charge phones and a shed for bikes that hikers can use to get into town. Though a few stores are not far away, the bikes are handy when your feet are tired. "They don't want to walk anymore," Quinn said. One hiker raved about the charging station, saying it was one of the best he'd seen on the trail. I charged up.

When Quinn heard about the "trail community" program in 2017, she thought it was an obvious goal. "The trail comes right through our town," she said. "It just seemed like it made sense to have that recognition to be more official, putting Cheshire on the map as an Appalachian Trail Community ... Doing that eventually evolved into this great campsite over time."

Before setting out, I knew I liked hiking and camping. Good thing. But I had only been out for a few days at a time — and never alone. Would I like it? I wondered.

I've found this trek deeply satisfying. It's been unlike anything I have ever done. I look forward to another time in my life when I can do it again.

As I began, I was nervous about the stories I'd find and tell.

What will write about? I asked my editor. Just hours after I started, another hiker asked me what I was going to focus on. I said I wasn't sure. Turns out, that's never been a challenge out here. I found a trove of interesting people and stories. As a journalist, I'm reminded that the best stories are often found just by being curious and talking to regular people "in the field." Or the forest.

While walking over the past 10 days, I benefited from signs, wooden bridges and other structures on the trail that made it easier to traverse. How do those get there? Well, volunteers do a lot of the work.

"Essentially, everything you see out there that didn't grow naturally, the volunteers were involved in that," Jim Pelletier, a member of the AMC Western Massachusetts Appalachian Trail Management Committee, tells me.

Pelletier and his colleague Cosmo Catalano met me at the top of Mount Greylock, when I got there Tuesday. After my first few pieces about the trail went online, I got emails suggesting I talk to these two.

Their group taps help from more than 75 volunteers. It cares for all 90 miles of the trail in Massachusetts, including its campsites.

He spotted vandalism on the Appalachian Trail last week. Meet Cosmo Catalano, a volunteer who helps safeguard the trail in the northern Berkshires.

The group also helps track rare plants, installs stepping stones, removes invasive plants and repairs shelters and boardwalks. It is working on a large project to get a new boardwalk through a grassy area of the trail in Tyringham, Catalano and Pelletier tell me with excitement.

At conferences with other groups that manage the trail, talk often turns to one subject during social time. "Within 10 minutes, we're talking about privies," Catalano said.

I can say from experience the campsite privies — outhouses — are very useful.

The outhouses turn human waste into compost and are designed for solids, since too much liquid can disrupt the composting process. Or so I learned from signs on the privies. Periodically, the outhouse needs to be moved to a different spot, which the group does. Though they sound rustic, they smell better than your average port-a-potty. Some even offer good reading material — like comics about outhouses or, at the Shaker Campsite, information about the history of the land.

As I made the descent Wednesday from Mount Greylock, clouds covered Williamstown from a viewpoint on Mount Prospect.

A dramatic vista to start my last day.

From there, the Vermont border was only about six miles away. Rest was within reach.

I hiked down a steady decline through the woods. Near a road crossing, I passed a cooler that a "trail angel" had stocked with water. Hikers coming in the opposite direction took note, saying they appreciated that kindness.

As in Dalton, the trail suddenly means walking on a sidewalk. I'd reached North Adams, happy to be back home. I had never noticed the white blazes, or marks, that are painted on telephone poles on Phelps Avenue.

At Greylock Elementary, I found the hiker kiosk stocked with snacks and drinks that Kevin Boisjolie and Jim Wolfe told me about last week. I checked the logbook. "Tiny Dancer passing through!" one message read. "Thank you for the generous trail magic."

I was home, but not yet home. I still needed to trek to the Vermont border. When I'd started this walk, on Aug. 1, I thought that after reaching the Vermont border it would be simple to double back and walk all the way home. My apartment in North Adams is a few miles from the trail. I scrapped that plan once I realized that once you get to the Vermont border, the nearest road crossing is about a four-mile hike away. I hoofed it along the trail, but got a ride home from there.

A brief trip to Vermont

But let me tell you about the real finish line.

At the border, feeling victorious, I stopped to get photos in front of a large sign welcoming people to Vermont. Then, Tennis Dison, 80, hiked by. I had been told days earlier about an older man named Tennis on the trail. I was thrilled to find him moments before my trip ended.

“The real story here is not me, it’s the people I've met," he told me, wooden walking stick in hand. Yes, Tennis is his off-trail name, too.

Dison started in Georgia in May 2021. He stopped after he injured a knee, but picked the route back up this year. It's not his first time he's done the trek. In 2007, he completed the trail.

What is his journey about? "Not to get away from people," he told me. "To get to some of the nicest people you’ll ever meet."

Once, someone left a pastry and a $100 bill outside his tent. Recently, camping in the yard of "the cookie lady" in Washington, the family gave him a ride to a store to get new shoes. "In real life, that seldom happens," he said.

Dison seemed content to be out walking in the woods and meeting people. He asked me to friend him on Facebook. We took a selfie together at the border.

I had the same question for him as I did for everyone I met hiking the whole trail, more than 2,000 miles: Why?

Dison said he gets the question often, and by now, has his answers ready. As he gets older, it's one way he is trying to stave off memory loss. "I haven’t gotten lost yet," he said. "I consider myself terminal ... as far as maybe I have six years left." He adjusts that. "Maybe two," he said. "What would you do in your last years? ... Here I am."