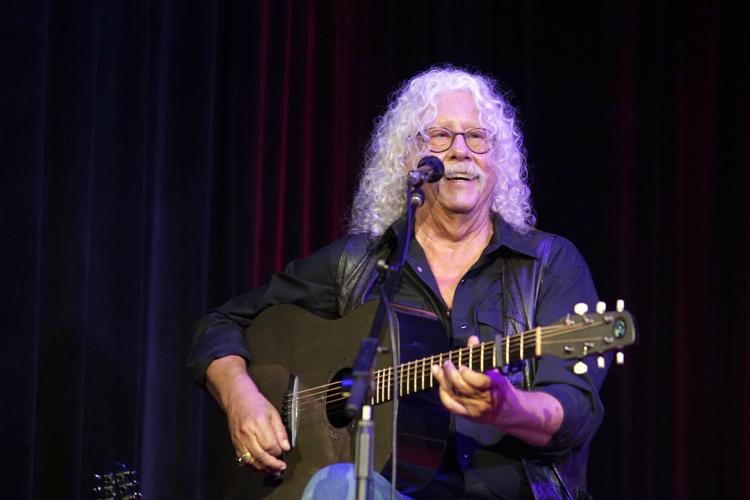 Arlo Guthrie performs with Shenandoah in 2018, at a concert at The Guthrie Center in Housatonic.

A look back at the original Eagle story about Arlo Guthrie's arrest.

Their trash adventure made music history. Arlo, Rick and Alice plan their first Thanksgiving together in 57 years

Imagine this. You’re 18 years old and you’re crashing at a friend’s place for Thanksgiving weekend. Your friends are preparing the most delicious meal, sure to be the best you’ve had in a long time. But, before you dig in, you’re thinking about some way you could repay them.

You take a look around the room and it hits you: Lend a hand by cleaning up the place a bit by taking old pieces of furniture, scraps of wood and cardboard into your van and disposing of it for them.

Sounds like a fair deal, a meal for helping around the house. And so you set off, a quick errand.

Arlo Guthrie and Marti Ladd got married in a quiet Florida celebration. Then there was a mishap

Problem is, when you arrive at the dump, you find it's closed for the holiday. Shoot. Now, you can’t really take all this garbage back with you … so, what do you do? Looks like someone else had the idea to dump their trash not too far from here … what’s a little more added to the pile?

So, you and your buddy toss the rubbish down the side of a 15-foot cliff and head on back to your friend’s place. The deed is done and all is well. Until the phone rings. It’s Officer Obie, and he has traced the trash back to you. Trouble.

This is the story of the time Arlo Guthrie and his friend, Richard Robbins, were arrested for littering in Stockbridge on Thanksgiving weekend in 1965. The two friends were guest’s at Alice and Ray Brock’s home, formerly the Trinity Church and now known as The Guthrie Center, an interfaith church established in 1991 in Housatonic.

This story is immortalized in a song about 18½ minutes long, and has become a staple on America's Thanksgiving playlist.

Last year, USA Today caught up with Robbins in an interview.

“We did something really stupid 56 years ago when we were teenagers, and much to my surprise it’s still in the news every Thanksgiving,” Robbins says in a USA Today video. “Thanks to Arlo and his brilliant song: Alice’s Restaurant … They busted us for dumping some garbage, but it wasn't after the Thanksgiving dinner, we were there and we helped Ray clean out the church. And it was mostly, you know, pieces of wood and cardboard. Everyone thinks it was household garbage but it wasn’t.”

Robbins and Guthrie were arrested, fined $25 each and ordered to pick up all of the trash, including what they dumped and what was already there. The Berkshire Eagle article in 1965 reports “the junk included a divan [a low sofa] plus nearly enough bottles, garbage, papers and boxes to fill their Volkswagen bus,” noting that the trash was dumped into the Nelson Foote Sr. property on Prospect Street in Stockbridge. It was Police Chief William J. "Obie" Obanhein, of Stockbridge, who made the discovery and contacted the teens.

"The bottom line is we were a couple of dumb kids from the city and didn't know anything about dumps because in the city, a garbage truck comes and takes your trash away," Robbins told USA Today. "Not to make any excuses, but we just didn't know any better."

Now, more than 50 years later, the song “Alice's Restaurant Massacree" resonates every Thanksgiving as Americans tune in to hear it on the radio, look it up on the internet or drop the needle on the record player.

"Alice’s Restaurant" is Arlo Guthrie’s debut album, released two years after the incident in 1967, and it made it to No. 17 on the Billboard charts, since then selling more than 1 million copies.

"I think it’s just one of those funny, crazy coincidences that you have an event that takes place on Thanksgiving, therefore it becomes associated with the holiday," he told the magazine. "If I go back and look at the hits to the website for example, they will spike one day a year. I always thought, 'Hey if they’re gonna play one song of yours on the radio one day a year, it might as well be the longest one you wrote!' ”

Guthrie, who has retired from touring and lives in the Berkshire County town of Washington, wrote the song in the two years that followed this incident, which led to his prohibition from being drafted in the Vietnam War.

As Guthrie recalls in the song, he tried to dodge the draft by showing up to his examination hung over and tried to convince the psychiatrist he was unfit to serve. But, it was because he had a criminal record of littering that he was deemed “morally unfit” to serve.

“I mean I'm sittin' here on the Group W bench / 'Cause you want to know if I'm moral enough join the army, burn women, kids, houses and villages after bein' a litterbug." he sings. “He looked at me and said, 'Kid, we don't like your kind, and we're gonna send you fingerprints off to Washington.'"

The Guthrie Center holds a Thanksgiving dinner for the community each year. Reservations are appreciated, and can be made by calling 413-528-1955.