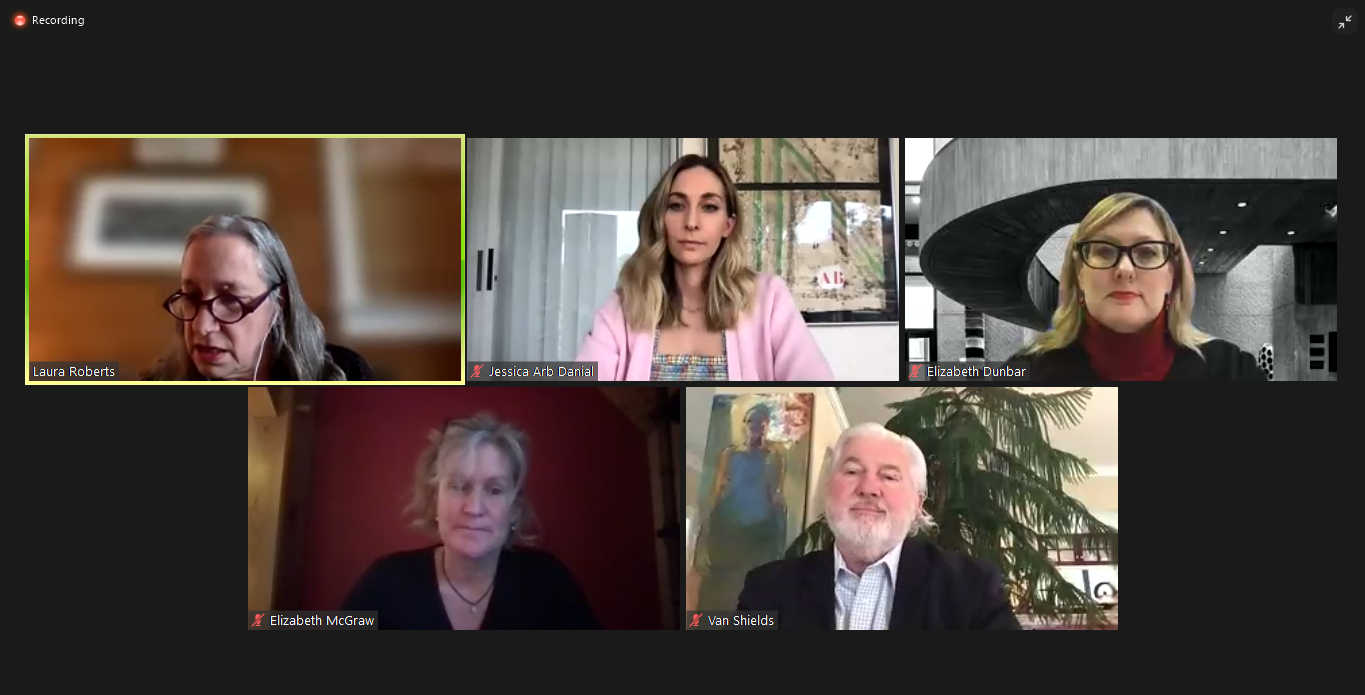 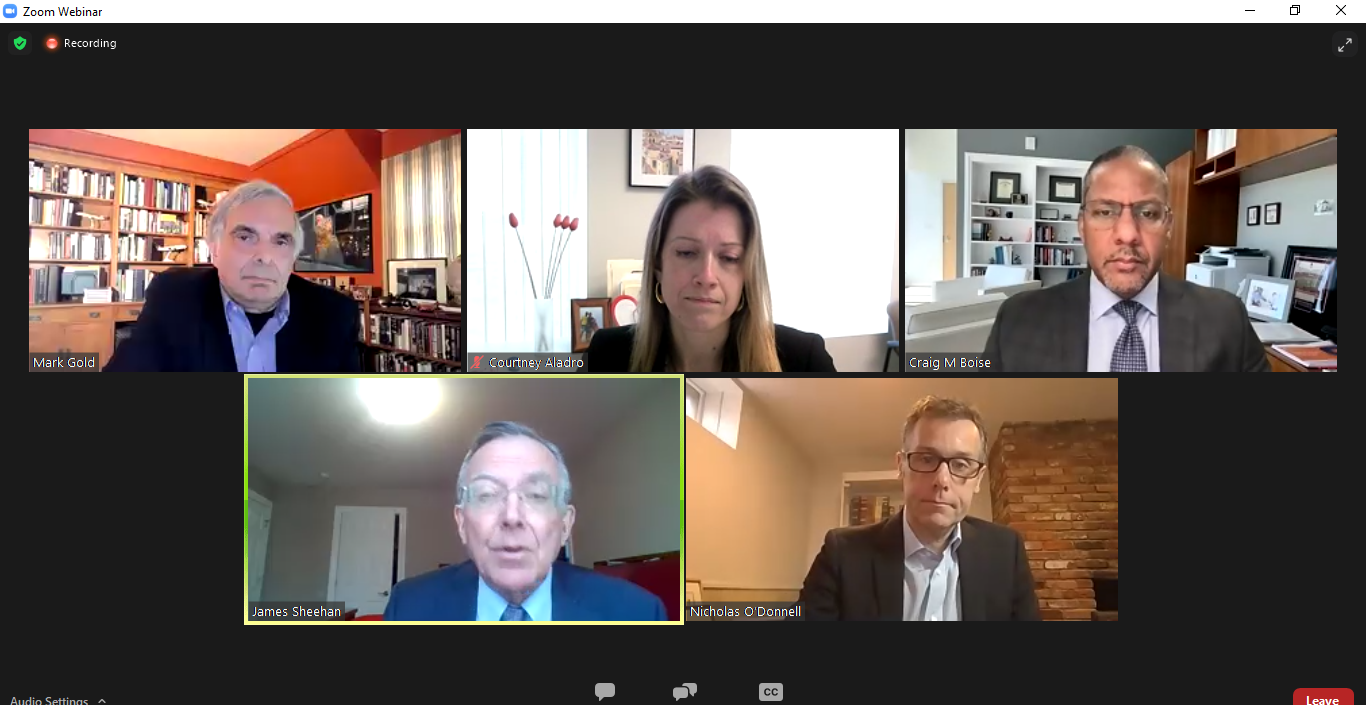 “Legal Issues, Strategies, and the Role of the Courts” panel members are, top row: Mark Gold, the Pittsfield attorney who represented the Berkshire Museum during its 2018 deaccessioning; Courtney M. Aladro, Massachusetts assistant attorney general and that office's chief of the nonprofit organizations/public charities division; and moderator Craig M. Boise, dean of the Syracuse University College of Law. Bottom row: James Sheehan, chief of the New York attorney general's charities bureau; and Nicholas M. O'Donnell, partner at Sullivan and Worcester, LLP, which represented three Lenox residents who brought a lawsuit against the Berkshire Museum.

“Legal Issues, Strategies, and the Role of the Courts” panel members are, top row: Mark Gold, the Pittsfield attorney who represented the Berkshire Museum during its 2018 deaccessioning; Courtney M. Aladro, Massachusetts assistant attorney general and that office's chief of the nonprofit organizations/public charities division; and moderator Craig M. Boise, dean of the Syracuse University College of Law. Bottom row: James Sheehan, chief of the New York attorney general's charities bureau; and Nicholas M. O'Donnell, partner at Sullivan and Worcester, LLP, which represented three Lenox residents who brought a lawsuit against the Berkshire Museum.

SYRACUSE, N.Y. — What will be the long-term impact on museum collections of the temporary loosening of rules around deaccessioning and selling of art to raise money? And, are collections even necessary?

Museum professionals, lawyers, professors and authors offered up myriad opinions of how deaccessioning is being used, should be used and could be used, during “Deaccessioning After 2020,” a two-day online symposium sponsored by Syracuse University’s College of Law and Graduate Program in Museum Studies.

“I believe we are only looking at the shiny tip of the iceberg peeking out of the sea of pressing issues; ignoring the very real mass of danger below the surface. Deaccessioning is perhaps the wrong answer for the wrong question,” said Kaywin Feldman, director of the National Gallery of Art, who kicked off Thursday’s symposium.

Instead, she said, museums should be addressing the three primary strains that have led to the current deaccessioning discussion: unstable growth, coupled with undercapitalization; an existential environmental crisis; and a reluctance to make meaningful change.

The Association of Art Museum Directors loosened its rules around deaccessioning in April, in response to financial struggles caused by the coronavirus pandemic — allowing for the proceeds of art sales to be used for direct care of collections and the use of restricted endowments, trusts or funds for operational expenditure through April 2022.

Before April 2020, proceeds from sales could not be used for operating or capital expenditures — such use resulted in censure of the offending museum, cutting it off from collaborations and loans from association institutions — as was the case with the Berkshire Museum in 2018.

The Berkshire Museum deaccessioning, which raised $53.25 million, was a focal point of the symposium’s first day. Van Shields, former executive director of the Berkshire Museum, and Elizabeth McGraw, former chairperson of the board of trustees, joined Everson Museum of Art Executive Director Elizabeth Dunbar and board President Jessica Arb Danial in a panel discussion on “Regional Museums Making Difficult Decisions and Expanding Horizons.”

Both museums held controversial sales of what critics say were the most valuable works in their collections. The Everson recently sold Jackson Pollock’s “Red Composition, 1946” for $12 million through Christie’s auction house. The Berkshire Museum used its proceeds to shore up its budget, establish an endowment and make capital repairs.

“In terms of our collection and our crisis, we were running out of money. The reality is, we couldn’t even take care of our collection, never mind diversifying it,” McGraw said, listing off issues caused by deferred maintenance. “We didn’t even have enough money to insure our collection properly.”

The Everson’s reasons for selling the Pollock were based on the museum’s decision to bring its collection, 90 percent of which was authored by white men, closer to the demographics of Syracuse, a community with a population that is 50 percent Black and Indigenous, Danial said.

”The funds from the Jackson Pollock don’t go to fixing the roof. We can only use the proceeds for two purposes: acquisition of art and direct care of the collection,” Dunbar said.

Friday’s keynote speaker, Christopher Bedford, director of the Baltimore Art Museum, said a museum’s collection should be used as a catalyst for change. Sales from a collection, he said, can allow a museum to right inequities rooted in race, gender and class-based discrimination in its collection, as well as in all aspects of its operations.

Bedford, who led the recent effort to deaccession three paintings and raise $65 million for initiatives, including equitable pay raises for Baltimore Art Museum staff, direct care of the collection and more, encouraged those listening to challenge the association’s deaccessioning rules.

”The real threat to museums is not deaccessioning, but continuing to lose relevance because we are not responding to the moment and embracing our communities properly,” he said.

”We need to look with clear eyes at all the means and all the assets at our disposal and ask what are we willing to do and what are we willing to give to become the museums our communities deserve. This is not too much to ask, in my view. So, when the question is posed, ‘Why sell some art to achieve these goals,’ I would say, ‘Why not?’ “

Other symposium panels focused on legal issues, progressive deaccessioning and the ever-changing role of collections.

Anne Pasternak, director of the Brooklyn Museum, said guidelines from the association of what constitutes “direct care” would be welcomed by the museum community, especially at a time when the costs of caring for a collection and of running a museum have increased exponentially.

Others called for better collaborations with fellow institutions and for museums to focus more on audience engagement.

Michael O’Hare, a professor at the University of California-Berkley, posited that museums should shift focus to audience engagement, and sell the bottom 1 percent of their collection to fund initiatives.

“Art is not being engaged with if it is in storage,” he said. “What are you giving up by keeping work in the basement?”

SYRACUSE, N.Y. — Van Shields and Elizabeth “Buzz” McGraw said the Berkshire Museum’s deaccessioning decision was done at a time when the insti…

SYRACUSE, N.Y. — An art symposium on deaccessioning for museums, featuring several key principles in the Berkshire Museum art sale of 2018, is…

PITTSFIELD — Though Van Shields and Elizabeth McGraw no longer are with the Berkshire Museum, they will reunite this week to explain the museu…