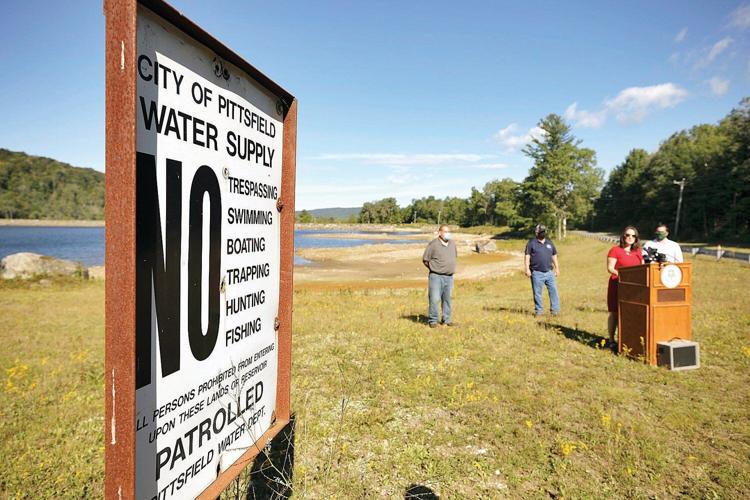 In 2020, as water levels fell in the Cleveland Reservoir, Pittsfield Mayor Linda Tyer rolled out a drought management plan that included mandatory water-use restrictions. Officials say the region is in a “mild” drought. 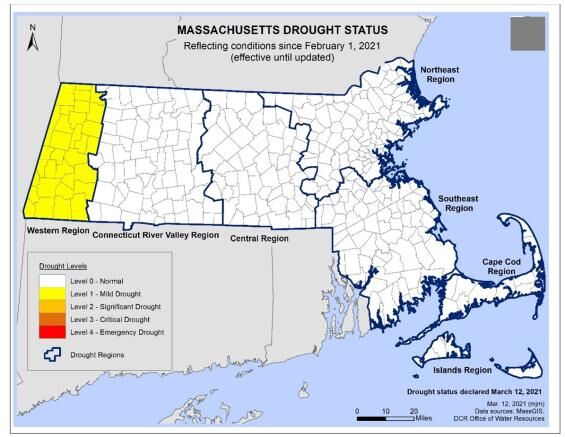 This map released Tuesday by state officials shows that Berkshire County is the only region of the state in a drought.

If 2021 is to again bring widespread drought to Massachusetts, Berkshire County is ahead of the curve.

The state declared Monday that Berkshire County is in a “mild drought” because of below-average precipitation in February.

Quite a bit below.

“In the Connecticut River Valley and the eastern slopes of the Berkshires, precipitation was 75 percent below normal,” according to the Drought Management Task Force of the Executive Office of Energy and Environmental Affairs.

As drought lingers in the Berkshires, water use warnings rise

Streambeds in the Berkshires look a little, well, rocky these days. And that's about the mood in municipal water departments as continued heat and lack of rain squeeze …

Other areas that received scant precipitation were the four western counties, and areas of north Central and Northeast Massachusetts.

The designation brings a call from state officials to conserve water and tend to leaks in plumbing. People who own or manage large buildings are being asked to conduct “water audits” to find ways to cut use. The requests are reminiscent of last year, when most of Massachusetts endured drought.

Kathleen Theoharides, the state energy and environmental affairs secretary, urged people to “minimize water use and be mindful of outdoor plantings and watering as the Commonwealth heads into the spring growing season.”

This map released Tuesday by state officials shows that Berkshire County is the only region of the state in a drought.

“We are watching drought conditions carefully,” Martin Suuberg, commissioner of the state Department of Environmental Protection, said in a statement Tuesday. “We will provide additional guidance moving forward as we assess conditions.”

The declaration of a “Level 1-Mild Drought” for Berkshire County will remain in place until conditions change, according to the task force. Its members met March 10 to review data.

The task force reports that the Housatonic River watershed is experiencing relatively drier conditions than the surrounding area. And it notes that when the snowpack in high elevations melts, as temperatures warm, that will help ease drought conditions. The task force next meets at 9:30 a.m. April 6.