PITTSFIELD — With the air-quality permit for a Merrill Road power plant set to expire in October, several local groups want the plant’s owner to consider switching to cleaner alternatives.

Maryland-based private equity firm Hull Street Energy owns the plant at 235 Merrill Road and has filed for a renewal of its permit. But, a coalition of the Berkshire Environmental Action Team and 20 other local groups is concerned about pollution from the gas-fired plant, which sits next to Allendale Elementary School and is within a mile of Pittsfield’s Morningside neighborhood.

But, the approximately 19,000 tons of carbon dioxide and 3 tons of nitrous oxide emitted in 2020 have local climate groups and others worried about negative health effects. They want Hull Street Energy, which declined to comment to The Eagle, to consider clean-energy alternatives such as batteries, which store energy to be released when demand is high. 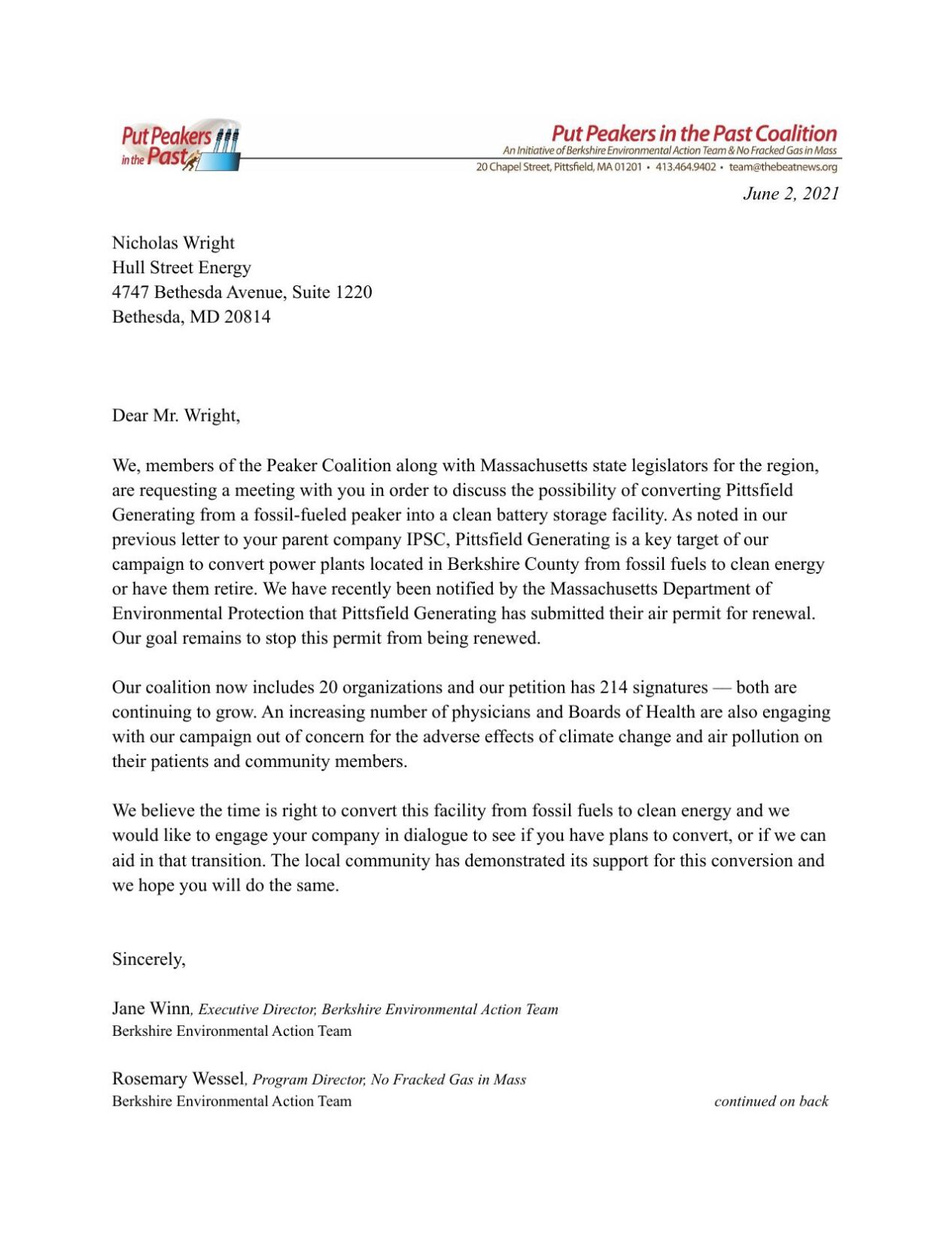 “They’re moving ahead with that permit, and we would like them to reconsider,” Rosemary Wessel, director of BEAT’s No Fracked Gas in Mass initiative, said of Hull Street Energy. “We would like them to meet with us and talk about transitioning to clean energy. Folks will be concerned that this plant will be continuing to operate and polluting the air that residents breathe.”

Meanwhile, coalition leaders and elected officials have had “wonderfully cooperative” communications, Wessel said, with Cogentrix Energy, the owner of two other local peakers. Wessel said she sees the conversations with Cogentrix, which owns a peaker on Doreen Street in Pittsfield and one on Woodland Road in Lee, as a model for the coalition to pursue with Hull Street Energy.

The coalition has used multiple methods to explore the consequences of pollution from peakers, as well as the feasibility of clean-energy alternatives.

Dr. Henry Rose, a retired internal medicine physician from Dalton, has contacted several boards of health regarding the health effects of pollution, he said. Carbon dioxide emissions contribute to climate change, and air pollution from particulate matter, nitrous oxide and sulfur dioxide has been linked with heart and lung problems, Rose said.

“They exacerbate underlying diseases, and the World Health Organization is aware that around 4 million excessive deaths worldwide occur due to air pollution,” Rose said, referencing 2018 findings from the WHO.

During the coronavirus pandemic, research also has suggested that communities with greater air pollution have seen higher death rates from COVID-19.

The coalition also has communicated with clean-energy consultants to learn about the feasibility of switching to clean energy, as well as incentives that might be available for companies seeking to transition.

Since peaker plants run for such short periods, they tend to be the “low-hanging fruit” for moving energy production away from fossil fuels, said Clean Energy Group Vice President and Project Director Seth Mullendore.

The cost of batteries has fallen almost 90 percent in the past decade, and regulatory changes have increased market access for battery storage, Mullendore said, although he added that some power grid operators have not implemented changes fully.

Across the state and the nation in recent years, there has been increased scrutiny of peakers.

The company proposing the Peabody plant has argued that the project is more reliable than battery storage or renewable energy. Ronald DeCurzio, CEO of the Massachusetts Municipal Wholesale Electric Company, claims that charging batteries with renewable energy “would be an extremely expensive endeavor, and would require huge swaths of land that are not readily available for such infrastructure.”

The Pittsfield Board of Health will include a discussion of pollution from peakers at its July 7 hearing, which begins at 6 p.m. Also, the state Department of Environmental Protection will hold a public hearing on Zoom after it has drafted a new permit for Pittsfield Generating. The agency is reviewing the application, a spokesperson said.

The coalition seeking a clean energy transition has its own actions planned. Members are holding a rally from 4:30 to 6 p.m. Friday in Pittsfield, at Dalton and Thorndyke avenues.

The coalition’s petition, which calls for replacing the three local peakers with a combination of solar energy and battery storage, has received more than 220 signatures, Wessel said.

When activists joined with local politicians and residents Tuesday night, they asked the state department two things: deny the permit to the facility or issue a provisional permit that would require the facility switch from natural gas and oil to solar power and battery storage.