PITTSFIELD — Nearly two years after she proposed it, Pittsfield Mayor Linda Tyer won support Tuesday for a plan to help residents fix up the outsides of their homes through use of potentially forgivable loans.

When Tyer’s “At Home in Pittsfield” program was defeated in April 2019 by a different City Council, opponents said Pittsfield should not be pulling money from an economic development fund that’s a legacy of the General Electric Co.’s departure from the city.

Two of those councilors, Kevin Morandi of Ward 2 and Christopher Connell of Ward 4, remained against the plan. But with two other opponents no longer on the body, the measure passed 8-2. It needed and secured a supermajority to pass. Council President Peter Marchetti recused himself due to a conflict.

After seeing her idea sidelined in 2019, Tyer vowed to try again, arguing that helping residents invest in their homes not only builds equity and family wealth for borrowers who qualify, it is good for the whole city, particularly in distressed neighborhoods.

And more than a year later, that campaign came through.

Tyer told councilors Tuesday that she would not come back to the panel seeking additional funding beyond the $500,000 approved Tuesday for the program, which will allocate loans to qualifying applicants over the next two or three years. 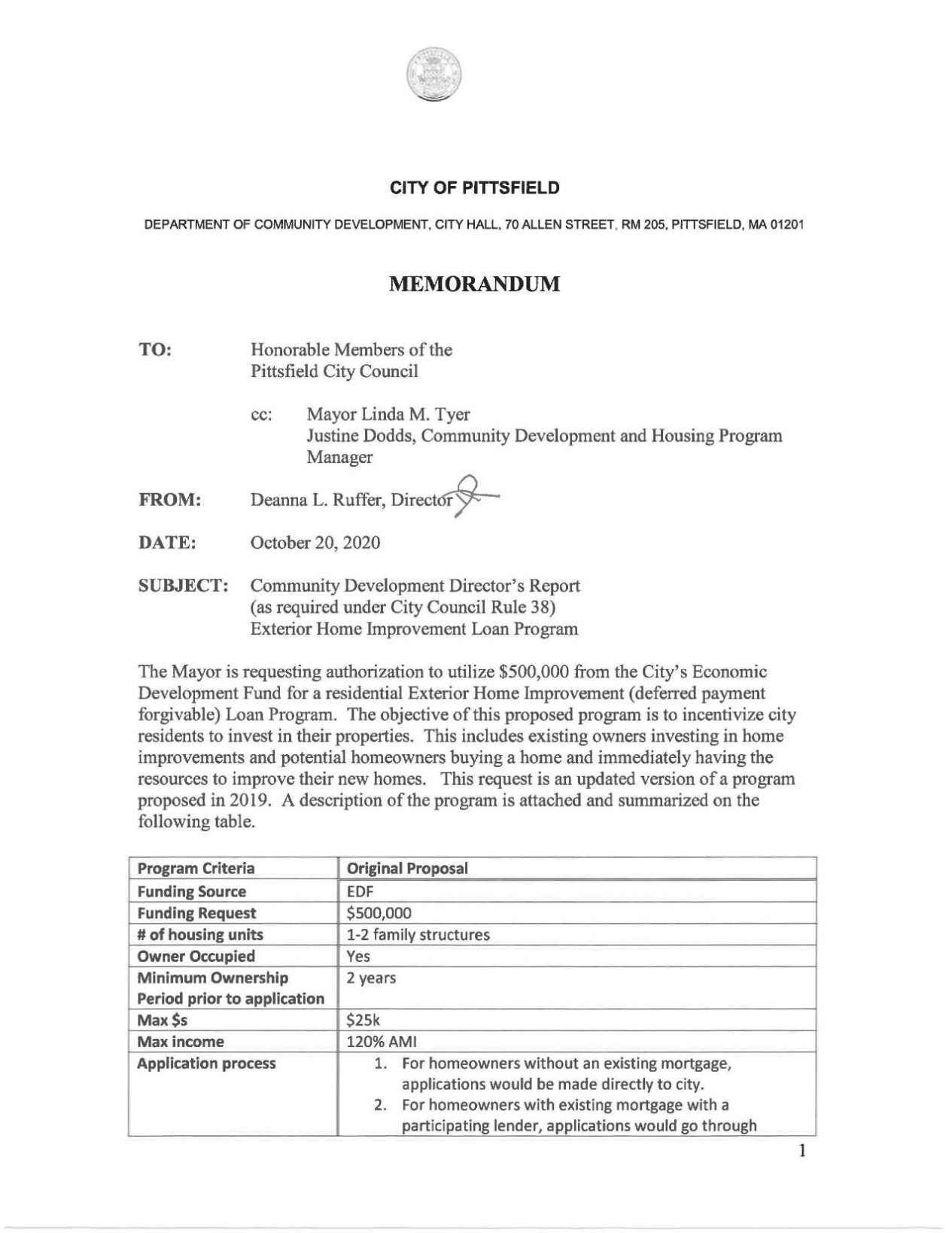 The program is designed to help homeowners who might not otherwise qualify for financing for repairs. Four local banks are partners. Applicants without mortgages can apply through the city.

Loans can be used for exterior improvements that prevent deterioration, such as repairs to porches, roofs, windows or chimneys.

The funding OK’d Tuesday is twice the amount that councilors rejected last year.

Tyer said she believed that the benefits of having people invest in their homes will be meaningful and clear and will be persuasive to other sources of funding.

The city, Tyer said, will be able “to show to other funding sources … that this is an investment that they should be participating in, when it comes to supporting community life.”

The project was on track to win approval at the last City Council meeting Nov. 10, but was delayed when Connell was able to halt debate through what’s known as a charter objection. On Nov. 4, the program won backing from the City Council’s Community and Economic Development committee.

On Tuesday night, Connell and Morandi continued to question whether it made sense to tap money in the GE fund, with Connell arguing that it should be reserved to help attract businesses to the new Berkshire Innovation Center and, more generally, to the former GE site.

“I still don’t think this is economic development,” Connell said of the At Home program. “We need to save this for those businesses that want to come into the innovation center,” Connell said. “They have the promise of building employment within the city of Pittsfield.”

Morandi said he admires the goals of the program. “I see the need. I represent that Morningside area,” he said. “But there are other ways to fund this. … It’s the funding source I’m against.”

But, a supermajority of councilors applauded the home-improvement effort, including some of those who voted to implement the program in April 2019, when the measure failed.

Ward 7 Councilor Anthony Maffuccio said he’s spoken with people in the trades who believe the effort will spur economic development, to a degree. “We have to think outside the box sometimes,” Maffuccio said. “In the long run, it’s a win-win situation.”

Nicholas Caccamo, of Ward 3, said the program will add jobs.

Among those voting yes Tuesday were four who backed the program in 2019: At-Large Councilors Earl G. Persip III and Peter White, Helen Moon of Ward 1 and Caccamo.

At an earlier council meeting, Lampiasi said she was sorry to see the program come up short in 2019 and was pleased to back it now.

Kavey said he had no doubt that the loans spur economic development, defining that as “the creation of wealth from which community benefits are realized.”

How 'At Home in Pittsfield' program works

The newly approved “At Home in Pittsfield” program will use $500,000 from the GE Economic Development Fund. Sixty percent of the money will be loaned to homeowners in the West Side and Morningside neighborhoods. The remaining 40 percent will be available for investments in homes in all other areas of the city.

The no-interest loans will be forgiven as long as the homeowner doesn’t move away within seven years, according to Mayor Linda Tyer. Those making up to 120 percent of median area income ($106,560 for a household) would be eligible to apply for loans up to $25,000. People have to have owned and occupied their homes for two years.

In a previous meeting, Ward 1 Councilor Helen Moon said the amount of money that would be available in the West Side and Morningside neighborhoods will underwrite about 18 loans.

Tyer has said that 43 percent of the city’s housing stock was built before 1939. She said there are aging homes in need of repair throughout the city.

For more information on the loans, contact the city’s Department of Community Development at 413-499-9368.