A board representing the state’s largest organization of criminal defense lawyers has written a scathing letter to Berkshire District Attorney Andrea Harrington, calling her attempt to have a district court judge removed from the bench “an indefensible and unethical effort to circumvent fair process.”

In the letter, the board of directors of the Massachusetts Association of Criminal Defense Lawyers said it was “deeply concerned” about Harrington’s effort to “undermine the independent decision-making of a sitting judge by engaging in an ex parte communication with the Court about pending cases brought by your office.”

Ex parte communication is when one party communicates to a judge directly about an open criminal case without including the other party. The letter contained information about several criminal cases, including an open murder prosecution.

A local defense attorney whose client was referenced in the letter has said he was upset the district attorney did not alert him about the communication.

In a statement issued late Friday, Harrington said she is “listening” to the criticism, but denied that the letter amounted to “improper ex parte communication.”

In May, Harrington wrote a letter to the chief justice of the district court system, Paul C. Dawley, claiming that Judge Jennifer Tyne posed a “significant threat to public safety,” and asked that she be barred from presiding over criminal cases in the county. Her complaints against the judge ranged from “dangerous rulings” to “hostile treatment of victims and prosecutors” in the Berkshire District Attorney’s Office.

Dawley reviewed audio from cases Harrington cited in her letter and concluded that there was “no factual basis” to support her claims of judicial indiscretion. 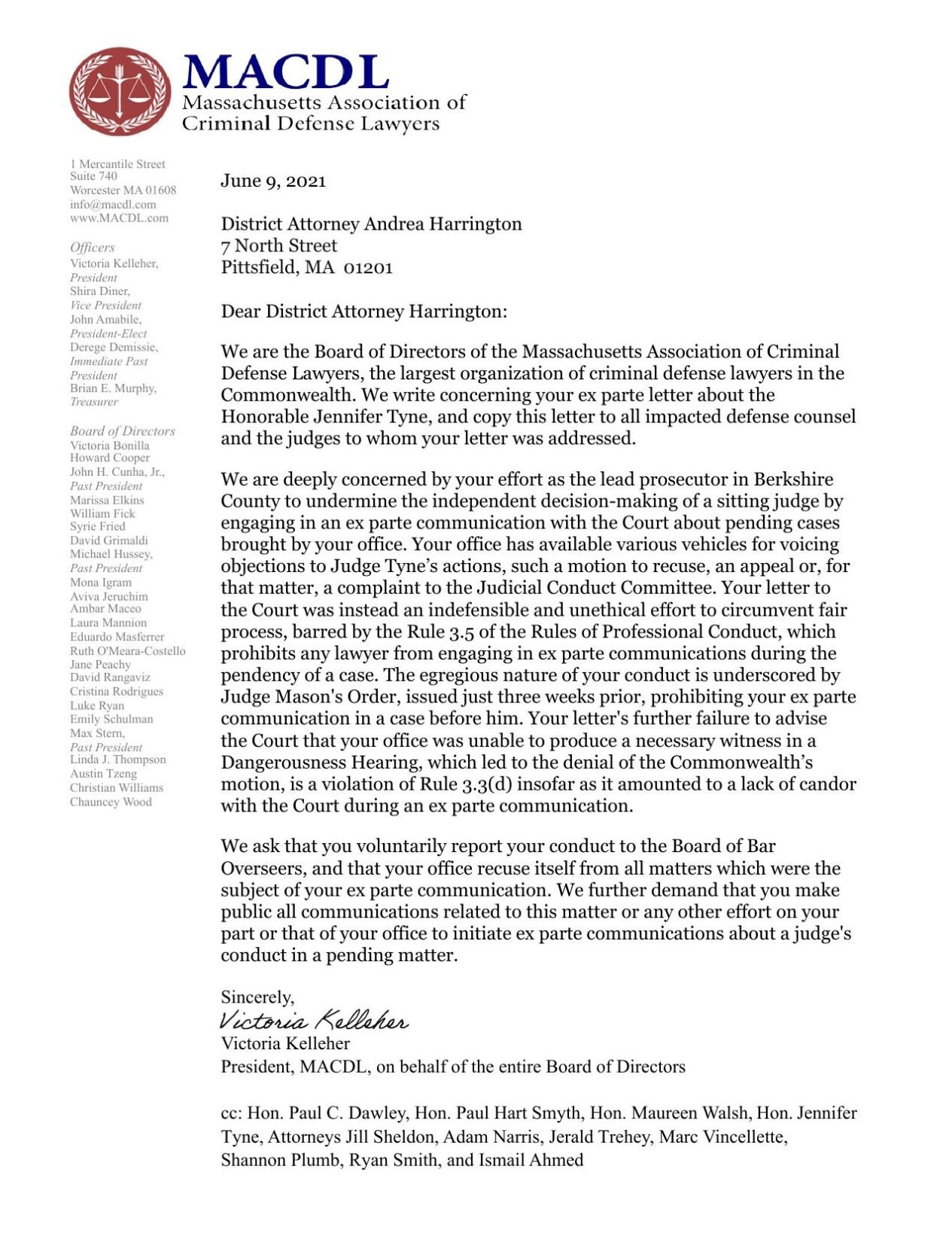 This week, the deputy chief counsel for the Public Defender Division of the Committee for Public Counsel Services, which provides legal representation to those who cannot otherwise afford it, said Harrington’s missive was “concerning and dangerous” and “sends a message to other judges that they need to fall in line or else face an attack on their livelihood.”

In her response Friday, Harrington said she “understand[s] the concerns raised by the MACDL and CPCS about the separation of power. As a former MACDL member and former state public defender … I am sympathetic to their frustrations.”

“I understand that being in a public position requires that I accept criticism, and I am listening,” she said in the statement. “I have a responsibility to do what I can to stand up for victims of crime and ensure public safety. I spoke out in this instance out of deep concern for victims of domestic abuse and gender-based violence, whom our larger justice system has often disempowered and disregarded.”

Harrington said this week that she stood by the content of her letter, adding that she is content knowing top district court officials are aware of her concerns. 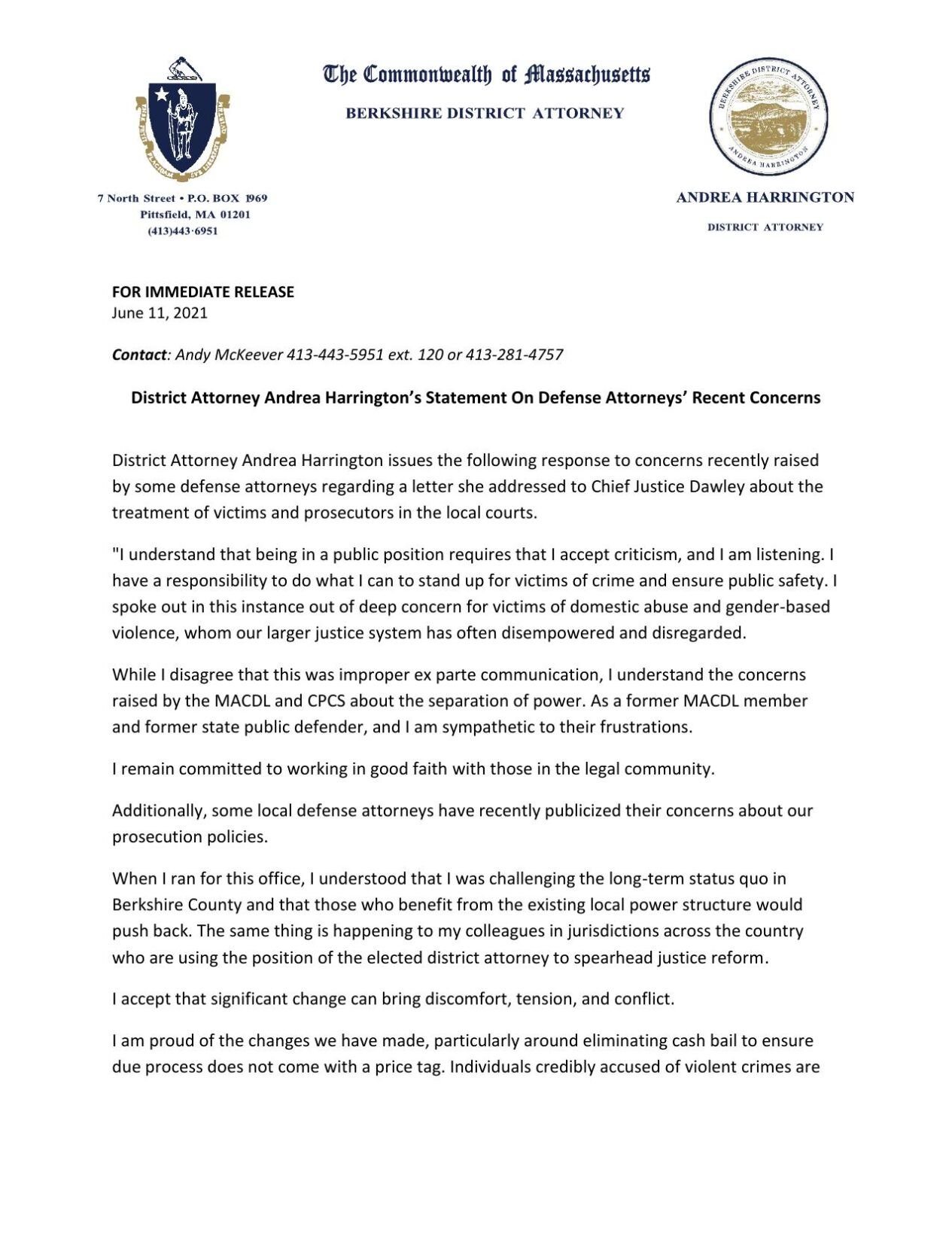 The letter from the lawyers association, which was dated Wednesday and signed by Victoria Kelleher, the president of the organization, said that Harrington had many other options for voicing objections to Tyne’s actions, including a motion to recuse, an appeal, or a complaint to the Judicial Conduct Committee.

“Your letter to the Court was instead an indefensible and unethical effort to circumvent fair process, barred by the Rule 3.5 of the Rules of Professional Conduct, which prohibits any lawyer from engaging in ex parte communications during the pendency of a case.”

The lawyers association concluded the letter by making several requests: “We ask that you voluntarily report your conduct to the Board of Bar Overseers, and that your office recuse itself from all matters which were the subject of your ex parte communication.”

“We further demand that you make public all communications related to this matter or any other effort on your part or that of your office to initiate ex parte communications about a judge’s conduct in a pending matter.”

In her statement, Harrington did not address the recusal request from the lawyers association, the request that she report herself to the oversight board, or the demand to make public all ex parte communications about a judge’s conduct.

“I remain committed to working in good faith with those in the legal community,” she said.