This anatomically correct model made by The Chamberlain Group in Great Barrington is being used to train testers conducting nasopharyngeal swab tests for COVID-19. The location of the nasopharyngeal area, which is at the bottom of the nose and top of the throat, is not where many people — even professionals — think it is. 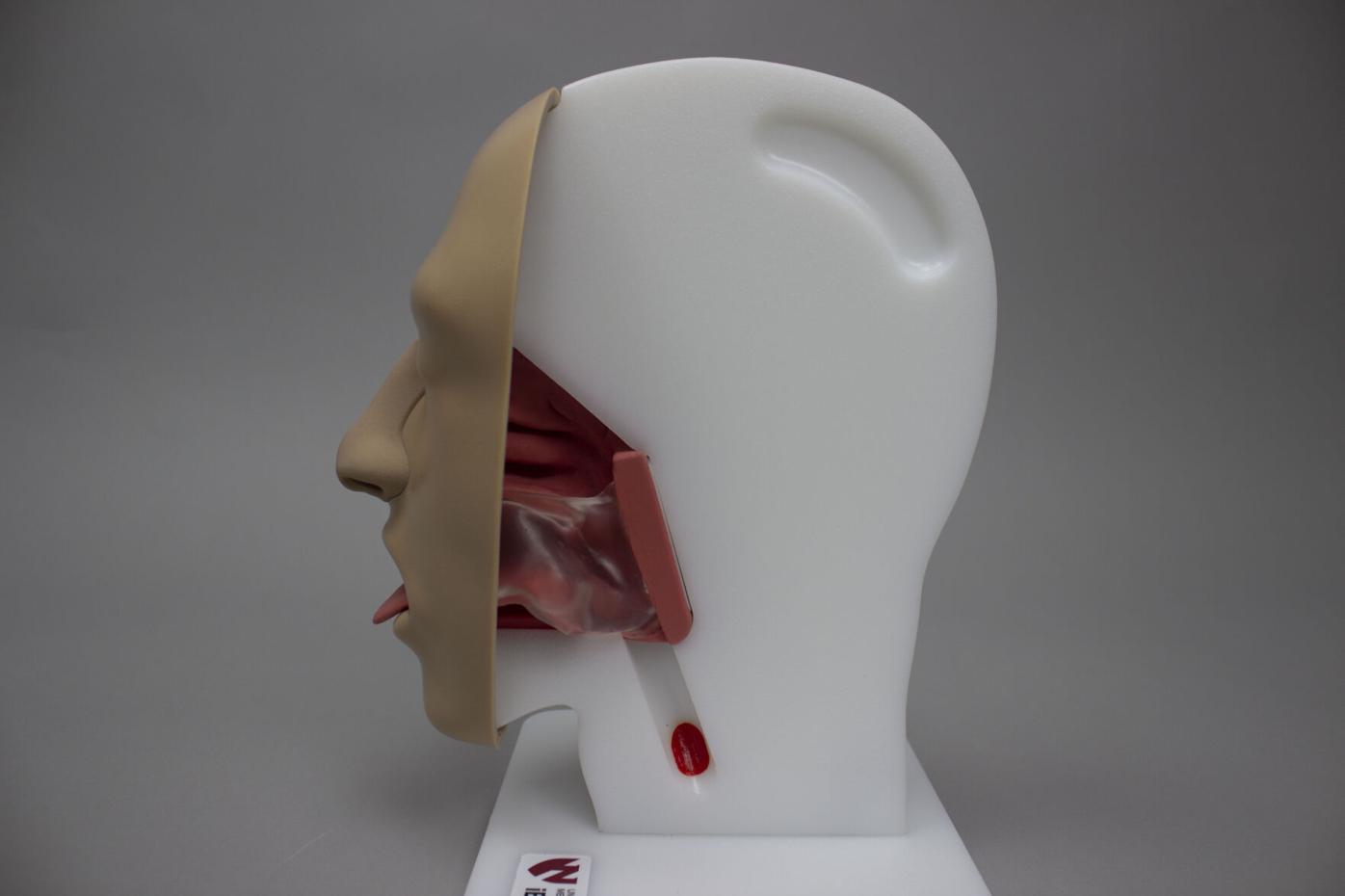 This anatomically correct model made by The Chamberlain Group in Great Barrington is being used to train testers conducting nasopharyngeal swab tests for COVID-19.

GREAT BARRINGTON — With one type of COVID-19 testing, the direction of the swab as it passes through the nose is crucial for accurate results.

It needs to move "back, not up," as the authors of a September article in the Journal of the American Medical Association put it.

But, the location of the nasopharyngeal area, which is at the bottom of the nose and top of the throat, is not where many people — even professionals — think it is.

And going the wrong way could cause problems, says Lisa Chamberlain, managing partner of The Chamberlain Group in Great Barrington. She said pushing the swab vertically can not only produce false-negatives, but gets dangerously close to the brain.

The company has made something to help train testers find their target and avoid mistakes that lead to false negatives — or worse.

"You have to be careful," she said, noting that the side view of the model shows the direction of the swab, so that testers can see the anatomy. "You can damage a patient."

The South Main Street company, which routinely tests employees, creates anatomically accurate models for medical training, and now it has created one for nasopharyngeal virus testing, which also can be used to test for the flu. When a tester correctly reaches this area at the base of the nose and upper throat, a blue light appears, indicating that they got it right.

"What you're creating is the muscle memory of what it feels like to go along the floor of someone's nose," Chamberlain said.

It is the "pervasive" incorrect collection of these secretions that might explain, in part, significant rates of false negatives, according to the JAMA article.

"The trajectory from the nostril to the nasopharynx is often presumed to be along the dorsum of the nose, likely because of the visual appearance of the external nose," the article's authors say. "In reality, the correct trajectory is along the floor of the nose in the direction back toward the ear.

"We hope highlighting that the nasopharynx is back, not up, can help limit false-negative results in testing for SARS-CoV-2 and other respiratory viruses."

Accuracy in COVID-19 testing has become one of the keys to containing a virus that one can harbor without symptoms, according to the Centers for Disease Control and Prevention. And nasopharyngeal swab testing still is used widely and is considered the "criterion standard," according to JAMA.

At the University of Nebraska Medical Center's iEXCEL medical simulation lab, clinicians saw that they needed more-advanced models for the COVID-19 tests for correct training, and chose Chamberlain to make them.

Chamberlain and her husband, Chief Operating Officer Eric Chamberlain, founded the company in 1999, their talents morphing out of special effects careers in Hollywood, where they worked on movies including "Superman," "Predator," "The World According to Garp" and "The Matrix."

Amid the pandemic, the Chamberlains and staff got busy developing the product, made with polymers that, in this case, are rigid enough to mimic cartilage, and had the first units ready to ship to Nebraska in November.

Lisa Chamberlain said the company hopes to widen the distribution.

"Think about what happens with a false negative," she said. "They're out in the community thinking that they're fine."