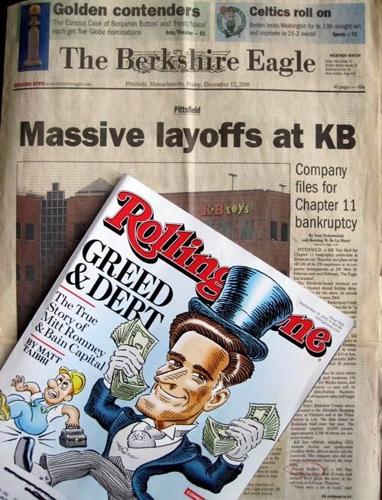 The Eagle’s coverage on Dec. 12, the day after the filing, along with the recent Rolling Stone cover depicting Mitt Romney as a greed-driven leader of Bain Capital, the Boston-based venture capital firm that once owned KB. 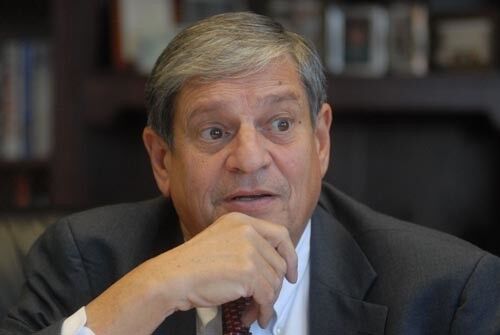 Former North Adams Mayor John Barrett III says he doesn’t think Romney ‘had anything to do with the decision to close KB,’ but Bain took struggling companies, ‘cut a lot of people ... and Romney profited from it.’ 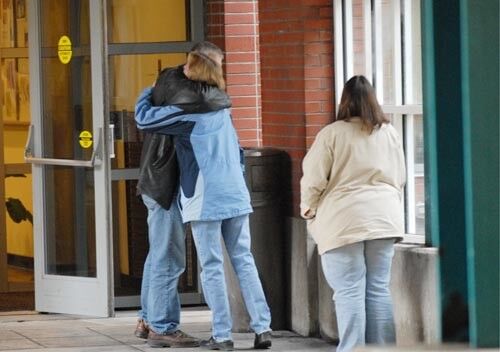 KB Toys employees hug outside of the Pittsfield company’s headquarters on West Street in December 2008. KB filed for bankruptcy that month and closed down in 2009.

Long lines such as this one on Black Friday, 2004, outside of the KB Toy Works at Allendale in Pittsfield, harkened to better times in the company’s history. KB at one point was the nation’s No. 3 toy seller.

The Eagle’s coverage on Dec. 12, the day after the filing, along with the recent Rolling Stone cover depicting Mitt Romney as a greed-driven leader of Bain Capital, the Boston-based venture capital firm that once owned KB.

Former North Adams Mayor John Barrett III says he doesn’t think Romney ‘had anything to do with the decision to close KB,’ but Bain took struggling companies, ‘cut a lot of people ... and Romney profited from it.’

KB Toys employees hug outside of the Pittsfield company’s headquarters on West Street in December 2008. KB filed for bankruptcy that month and closed down in 2009.

Long lines such as this one on Black Friday, 2004, outside of the KB Toy Works at Allendale in Pittsfield, harkened to better times in the company’s history. KB at one point was the nation’s No. 3 toy seller.

PITTSFIELD -- Nearly four years ago, KB Toys, a mainstay of the city's economy, ended its 86-year run after a second and final bankruptcy filing liquidated the company and wiped out 270 jobs at corporate headquarters on West Street.

The role of venture capital firm Bain Capital in causing or hastening the unraveling of the once-formidable national toy company remains en meshed in political controversy.

Bain, founded by former Massachusetts governor and current Republican presidential candidate Mitt Romney and his partners in 1984, took over already distressed KB in 2000, 19 years after the Pittsfield company went from control by the Kaufman family to a succession of corporate owners, including Melville Corp. and Consolidated Stores Corp.

After four years under Bain, KB declared bankruptcy for the first time, laying off about 90 workers at its West Housatonic warehouse and downsizing from its peak of 8,500 full-time employees to 5,000 nationwide, and sharply cutting back the 6,000 temps typically hired for pre-Christmas sales.

Bain's involvement in KB's slide toward oblivion was revisited in the Sept. 13 issue of the liberal-leaning magazine Rolling Stone. The widely circulated article by Matt Taibbi added fuel to the Obama re-election campaign's effort to depict Romney and his firm as job destroyers.

Barrett, the current director of the BerkshireWorks Career Center and previously a consultant to former Pittsfield Mayor James Ruberto, will be in Ohio for the final campaign wrap-up before the Nov. 6 election.

"Every place I've gone, they once had a KB store," Barrett said. "I've talked about how Bain Capital wiped out the company and how Romney, while he was governor, still received residual payments. He walked away with a chunk of the $85 million Bain took from KB. It's shocking."

"I don't think Romney had anything to do with the decision to close KB,'' Barrett acknowledged. ... [But] the story that resonates is the callous nature of the business he was in. It's about the bottom line, not people. Bain went into troubled companies, downsized them, cut a lot of people, impacted their lives, and where they couldn't save the company, they had a big payday, and Romney profited from it."

In the U.S. Senate race in Massachusetts, Democrat Eliza beth Warren and Republican incumbent Scott Brown have declined to comment to The Eagle about how much Romney is to blame for KB's demise.

One who is talking is Dylan Stafford, 21, of Wil liamstown. A junior majoring in political science at MCLA, he recalls the hard times that he and his mother went through after she was laid off from KB in 2008.

"It hit my family hard," Stafford said, adding that he blames Romney for the company's collapse even though Romney no longer was Bain's managing partner during the bankruptcy filings.

"It kind of makes me sick; he's the one who put hard-working Americans out of jobs," said Stafford, who is campaigning for Obama in New Hampshire this weekend. "I saw my mom struggle; we could hardly pay the heating bills and the rent."

"I hired Lenny," recalled Howard Kaufman, 86, whose father, Joseph, and uncle, Harry, developed what became known as Kay Bee in the 1940s out of a Columbus Avenue wholesale candy business they had opened in 1922.

Howard Kaufman, a Lenox resident, left the family business in 1986, five years after it had been acquired by Melville Corp.

Kaufman said he has learned that during the venture capital firm's ownership, "Bain paid the KB management a lot of money to stay in place, but the bulk of the company got nothing."

In 2000, Bain paid $302 million to acquire KB from Con solidated Stores, which had taken over from Melville in 1996. But Bain put up only $18 million of its own money. The rest was financed by major banks.

In 2002, Bain made KB borrow heavily and redeem $187 million in stock to stay afloat and pay dividends to Bain's owners and investors.

Although Romney no longer was directly involved in running Bain, as an owner and investor he and others pocketed $85 million -- a 370 percent return on Bain's original investment.

KB was staggering under what became a $300 million debt load as well as withdrawal of $120 million in its remaining cash assets to help pay huge bonuses to its executives at the time, including $18.4 million to CEO Michael Glazer. The company was on the ropes from underpricing competition by Wal-Mart, Toys "R" Us and Target.

KB, the nation's No. 3 toy seller until 2004, spiraled downward into two rounds of bankruptcy, first in 2004 and finally in December 2008, with a recession-plagued, dismal holiday shopping season delivering the final death blow.

In 2004, KB laid off more than 3,400 employees nationally -- including 90 at the Pittsfield warehouse -- and closed hundreds of stores. By February 2009, all remaining employees had been let go and the 600 remaining stores had been shuttered.

Bain had sought to retain control of KB as it emerged from its first bankruptcy filing in 2005, but a bankruptcy court judge awarded the remnants of the company to Prentice Capital Management.

Prentice installed Andrew Bailen as CEO for what turned out to be two more years of descent into final liquidation. Bailen, now managing director of Strategic Toy Solutions and of 3Pe Consulting in Denville, N.J., did not return calls from The Eagle seeking comment. He has never spoken publicly about the liquidation during his term as CEO; his current firm specializes in retail turnarounds and start-up support.

The New York Times investigation, acknowledging that Romney officially departed day-to-day control of Bain in 1999 to save the 2002 Salt Lake City Olympics and then enter politics, pointed out that his ownership as Bain's managing partner terminated in 2001, a year after the KB acquisition.

Romney's retirement agreement has paid him an undisclosed share of Bain's profits ever since.

Andrea Saul, Romney's chief press spokeswoman, did not return The Eagle's call seeking comment, but she told The Times that the payouts to the former governor represented "a typical market deal. Bain Capital has no incentive to overpay Governor Romney, and they didn't."

In 2007, Romney told The Times: "Sometimes the medicine is a little bitter, but it is necessary to save the life of the patient. My job was to try and make the enterprise successful, and in my view the best security a family can have is that the business they work for is strong."

In December 2011, he told Fox News Channel: "In each case, we tried to grow an enterprise and, in doing so, hopefully provide a better future for those associated with that enterprise."

Ruberto, a longtime business executive before returning to Pittsfield and entering public life, said the KB story reflects "the tragedy of American business from the late 1980s until this time."

"It's so very unfortunate when a company like KB, owned and operated by local people for decades, is acquired by a venture firm like Bain. All of a sudden a local company is being run from 30,000 feet above sea level with no clear understanding of what it took to make it successful and keep it successful.

"You had local management that started, lived and loved the company, and understood its responsibility to the community. Bain's presence in Pittsfield served no purpose other than bringing disappointment and unhappiness to 400 workers, and to me that's a tragedy. Bain has to share a large portion of that responsibility."

The KB Toys brand lives on, but only as a shadow of its former self.

In a liquidation sale completed on Sept. 4, 2009, Toys "R" Us acquired the KB logo, website, trademarks and intellectual properties.

Toys "R" Us uses the KB brand in some of its own manufactured toys under the name "KB Classics," complete with the old KB logo.

1940s: The brothers acquire a toy company as payment for an outstanding debt and begin to expand the company.

1948: The toy company thriving, the brothers decide to focus on it exclusively and get out of the candy business.

1973: The company moves from wholesaling to retailing toys, calling itself Kay-Bee Toy & Hobby. It has 26 stores.

1981: The company is purchased by Melville Corp., now with 210 locations. Its name changes to Kay-Bee Toy Stores.

2000: Company comes under control of Bain Capital LLC of Boston.

January 2004: The company files for Chapter 11 bankruptcy protection, closes more than 600 stores and lays off more than 3,400 employees.

February 2007: KB Toys closes its store at the Berkshire Mall.

August 2007: The company unveils a strategy to re-establish itself as a discount "value" store. KB's "shrink to grow" includes some layoffs at the Pittsfield headquarters.

October 2008: KB Toys announces that more than 200 toys in its retail inventory will be reduced to $10 or less as the holiday buying season approaches amid a sliding economy.

Dec. 11, 2008: KB Toys files for Chapter 11 bankruptcy protection and announces plans to liquidate its assets; 270 employees in Pittsfield get layoff notices, with no severance.

February 2009: The liquidation of KB Toys is completed.