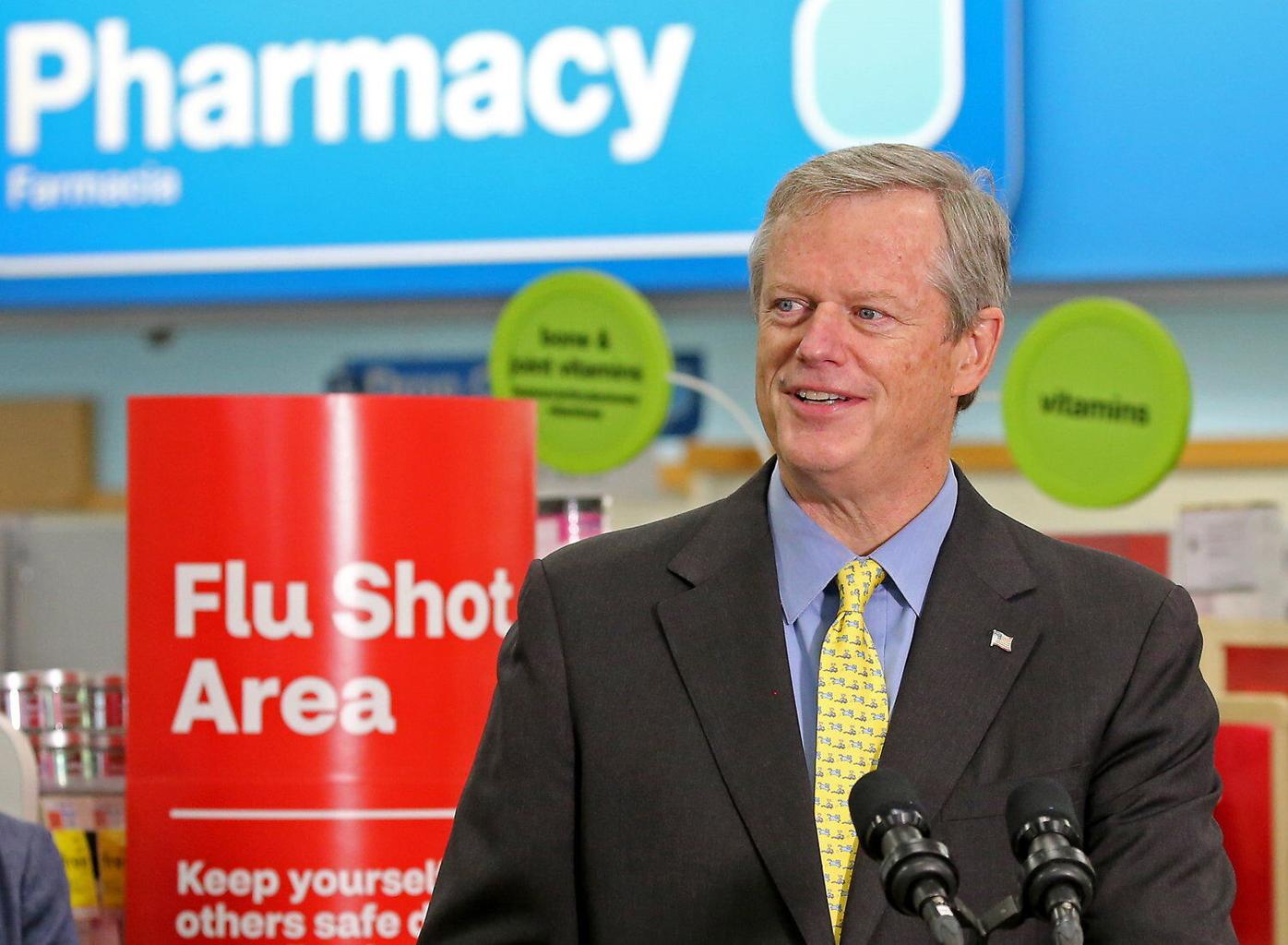 Gov. Charlie Baker addresses the media Thursday after receiving a flu shot at a CVS in Roslindale. He said health care workers have "urged us to step up our game — which is already pretty good relative to most of the states around the country — on flu vaccines." 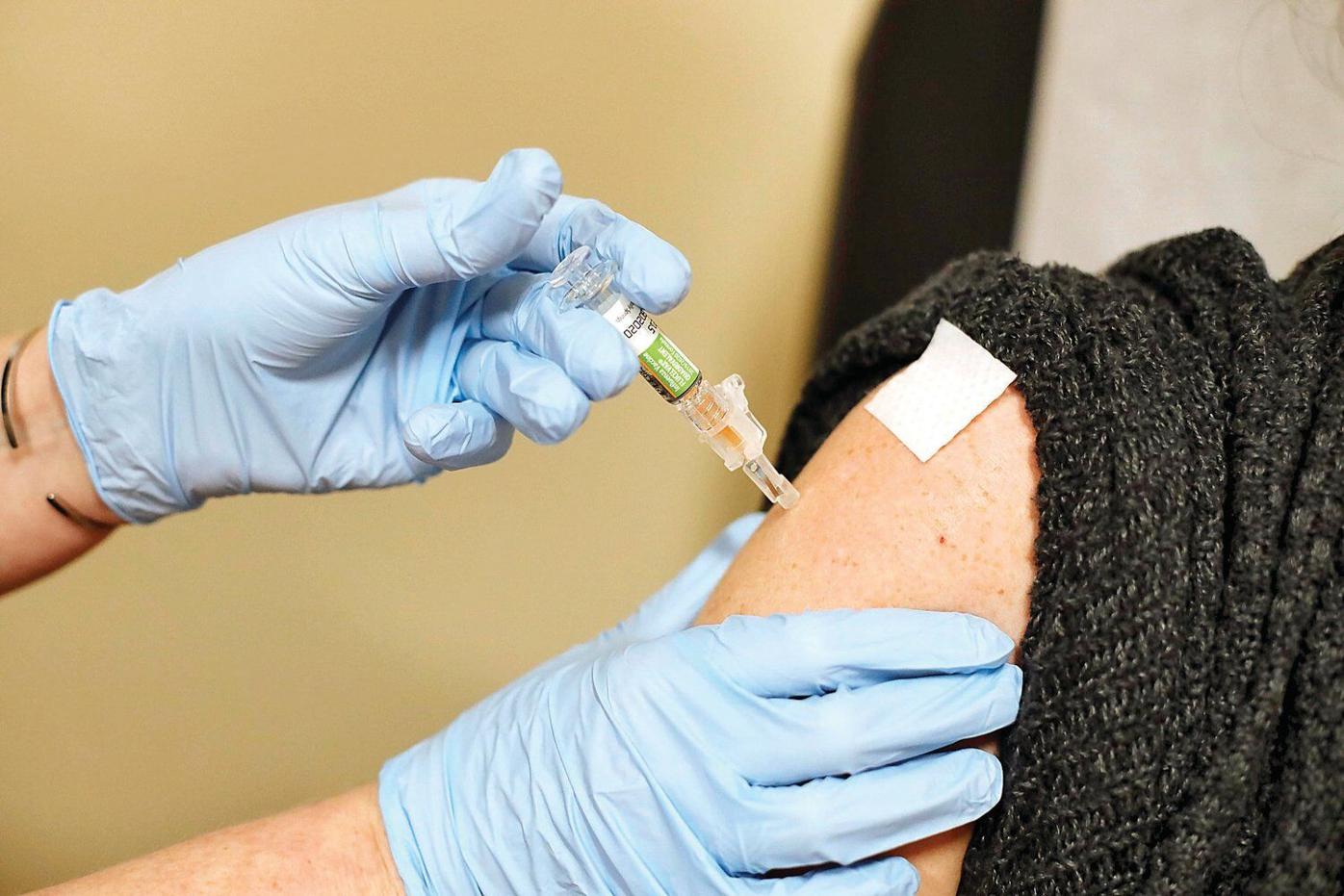 Gov. Charlie Baker said Thursday that anyone reluctant to get a flu shot should do so out of respect for health care workers, who were lauded as heroes in the spring, and to prevent a double-whammy of flu and COVID-19 cases.

Gov. Charlie Baker addresses the media Thursday after receiving a flu shot at a CVS in Roslindale. He said health care workers have "urged us to step up our game — which is already pretty good relative to most of the states around the country — on flu vaccines."

Gov. Charlie Baker said Thursday that anyone reluctant to get a flu shot should do so out of respect for health care workers, who were lauded as heroes in the spring, and to prevent a double-whammy of flu and COVID-19 cases.

Think of the doctors and nurses dealing with COVID-19 on a daily basis.

That was Gov. Charlie Baker's message Thursday, after he got a flu shot at a Roslindale CVS and pressed Massachusetts residents to get vaccinated against the flu this fall, which, he said, will be crucial to prevent overburdening the state's health care system with the flu and COVID-19, which share many symptoms.

Baker has mandated that students in Massachusetts, from preschool to college, and kids who participate in child care programs, must get their flu vaccine by the end of 2020 but said Thursday that it's important that others elect to get a flu shot, too. The governor said health care workers began talking with his team about a month ago about what it would mean to have flu activity peak at the same time as a second surge of COVID-19 cases. April's surge in COVID-19 cases came after the bulk of activity associated with the last flu season.

"The point they made to us at that time was from a diagnostic point of view, from a care-delivery point of view, from a capacity point of view, having the flu and COVID-19 surge in the commonwealth at exactly the same time would be an incredibly difficult situation for them to manage their way through and they urged us to step up our game — which is already pretty good relative to most of the states around the country — on flu vaccines," Baker said.

As of the week ending Sept. 5, Massachusetts was showing "minimal" influenzalike illness activity, according to the Centers for Disease Control and Prevention. Officials have said it is best to get a flu shot by the end of October, since flu activity generally picks up in the late fall. In three-fourths of the 36 flu seasons from 1982-83 through 2017-18, peak flu activity has not occurred until January or later, the CDC said.

"While it's not possible to say with certainty what will happen in the fall and winter, CDC believes it's likely that flu viruses and the virus that causes COVID-19 will both be spreading. In this context, getting a flu vaccine will be more important than ever," the CDC wrote on its website. "CDC recommends that all people 6 months and older get a yearly flu vaccine."

Manufacturers around the country project that they will provide as many as 198 million doses of flu vaccine this season, the CDC said, which would top the 175 million-dose record set during the 2019-20 flu season. The agency said that, so far, there have been no significant delays in distributing flu vaccine doses.

Health and Human Services Secretary Marylou Sudders said Massachusetts is slated to receive 1.156 million doses of flu vaccine this year, a 28 percent increase over the 900,000 that the state orders for a typical flu season.

For the 2018-19 influenza season, the most recent data available, Massachusetts had the highest rate of vaccination among children 6 months to 17 years old.

In the 2019-20 flu season, there were 40,000 positive cases of the flu reported to the state Department of Public Health. About 6,600 people died, according to Sudders.

This year's flu shot covers the four main strains seen last year and appears to be effective, according to health officials. But, even if it does not provide 100 percent coverage, it still will blunt the flu season's impact.

While the administration initially announced the mandatory flu vaccination as "an important step to reduce flu-related illness and the overall impact of respiratory illness during the COVID-19 pandemic," Baker and Sudders later clarified that the mandate will remain in effect even after the COVID-19 pandemic is in the rearview mirror.

Baker's order sparked protests from parents opposed to a government mandate that their children be vaccinated for something they previously had not been required to be vaccinated against.

The governor said he understands that there are people who are angry about his executive order and he appealed to those people Thursday by telling them to think of the health care workers lauded as heroes in the spring and what a bad flu season would mean for them.

"I would just say to all of those folks in Massachusetts who admire, respect and appreciate the heroic work that was done by so many people in our health care community last spring, that for them and for yourselves, you should go out and get a flu vaccine this year so that you and they can feel confident that, as they deal with respiratory issues this fall and the potential of a second surge, more and more people in Massachusetts will have protected themselves from having the flu pile on top of a potential second surge associated with COVID," the governor said.

The Massachusetts Health and Hospital Association supports the governor's mandate and said health care workers already are concerned about the impending flu season while also preparing for a potential second surge of COVID-19 cases.

"We appreciate the Baker Administration's proactive focus on areas like classrooms, where a flu outbreak could further harm the health of our communities and overwhelm our hospitals," Steve Walsh, the head of the association, said in a statement. "Just like wearing a mask and social distancing, getting a flu shot is a simple but powerful way to help our health care community through what will be a very challenging fall."

The potential for a second surge of COVID-19 cases to coincide with the rise of flu cases this fall has been discussed since the spring. In July, the Food and Drug Administration granted emergency-use authorization for a CDC-developed nasal or oral swab test that is designed to simultaneously detect three types of viruses: two that cause the flu and the coronavirus that causes COVID-19. The CDC said initial test kits were sent to state public health laboratories in early August. The agency said the test is meant to "supplement and streamline surveillance for flu and COVID-19."

As the coronavirus just was emerging in mid-February as a serious public health threat, the state DPH was dealing with a "very high" severity flu season that was sending more people to hospitals than in recent years. Officials said the risk of becoming infected with the coronavirus was low — that appears to have been the case, with reports that the one confirmed case in Massachusetts until March did not spread the virus — and that the traditional seasonal flu was of greater concern.

Public Health Commissioner Monica Bharel in mid-February reminded the Public Health Council at a meeting that while there was one confirmed coronavirus case in Massachusetts, there were "tens of thousands" of cases of influenza in the state, the News Service reported in February.