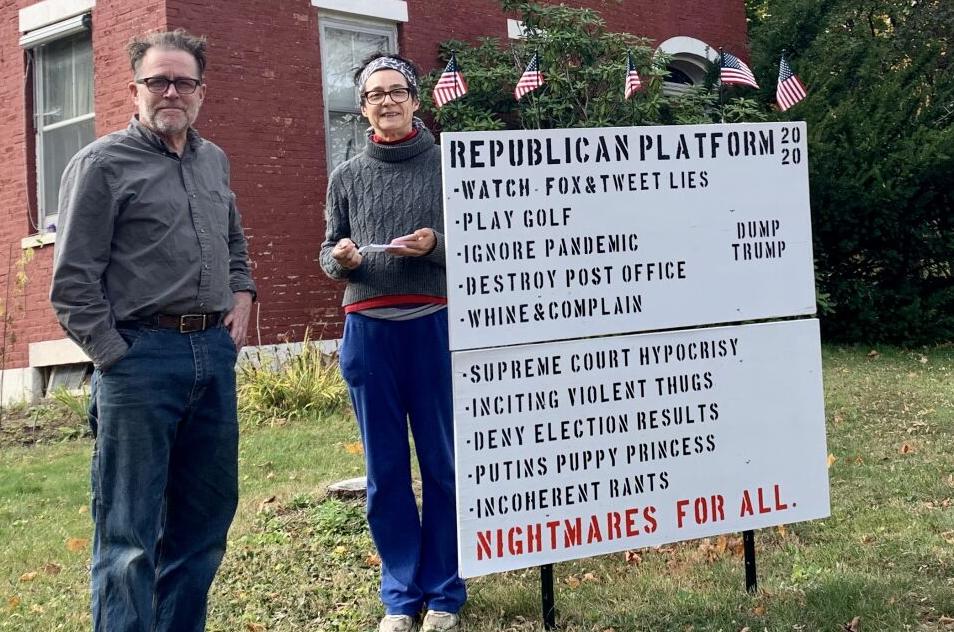 James Siena and Katia Santibanez stand with the sign that was vandalized in front of their home last month. They are among a handful of Otis residents who have reported political signs damaged or missing in the past month. 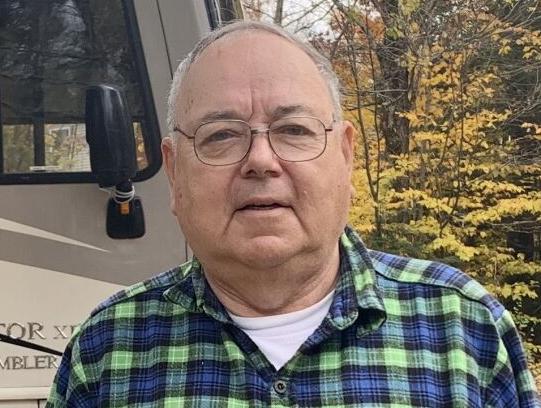 George Mengel, a supporter of President Donald Trump, said he has noticed missing political signs in his hometown of Otis.

James Siena and Katia Santibanez stand with the sign that was vandalized in front of their home last month. They are among a handful of Otis residents who have reported political signs damaged or missing in the past month.

George Mengel, a supporter of President Donald Trump, said he has noticed missing political signs in his hometown of Otis.

OTIS — In this southeastern corner of the Berkshires, a place known for its hunting and fishing, leaves have started to disappear from the trees. And so have some political yard signs.

Someone last month broke the wooden stakes of a large handmade sign outside a home at the busy intersection of Routes 8 and 23. The homeowners reported it to state police and replaced the supports with steel.

“We’ve got to get good at talking to each other even when we disagree.”

Some residents say they are puzzled and feel vulnerable, given that they know a number of their neighbors support President Donald Trump. They also are left uneasy by political tension ahead of the presidential election.

Local support, they say, is evidenced, in part, by a large Trump banner outside one home on Route 23, and a Trump flag and signs in East Otis.

“Some friends told us, ‘You’re really brave — be careful,’ ” said Katia Santibanez, after she and her husband, James Siena, found their handmade sign excoriating the Republican platform knocked down, its supports splintered.

Yet, others around town say they try to fly low, and not talk politics with neighbors — or even with relatives.

“I stay neutral, even with my family,” said Otis Police Officer Charles Whiting, who was patrolling Route 8 on Tuesday. “Life’s too short.”

Along Route 23, some Trump/Pence signs are mixed with those backing Biden/Harris. All are few and far between, including a handful of Black Lives Matter signs. It also is a stretch that features a cluster of signs supporting Dr. Shiva Ayyadurai for U.S. Senate. Ayyadurai is an independent, write-in candidate.

Ebitz, who is on the town library board and whose husband is an EMT, said she and some of the others whose signs have been taken are part of the group Diverse Otis, and were able to discuss it at a recent meeting.

Ebitz has lived in Otis for 34 years. She is open to listening.

“I try to visualize who might have done it, and I would love to talk to them and see where they’re coming from and acknowledge that,” Ebitz said. “We’ve got to get good at talking to each other, even when we disagree.”

George Mengel, who has two American flags on his property and supports Trump, lives across Route 23 from the “Trump banner.”

Mengel, a retired Teamster who, in a nonpandemic year, typically spends half of his time traveling in his motor home, said times have changed.

“I noticed that there were candidates’ signs out and now they’re not there anymore,” he said. “You like a candidate, you put a sign out, and you expect it to be there until after the election.”

The couple whose handmade sign critical of the GOP agenda was vandalized at their home next door to Town Hall said they were not surprised.

“We put it up right after the Republican convention,” Siena said. “We topped it with those 59-cent American flags you get at the hardware store. I thought the flags might protect it.”

That was Sept. 5. It stood until Sept. 28, when the stakes were broken in broad daylight while the couple were at an appointment.

A state police spokesman said Tuesday that without surveillance capturing the vandalism, suspects have not been identified.

Across the street from Katie’s Country Store and Takeout in East Otis, a Trump flag ripples and a sign is planted out front. Next door stands a Biden sign.

“We hear plenty of stuff in here but we don’t engage,” said Lisa Lajoie.

“Everyone has their opinion and everyone should keep it to themselves,” she said. “But, they don’t.”

When asked about the missing signs, and if she sees trouble brewing in Otis, Town Administrator Brandi Page said this was the first she had heard of it, and that early voting has been “running smoothly.”