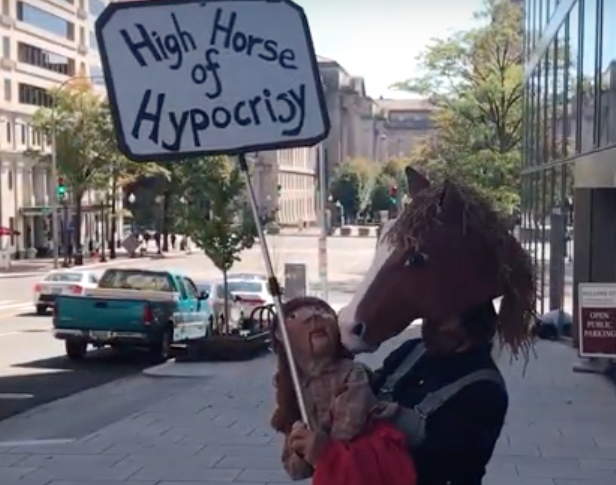 Local puppeteer Meredyth A. Babcock takes to Washington, D.C., to protest the nomination of Amy Coney Barrett to the Supreme Court. 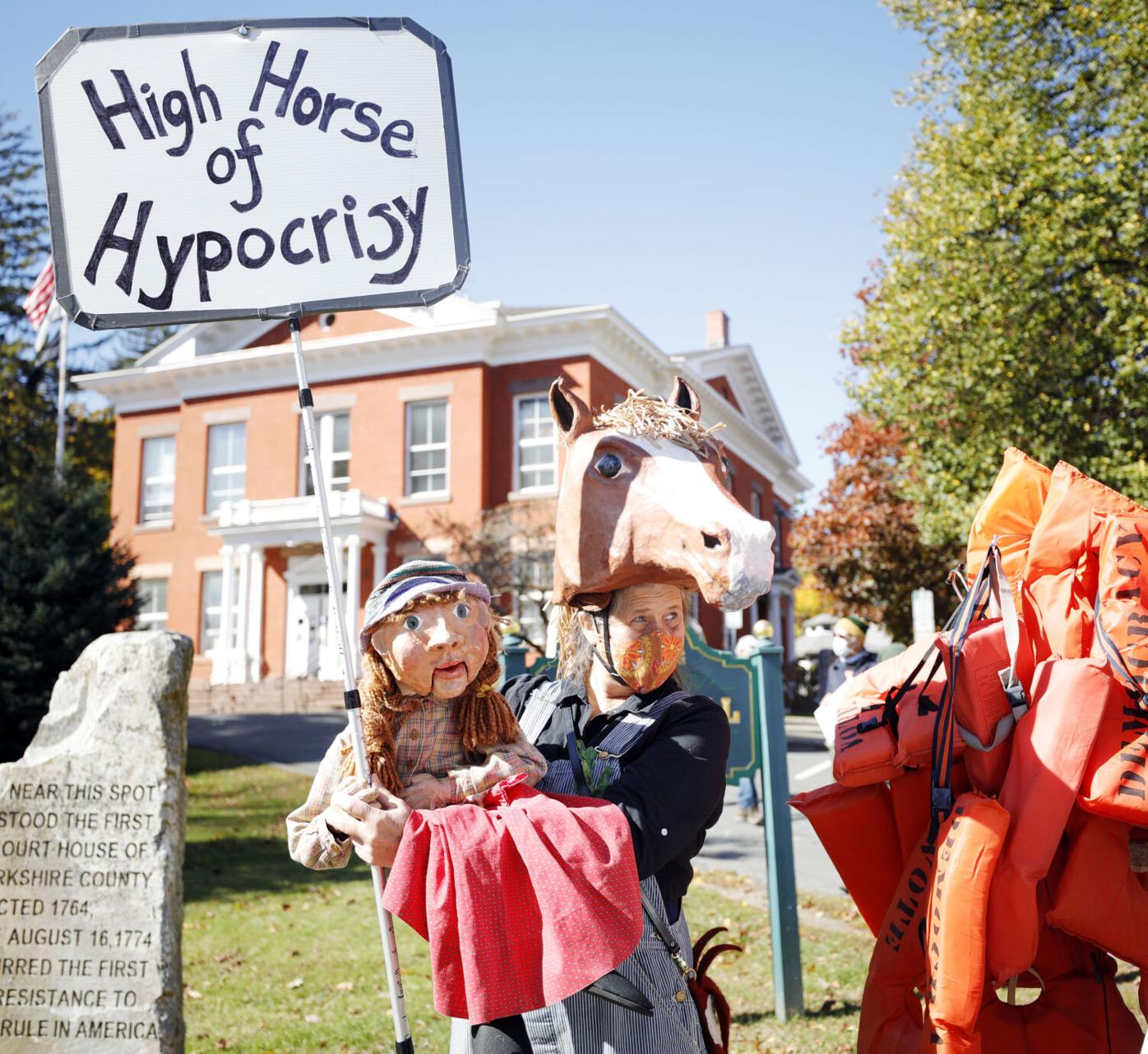 Above: Meredyth Babcock, with puppet “Robin” on her hand and “Maggie Sawhorse” on her head, gathers with a crowd of community members outside Town Hall in Great Barrington for a women’s rally last Saturday. The rally was held in coordination with other women’s marches and rallies around the nation to encourage voting in the November election and to oppose the pre-presidential election filling of the Supreme Court seat left vacant by Ruth Bader Ginsburg’s death. Inset: Babcock takes to Washington, D.C., to protest the nomination of Amy Coney Barrett to the Supreme Court.

BECKET — The most political horse in the town of Becket is, most definitely, out of the barn.

Babcock journeyed with her alter egos to Washington, D.C., and joined protests directed at the U.S. Senate’s confirmation hearings for a Supreme Court nominee Judge Amy Coney Barrett. A short documentary shot by the puppeteer’s sister, Rachel, captured Babcock’s interactions on the streets of the nation’s capital.

Last weekend, Babcock and her puppets did some politicking closer to home, joining a women’s march in Great Barrington.

In an interview, Babcock said that she and her characters were itching to play in a bigger corral.

“She’s pretty political. She has strong beliefs about naming things,” Babcock said, speaking of Maggie Sawhorse, the character she sculpted herself decades ago. “She decided that she wanted to come out of the basement and go to D.C.”

On D.C.’s streets, Babcock traveled fully concealed by the headpiece that represents Maggie. That anonymity helps loosen her tongue, she says, though it is through Robin, the child in her arms, that she speaks her mind, posing the sorts of questions that could have fit the old TV comedy show “Kids Say the Darndest Things.”

“I do get to hide out under her,” Babcock said of the characters. “As soon as I go somewhere with a horse head [on], I can’t stop myself.”

In this brand of street theater, Robin is the inquisitor, aided and abetted by a supportive Maggie, who whinnies explanations to the little child puppet.

As Babcock knows, children can speak with disarming candor, a quality that seems suited to an overheated political culture.

Of course, it’s the child in the puppeteer coming up with those questions.

“I do get to hide out under her. As soon as I go somewhere with a horse head [on], I can’t stop myself.”

Speaking of fear, she believes that horses — because they can become subject to human whims and cruelty — are good judges of people. Horses sense whether people are whisperers, or shouters, or worse. With that in mind, Babcock rode down inside the Beltway.

In D.C., this little troupe chanted “no confirmation before inauguration.”

“That’s what we’re here to demand. This is so full of hypocrisy in so many ways,” Babcock said.

Or was that Maggie?