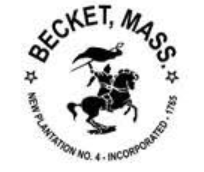 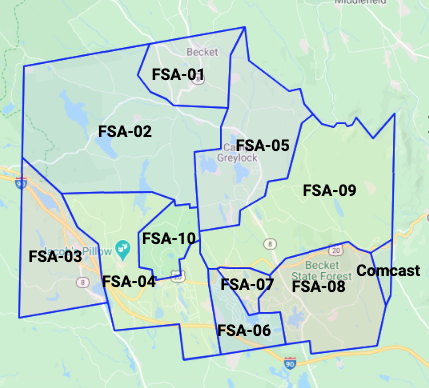 A view of the fiber-optic service areas planned for Becket broadband.

BECKET — Becket’s administrator calls it the town’s “most anticipated news.” The community is ready to build its own fiber-optic broadband network, after years of volunteer labor, millions of dollars in state grant awards and a recent rough patch in preliminary work.

Next week, officials will gather at the fire station in North Becket Village to celebrate the start of 18 months of construction, nearly 3½ years after the state committed initial funding for a town-owned system.

Crews with Sertex will work over the winter to string fiber-optic cable that eventually will be able to reach 1,800 homes. One by one, 10 service areas will be completed and tested, paving the way for actual internet connections. Each service area will come online after testing and as “drops” are provided that connect homes to the network.

“We’re hoping that the first homes will be connected in the early spring,” said Robert D. Gross, the town resident serving as manager of Becket’s Municipal Light Plant.

Gross said progress slowed in the past year when it was discovered that some utility poles had not been properly prepared to receive the fiber lines during what is known as the “make ready” stage. The town of Washington faced a similar delay.

To make sure the poles in Becket were, in fact, ready, the town’s project manager, Westfield Gas & Electric, surveyed the system with a utility crew, traveling the community’s approximately 100 miles of roads. The Westfield outfit operates a broadband unit known as Whip City Fiber.

“That was a further delay for us,” Gross said of the task of verifying that poles were ready.

The need to provide connections through underground lines also complicated the project, Gross said, including in one of the town’s largest developments, Becket Woods. In that case, the electrical utility, Eversource, opted to tackle trenching work for its lines that also could accommodate conduits for the fiber-optic cable.

“We’re hoping that the first homes will be connected in the early spring.”

Residents can follow progress of the build, check pricing, learn how to sign up and get answers to frequently-asked questions at becketbroadband.org.

Two packages are offered, one providing gigabit connection speeds, for $84 a month, and another limited to 25 megabits per second — that’s the federal standard for broadband — for $68 a month.

Digital phone service will be available for an additional fee. The town is covering the first $2,000 cost of reaching homes with fiber. Gross said the town hopes to have 60 to 70 percent of potential customers sign up.

The website also allows residents to determine which fiber service area they live in, and discover its order in the construction project.

The town says that, in deciding where to build first, the Select Board gave preference to areas that had the lowest current rate of access to the internet, the most interest expressed in new service (through a 2019 survey) and technical requirements of the work.

As of now, the state says it has contributed $3,078,917 to Becket’s broadband project. The town is one of about a dozen unserved communities that decided to build a municipally owned network in the campaign spearheaded by the Executive Office of Housing and Economic Development and the Massachusetts Broadband Institute.

Other towns with municipal networks in Berkshire County include Alford, Mount Washington, Otis, Washington and Windsor.

Work is complete in Alford and Mount Washington. Installations continue in Otis, Washington and Windsor, according to the broadband institute.

One the Becket Broadband network is complete, WiredWest, a consortium of towns, will serve as the internet service provider. WiredWest will subcontract some of its services to Whip City Fiber.

Members of the Broadband Ad Hoc Committee that handled planning include Gross, the retired entrepreneur and retailing executive who jokes that he drew “the short straw” in becoming the Municipal Light Plant manager. Other members are Jeremy Dunn, Chuck Garman, Dave Labrecque, Dan Parnell, Jeff Piemont and Cris Sanchez.

WASHINGTON — Kent Lew should be out of pencils by now. "I had to do a lot of pencil-sharpening," says Lew, the town of Washington's broadband maestro. When Washington decided to own its …