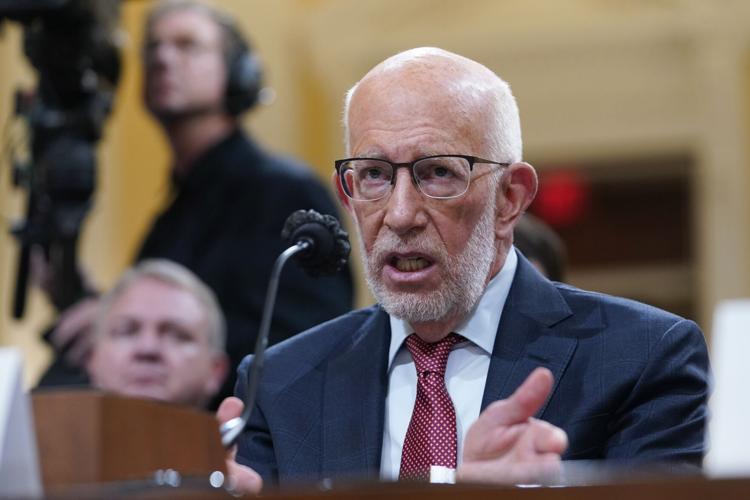 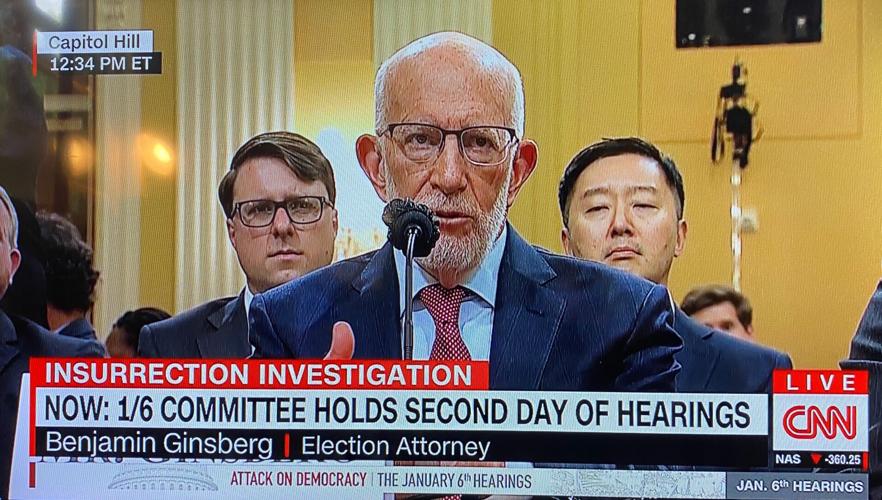 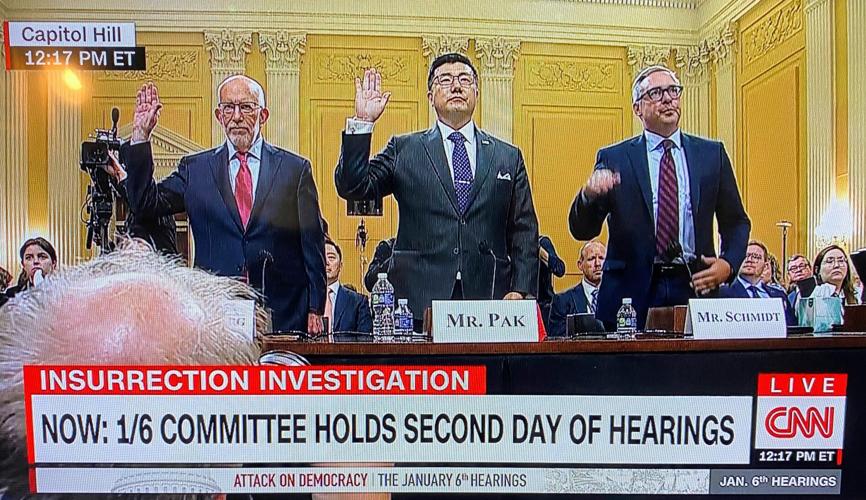 Attorney Benjamin L. Ginsberg, left, is sworn in Monday before the House panel investigating the Jan. 6, 2021, insurrection at the U.S. Capitol. Also testifying were BJay Pak, the former U.S. attorney for the Northern District of Georgia, at center, and Al Schmidt, a former Philadelphia city commissioner.

A man with Berkshires ties, introduced to Congress and the nation as “the most prominent” Republican lawyer handling voting cases, said Monday the Trump campaign utterly failed to make its case of irregularities with the 2020 election.

Attorney Benjamin L. Ginsberg was questioned for roughly seven minutes by a member of the House panel investigating the Jan. 6, 2021, insurrection at the U.S. Capitol. He then joined a CNN panel at 1:30 p.m. for a recap of the day's topic.

"They didn't accept the defeat. And that's a lot of the trauma that the country continues to go through today," he said on CNN. "In my mind, it's not there yet as a criminal case."

Ginsberg, who worked as a news reporter for The Berkshire Eagle from 1975 to 1977, briefed the committee on the Trump campaign’s efforts to overturn President Joe Biden’s victory in November 2020.

In one exchange, Ginsberg was asked by U.S. Rep. Zoe Lofgren, D-Calif., whether any court found merit in the campaign’s claims of voting fraud.

“No, there was never that instance,” Ginsberg said.

The following is a transcript of Ginsberg’s appearance before the panel:

Zoe Lofgren: “We have a renowned legal expert here to address the Trump campaign’s activities in court. Mr. Ginsberg, you spent your entire career representing Republicans in election-related litigation. … I think it's fair to say you're the most prominent Republican lawyer who's litigated in the election field and you've analyzed the Trump campaign's litigation pretty carefully.

Benjamin Ginsberg: “In the normal course of things, any campaign on the night of the election, and in the days after, will do a couple of different things. One is that they'll analyze precinct results to look for abnormalities in the results and they'll send people to those precincts to ask more questions.

“Secondly, all campaigns will have poll workers and observers in the polling place. And so campaigns will talk to those people [and ask] if they saw any irregularities that could cause problems in the election.

“Now the Trump campaign talked pre-election about having 50,000 poll workers, so presumably they did have eyes on the ground in all these places.

“And so in the normal course of things a campaign will analyze the reports that come in. The Trump campaign had a couple of basic problems, however.

“They did have their day in court."

“Number one, the 2020 election was not close. In 2000, that was 537 [votes in Florida] and close. In this election, the most narrow margin was 10,000 and something in Arizona, and you just don't make up those sorts of numbers in recounts.

“And when the claims of fraud and irregularities were made, you've heard very compelling testimony from [former Trump campaign manager Bill] Stepien … about those claims and how they didn't believe that put the Trump campaign on sort of a process of bringing cases without the actual evidence that you have to have in which the process is designed to bring out."

Zoe Lofgren: “So are you aware of any instance in which a court found the Trump campaign's fraud claims to be credible?

Benjamin Ginsberg: “No, there was never that instance. In all the cases that were brought — I've looked at the more than 60 that include more than 180 counts — and no, the simple fact is that the Trump campaign did not make its case.”

Zoe Lofgren: “The Select Committee has identified 62 post-election lawsuits filed by the Trump campaign and his allies between Nov. 4, 2020, and Jan. 6, 2021. Those cases resulted in 61 losses. … Despite those 61 losses, President Trump and his allies claim that the courts refused to hear them out – and as a result, they never had their day in court.

“Mr. Ginsburg, what do you say about the claims that Mr. Trump wasn't given an opportunity to provide the evidence they had of voter fraud [and] that they had, in fact, their day in court?”

Benjamin Ginsberg: “They did have their day in court. About half of those cases that you mentioned were dismissed at the procedural stage for a lack of standing [or], the proper people didn't bring the case or there wasn't sufficient evidence and it got dismissed on a motion to dismiss.”

“There was discussion of the merits contained in the complaints and in no instance did a court find that the charges of fraud were real.

“It's also worth noting that even if the Trump campaign complained that it did not have its day in court, there have been post-election reviews in each of the six battleground states that could have made a difference. [In] each one of those instances, there was no credible evidence of fraud produced by the Trump campaign or his supporters.”

Zoe Lofgren: "Now as Mr. Ginsberg has explained, there are no cases where the Trump campaign was able to convince a court that there was widespread fraud or irregularities in the 2020 election.

“Over and over, judges appointed by Democrats and Republicans alike directly refuted this false narrative. They called out the Trump campaign's lack of evidence for his claims.

“And the judges did that even in cases where they could have simply thrown out the lawsuit without writing a word.

“As we've just heard from perhaps the most preeminent Republican election lawyer in recent history, the Trump campaign's unprecedented effort to overturn its election laws in court was a deeply damaging abuse of the judicial process. As stated by U.S. District Court Judge David Carter, this was ‘a coup in search of a legal theory.’"