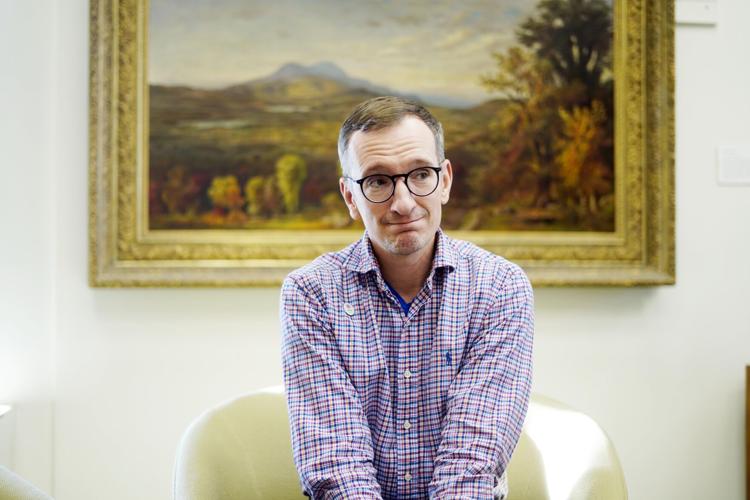 Alex Reczkowski, director of the Berkshire Athenaeum, recently changed the library's loitering policy in response to a fire that damaged a window and sidewalk at the building. Reczkowski, pictured here in October, has enacted policies to assist homeless people in Pittsfield during his tenure. 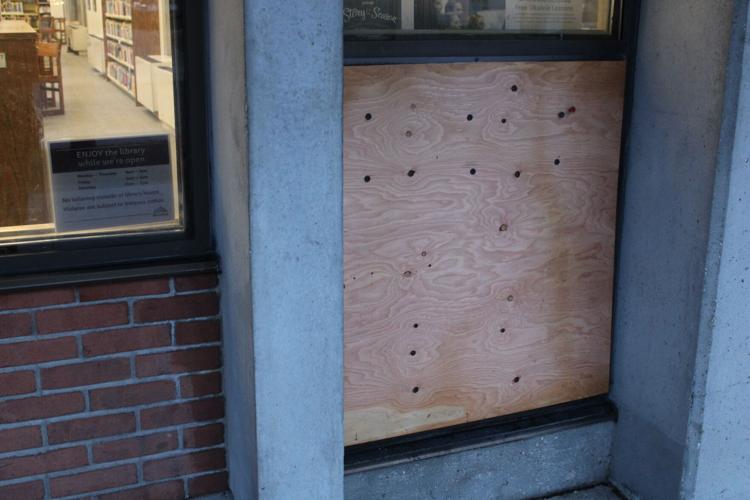 The window that was damaged in a Nov. 21 fire at the Berkshire Athenaeum has been replaced with a piece of wood. Sidewalks near the window still have burn marks from the blaze.

PITTSFIELD — The Berkshire Athenaeum has ended a policy that enabled people to camp outside the property, following a fire that shattered a window at the building Nov. 21.

The library’s previous policy not to oppose overnight loitering made it a safe haven for those living on the street.

Alex Reczkowski, the library’s director, said the decision was made to ban loitering outside the library after consultation with the Pittsfield Police Department, the library’s board of trustees and the office of Mayor Linda Tyer.

The move has involved employees at the library informing people about the policy at and around closing time, 9 p.m. throughout the week and 5 p.m. on Fridays and Saturdays. The library is closed Sundays, which will restrict people from hanging around the building at any time.

Pittsfield police have added the library to patrol routes, although they’re only informing people of the policy, Reczkowski said.

The policy, as it stands: “If we’re not open, you shouldn’t be here,” Reczkowski said.

Reczkowski said the number of homeless people sleeping outside the library on a given night was between six and 10, but fluctuated depending on the night.

The Athenaeum has become a hub for resources for homeless people in Pittsfield and a place for many to spend time. Since restricting overnight stays, the number of homeless people at the library has gone down, but it remains a place for people to find help during the day.

The library’s main function will be referring people to services around the city, including ServiceNet and the network of food pantries and available meals. In some ways, it’s a continuation of what the library has been doing. Reczkowski and the staff regularly informs those at the library about the St. Joseph’s Shelter operated by ServiceNet.

“We’ve had this approach all along to leverage our community partners to offer alternatives to people sleeping here,” Reczkowski said.

Still, removing a place for people to stay wasn’t something Reczkowski wanted to do.

“Folks that were spending time here were really accepting and understanding that we couldn’t allow it anymore,” Reczkowski said. “When I was putting the signs up, they said ‘Alex, you’re doing the right thing. You’ve gotta do this. You’ve gotta look out for the library.’”

Those signs read: “ENJOY the library while we’re open … No loitering outside of library hours. Violators are subject to trespass notice.” The signs can be found around the Athenaeum.

According to press logs from the Pittsfield Police Department, the outside fire was reported at 6:26 a.m. Nov. 21. Reczkowski said someone’s bedding caught fire outside, then spread to a cart containing more bedding, charring parts of the sidewalk. Damage to the building itself was limited to the broken window.

When Reczkowski arrived, the fire had been extinguished. He spoke with first responders, trying to find out what had happened, then picked up a broom and helped the library’s custodian with the cleaning effort.

Others nearby joined in.

“Some of the folks, particularly one of the folks who had slept outside here, did help with the cleanup,” Reczkowski said. “Sweeping and shoveling and helping to clean up, too … that was heartening.”

The sidewalk outside was power-cleaned Monday. Some burn marks remain and a piece of wood is in place where the window had been.

Reczkowski said restricting overnight stays at the library would likely result in people moving to other locations downtown – partly the reason that a similar policy hadn’t been enacted before.

“One of the reasons I resisted over the summer is that I knew it would move along to the neighbors,” Reczkowski said. “But also because I knew the more we’re forced to face this challenge, the more likely we are to want to find a solution.”

When asked, Reczkowski said it is unlikely the library will reconsider the new policy. But he said it doesn’t reflect a “change of heart” on his end. Just a change in situation.

“This changes the game, in a certain way,” Reczkowski said. “I hope this isn’t the end of the conversation.”