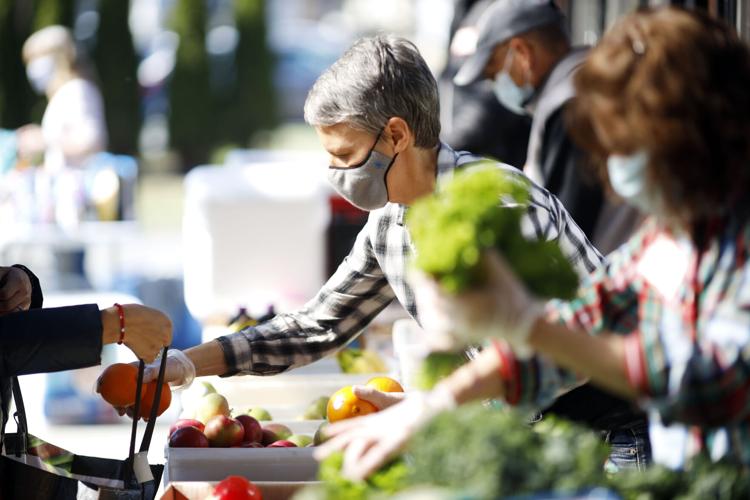 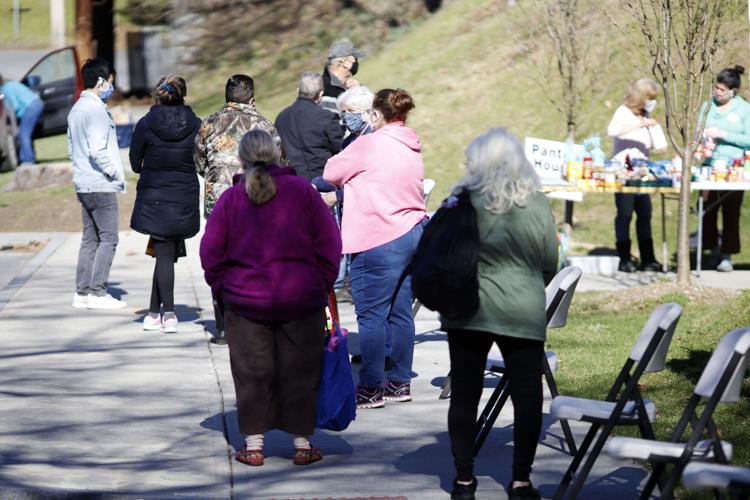 A line forms outside at The People’s Pantry in Great Barrington last year.

Food pantries from one end of Berkshire County to the other are seeing a jump in the number of people struggling to afford groceries.

“We’ve never had to ask for money; people just gave us money and we have almost no overhead —the space is donated by St. James, and over one-third of our food is free to us.” Anne Hutchinson, vice president of operations, The People's Pantry at St. James Place in Great Barrington

The pandemic set off an initial hike in people lining up at food banks and meal centers. Now, the need for food is widening and deepening in the region, with sharp inflation and an end to some pandemic relief benefits.

Those with moderate incomes who don’t qualify for government nutrition assistance like SNAP are in a pinch, said Anne Hutchinson, vice president of operations at The People’s Pantry at St. James Place in Great Barrington.

At the same time, others don’t qualify for a subsidy because they aren’t citizens. Hutchinson said the pantry is seeing a sizable new population of larger families who have recently arrived in the area from Central America or are out of work due to the pandemic.

PITTSFIELD — Each week, dozens of volunteers assemble and distribute milk, bread, eggs, fresh produce and canned and frozen goods at the back …

The number of people served at St. James Place has tripled since February 2020. It now provides food to about 2,000 people a month, using donated food and other supplies, as well as the stock it buys, usually at a discount, Hutchinson said.

The pantry is asking for financial donations for the first time.

“We’ve never had to ask for money,” Hutchinson said. “People just gave us money and we have almost no overhead — the space is donated by St. James, and over one-third of our food is free to us.”

The Berkshires and all of western Massachusetts saw food pantry visits rise 15 percent from January to March, said Lillian Baulding of the Western Massachusetts Food Bank. The county’s free meal kitchens alone saw a 34-percent increase in those attending.

Pantries and meal sites in Pittsfield, North Adams and Williamstown are seeing it firsthand.

“The numbers have escalated in the last three weeks,” said Monsignor Michael Shershanovich, pastor at St. Joseph’s Church in Pittsfield. “At least 25 percent.”

The number of people served averages around 75 every week; six new people came last week. There are other changes.

“A lot of the new people coming are homeless,” he said. “Before it was just families.”

Numbers also are up at the Berkshire Food Project in North Adams, which is now serving 80 to 90 households on each of its three days of operation a week, said Mark Rondeau, the project’s executive director. He said their work eased up for a time.

“The numbers went down when the relief checks came in,” he said.

The Community Bible Church pantry in Williamstown had around 268 people visiting each month before the pandemic, said Phyllis Babcock, who runs the program. That swelled to 418 in April of 2020, went back to pre-COVID numbers by January 2022, then rose again last month to 343 people, she said.

Back in Great Barrington, The People’s Pantry is working to create a sense of community, as people wait for the distribution of food. They serve donated coffee from Dunkin’ and cookies provided by the Taft Farm to ease a sense of hardship.

Hutchinson, who directs operations, said she is seeing a degree of family vulnerability that is new to the pantry with the increase in people who have recently arrived from Central America and don’t speak English. “They’re really stressed and have had horrible trips coming up here and they often have less than nothing,” she said.

She said the pantry has ordered different foods for the immigrant families, who tend to cook for a lot of people and for whom the food provided isn’t just supplemental.

“They don’t want a can of beans; they want a pound of dried beans,” Hutchinson said, noting that the pantry gives out 100 pounds of rice a week.

Some of the increased use stems from referrals from area nonprofits, which steered families in need of food to local resources.

Hutchinson also said the pantry wants homeless clients to visit on both days the pantry is open, whereas most people go once.

For the first time in two years, the Berkshire Food Project is having a sit-down meal. It'll be turkey, of course

Since the pandemic's onset, the Berkshire Food Project in North Adams has been distributing meals and groceries entirely to-go several times a week from the church. That's about to change.

While we are out from under the worst of COVID-19, we are still in the process of taking back many of the things we took for granted before suddenly losing them more than two years ago. Whenever our community reclaims those priceless gems of social joy — especially on behalf of our neighbors in need — it is worth celebrating.