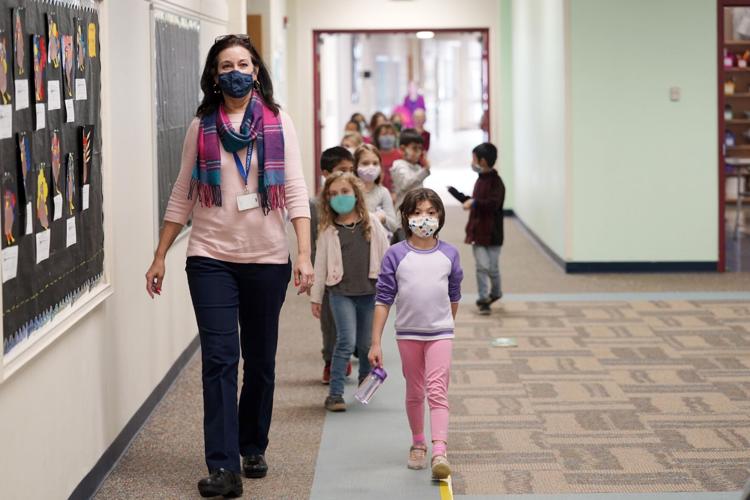 Jennifer Annand leads her first grade class back to the classroom after lunch at Muddy Brook Elementary School in Great Barrington in July 2021. Amid the pandemic, Berkshire County schools were grappling with staffing levels and few substitute teachers to turn to. 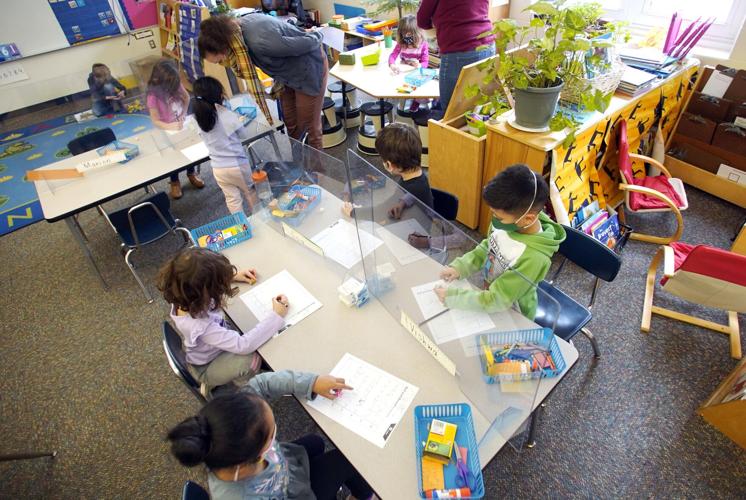 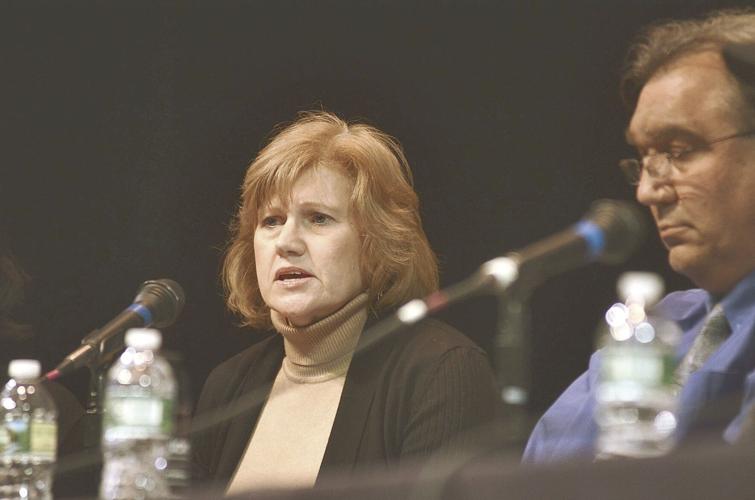 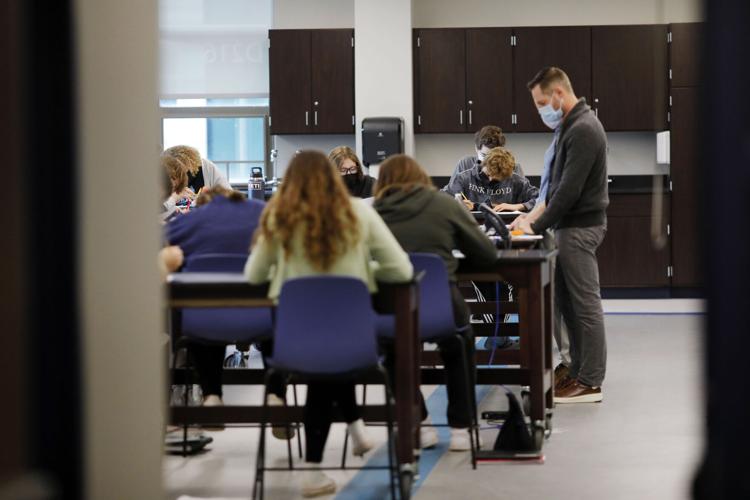 Students and teachers at Wahconah Regional High School in Dalton. In a 2021 EdWeek Research Center survey, the majority of school districts nationwide said they were having issues with staffing.

With its list of substitute teachers looking "pretty spare" this school year, North Adams Public Schools turned to a job fair in November with hopes of filling some positions.

Just two people turned out to the fair.

"Everybody is looking for people to fill these positions. Those who are willing to do the job are in demand and can, in fact, shop around."

In a 2021 EdWeek Research Center survey, the majority of school districts nationwide said they were having issues with staffing. The position most districts struggled with: substitute teachers. Seventy-seven percent of districts who responded to the survey said they struggled to hire enough this school year.

The district then tried another approach. In mid-December, the School Committee voted to raise pay for substitute teachers, from $80 per day to $115 per day, according to draft meeting minutes. The daily pay is for a six-and-a-half hour school day, and Malkas said rates were raised to stay competitive with surrounding school districts.

"I would love to say that is what did it — it's been magic and now we have plenty of people applying to be substitute teachers," Malkas said. "That's not the case. We're still experiencing shortages, and that's across domains," Malkas said, adding that there's also a need for positions like substitute custodians and substitute cafeteria workers.

North Adams schools are far from alone. In a 2021 EdWeek Research Center survey, the majority of school districts nationwide said they were having issues with staffing. The position most districts struggled with: substitute teachers.

Seventy-seven percent of districts who responded to the survey said they struggled to hire enough this school year.

A lack of substitute teachers was a challenge for Berkshire Hills Regional School District before the pandemic.

"Even in a typical year we don't have enough subs. In an ongoing pandemic, it's significantly harder," Superintendent Peter Dillon said. "On any day, we could have between two and six teachers out in each building. And we're able to fill some of those with subs and some of them with other staff covering in the building.

“We ask administrators to step in. We ask our teachers who are willing to give up their prep period for compensation. Which is not great, people do need those prep periods. ... You worry about, are you burning out the people who are already here and doing the job by doing that? You have to be careful about running the well dry."

But it's hard, and it creates a cycle where if people are covering for their peers, then they are getting exhausted which then potentially could lead to more absences or a greater need for subs."

In November, Dillon put out a call to 1,500 people, mostly families in the district, advertising a variety of open positions, including in substitute teaching and custodial work.

Need a job? Thanks to the pandemic economy, Great Barrington public schools have plenty.

After that, the district gained six or eight people, Dillon said. He added: “And it also provoked some conversation around compensation."

The district still has open permanent positions, too, and at the School Committee, they are talking about “increasing pay in the hardest to fill positions,” Dillon said.

At Hoosac Valley Regional Schools, there is a possibility of “the need for an emergency closure if we cannot adequately staff our schools safely,” Superintendent Aaron Dean wrote in an online update on Jan. 2. He did not reply to a phone call or email seeking comment.

“Our district has been short staffed in some areas since the start of the 2021-2022 school year, and staff absences continue to rise,” Dean's update said. “The increase in COVID cases makes it more likely that we will struggle to staff all our schools every day over the next several weeks. This may cause disruptions for students, families, and staff as we work to prioritize our highest areas of need.”

Are you burning out the people who are already here?

Amid the pandemic, there's also a greater need for substitute teachers, Malkas said. "We have a higher incidence of people calling in because people are either themselves sick, they are caring for a sick family member or they've been identified as a close contact and they have to quarantine."

In North Adams, each school has a staff member who creates a "matrix" each day for class coverage, Malkas said, comparing it to a chess board. In the past, that was an easier job to do, she said. "Now it has really become a challenge.”

So what happens when there isn't a substitute teacher available?

“We ask administrators to step in," Malkas said. "We ask our teachers who are willing to give up their prep period for compensation. Which is not great, people do need those prep periods. ... You worry about, are you burning out the people who are already here and doing the job by doing that? You have to be careful about running the well dry."

Across the country, two-thirds of schools without enough employees are resorting to asking staff to take on more work, the EdWeek survey found.

With many open jobs on the market, people have other options, Malkas said. "Being a substitute teacher is not necessarily easy work. Supervising children, you imagine supervising one or two, now imagine supervising 22 children ... You might be able to find something that's not going to have that level of responsibility that pays you about the same per hour."

The job also exposes you to a larger number of people, and cases of COVID-19 in the county are increasing. North Adams schools announced more than 50 cases in the district several days after returning from winter break.

With the omicron variant, Dillon said, "folks are wondering, they are doing the cost-benefit analysis. They want to earn some money but is it worth putting themselves at risk?"

Sandi Amburn — a middle school paraeducator in Pittsfield and president of the Pittsfield Federation of School Employees, the union that represents paraeducators, bus drivers, cafeteria workers, custodial workers and secretaries — said she has spent most of her time substitute teaching this year.

“I can count on my hands maybe the weeks since September that I've done my actual para job," Amburn said. She said she had six classes in an auditorium on Tuesday when a number of teachers were out.

When paraeducators substitute, it ends up leaving a gap for teachers in their classrooms, said Melissa Campbell, a math teacher at Herberg Middle School in Pittsfield and president of the United Educators of Pittsfield, the union that represents classroom teachers, guidance counselors, nurses, and other positions.

When the schools can't find substitute teachers, they turn to paraeducators, Pittsfield Public Schools Superintendent Joseph Curtis said. "A sub for the para has been rarely available this school year," he said in an email to The Eagle.

At times teachers are subbing for other classes, Curtis and Campbell said.

Teaching remotely was difficult last year, but “this is the hardest year I've ever had," Campbell said.

Campbell and Amburn said there are staffing challenges for both permanent and substitute positions in the district that make the situation difficult.

Given current rates of COVID-19, "I think people are hesitant," Campbell said. "Why would I want to come into a building full of kids?"

Pay is also a challenge, Campbell said. "It’s good for somebody who wants to work one or two days week," Campbell said of subbing.

Masks will remain required indoors in Massachusetts public schools through at least the end of February.

COVID-19 cases have been low in Lenox public schools, but many parents seem to be keeping their kids home anyway

Lenox Superintendent Marc J. Gosselin has appealed to parents to overcome COVID concerns and send their kids to school since cases have been few and mostly occurred during the holiday break.

Teachers need emotional support now more than ever. A new pilot program between MCLA and North Adams Public Schools is trying to help

The school district plans to spend 5.56 percent more than they did last year, costs that will be covered by an expected bump in state aid.