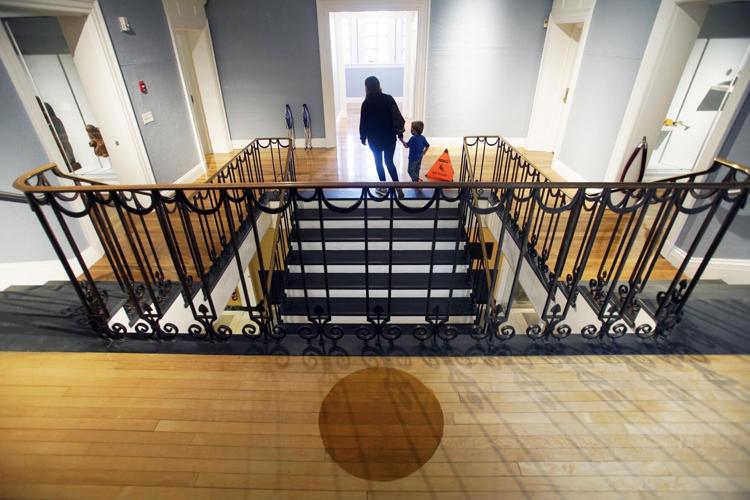 Above: After the renovation of the second floor of the Berkshire Museum, daylight can be seen at the top of the stairs. Also, a circle of varnish denotes where the Lost Pleiad sat for decades. Below: The Pittsfield Town clock is part of the new “Objects and Their Stories” exhibit. 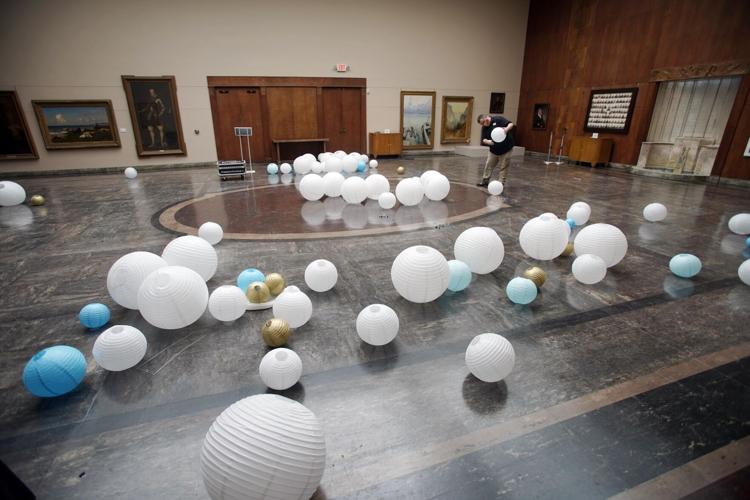 A museum worker cleans decorations from a reception in the Crane Room at the Berkshire Museum. 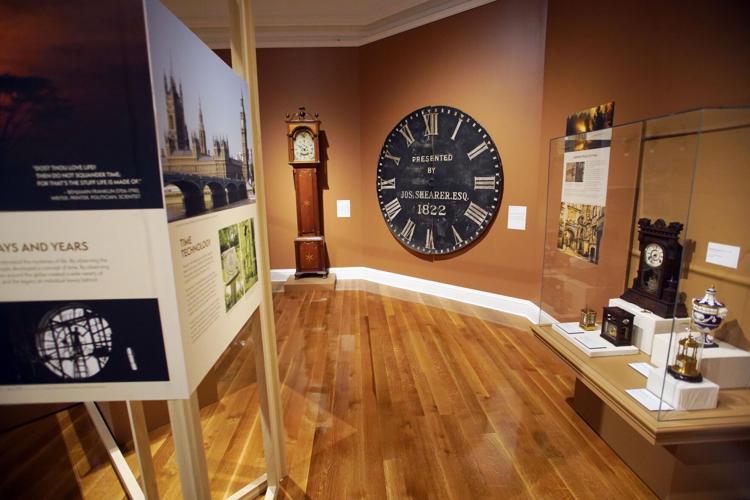 The Pittsfield Town clock is part of the new “Objects and Their Stories” exhibit. 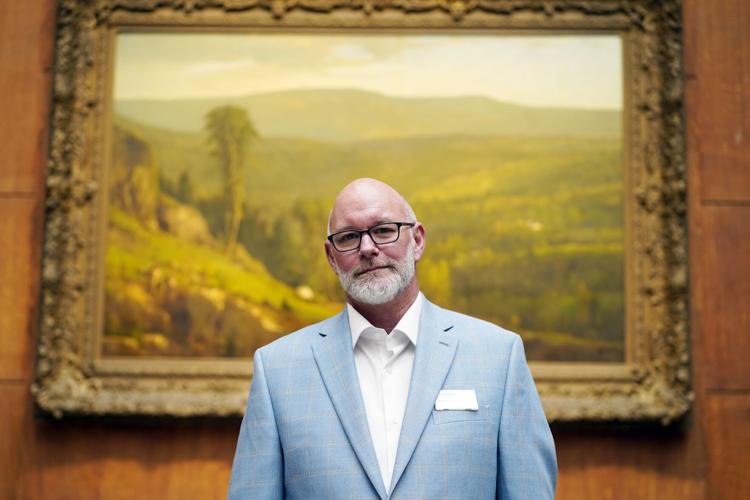 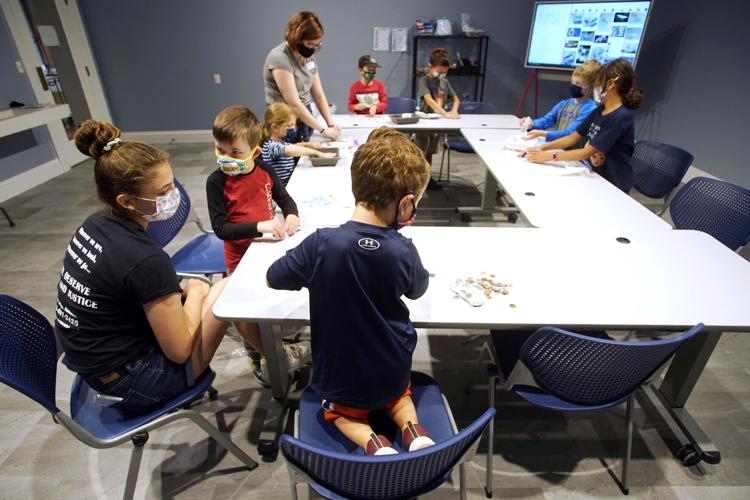 The second floor of the Berkshire Museum now has modular classrooms in a space once taken up by a catering kitchen.

PITTSFIELD — Over the last 15 months, work crews laid hands on the handsome building that houses the Berkshire Museum, bugled in to fix old problems and, after a major sale of art, to help the institution redefine its place in local culture.

“We finally have some amenities here that never existed.”

On Friday, the museum reopens its second floor after $3.5 million worth of renovations funded by the sale, in 2018, of 22 of its most valuable objects. Raising tens of millions of dollars, museum leaders said in the face of criticism at the time, was needed to save the place from financial collapse and structural decay.

Art sale proceeds paid for all the construction in and around the 39 South St. property the past year.

As visitors climb a flight of marble steps to the museum’s main exhibition halls, they will find a dramatically refreshed space, from newly laid wooden floors to reconstructed walls now able to hold back winter’s cold.

Ahead of them, as they ascend, lie a newly constructed art studio, science lab, two bathrooms, “pocket galleries” and, where a staff kitchen once stood, a quiet public sitting area through which light streams.

“We finally have some amenities here that never existed,” said Jeff Rodgers, the museum’s executive director, in a tour this week, ticking off all the changes. “All of that together is the rebirth of the second floor.”

Here are seven things to know about the museum’s big reveal:

It’s essentially the same second floor, but the floor no longer creaks. Walls don’t weep due to inadequate insulation and climate control. While exhibit rooms now gleam, under strings of programmable LED lights that show off new white oak flooring, the basic layout is the same, except for the new spaces mentioned above.

In an earlier phase of work led by Allegrone Construction Co., costing $2 million, the museum installed a new sewer line, waterproofed its foundation, set new drains channeling stormwater and expanded its freight elevator. That elevator now reaches the second floor, enabling the museum to bring large objects to its main exhibit floor for the first time.

(Spoiler alert: That will include the mock submarine coming in January for “Voyage to the Deep,” an interactive exhibit designed for young audiences inspired by Jules Verne’s 1870 book “20,000 Leagues Under the Sea.”)

The second phase of work, led by Salco Construction Co., rebuilt the interior spaces upstairs. Crews took some walls down to their studs to replace old plaster with heavy-duty wallboard that sits atop plywood and steel framing more suitable to changeable museum displays. By insulating its outer walls, the museum can better care for rare objects sensitive to heat and humidity. The redesign was shaped by Bradley Architects and Berkshire Design.

2. HOW MUSEUM PAID FOR IT

The museum used proceeds from the $53.25 million it took in from the sale of artworks in 2018 to finance infrastructure repairs and remodeling. That big nest egg, secured after a court battle resolved by the Attorney General’s Office and a justice with the Supreme Judicial Court, will also help the museum tackle the next project: a first-floor revamp. (More on that below.)

The new endowment is also kicking in about $1 million to the museum’s operating budget — fully half of what Rodgers calls its current “austerity” spending during the pandemic. To prepare for future building needs, the museum is allocating $300,000 a year into a reserve fund.

3. A MUSEUM IN MOTION

At the Berkshire Museum, they want you back. And then back again.

Rodgers says the museum’s exhibit spaces, even just sections of them, are designed now to turn over regularly, quarterly at least. He anticipates the museum could see a full changeover in what it is presenting every two years.

A key tool: The museum bought 30 “mobile museum units” that can be outfitted with small displays — and even travel to audiences elsewhere. It is also using tables that can be rolled into position with chairs and workspaces, to promote hands-on engagement with exhibits.

“Everything can move from here to anywhere else, including our tech. Everything is designed to be mobile,” Rodgers said. “Adaptability and mobility. Those are the watchwords now.”

Returning patrons, in case you’ve been wondering: The exhibit space housing “Objects and Their Stories” is showing two of the museum’s most popular holdings: a mummified Egyptian and the preserved head of a famous moose.

“We wanted to bring Old Bill back out because he was a local favorite,” Rodgers said. Old Bill is the nickname for the moose that was killed in 1920 and had been part of a herd on the private estate of William C. Whitney on land that’s now part of the October Mountain State Forest.

Old Bill looks out from a perch on an interior gallery wall, with other animal trophies. The other old favorite, the mummified person known as Patah, lies prone in a glass enclosure in the adjoining room.

“There are things that people simply expect to see when they are here,” Rodgers said.

The “new,” Rodgers said, will be shown both in free-standing exhibits, like the one now featuring photographs of Bhutan by local artists Dan Mead and Sally Eagle and by using elements of the museum’s 40,000-item collection to tell new stories.

“The goal is not to have one way of looking at those objects. So you’re learning new things about it. [The museum] becomes an ongoing, living, adaptive environment,” he said.

That includes “Winged Victory,” the museum’s reproduction of the Hellenistic sculpture that lives at the Louvre in Paris. It took the museum four days to move “Nike,” as the work is also known, inch by inch using a portable crane. “There’s no way to take her off of display,” he said.

Much more easily moved: Six of the nine toys created by artist Alexander Calder, now tucked into a new display in one of the new “pocket” galleries.

Decades of collecting, acquisitions and gifts turned the Berkshire Museum into a significant regional attraction. Today, the museum’s main focus, Rodgers says, is to help visitors ponder the world around them by showcasing things from its holdings of roughly 40,000 objects.

“We cannot be a museum that’s collecting in all the areas that this museum has holdings in,” Rodgers said. “We’re really a storytelling museum. We’re not a collecting institution. We’re an idea place.”

All the roughly 1,400 objects now on exhibit represent less than 4 percent of the museum’s collection.

Who’s listening to those stories? The museum had been averaging 60,000 visitors a year.

Rodgers arrived in April 2019, after the departure of Van Shields, the executive director who initially led the museum board’s deaccession of art and after the controversial sales were completed. The current director’s guiding document, though, is the master plan that gave rise to the art sales.

The plan called for the museum to heal its building woes and, citing responses from surveys and focus groups, shape new exhibits that made greater interdisciplinary use of its collection — minus the art works that were sold, including two acclaimed paintings by Norman Rockwell that the artist gave to the museum.

As of this week, the center of the second floor, the wood-paneled Ellen Crane Memorial Room, still awaits its TLC. A plan first presented by Shields called for the Crane room to be dramatically remodeled.

Today, that plan has been scuttled, and the room, which sits beneath a ceiling of glass tiles, will be refreshed rather than remaindered. “It’s architecturally and artistically important,” Rodgers said of the space, named for a relative of museum founder Zenas Crane. “The goal is to bring it back to its original glory. We simply want to restore what we have.”

Designers are working to improve the room’s acoustics and will replace its flooring, a kind of rubberized tile.

Next week, the museum will announce that it has hired a Cambridge company, IKD, to lead planning for its first-floor renovations, with a concept and schematics to be ready by the end of next year. As part of that, some or all of the aquarium, now in the basement, will move to the first floor. Also ahead: work on the museum’s theater.

In their own words: Stockbridge-Munsees share past. present and future in 'Muh-he-con-ne-ok: People of the Waters That Are Never Still'

The history of the Muh-he-con-ne-ok — past, present and future — flows softly, subtly through a newly renovated second-floor gallery at the Berkshire Museum.

This new exhibit, on view through Jan. 9, 2022, tells the story of the Stockbridge Mohicans, the Indigenous residents of The Berkshires and Hudson River Valley, from their initial meetings with European settlers through the present day.

Jeff Rodgers is out as executive director of the Berkshire Museum. His reason for leaving is not clear in a statement from the Pittsfield museum.

Kimberley Bush Tomio has been named the Berkshire Museum's next executive director.