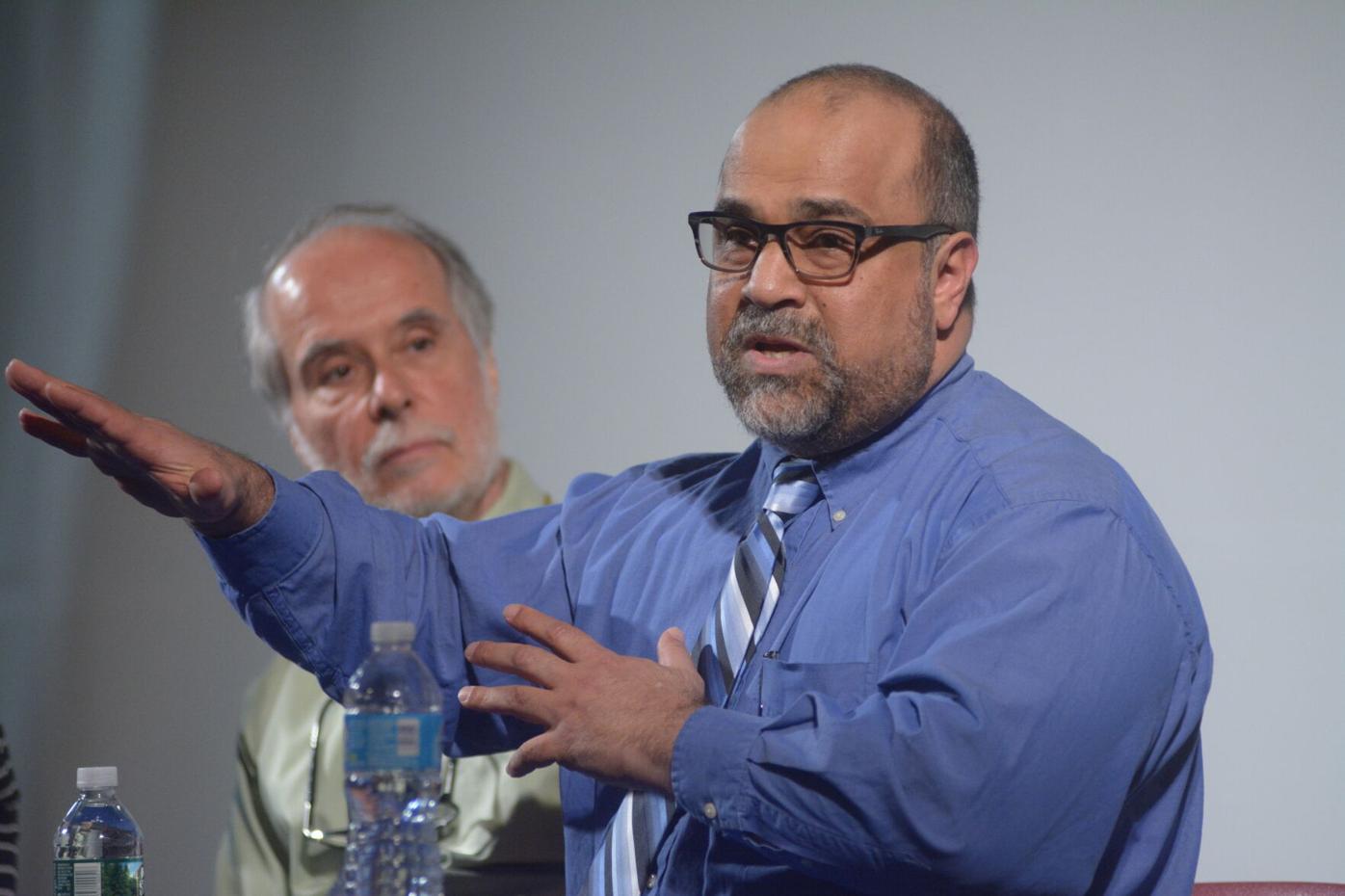 Rabeh Elleithy says he never experienced any discrimination after Sept. 11 in the Berkshires, where he lived with his family. He says that where he does experience it is when he travels and frequently is searched by security. Elleithy is shown in 2017, speaking on a panel about antisemitism and Islamophobia. 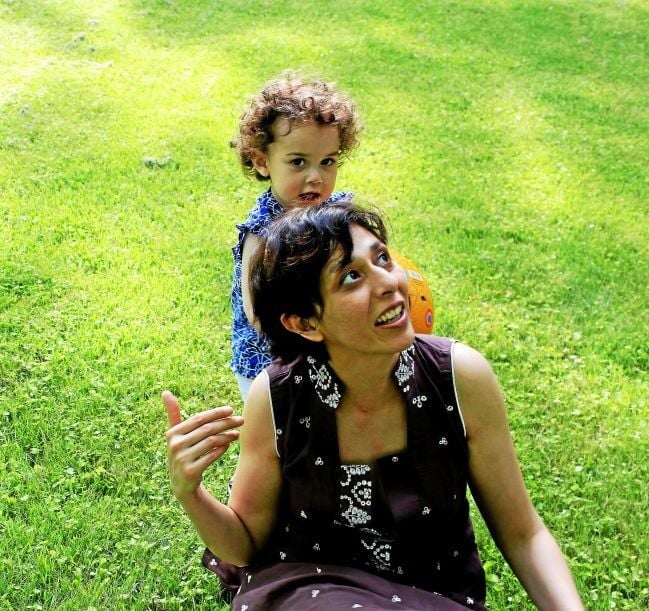 Professor Asma Abbas, shown with her daughter in 2015, teaches politics and philosophy at Bard College at Simon's Rock. Abbas, who came to the Berkshires in 2005 from her graduate program at Penn State University, was in the U.S. two years before 9/11. She says that for Muslim Americans to be marginalized after 9/11 is painful. 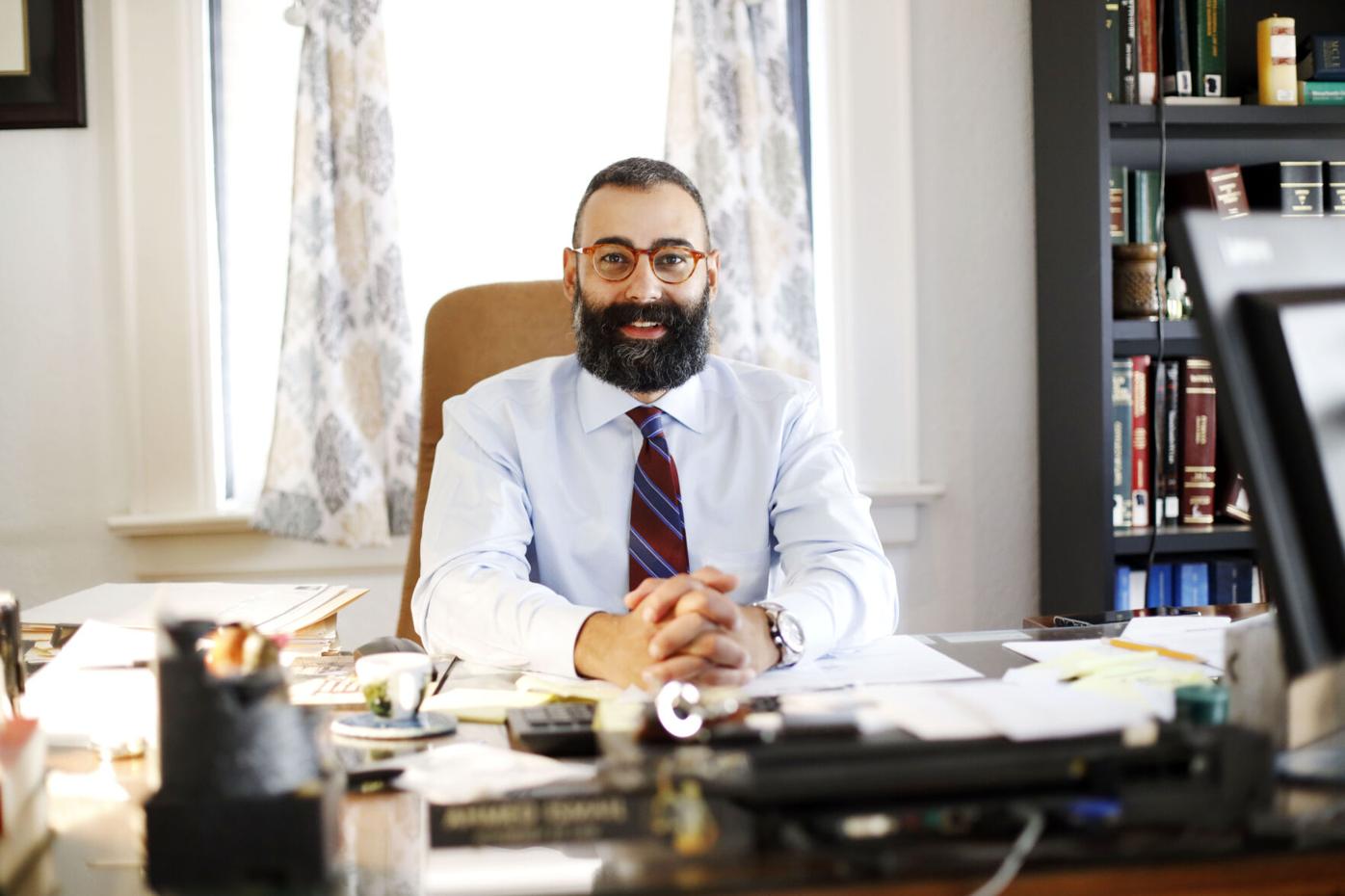 Attorney Ahmed Ismail in his office in Pittsfield. Ismail feels completely at home and welcome in the Berkshires, where he moved in 2012 and worked several jobs while he finished law school that he began in Egypt. He said he often is met by the opposite of racism, as others show interest in his life and career. 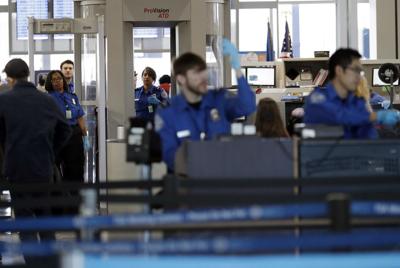 For Rabeh Elleithy, a frequent flyer, it continues to happen about eight out of 10 times. For Ahmed Ismail, it has been five times out of six trips.

“If I’m chosen more often than not, at random, it doesn’t become random, it becomes profiling."

This is how often the men, originally from Egypt, are plucked from airport security checkpoints and stopped for extra searches and questioning since 9/11.

Airports are the only places where the men have encountered the apparent racial profiling — or even everyday racism — of those from Arab countries. In the Berkshires, and in the five states where Elleithy has lived over three decades, he said he never has experienced it.

Ismail, a busy Pittsfield attorney raising a family, said he feels at home and welcome in the Berkshires, where he moved in 2012 and worked several jobs while he finished law school that he began in Egypt. He said he often is met by the opposite of racism, as others show interest in his life and career.

But, these airport stops since he arrived in the U.S. have involved deep, alarming searches, and detentions in what he calls “the brown room,” coined by an Egyptian comedian who refers to the skin color of those held in these security wards. It has gotten better for Ismail since he obtained an American passport.

In one incident at the Miami airport, his wife waited outside and was not allowed to have contact with him. Ismail, now 32, had only a green card at the time. While he was detained, he missed two flights to New York, a bus and train back to the Berkshires. He also was terrified.

“I literally waited five hours, and I’m sitting there, and I get a little upset, but you can’t get really upset because there’s this sign that says you can face an up to [a] $10,000 fine and criminal [charges] for arguing with the officers or just causing a disturbance.”

Sept. 11 changed the lives of everyone in the U.S. For Muslim Americans, the experience involved a special kind of grief and fear, a collective villainization crystalized. It was a kind of “guilt by association,” as Ismail put it, that became institutionalized as technology monitored their movements.

That the 9/11 terrorists were Muslim swept anyone from an Arab country or those America-born into a web of suspicion.

In the months after the attack, hate crimes against Muslims increased, according to FBI statistics.

The Department of Homeland Security was born, and under its umbrella, the Transportation Security Administration, began the automated screenings Ismail and Elleithy know are not random, but are legal under the Patriot Act signed into law after 9/11.

The delay in that Miami security room, Ismail later learned, was because officers were waiting for a call from the National Security Agency in Washington. “You feel helpless, you feel scared, and you don’t know what’s happening and you don’t know why,” Ismail said in his East Street law office, a stack of search and seizure casebooks on the floor nearby.

For Elleithy, an engineer who was living in Lenox during 9/11 and who now lives in Indiana, it’s a similar story. Life in the Berkshires passed without incident — glorious, in fact. Despite having PreCheck status with the TSA because he flies so often, he frequently is stopped and searched. He spoke to the TSA officers about this, who he says were polite and professional.

“If I’m chosen more often than not, at random, it doesn’t become random, it becomes profiling,” he said. “I’m an engineer, so, I know what random is.”

For Asma Abbas, who originally is from Pakistan, the extra airport searches happen enough to take note.

“I get stopped by TSA, not viciously, excessively, but enough,” Abbas said, noting that she was stopped more often while traveling in Europe.

Life on the ground

Elleithy, who was involved with the United American Muslim Association of the Berkshires while living in the region, never has heard slurs directed against him. His wife and children never experienced discrimination, either.

“Even now in the South, people are very polite,” he said.

He has read plenty about discrimination of other Muslims, and says he feels blessed. He also says he feels that the U.S. is more tolerant to Muslims than England, where he once lived. His friends who live in Europe also say America is more welcoming.

Abbas, a professor of politics and philosophy at Bard College at Simon’s Rock, likes to dive deeper into the origins of local problems like racial discrimination against American Muslims or anyone else. She prefers to place them in a context of American imperialism.

“It would matter a lot if we expanded our bandwidth,” she said, noting that the modern approach, often, is to encourage people to “be a victim, confess, tell us how you hurt.”

Abbas, 44, came to the Berkshires in 2005 from her graduate program at Penn State University. She was in the U.S. two years before 9/11. She noted the irony of people fleeing Manhattan for the Berkshires after the attacks — heading to the area where General Electric made ordnance.

She now lives in Richmond and says that what appears as tolerance and openness in places like the Berkshires sometimes also can be evidence of invisibility of those who are different in some way, or hail from abroad.

“It is a tolerance that is an erasure,” she said. “We will not be seen badly because we are not being seen.”

Abbas says that for Muslim Americans to be marginalized after 9/11 is painful, given cultural destruction due to the longtime European colonization in Asia and Africa, and 20th century U.S. imperialism and orientalism. The American presence, she added, sought to destroy countries in the Middle East, South Asia and North Africa — countries she says were on their way to making a path to the future.

“It has been 20 years of a lot of buried anger, shame, defiance, claims to history and truth that no one else seemed interested in — even those who were our friends,” she said, noting that their homelands became unrecognizable as they were used for battle. “Let us at least have our dignity.”

The horrors of 9/11 teed up anxiety about future violence in a world that sees people of Arab ancestry as potential terrorists, said one county resident who did not want to be identified, citing concerns people might think he holds certain political views only because of his heritage.

“9/11 is the worst day for people of Arab descent,” he said. “Every time there is an event, we’re like, ‘Oh, please don’t let it be a Muslim,’ because we know that we are going to be painted with a broad brush.

“It’s not like they did a Patriot Act after the Oklahoma City bombing,” he added, referring to the 1995 attack on the Alfred P. Murrah Federal Building by a white, American terrorist, Timothy McVeigh.

Ismail, the Pittsfield lawyer, wishes he could correct misinformation about how those in Muslim countries, or Muslim Americans, perceive the attacks, and how radically opposed from Islamic values the attacks were.

“These [terrorists also] did so much damage in Egypt and the Arab world,” he said.

Despite some harrowing moments at airports, Ismail said he now feels more at home in the U.S. than in Egypt. Like so many people who have come to America, he has fallen in love.

“Here, I feel like I’m being valued as a human and have a better life,” he said. “I get much more here than I ever got in Egypt. You get to love this country because you have all this. And my kids are here. It’s my home.”