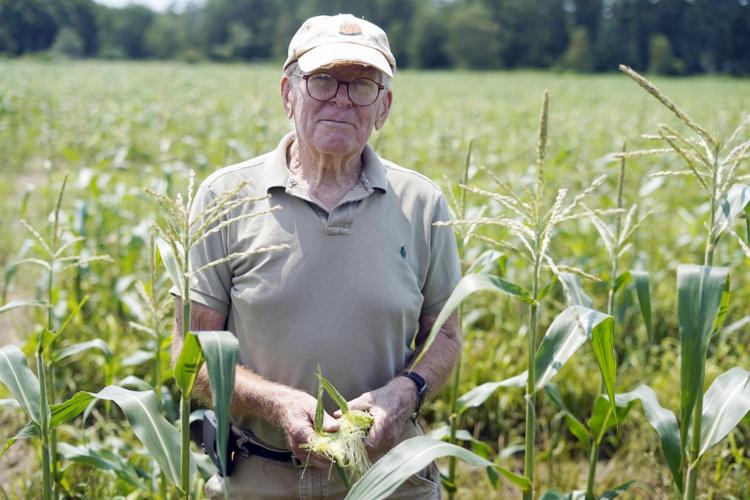 The corn at Bruce Howden’s farm in Ashley Falls is a couple of weeks from being ripe. Howden, a past president of the Berkshire County Farm Bureau, is having trouble getting his equipment in the field, because of mud, and is hoping things dry up before harvest. To date, up to 13 inches of rain has been measured in the Berkshires since June 30, blowing out the average July rainfall, which is 4.25 inches. 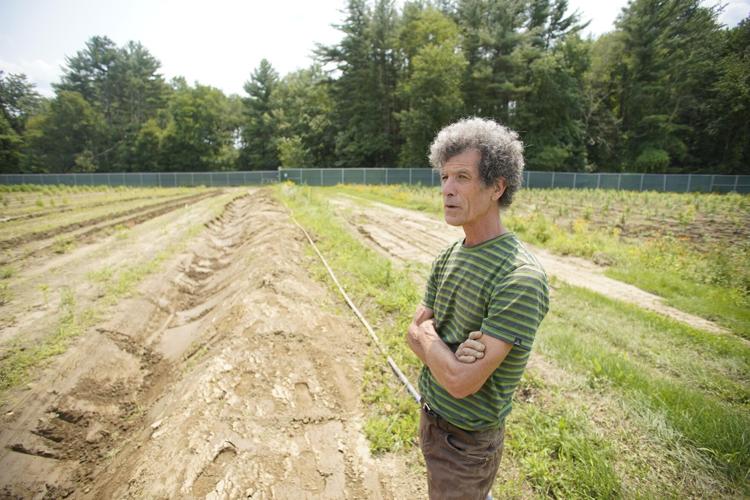 Ted Dobson, of Equinox Farm, has lost some cannabis to excessive rain and has carved some drainage into his growing area in hopes of salvaging more of his crop. Dobson said 300 to 500 of his plants out of 7,000 to 8,000 have, so far, been destroyed by rain. 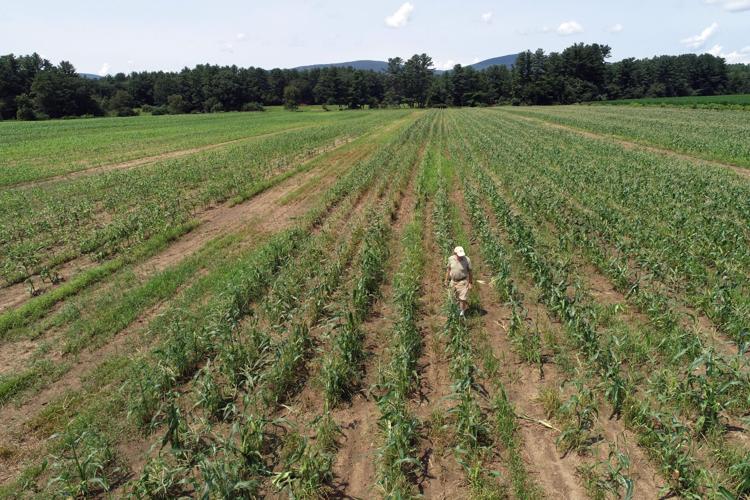 Bruce Howden stands amid his crop. Unofficial rainfall totals for the month so far in Pittsfield and surrounding central Berkshire County range from 11 to 13 inches, making July one of the rainiest months on record. Howden said he has never seen anything like this. “And I’m going to be 81 years old next month,” he said.(tncms-asset)b36da400-eb20-11eb-b92c-bb2b6abf9043[4](/tncms-asset) 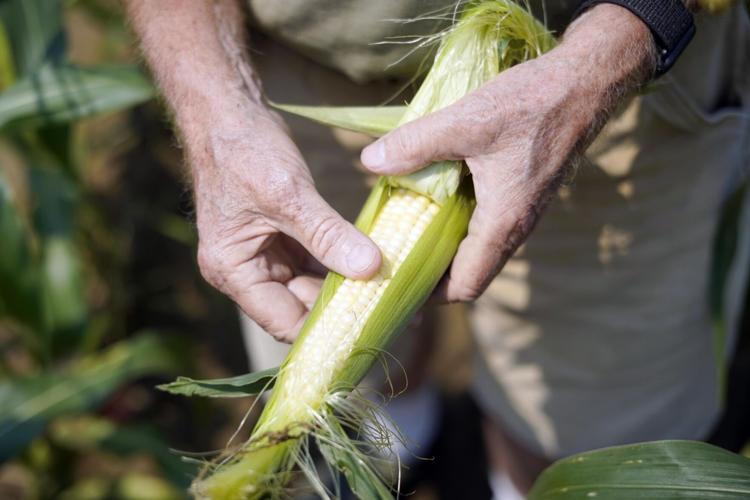 Like others, Howden never has seen anything like the precipitation for the month in Berkshire County. “And I’m going to be 81 years old next month,” he said. 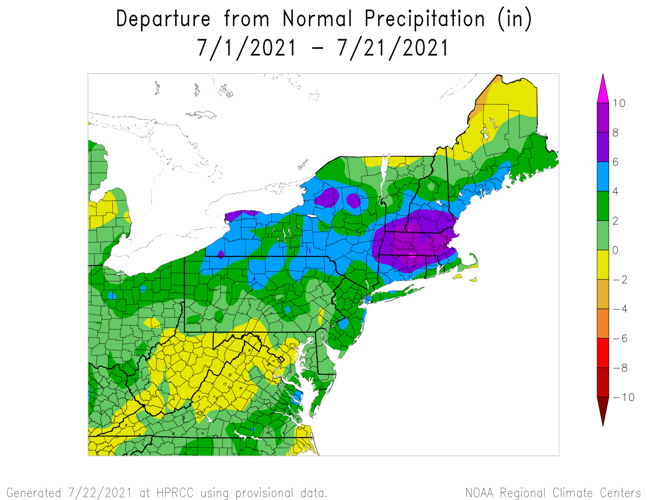 A chart created by Michael Rawlins of the University of Massachusetts-Amherst, using provisional National Oceanic and Atmospheric Administration data. 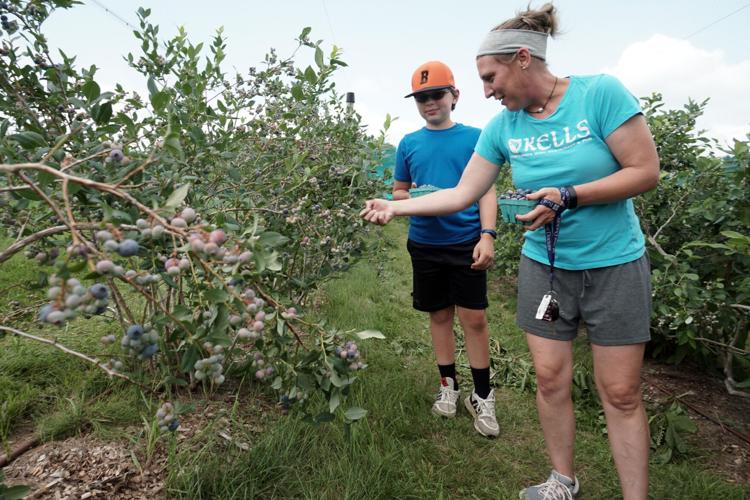 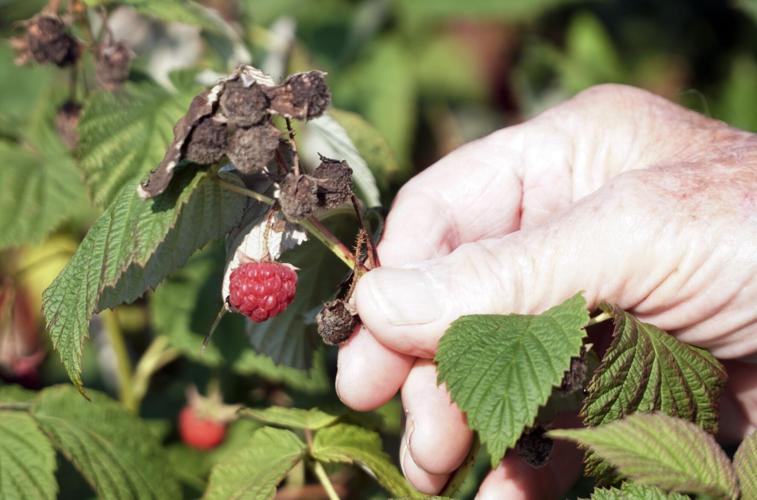 From top: David Jurczak, owner of Lakeview Orchard in Lanesborough, holds a bundle of raspberries that shows loss of berries due to rain; Elena Shereshevskaya picks blueberries at Windy Hill Farm in Great Barrington; Howden shucks an ear of corn. 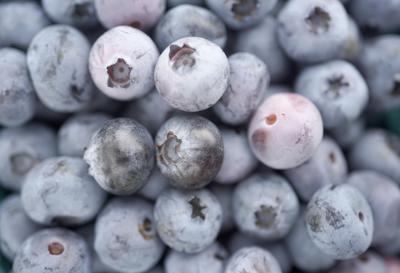 Ask farmers how they're faring in this season of historic rain, and here’s what you get:

“I have a snorkel, but I can put it aside and talk with you,” said Bruce Howden, of Ashley Falls.

“Look, I signed up to be a farmer a long time ago, but this is tough,” said Sheffield farmer Ted Dobson.

Up and down Berkshire County, fields are saturated. Farmers who should be spending these long summer days weeding, pruning, planting and harvesting instead are dealing with what Dobson calls an “emergency.” To date, up to 13 inches of rain has been measured in the Berkshires since June 30, blowing out the average July rainfall, which is 4.25 inches.

Unofficial rainfall totals for the month so far in Pittsfield and surrounding central Berkshire County range from 11 to 13 inches, making July one of the rainiest months on record. In North Adams, the National Weather Service's rain gauge at Harriman & West Airport has totaled 10.39 inches for the month so far.

More rain is predicted countywide this weekend and into next week, according to AccuWeather.com and the National Weather Service.

“People are afraid of coming out and it raining on them, or worse: thunderstorm,” said Judy Mareb, owner of Windy Hill Farm in Great Barrington. “The showers and the thunderstorms just keep the pick-your-own people away.”

Windy Hill Farm closes its fields when it's raining.

It’s too soon to put a price on damaged crops and lost revenue, farmers say.

Meteorologists place blame on a persistent wind flow from the Gulf of Mexico that's feeding moisture into the region.

“Be careful what you wish for,” Tawczynski said. At the beginning of the season, he and most farmers feared a season of drought.

“I’m 76, and I’ve seen three so-called 500-year floods,” Tawczynski said. “This is a whole other thing. This is an established weather pattern, and it doesn’t seem to be going away in a hurry. We’ve had big storms before, but for it to rain so constantly — and there’s more forecasted — that’s a problem.”

Fortunately, this year Tawczynski planted a large portion of his crops on his higher-elevation fields. Still, some of his tomato plants are showing signs of wilt, caused by saturated roots.

“I’m 76, and I’ve seen three so-called 500-year floods. This is a whole other thing. This is an established weather pattern, and it doesn’t seem to be going away in a hurry. We’ve had big storms before, but for it to rain so constantly — and there’s more forecasted — that’s a problem.”

He also expects losses of some of his sweet corn.

In terms of accessing his saturated fields, he said: “Some of the roadways in the farm are four-wheel-drive-only and pray.”

For Howden in Ashley Falls, good thing his 20 acres of sweet corn haven’t yet ripened. His fields, surrounded by a moat of thick mud, are inaccessible.

“And I’m going to be 81 years old next month,” said Howden, a past president of the Berkshire County Farm Bureau.

By hand and by machine, Dobson, who grows marijuana for Theory Wellness in Great Barrington, has spent the better portion of many days this month digging and re-digging canals to divert the high water from his fields off Bow Wow Road in Sheffield. Dobson said 300 to 500 of his plants out of 7,000 to 8,000 have, so far, been destroyed by the deluge.

Mareb, at Windy Hill Farm, said she hasn't lost any of her blueberry bushes. The problem is, they need sun to ripen.

“They certainly are plump because of all the rain. Really good-sized," she said. "Just not blue yet. If you give them some sun, they’ll be fine.”

Among her blueberry bushes is a variety that ripens in early summer. Those blueberries did well, she said. But, when it came time for picking in early July, the weather took a turn. The weekends have been rainy.

On any given sunny weekend day in summertime, Windy Hill typically welcomes 150 to 200 people to pick blueberries.

"It's been quiet," Mareb said. "It's been a financial hit, absolutely."

"We usually pick sweet cherries for three weeks," he said. "We only picked for three days this year."

The business is taking a financial hit.

"We lost thousands of dollars in pick-your-own," Jurczak said.

The farm has more than an acre of red raspberries, which also are vulnerable to mold. Blueberries, on the other hand, are booming.

But, a strong blueberry crop won't be able to make up for the losses from crops like sweet cherries.

"You can't make that up," Jurczak said.

"We're keeping our fingers crossed our apple crop will be OK — and our peach crop," he said. "Everything is looking good as far as they are concerned."

Still, Jurczak never has seen this much rain.

"I've never seen it this bad. People don't believe in climate change, but we do here," he said.

“July in most areas of Massachusetts is shaping up to be one of the wettest on record," said Michael Rawlins, associate director of the University of Massachusetts-Amherst's Climate System Research Center. "These heavy-precipitation events are consistent with a warmer climate."

Since the late 1800s, Western Massachusetts has seen a "modest increase" in summer precipitation — about 0.1 inches per decade — but there is no long-term trend specifically for July, according to Rawlins.

In the U.S., the Northeast has seen the largest increase in the heaviest-precipitation events, Rawlins said, but most of that increase is not in the summer months.

In general, Rawlins explained, "research has demonstrated a link between climate change and a large family of extreme recent weather events. Extreme precipitation is a hallmark of a warming climate. A warmer atmosphere holds more water vapor. The moisture can then be 'wrung out' when conditions are favorable."

Meg Bantle, co-owner of Full Well Farm in Adams, is seeing the impact of rain on her farm, but hasn't had any major crop loss.

“We have started to see some crop disease. There's a lot of diseases spread more readily when things are wet," Bantle said. "We haven't had any flooding, which feels fortunate. But, also in part due to our slope and due to our no-till practices. ... Part of the motivation when starting the farm and choosing to be no-till was to be more resilient to the weather patterns of climate change.

"No-till soils, with lots of structure and roots and soil life, are more able to absorb and hold water and prevent flooding and to be more ready to weather drought conditions.”

Flooding was not an issue for her, but cloudy skies were.

"Mostly what we're seeing is that things are behind because we haven’t had much sun," Bantle said.

Lack of sun also has been a challenge for Jennifer Barbeau, co-owner of Mountain Girl Farm in North Adams.

“That's what is doing us in. We need sun," she said. "We’re not seeing devastating losses from the rain. We’re seeing a slowness in ripening."

Mostly, she is dealing with a lot of mud on the farm, which has produce and livestock.

"Chickens don't function well in the mud," she said. “The ducks absolutely love it. Every day it rains, they are thrilled to pieces."

How much rain did Berkshire County get? These volunteers help meteorologists keep track by turning their backyards into weather stations

Berkshire County has more than a dozen volunteers who regularly measure precipitation for the Community Collaborative Rain, Hail and Snow Network. The project's tagline: "because every drop counts."