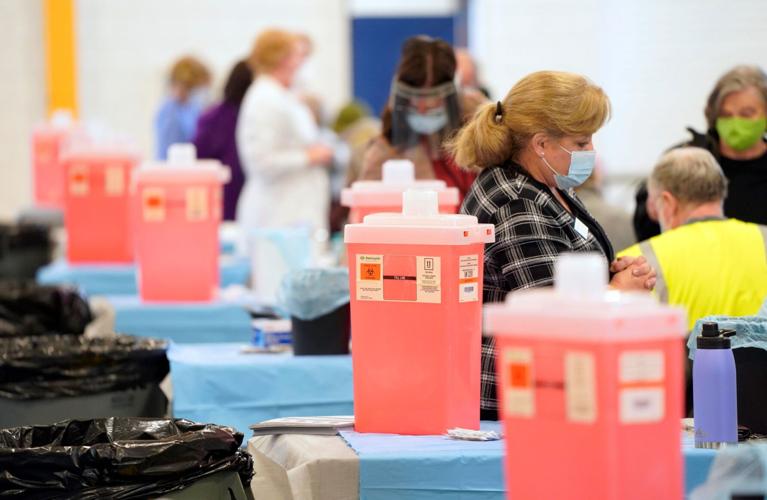 As Berkshire County COVID-19 vaccine clinics have stalled because of a lack of supply, state legislators are pushing for more doses to flow to regional collaboratives across the state. 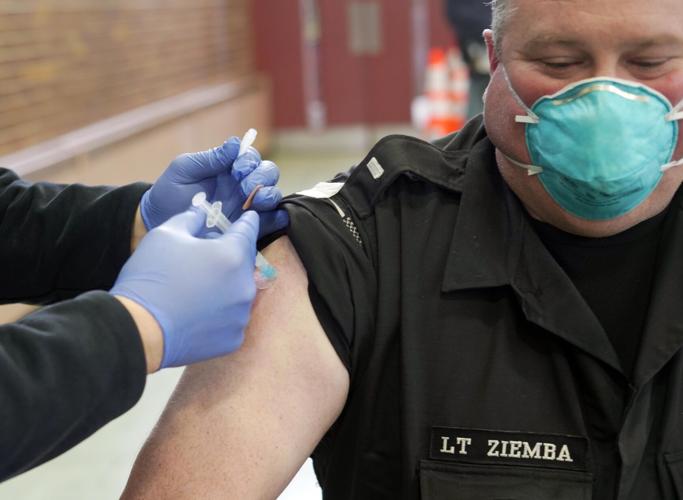 An EMT administers a COVID-19 vaccination for Williamstown Acting Police Chief Mike Ziemba at St. Elizabeth of Hungary Parish Center, North Adams, in early January. That site is one of three in Berkshire County that helped the region win recognition for its ability to administer vaccines in large numbers.

On a Thursday when Berkshire Community College would normally have been bustling with vaccinators, the gym sat empty.

“They're pouring all the vaccine into the mass vaccination sites.”

With only a handful of first doses to give out, Berkshire vaccine coordinators held just one clinic in Pittsfield this week. The site, which could administer more than 10,000 vaccines each week, has seen its inoculations slow to a trickle, as the commonwealth channels doses into mass vaccination sites concentrated in eastern Massachusetts.

Regional vaccine collaboratives in the Berkshires and around the state say the commonwealth is underutilizing them, despite their capacity to run high-output clinics, and leaving behind residents who live far from mass vaccination sites.

All Massachusetts residents ages 16 or older will become eligible for a COVID-19 vaccine by April 19, the Baker administration announced Wedne…

From Pittsfield to Northampton to Milton, local officials are calling on the state to redirect more first doses to regional collaboratives, some of which have seen shipments drop in recent weeks.

In the Berkshires, locally run clinics can administer doses at the same pace as some state sites, but the county’s regional collaborative leaders say they lack the first doses, financial support and special permissions granted to mass vaccination clinics run by private companies.

“They’re pouring all the vaccine into the mass vaccination sites,” said Leslie Drager, lead public health nurse with the Berkshire Public Health Alliance. “They’re pouring money into them. They’re giving them easy access to register. And we’re not seeing that.”

Berkshire County vaccine organizers tell The Eagle they get no consistency with their shipments and little advance warning about changes to the rollout. They are also locked out of programs offered at mass vaccination sites, such as the new pre-registration system, which they say will eventually come online for other sites — at an unknown date.

Most pressingly, first dose allocations have fallen in the Berkshires since the early weeks of Phase 2, according to local coordinators.

The same pattern appears to be playing out in other corners of the state, with cutoffs reported earlier this month by the Northampton regional collaborative.

Despite challenges, the Berkshire Vaccine Collaborative continues to run efficient clinics at all three sites, with guaranteed second doses from the state. But, the roadblocks facing regional collaboratives capture some of the challenges of the state’s rollout, as shifting delivery methods and priorities cause widespread confusion, frustration and even fear for residents awaiting their potentially life-saving shot.

“For them to go and open up state sites and then walk away from everything they were touting, it isn’t fair. ...  They were touting how great things were out in Berkshire County, the numbers we were doing, and now they’re taking a walk on us.”

On Thursday, state legislators who represent areas with regional collaboratives wrote to the state, asking leaders to prioritize supply for those collaboratives, which are typically cooperative efforts among medical providers and public health entities, like local boards of health.

“Weekly doses sent to regional collaboratives have varied widely, often resulting in delivery of significantly fewer vaccine doses to those settings — woefully underutilizing them in the statewide vaccination distribution effort,” they wrote.

The entire Berkshire state delegation signed on to the letter.

“For them to go and open up state sites and then walk away from everything they were touting, it isn’t fair,” said state Rep. John Barrett III, D-North Adams. “They were touting how great things were out in Berkshire County, the numbers we were doing, and now they’re taking a walk on us.”

State Sen. Adam Hinds, D-Pittsfield, pointed out that regional collaboratives play a critical role in counties where most residents live far from mass vaccination sites. The state has just one mass vaccination clinic west of Framingham, located in Springfield.

“With local boards of health and regional coordination, we created a meaningful process here, and then the state pulled away from that,” Hinds said. “It feels like we’re becoming further disconnected from statewide strategy.”

Meanwhile, state Rep. William Driscoll pushed the Commonwealth to channel more doses to regional collaboratives so that they can ramp up capacity for an expected spring surge in vaccine supplies. “The capabilities of the regional collaborative (RC) sites ... are understood & it’s known that they have untapped capacity to administer vax,” the Milton Democrat wrote on Twitter.

In his tweet, Driscoll also argued for “pressure testing” – increasing allocations to ensure regional collaboratives can handle a high volume of appointments.In Berkshire County, organizers say each of the county’s three public clinics can each administer at least 2,000 doses a day, levels that rival mass vaccination sites. The Fenway Park site has been handling 1,500 daily inoculations, according to NBC Boston, fewer than a busy day at Berkshire Community College.

Local vaccine officials say their efficiency is a testament to the success of the regional collaborative model, which took root in January, when the county pitched it to the state.

As Berkshire Health Systems wrote to the Department of Public Health in a Jan. 11 email asking for permission to move ahead, the goal was to have most of the county’s vaccines shipped directly to the hospital system. Then BHS, Community Health Programs, local boards of health and other providers would work together on clinics.

Even as state representatives were pushing the Baker administration to allow the change, the county had effectively put it into place. Major public clinics in the county began Jan. 11.

In the weeks after the program began, the Berkshires received a shower of Pfizer vaccines, as one of the few providers in the region that could handle the ultracold storage requirement, organizers told The Eagle. Drager said the state once sent a shipment of Moderna and within an hour pulled the vaccines back, redirected them to a mass vaccination site and replaced them with Pfizer doses.

By late February, Baker had praised the Berkshire model effusively at press conferences, and regional collaboratives had formed from Northampton to Barnstable.

“They are playing an important role to fill geographic gaps,” said Lt. Gov. Karyn Polito at the time. “This approach is designed to ensure vaccines are distributed throughout the Commonwealth in a highly efficient and accessible way.”

As the rollout has progressed, however, the state has sent fewer first doses to the Berkshire collaborative. While a large volume of doses in early February allowed the county to speed forward with vaccinations, coordinators told The Eagle that a dearth of new shipments in recent weeks means the county has fallen behind in delivering doses to people aged 65 to 74.

The Berkshire Vaccine Collaborative says it has vaccinated just about half of that age group, compared to 80 percent of those 75 and older. Across the state, 60 percent of 65- to 74-year-olds have gotten at least one dose.

“They gave it to us when they had no place else to funnel it,” Drager said. “Once they had other places, that kind of slowed us down.”

Meanwhile, the financial and logistical distinctions between locally run collaboratives and state-run sites have caused impediments that have frustrated local coordinators and confused county residents

When the state launched a preregistration form after weeks of public demand, Massachusetts residents celebrated. For those far from mass vaccination sites, however, nothing changed.

According to Laura Kittross, director of the Berkshire County Boards of Health Association, the software used by regional collaboratives — PrepMod — cannot interface with the preregistration system used at mass vaccination sites. Berkshire coordinators say the state told them they will get access to the system but has not given a timeline.

This is not the first time the state has made policy changes at mass vaccination sites and left residents far from those sites in the dark about whether they could access the same benefits.

When the state rolled out its “buddy system,” officials encouraged locally run clinics to offer the doses if they could, said Heather Barbieri, director of emergency management at Fairview Hospital in Great Barrington.

Despite that encouragement, staff on the state’s 211 information line were telling residents that there were no caregiver vaccinations in Berkshire County — even as those exact inoculations were underway.

Meanwhile, the commonwealth did not set aside extra doses for local clinics to accommodate the policy. Just days after the buddy system went into effect, Massachusetts doubled the number of eligible people, leading to a rush on appointments.

“The caregiver doses were a huge issue,” Barbieri said. “We didn’t have that extra vaccine. If we had a clinic for 500 people, we already had 500 appointments, and we didn’t have vaccine for the 200 people who showed up as caregivers.”

Local vaccine coordinators were surprised by news reports that the state was paying CIC Health, a private company, more than $1.1 million a week to run the mass vaccination clinics at Fenway Park and Gillette Stadium.

“A lot of people and organizations in the Berkshires said, ‘We have to get our population vaccinated, and we’ll worry about getting reimbursed later,’” said Laura Kittross, director of the Berkshire County Boards of Health Association. “So it’s been a bit of a blow to realize that there’s this whole alternate system.”

Kittross wonders if other local public health boards and medical providers, people familiar with their communities, might have been able to step into the void at far less cost than CIC Health’s operations.

In the Berkshires, local providers have yet to see any money from the effort. When they do get paid, at a tune of some $40 per shot, the company that processes insurance claims will take a 10 percent cut, vaccine leaders told The Eagle.

When the state first announced the change, Barbieri was on her way out the door to run that day’s clinic in Great Barrington. “I didn’t have time to read the whole announcement,” she said. “And everyone who came to the clinic had read it.”

Her predicament channels another complication voiced by many local vaccine coordinators: When Baker announces a significant change to the rollout, clinic organizers sometimes have just 15 to 30 minutes of advance notice.

But an even bigger issue, clinic organizers say, is the lack of predictability around dose allotments. Even with limited federal supply, a more reliable allotment would allow coordinators to plan more than a few days in advance.

“We can’t plan without knowing how much vaccine we’re gonna have,” Kittross said. “Mass vaccination sites ... can plan a few weeks in advance, which has repercussions for sites, for police details. For us, it’s hard for our volunteers not to know until two days in advance that we’re going to run a clinic.”

Despite the myriad challenges, Berkshire County vaccine coordinators are quick to point out that the county’s has had great success, with high rates of people vaccinated – though no longer the highest in the state — and satisfied recipients.

If anything, they say, the Berkshire model should continue to be a template for the state. Regional collaboratives, organizers point out, can get the vaccinations done efficiently, but they can also reach the most at-risk communities, including with low-income senior housing clinics and homebound vaccinations in the Berkshires.