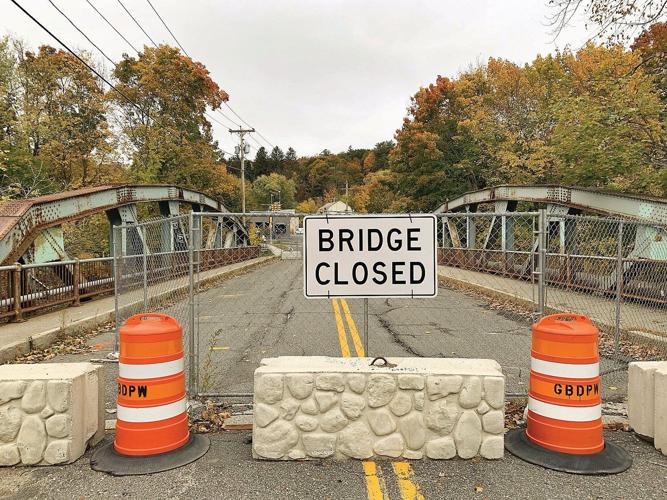 The Cottage Street bridge just east of Main Street in Great Barrington was closed for safety reasons. Gov. Charlie Baker announced Thursday that bridges like this one across the county and state will receive money for repair and replacement through a boost of federal and state funding. 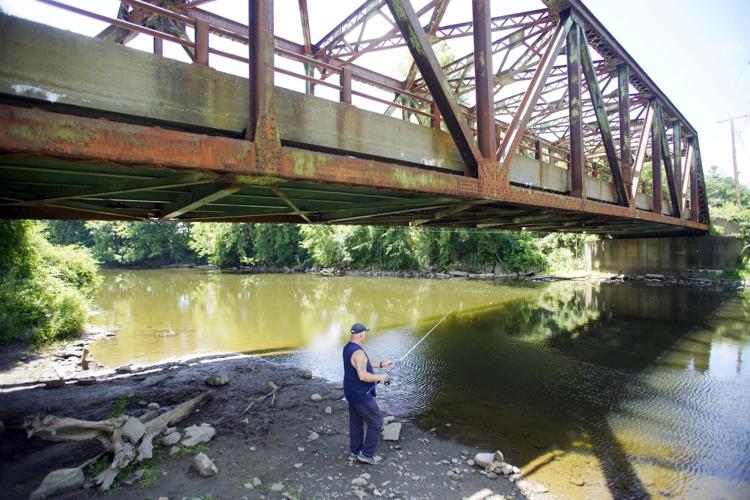 Don VanTassel fishes for smallmouth bass under the Division Street Bridge last summer. Great Barrington plans to install a modular temporary bridge until the state can overhaul the existing bridge, shut in 2019 after an inspection revealed that it was too dangerous for traffic.

The Rourke Bridge over the Merrimack River in Lowell was intended as a temporary span when it was installed almost 40 years ago.

U.S. Rep. Lori Trahan remembers driving cautiously over it in her dad’s pickup truck when she first got her license, and said that, as an adult training for road races, she would “sprint across the bridge because I looked up at the chain link-covered pedestrian lane and it just instantly felt like a death trap.”

The two-lane bridge is crucial to major regional employers like the University of Massachusetts and Lowell General Hospital, UMass President Marty Meehan said, but crossing it is tough for ambulances headed to the emergency room.

The Rourke Bridge, Gov. Charlie Baker said Thursday, “is in some ways the perfect project and the perfect place to kick off what we expect and anticipate will be an enormous amount of activity over the next 10 or 12 months.”

At a UMass-Lowell building not far from the bridge in question, Baker said a $170 million project to replace the existing temporary link with an expanded and permanent bridge is one piece of a plan to invest $3 billion in bridges across Massachusetts over the next five years.

These include a slew of bridges across the Berkshires, including three in Great Barrington that long are overdue for a rehab — and two whose shutdowns in this South County hub over the past few years have upended travel and even harmed businesses. The Cottage Street bridge will receive about $3.85 million; the Division Street bridge, $13.96 million. And the bright red bridge — it formerly was known as the “Brown Bridge,” at the gateway at Routes 7 and 23 — will get $10.1 million for an overhaul.

Two bridges in Pittsfield will be replaced and one repaired, as well as others in towns across the county. In North Adams, the bridge that spans the Hoosic River on Route 2 will be replaced with about $17.8 million, the most for any Berkshire County bridge.

The costly, steady ruin of bridges in Berkshire County

The Baker administration published an initial list of 146 bridge-repair projects, involving 181 individual structures, eyed for that $3 billion program, which will use a combination of money from the infrastructure law President Joe Biden signed in November and $1.25 billion from a next-generation bridge program in last year’s transportation bonding bill.

The bridges of Berkshire County to receive funding

The largest expenditures are for bridges in Lowell, Haverhill, New Bedford, Marion, Springfield and Chicopee.

Counting new and reauthorized money, Baker said Massachusetts expects to receive about $9.5 billion through the federal law over the next five years — a time period that will extend far beyond Baker’s final term and deep into his successor’s administration.

“For those of us in the infrastructure business, today is like Christmas,” highway Administrator Jonathan Gulliver said. “We’ve been waiting for this for a very long time, and whether it’s a bridge replacement, a clean water project or a brownfield remediation, this law will touch every corner of the commonwealth over the next five years.”

The Construction Industries of Massachusetts said Wednesday that it had sent a letter to Senate President Karen Spilka and House Speaker Ronald Mariano, calling for the state to prioritize bridge repairs.

“An aggressive bridge program — like the Accelerated Bridge Program several years ago — must be prioritized,” he wrote. “Every community across the Commonwealth has bridges in need of repair and/or reconstruction. Addressing a handful of bridges across the state in piecemeal fashion will not get us out of the federal penalty nor will it ensure the safety of the public. Our bridges must be a priority.”

Thursday’s event in Lowell was punctuated by expressions of gratitude for city, state and federal officials for their efforts on the Rourke Bridge, including plaudits for Trahan, a Westford Democrat who called her vote in favor of the infrastructure package “the easiest vote” she has cast since she was elected in 2018.

Trahan, who ran unopposed in 2020, has a challenger this cycle in Fitchburg Republican Dean Tran, a former state senator. Tran, who launched his campaign with a Wednesday evening event, said he is “running to give the voters an alternative to the status quo, to big government and the broken promises and fiscal policies of the Washington Democrats.”

Drawing laughs and applause, Baker described Trahan as “let’s just say, aggressive, and not just on this process, but on many other issues that involve her congressional district as well.”

Lt. Gov. Karyn Polito, who, like Baker is a Republican, said Trahan is “obviously a very effective voice in Washington.”

“What I love about Congresswoman Trahan is, she’s grounded in her community, and she’s effective in Washington because she understands what the priorities and needs are for the people here at home,” Polito said.