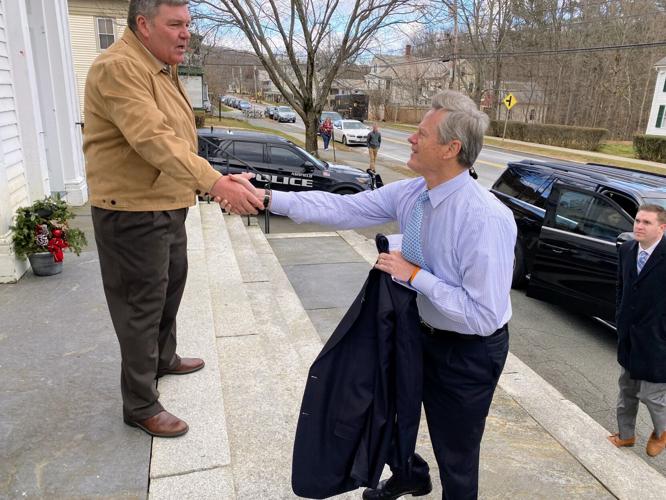 Gov. Charlie Baker shakes hands Thursday with Tom Carter, a member of the Ashfield Select Board, on the steps of Town Hall in Ashfield on Thursday. 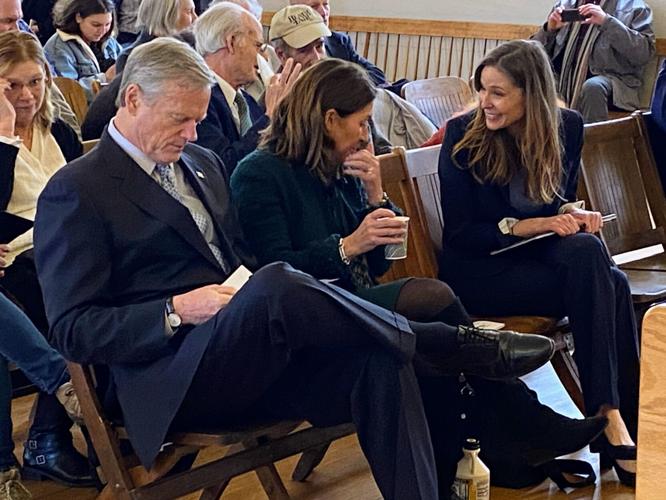 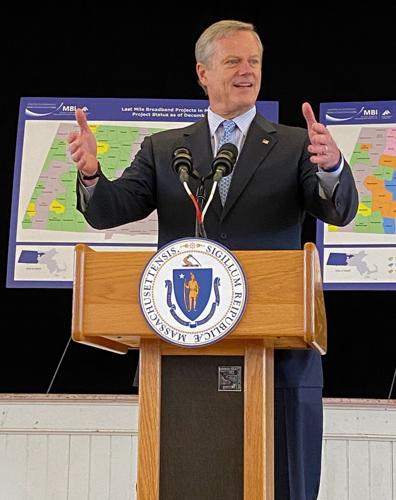 Gov. Charlie Baker praised people in the crowded Ashfield Town Hall who took part in the Last Mile program. “This was a total team effort. We're incredibly grateful for all the work that so many people in Western Mass. bring to this. And incredibly proud of the team and the work that they did to make this happen." 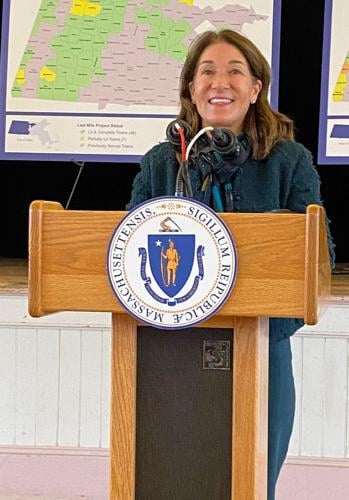 Lt. Gov. Karyn Polito recalled the frustration she and state officials encountered over the lack of broadband. “There were a lot of crossed arms and long faces for the right reasons,” she said. 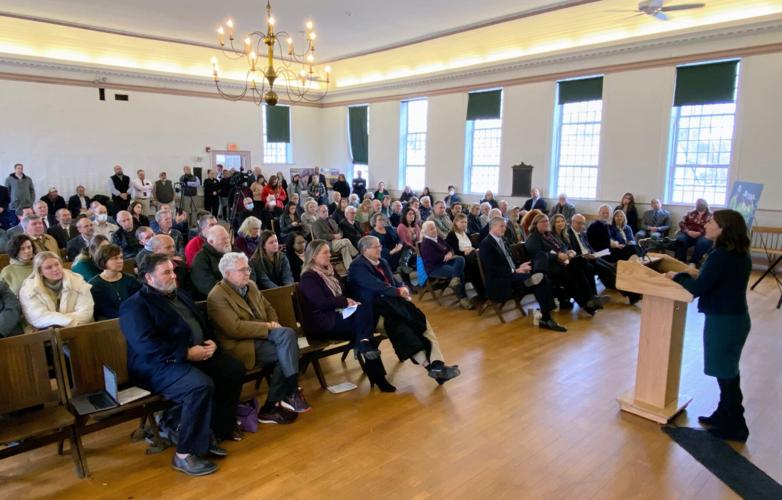 Scores of officials from across western Massachusetts gathered to mark the substantial completion of the Last Mile program led by the Massachusetts Broadband Institute. 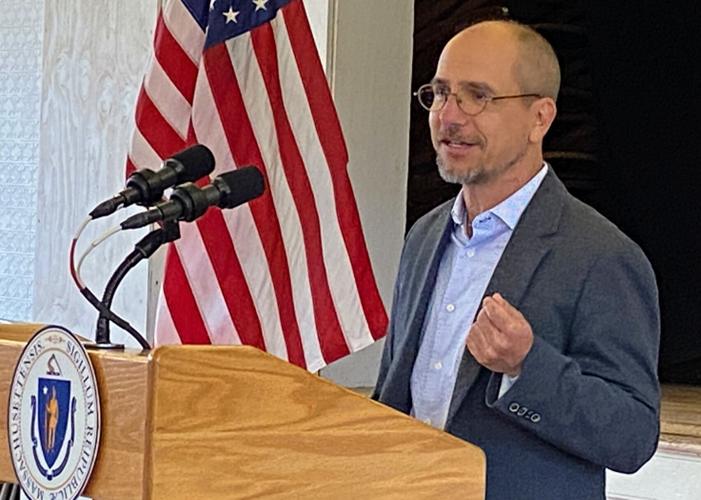 David Kulp, who runs Ashfield's broadband fiber network, speaks of the reasons he led that project. 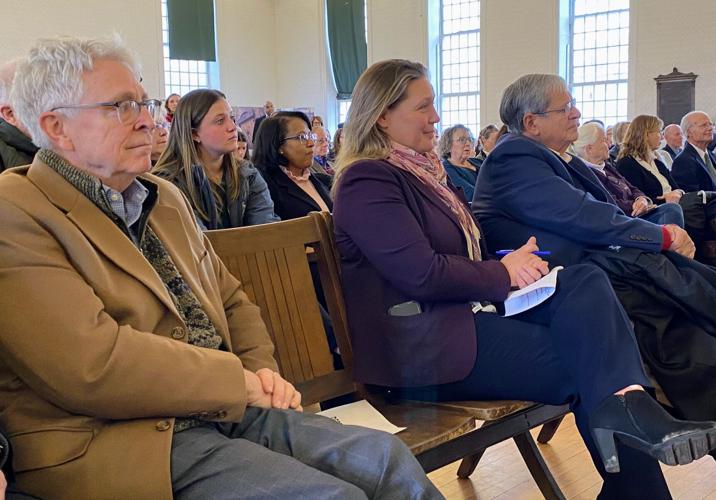 The job isn’t done, officials concede. Of the 53 Massachusetts towns deemed to be on the dark side of the digital divide a few years before the pandemic, seven have not secured full access to high-speed internet service, including Egremont, Florida, Monterey and Savoy.

But 46 towns have gained it through the Last Mile program — 15 of them in Berkshire County.

With weeks left in their administration, Gov. Charlie Baker and Lt. Gov. Karyn Polito arrived late Thursday morning in a western Massachusetts town to mark the progress made.

“It was a long time coming,” Doug McNally, the retired educator who led development of Windsor’s town-owned fiber network, said in an interview at the gathering. “A lot of us were at it for a lot of years. It would not have happened without this administration. Politics aside.”

McNally remembered Polito’s visit to his town, when he filled her in on how severely the lack of broadband hobbled his community.

Joined by scores of people involved in all aspects of the quest to expand broadband access, they climbed the stairs into Ashfield’s Upper Town Hall. Together, they recalled times of frustration. Of negotiation.

And, eventually, of breakthrough.

Leaders of local municipal broadband projects, including David Kulp, the Ashfield resident who led Ashfield’s fiber broadband campaign, thanked Baker and Polito for allowing individual towns to choose their own ways of closing the digital divide, after years of relative inaction on the state level following the completion of the “middle mile” network.

Kent Lew, a Select Board member in Washington who managed his town’s fiber broadband project, recalled in an interview that the state’s 2017 decision to let towns choose their own paths — toward publicly owned networks, or as customers of commercial ventures — accelerated progress.

“It was clearly a turning point,” Lew said. “I don’t think that can be overstated.”

Frustration mounted across the region. “It went from chagrin to success,” Peter Larkin, the former Pittsfield state representative who now chairs the Massachusetts Broadband Institute board, said in an interview. “It went from frustration to solution. And, now, how do you build beyond that?”

With federal infrastructure investments flowing in, a new administration will oversee what’s shaping up as an entirely new drive to provide broadband access.

This time, the last mile isn’t geographic. Officials at the event announced a Digital Equity Partnership Program that will endeavor to bring high-speed service to people who live in places where broadband is available, but isn’t fully used.

The effort will offer training in digital literacy and provide new or refurbished internet-accessible devices.

Separately, Kennealy said a new Digital Equity Planning Program will work with cities and towns to help them understand how gaps in internet access affect their communities. In addition, that new program will coach municipalities on how to tap into available state and federal funding. “These are important parts of the next iteration of the strategy, which is about $350 million in state and federal funding,” Kennealy said. “It’s a day to celebrate this incredible effort around the last-mile strategy and announce that go-forward strategy. As always, the work continues and the work continues in partnership.”

The Berkshire Regional Planning Commission is one of those partners. Wylie Goodman, a commission senior planner, said she is working to reach out to every community in Berkshire County to explain steps they can take to help residents who remain on the sidelines, digitally speaking.

They include people who are disabled, not native speakers of English, seniors on fixed incomes and veterans. They may face economic barriers to internet use, or a simple lack of familiarity. “We really need to get out on the table – what are the barriers?” she said.

Carolyn Kirk, executive director of the MassTech Collaborative, said the broadband institute her group oversees is working to help people who don’t have devices to connect, who may lack skills, and who cannot afford service. “Even though they have access to the internet, they choose not to, for whatever reason,” Kirk said.

During the pandemic, in an example of a program that is poised to be replicated, the state worked with the MassHire system to identify job-seekers who didn’t have access to the internet. The Massachusetts Internet Connect program provided 7,000 Chromebooks to help those people.

People who need help affording access to the internet through a service provider will be referred to a federal program that provides subsidies. Those subsidies are underused, Kirk said, with only a quarter of those eligible nationally taking advantage. “We need that number going up,” she said.

Michael Baldino, an MBI director and general counsel, said people in communities across the state remain walled off from web access, in some cases because parents only go online by using their children’s school-issued laptops. “You need to have enough devices to meet the needs of the household,” he said in an interview.

One element of the Digital Equity Partnership Program will work to get devices into households to address that problem. “This enables them to take advantage of the connectivity that exists,” he said. “We’re building maximum flexibility. We’ll meet them where they are.”

That may be because it’s too expensive, or because people don’t have computers, or lack technical skills.

With that shift, the “last mile” campaign extends to people who may live anywhere in Massachusetts — to 351 cities and towns, not just the 53 that have been the focus for Baker and Polito’s entire second term, and part of their first.

The pivot comes as a massive influx of federal funding approaches — roughly $350 million, Baker said. That compares to the $57 million invested by the state in the last-mile program, which saw 40,000 new utility poles pounded into the ground, 2,000 miles of fiber laid and 26,000 homes and small businesses getting access — for the first time — to high-speed internet.

Baker said it became clear to him the lack of broadband preempted other conversations in this region. “It was one person after another talking to me about the agony that came with high speed in their communities,” he told the Town Hall audience.

Even so, he said his administration had a hard time, at first, understanding what was needed — or wanted, in terms of state support or incentives.

“It turned out that what they didn’t want was the single solution,” Baker said, meaning a “one size fits all” approach.

As unserved towns across western Massachusetts found out, Baker and Polito were willing to adjust the state’s remedy, enabling some to invest in municipally owned networks, and for others to team up with legacy telecom companies that received state subsidies.

“There’s a big difference between ‘I don’t want it’ and ‘I don’t want that one,’” Baker said. “And once we put together the menus, people got very interested in it. And then our colleagues in the Legislature came through with some very serious resources to make this happen.”

Baker praised people in the crowded hall who took part. “This was a total team effort. We’re incredibly grateful for all the work that so many people in Western Mass. brought to this. And incredibly proud of the team and the work that they did to make this happen.”

“Because [broadband] is like running water or electricity. And I really do hope that it serves as a benchmark for Western Mass. going forward, with respect to how you live and how you operate in your communities,” Baker said.

Turning the microphone to Polito, Baker called her the campaign’s most valuable player.

“It’s really a bookend moment for our administration, as we come here,” Polito said. “I’m not surprised to see a full house, because this is obviously a really important issue to all of you, and for all of us.”

She, too, saluted the many dozens of small-town officials in the audience — and recalled how her early trips across the region drove home the depth of the problem.

“There were a lot of crossed arms and long faces for the right reasons,” she said. “Thank you for the incredible honor to have been part of the team of people to help solve this problem — for our commonwealth and for this part of our state.”

“Thanks to you, there was a growing understanding that communities in the Commonwealth were being left behind when it came to economic development, housing values, education, health care, public safety,” Blais said. “I want to offer a very sincere thanks to the Baker-Polito administration. What you’ve done was really incredible, and I want to thank you for providing us with the opportunity to be here together today, to celebrate how far we’ve come. That is a result of our collective efforts.”

Blais then introduced Kulp. “We are here today because of people like David Kulp, who were relentless in their efforts to bring broadband to every corner of the Commonwealth.”

Kulp told a personal story of what motivated his activism: his wish to raise his two young children in Ashfield, after his wife Laura’s death from breast cancer, following a diagnosis at age 36.

Without high-speed internet, he struggled to find work in tech. Today, with broadband access from his home, he is able to work as a vice president with a California-based pharmaceutical company. That company is developing a drug to treat metastatic breast cancer that will undergo a Phase 3 clinical trial next year.

“About 15 years ago, I started working with other community members in Western Mass. to try to improve our internet,” Kulp said. “I won’t bore you with the history. This is supposed to be a short story — and getting here had so many twists. I often joked with my kids that they would probably have moved out before we got broadband. … But almost miraculously, just as COVID hit, Ashfield started lighting up homes.” 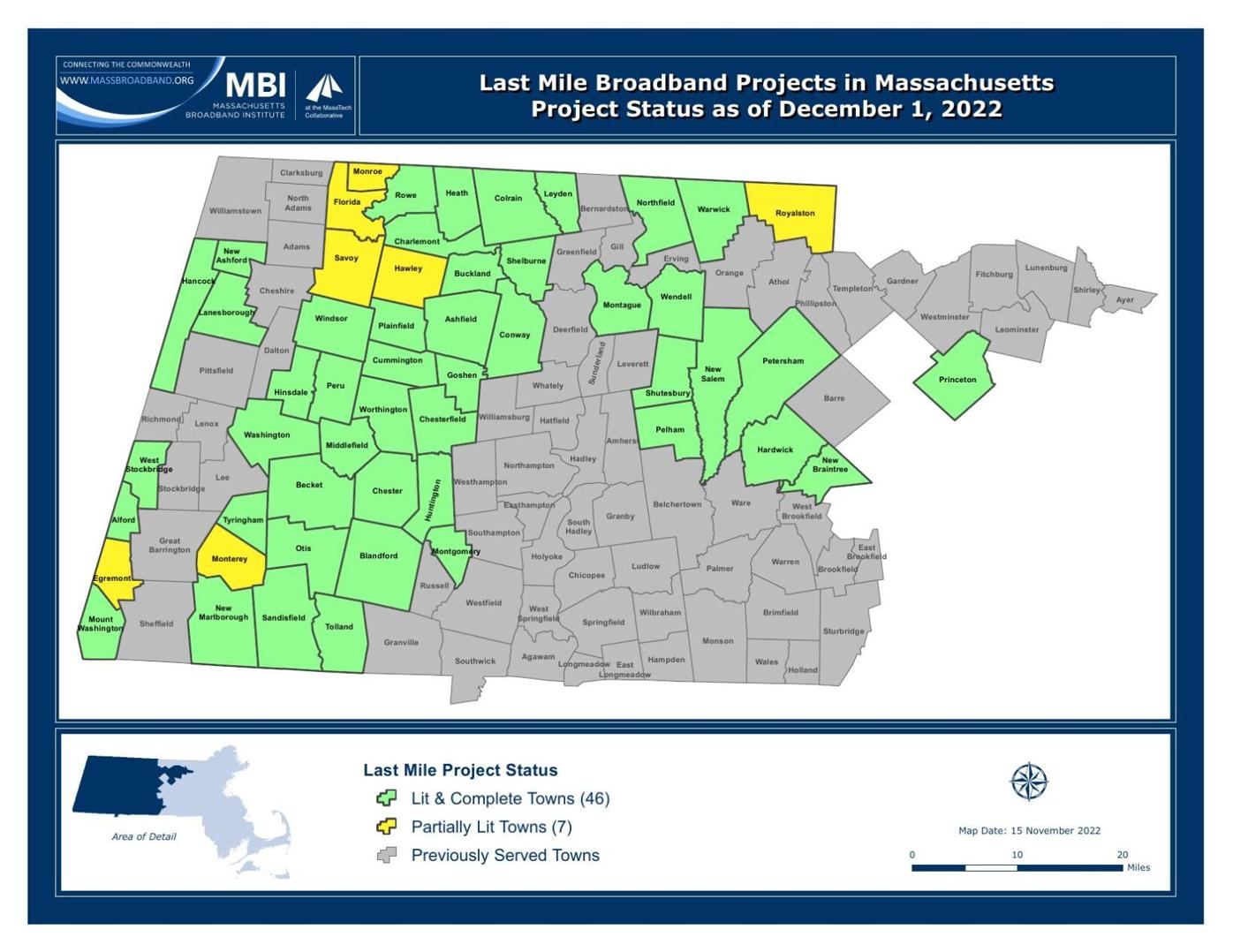 As broadband access advocates eye the last of the “Last Mile,” it’s worth noting the progress of this years-long initiative. Gov. Charlie Bake…

Your town may have high-speed internet. But does everyone in your community have access?

With nearly all “last mile” connections complete, Gov. Charlie Baker’s administration has shifted, in its final months, to efforts to help Massachusetts households overcome other obstacles to access.

In farewell remarks livestreamed from his office Tuesday afternoon, Gov. Charlie Baker stressed themes of working together and rising above party politics — especially considering "myriad of political fights and distractions that were raging all around us" during his eight years as governor.