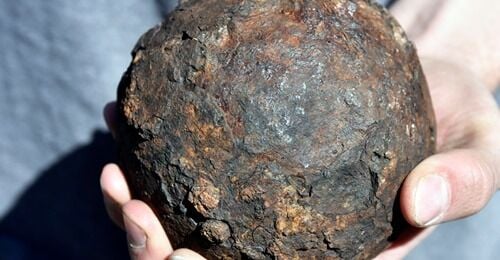 Zackary Cernak holds the iron ball he found in woods in Russell, while creating a dirt bike trail. Historians are helping the Cernak family try to establish the ball’s likely history and significance. 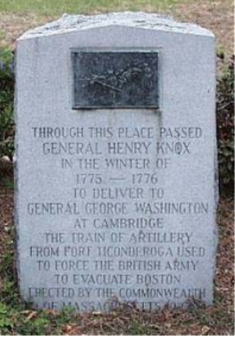 This is the design of monuments marking the route taken in 1775-1776 by Gen. Henry Knox and his troops. 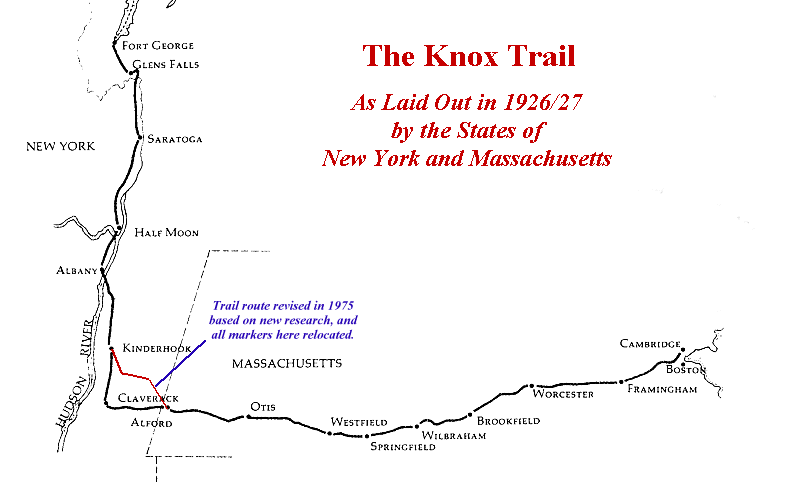 This map shows the route of the Knox Trail through New York state south of Fort Ticonderoga, and in Massachusetts.

You can leave an 8.4-pound iron cannonball out in New England weather for two centuries, it turns out. It still will be round, though a little cracked. How it got to a Russell hillside, though, remains fuzzy.

Zackary Cernak came across just such a thing late last month, in woods in Russell while creating a dirt bike trail about a mile from the route of the famous General Henry Knox Trail. Today, that path is all but forgotten. A few historical markers, including one in Russell, offer a reminder: “Through this place passed Gen. Henry Knox in the winter of 1775-1776 to deliver to Gen. George Washington the train of artillery from Fort Ticonderoga used to force the British Army to evacuate Boston.”

In the area that yielded up the cannonball, Cernak, a high school senior in Westfield, also found evidence of old fire pits. If the ball was left behind by Knox’s troops, one of the yet unproved theories, it would be at least 245 years old.

The family reported the find to a local historian, is reading up on Knox Trail history and is waiting for wider confirmation. But, Jessica Cernak, the teen’s mother, believes the area could have been an encampment used by an early military force of some kind.

“This is without a doubt, a very notable moment in time for not only my son, but myself, family, and local historians,” she said in a post on Facebook. She did not make herself available for an interview with The Eagle but told MassLive that the family’s historical exploration continues.

Kinney’s account of the find notes that historians are cautious about its significance, pending further study. One called the discovery “intriguing” but noted that iron balls also were used in manufacturing.

People interested in the route taken by Gen. Henry Knox, as he and his troops brought captured weapons to Boston in the winter of 1775-1776, can visit an interactive Google map at tinyurl.com/eymauws3.

Thomas Ragusa, a local historian who lives in Otis, told MassLive that he is dubious about the connection to the Knox Trail because that route is relatively far from where Cernak found the iron ball. Ragusa, a past president of the Otis Historical Commission and current alternate member, has worked to mark the trail’s passage through his town.

Ragusa supports the idea that the ball could be even older than the winter Knox made his way through Western Massachusetts. It could have been left decades earlier by troops traveling with a British military leader, Lord Jeffery Amherst, during what is known as the French and Indian War of 1754-63.

With further study, the family hopes to pin down what might have taken place on that piece of land, a long, long time ago.

In her Facebook post, Jessica Cernak cautions people against visiting the site, which is on private property.

This map shows the route of the Knox Trail through New York state south of Fort Ticonderoga, and in Massachusetts.