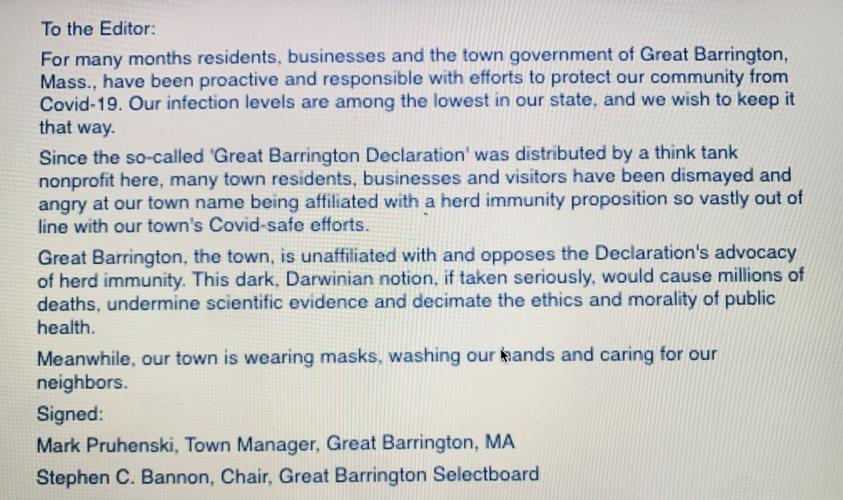 A letter to the editor the town has submitted to The New York Times.

GREAT BARRINGTON — Town officials remain irked over a controversial public health strategy in a document that is circling the globe — and dragging the town’s name along with it.

But to most Select Board members, signing off on a formal letter that chides the Great Barrington Declaration as “amoral” and “callous” is over the top.

The board on Monday declined to support a motion to send the letter to three infectious disease scientists and the American Institute for Economic Research in an effort to further distance the town from the document and its ideology. 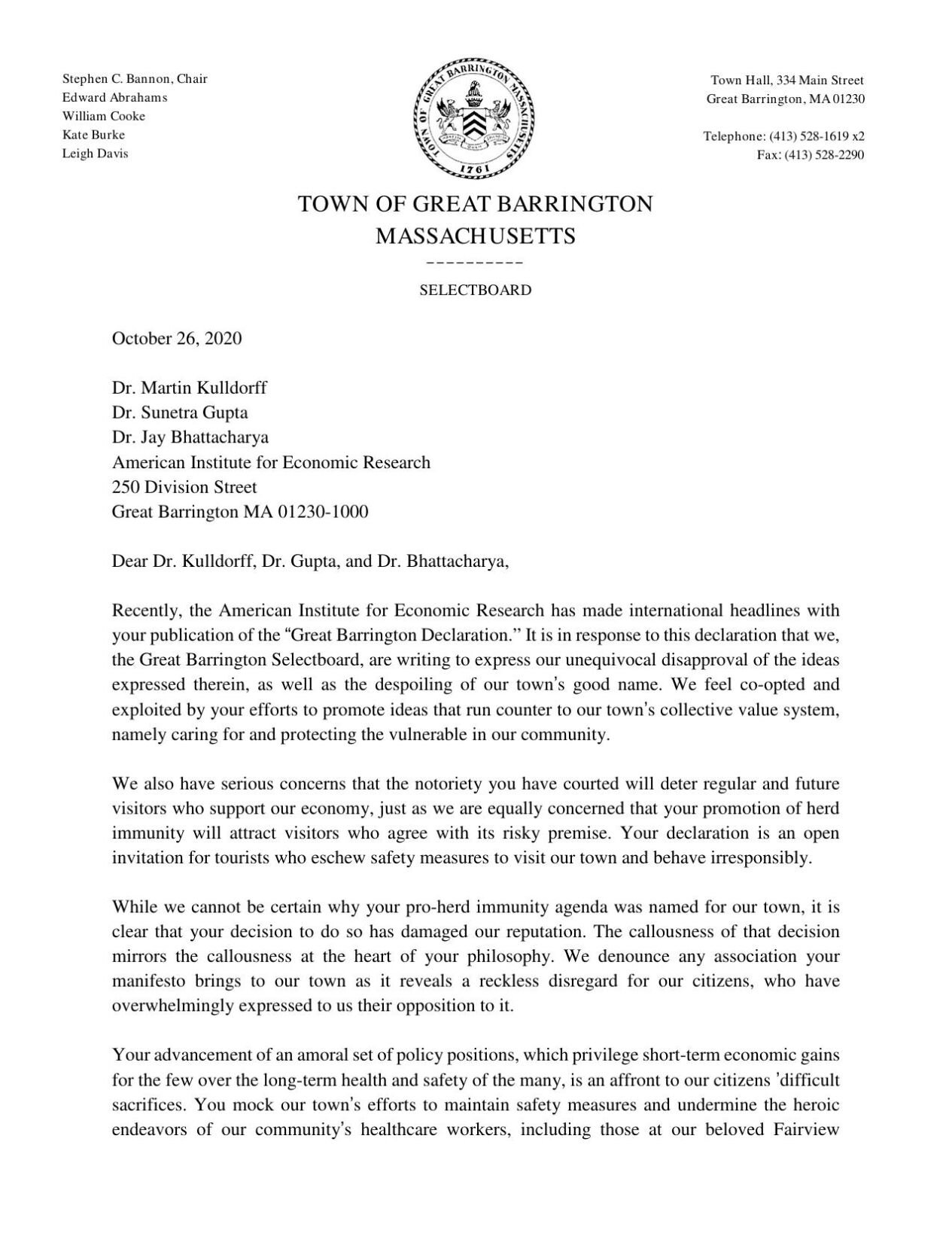 The letter didn’t represent the views of all town residents, and is potentially an assault on free speech, said board Vice Chairman Ed Abrahams, who led the board away from endorsing it.

“I’m a little concerned about a government body taking issue with the content of speech of a group message,” said Abrahams, noting that he did not agree with the declaration. He added that the tone of the letter would contribute to an already charged political atmosphere.

The letter, written by Select Board member Leigh Davis, is the latest in a scramble to let the world know that the town does not endorse the document, which has gained more than 600,000 signatures as of Tuesday — including 200 in Berkshire County and 48 in Great Barrington. It was released on Oct. 4 by three infectious disease specialists after they gathered at AIER’s Division Street campus to discuss the COVID-19 pandemic.

The document calls for “Focused Protection,” which “allows those who are at minimal risk of death to live their lives normally to build up immunity to the virus through natural infection, while better protecting those who are at highest risk.”

The scientists — Dr. Martin Kulldorff, of Harvard University; Dr. Sunetra Gupta, of Oxford University; and Dr. Jay Bhattacharya of the Stanford University Medical School — contend that the lockdowns are causing devastating public health fallout, such as delayed cancer screenings, vaccinations and mental health issues. And they say that COVID-19 should not be treated as the only threat to public health.

The declaration has been slammed by a number of their peers who question certain assumptions about herd immunity. Dr. Anthony Fauci, the government’s leading infectious disease specialist, called it “total nonsense.”

But, it also has been praised by other public health scientists, and the Trump Administration’s embrace of the ideas in the declaration has sown more opposition.

Still, board member Bill Cooke said he was “a little concerned” about the tone of the letter, even though he found the declaration “ridiculous.”

“I mean, do we really need to condemn their morality?” he said.

The board appeared satisfied with a letter to the editor of The New York Times penned by Town Manager Mark Pruhenski and Select Board Chairman Stephen Bannon.

“This dark, Darwinian notion, if taken seriously, would cause millions of deaths, undermine scientific evidence and decimate the ethics and morality of public health,” they wrote in the letter, which has yet to be published.

The town also hired Business Wire for $1,160 to circulate its press release on the matter last week to hundreds of news outlets nationwide. The town’s local public relations firm is handling other aspects, including social media.

Davis said she initially drafted her letter after listening to residents outraged by it, and she also wrote that it could either flood the area with those who think the town has lax social distancing, or cause visitors to flee for fear of weak precautions. She said she plans to rework her letter in hopes of getting the support of the rest of the board.

She said the declaration is “despoiling to the town’s good name.”

Apparently, not everyone in town agrees, given the local signatures on the document. It’s something AIER worries that “cancel culture” might wield like a hammer in the community if the names of supportive residents are released.

As the nonprofit begins to release the signatures of scientists in batches, it is right now reluctant to reveal the names of local signers.

“We are actually concerned about reprisals and hate,” said Jeffrey Tucker, editorial director at AIER. “We have to act responsibly.”