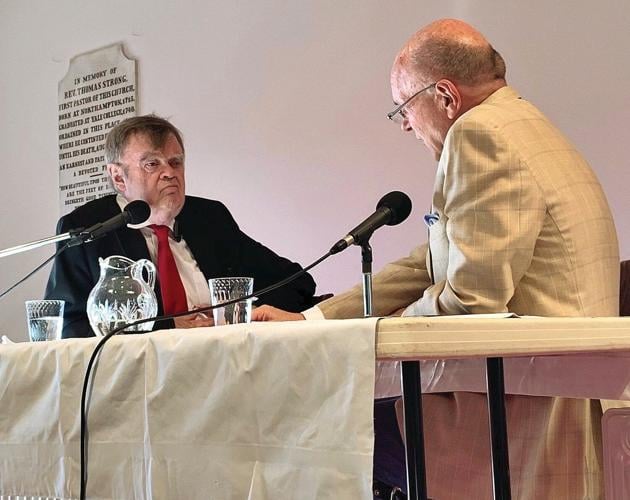 In October 2019, Garrison Keillor, left, talks with author Simon Winchester in New Marlborough about his downfall from Minnesota Public Radio and “A Prairie Home Companion.” 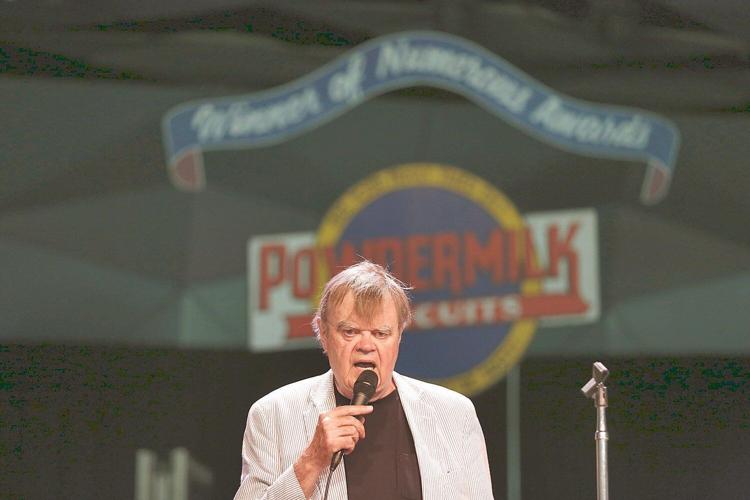 Keillor rehearses at Tanglewood in Lenox in June 2016. In the audience during his farewell show, tears were shed.

In October 2019, Garrison Keillor, left, talks with author Simon Winchester in New Marlborough about his downfall from Minnesota Public Radio and “A Prairie Home Companion.”

Keillor rehearses at Tanglewood in Lenox in June 2016. In the audience during his farewell show, tears were shed.

LENOX — In what appears to be a remarkably candid, brutally honest and highly self-critical memoir, Garrison Keillor titles a chapter, “An Easy Descent into Oblivion.”

He describes pressure from Minnesota Public Radio’s [MPR] corporate “wolves watching from deep in the pines” to wind down his creation, “A Prairie Home Companion,” after 40 years on national airwaves. Broadcast every Saturday evening from St. Paul, Minn., and on tour, it had a loyal weekly audience of several million.

In early summer 2016, Keillor aired farewell shows from Tanglewood and from the Hollywood Bowl. In the audience, tears were shed. The host, who never used his name on the air, seemed stoic.

In November 2017, he was accused by a 13-year employee who had been a friend of a sexualized come-on and of seemingly flirtatious emails to several other women. Keillor lost control of his “Prairie Home” archives and cottage industry of memorabilia (eventually regained in a settlement with MPR). His syndicated newspaper column distributed by The Washington Post was dropped, along with his touring dates, lecture schedule and much of his legacy.

It seemed like punishment not befitting what amounted to probably inadvertent misbehavior. Fellow Minnesotan Al Franken had a similar experience, leading to his resignation from the U.S. Senate and disappearance from politics and the media.

It was one of the most abrupt political downfalls in recent memory. When Franken was asked by the New Yorker magazine’s Jane Mayer if he regretted his decision to resign, he said, “Oh, yeah. Absolutely.”

Speaking of his own downfall in October 2019, Keillor told author Simon Winchester at a sold-out event in the New Marlborough Village Meetinghouse that “it’s injustice on behalf of a good cause. The way you change behavior is to whack prominent men with a two-by-four. You don’t change behavior by beating up on construction workers, bus drivers, or men who whistle at women.”

“MPR disposed of me without remorse and, oddly, life was better for it,” he wrote in his recently published memoir. “They showed me the emptiness of corporate culture — everyone is disposable, forty years is a box of Kleenex.”

“The University took my picture down from its gallery of distinguished alums. I finally got the chance to live a quiet domestic life with the woman I love and write comedy. This is the beauty of misery — it invigorates you to work, work is what relieves misery. Good work rouses your heart to live another day.”

Most of “That Time of Year: A Minnesota Life” (Arcade, $30) chronicles Keillor’s early life, the glory years of “Prairie Home,” the creation of his signature Lake Wobegon monologues and 27 books (the latest novel is “The Lake Wobegon Virus”). The book also delves into his struggles with family, marriage and other interpersonal relationships before finding long-lasting happiness with his third wife, violinist Jenny Lind Nilsson, and their daughter, Maia.

Justifiably proud of his radio show, he emphasizes “the fact that for decades a staff of fifteen or so put on thirty-five broadcasts a year and another fifteen or twenty shows in a summer tour, plus a dozen Prairie Home cruises with 1,200 guests, plus marketing and ‘The Writer’s Almanac’ and much more, and did it quietly and stayed friends and took pride in their work.”

Summing up his career, Keillor wrote: “My great accomplishment was to gain competence at work for which I had no aptitude, a solitary guy with low affect who learned to stand in front of four million people and talk and enjoy it. … I had less stage presence than the average stone post, but audiences are polite and they gave me the benefit of the doubt.”

During an encounter in 2010 at an authors’ event held at The Mount, Edith Wharton’s mansion in Lenox, Keillor avoided eye contact with me, as he typically did with adults, but was perfectly affable and charming with our son, then 7, kneeling down to his eye level for a brief chat.

Just before his final “Prairie” broadcasts, Keillor told Jane Pauley, on “CBS Sunday Morning,” that “I’m a loner. You can tell that by the fact that I never make eye contact.” He also acknowledged that he considered himself high-functioning on the autism spectrum.

Now 78 and living in Manhattan, he’s still distributing a daily podcast, “The Writer’s Almanac,” which had aired on public radio for 25 years, writing for hours every day, working on a variety of projects and maintaining his website.

A few days ago, in Keillor’s weekly newsletter to subscribers, he dropped a tantalizing hint: “This fall I hope to get back on the road with an odd show, a jumble of stories and songs and poems …”

Next Saturday: In an email interview with The Eagle, Keillor shares his thoughts about the loss of celebrity, the simple but personally rewarding life he and his wife, Jenny, have carved out on Manhattan’s Upper West Side, regrets about retiring too soon from “Prairie Home” and his thoughts about resuming public appearances.