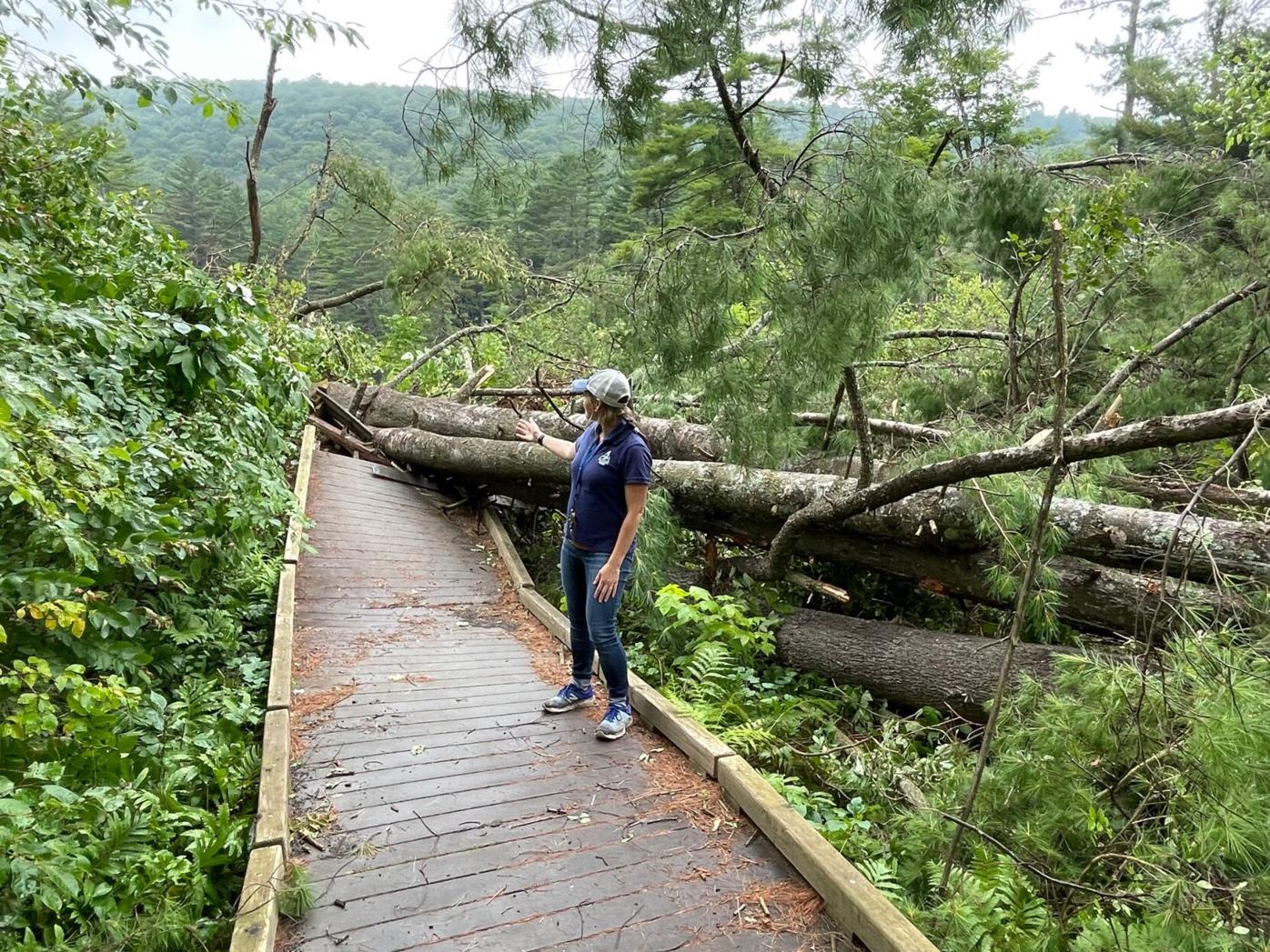 Mass Audubon West Director Becky Cushing Gop inspects the boardwalk that was damaged in Tuesday’s storm, which devastated much of the Pleasant Valley Wildlife Sanctuary in Lenox. 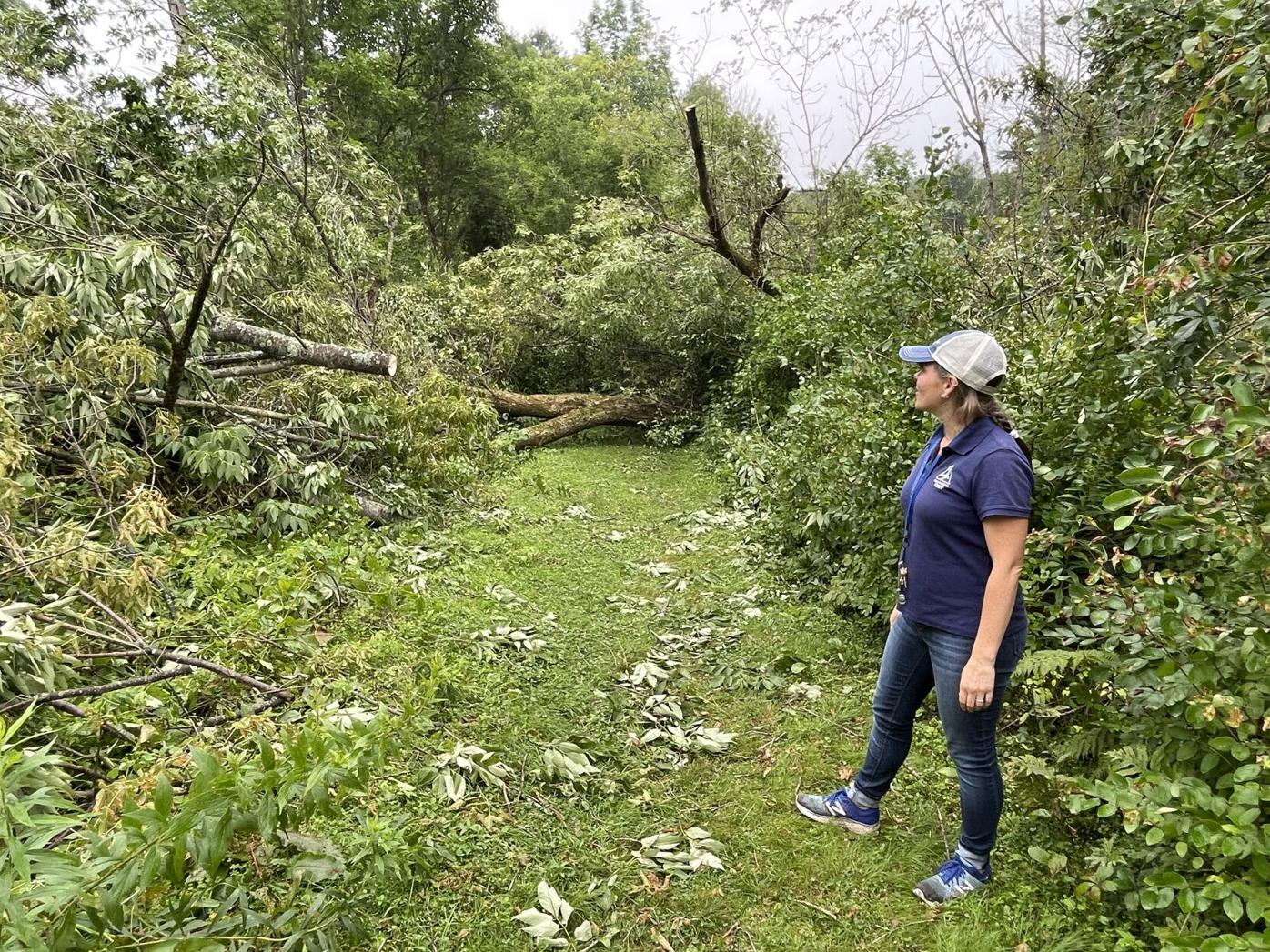 Mass Audubon West Director Becky Cushing Gop inspects the boardwalk that was damaged in Tuesday’s storm, which devastated much of the Pleasant Valley Wildlife Sanctuary in Lenox.

LENOX — It was a heart-stopping sight for me, a frequent visitor to Mass Audubon’s Pleasant Valley Wildlife Sanctuary for 60 years.

Nothing can compare with an up-close view of the destruction wrought by the unnamed, hurricane-force windstorm that tore through the sanctuary before inflicting widespread damage elsewhere in Lenox early Tuesday evening. Seven miles of trails had to be closed right away, and only one-quarter of those are reopened.

For many of us, it’s a treasure, an 1,100-acre oasis for walking, attending nature programs and youth camps, and admiring a paradise of wildlife and forests and a trail network from easy to challenging that includes access to the summit of Lenox Mountain.

But, with thousands of downed trees and branches strewn around the sanctuary like matchsticks, and damage as far as the eye can see, I had to fight back tears as I toured part of the trail system, with so many mature healthy trees that were snapped or uprooted. Hard to fathom what it will take, and how long, to restore Pleasant Valley to its tranquil, scenic beauty. Will it ever be same, or is it permanently changed?

Now, in the aftermath of the vicious storm, many trails are still closed, but the summer camp program for youngsters remains open and visitors can still tour the scene with a specially marked map indicating safe areas for walking.

One out-of-town, first-time visitor, arriving Wednesday morning unaware of the devastation, immediately wrote a $1,000 check as an unsolicited donation.

With a preliminary estimate of up to $500,000 for restoration — much of that is to replace the beloved boardwalk leading to Pike’s Pond, where resident beaver colonies ply their trade — Mass Audubon West Director Becky Cushing Gop managed to find silver linings on Thursday.

“It can be discouraging, but that $1,000 donation put wind in our sails,” she said. “We have a community here that’s so special, and we know people will step up and help us.”

Fire Chief Chris O’Brien, coordinating the storm-aftermath impact, is aware of Pleasant Valley’s plight. Not including Tuesday’s storm, the town had about $3 million in damage from persistent torrential rainfalls, and it might seek state and federal emergency aid, if available.

Cushing Gop saluted the volunteers who had helped clear a few of the trails on the morning after. But, as she noted, “On the Waycross Trail, there’s no way ’cross right now. There are some trails that are impassable, and it truly means that. We are asking people to really respect that designation.”

She marveled that there were no injuries when what looked like a mini-tornado struck late in the day, when a few hikers were still on the grounds.

Here are edited excerpts from our conversation:

Q: What were your first impressions when you arrived on the scene?

A: I suspected there would be damage, but no idea it would be to this extent. To have every trail access completely blocked was a combination of “What do we do; how terrible it is,” because here we have campers and hikers arriving.

After that sank in, it was the realization that it would take us months, if not more, to really recover from. It was sad, it was shocking; people have said they got teary-eyed seeing the boardwalk in the shape that it’s in because it’s a such a loss.

Q: How much of the trail system remains closed?

A: Probably 50 to 75 percent, including some of the most popular ones. We’ve been able to open up some shorter loops and access to the popular summit via the Overbrook Trail. I called in staff from Arcadia Wildlife Sanctuary in Northampton before I even let myself feel a sense of shock and loss.

With our local staff, we were all out there with bow saws, chain saws, putting up signage, talking to visitors. It was an all-hands-on-deck situation, for sure.

Q: What are the top priorities in the coming days?

A: No. 1, blocking off unsafe areas with signage, since there’s some damage we can’t handle with our staff and will need tree-removal experts or other consultants. We’ll have short loops for people, and we’ll need to figure out how to repair the Pike’s Pond boardwalk, part of our All-Persons Trail, which has areas that were rutted out and unstable because we’ve been getting so much rain.

The boardwalk has to be removed; it’s a sensitive wetlands area, we have to do everything really carefully. The replacement involves engineers and helical piers, it’s not just putting a bunch of wood into the boardwalk.

Q: When would the boardwalk be restored?

A: We’re trying to get some estimates of what it would take to reconstruct it by reaching out to well-known trail designer Peter Jensen to see how much will it cost, what’s it going to take, who’s going to do it.

Q: What’s your estimate of the total damage cost?

A: It could be $500,000, the upper limit; the boardwalk is very likely more than half, at least a quarter-million dollars. Then there’s tree work, compaction of gravel, broken windows in the office — a lot of unknowns, but it’s going to be very expensive.

Q: How will the necessary funding be raised on the heels of a $1.1 million campaign for restoration and expansion of the historic barn, which narrowly missed damage from the storm?

A: It’s going to be a combination; we know people care about Pleasant Valley, so, there’ll be fundraising from individual donors and we’ll look at opportunities for grant funding. We have experts I’ll be working with, a team that’s helping us.

Q: Are you hopeful about the restoration?

A: I think people will face this with patience and kindness, and know that we are working really hard to get the trails open as soon as we can. We know how much this place means to people. Our staff is amazing, working hard; it was really incredible to see people come together.

A: After the storm, there were so many birds coming through. In the areas where trees had come down, they were just sort of investigating. But, the sanctuary is changed permanently.