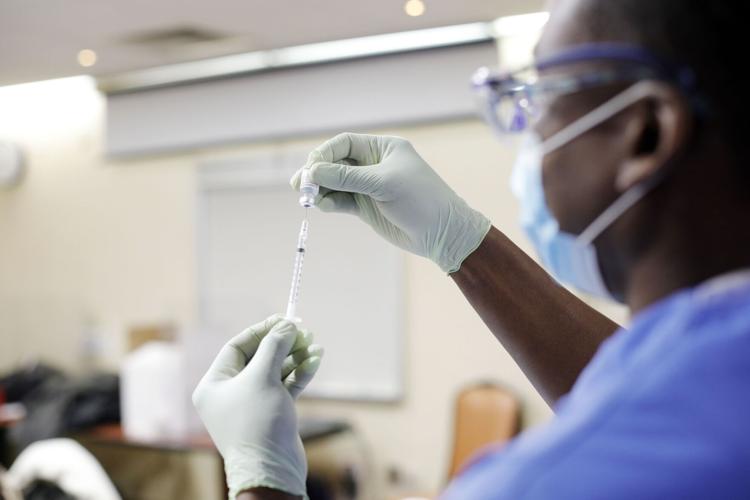 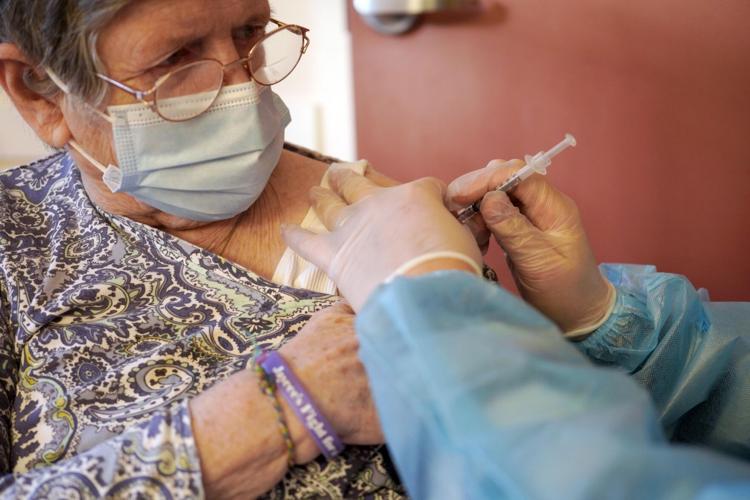 According to data from the state, all skilled nursing facilities enrolled in the federal government's Pharmacy Partnership for Long-Term Care Program have completed their first-dose clinics. Judy Ryan received her COVID-19 vaccination at Kimball Farms Nursing Care Center in Lenox in December.

According to data from the state, all skilled nursing facilities enrolled in the federal government's Pharmacy Partnership for Long-Term Care Program have completed their first-dose clinics. Judy Ryan received her COVID-19 vaccination at Kimball Farms Nursing Care Center in Lenox in December.

{child_flags:top_story}County gears up for Phase Two

With the state on the verge of Phase Two, local vaccine coordinators hope to set residents at ease with a new website and reassurances that upcoming clinics are keeping seniors’ needs in mind.

The Berkshire Vaccine Collaborative launched getvaccinatedberkshires.org Friday to help people through the vaccination process, with answers to frequently asked questions, and resources in English and Spanish.

The collaborative is made up of Berkshire Health Systems, Community Health Programs, the Berkshire County Boards of Health Association and public health nurses.

The website comes online after statewide criticism that the registration process has been unnecessarily complex. Many seniors who tried to sign up this week found themselves frustrated and confused, facing sites that crashed and long virtual waits at pharmacy websites.

While there are no appointment slots currently available at public clinics, health officials have asked residents to continue to check maimmunizations.org.

An estimated 18,000 people 75 and older become eligible for vaccinations starting Monday. Rollout coordinators have estimated it could take a few weeks to a couple of months to vaccinate the entire group.

At least 7 percent of Berkshire County residents have received one or more doses of the vaccine, according to state data reported to lawmakers Thursday. The Berkshires drew praise for administering the highest rate of vaccinations statewide, with most counties hovering at 4 to 6 percent of residents vaccinated, per the report.

It is not clear whether the data provided to lawmakers includes doses administered through the federal government’s Pharmacy Partnership for Long-Term Care Program.

As of Tuesday, Massachusetts had administered nearly 500,000 cumulative doses out of about 1 million allotted, according to state data.

What to expect at your vaccine appointment

The county’s major public vaccination clinics require proof of age, and clinic staff will check IDs. Phase One recipients, who remain eligible, should bring proof of eligibility as well.

Laura Kittross, director of the county health boards association, urged recipients to wear a short-sleeve or loose shirt and to arrive no more than 10 minutes early.

“The scheduling is pretty precise, so, when people arrive too early, we end up with lines,” she said. “If they do arrive early, we suggest sitting in their car until their appointment.”

Vaccine coordinators have asked recipients to come alone, though anyone who is unable to enter independently can have someone accompany them.

Everyone will be expected to stay for a 15-minute observation period, bumped up to half an hour for people with a history of anaphylaxis. Clinics will have medics on-site to handle any rare, severe reactions associated with the vaccine. Minor side effects, such as chills, fever and pain at the injection site, are more common and typically manifest within 24 to 48 hours.

“Older adults are less likely to have side effects,” Kittross said. “But, they are normal if they occur and a sign your body is mounting an immune response.”

The three major vaccination sites, in Pittsfield, North Adams and Great Barrington, are all handicap-accessible. Clinics will have wheelchairs on hand, and regular chairs for people waiting in line. Volunteers and staff will help recipients navigate the clinics.

Each site uses a separate entrance and exit, which means recipients will leave the buildings some distance from where they entered.

“If conditions allow, there will be golf carts to help ferry folks back to their cars as needed,” Kittross said. “But, if mobility is a problem, we suggest having someone drive them and pick them up at the back door if at all possible.”

Kittross said that local vaccine coordinators have been reassured by the state that second doses will be sent automatically. People will be notified at clinics about how to schedule their second appointment, she said.

Registration links for second-dose clinics will be sent out one to two weeks before that appointment.

“If [your second-dose date] is less than five days away and you have no appointment, please call one of the councils on aging that are listed as assisting,” she said.

As Massachusetts transitions into Phase Two, state and federal data shows that the commonwealth has been slightly more successful getting vaccines into arms than the federal government’s Pharmacy Partnership for Long-Term Care Program.

The partnership program with CVS and Walgreens uses doses from the state’s allocation and serves some, but not all, of the state’s nursing homes, congregate care homes and similar facilities.

The program had used about 46 percent of its doses as of Friday, while the commonwealth had administered about 50 percent of the rest of its allocated vaccines as of earlier this week, according to state and federal data.

On Monday, the state announced that it temporarily would stop the program’s allocations.

“These programs have been much slower to ramp up than initially anticipated,” said Secretary of Health and Human Services Marylou Sudders. “After back-and-forth with the federal government, we received permission to pull back doses and halt further vaccine allocation into the federal program.”

As of mid-January, Sudders said, there were 300,000 doses allocated to the federal program. By Friday, the program had used 138,000, according to the Centers for Disease Control and Prevention.

Sudders stressed that CVS and Walgreens have been “good partners” and that the state will resume vaccine allocations once the program uses more of its doses.

In a statement, CVS said the company’s long-term care vaccinations were on schedule and that Gov. Charlie Baker’s decision “helps ensure that these valuable doses will be put to the best use.” The company also said it was “navigating the challenges of a complex rollout” in which states selected start dates.

Walgreens told The Eagle that many facilities across the country provided overestimates of the number of doses they would need, because of “fluctuations in occupancy levels and the impact of vaccine hesitancy,” causing some excess supply to be allocated to the program.

Data shared with state lawmakers Thursday shows that every single skilled nursing home enrolled in the program in Massachusetts has had at least its first-dose clinic.

But, that same data shows that a significant portion of the other facilities that opted into the program have yet to receive vaccines — and that some have not received a scheduled date for their first clinic.

About three-fourth of assisted living residence and continuing care retirement communities in the program have completed their first clinic, according to the data. The rate drops to 57 percent for rest homes, 43 percent in supportive housing for low-income elderly, and 46 percent at congregate care clinics.

According to the data, one-third of first-dose clinics for congregate care vaccinations through the program have not even been scheduled.

On Friday, Walgreens told The Eagle it had administered first dose clinics in 241 of 425 assisted living facilities and was on track to complete the rest by mid-February.

Meanwhile, CVS said it had finished first doses in 72 percent of its 1,714 assisted living sites and other long-term care locations.

Some of the variability can be attributed to the state’s timeline. While skilled nursing homes were among the state’s earliest priorities, other facilities did not become eligible until later in Phase One.

But, to get shots in arms a little sooner, at least one local organization opted out of the federal program.

Paul Hickling, vice president of service operations for The Brien Center, said the organization originally had planned to vaccinate residents through the program, but Walgreens’ clinics were scheduled for “further down the road.”

When the Berkshire Vaccine Collaborative offered to inoculate residents earlier than Walgreens would, Hickling said, the center decided to take advantage.

Brien Center staff also were able to get vaccinated through the county’s efforts, the same week that congregate care vaccinations were allowed to start. Under the federal program, Hickling’s staff would have had to wait until Thursday — more than two weeks after they became eligible.

Look Ahead, Pittsfield: Week ahead brings an injection of hope for some residents, path forward for city government

PITTSFIELD — For city residents ages 75 and older who secured a slot at one of the county’s vaccination clinics, this week brings an injection…