NORTHAMPTON — After his firm filed a class-action suit against employees of the state-run Holyoke Soldiers’ Home, attorney Michael Aleo received a slew of calls from families across Massachusetts who also lost loved ones in private nursing facilities ravaged by COVID-19.

Yet, those families will have difficulty building a case.

On April 17, about one month after the U.S. declared a coronavirus pandemic, Gov. Charlie Baker signed legislation that shields nursing facilities, hospitals and health care workers from liability, citing the emergency law as “necessary for the immediate preservation of the public health and convenience.”

This would raise the bar for families to prove a higher level of negligence by the facility regarding death from an outbreak, or any type of claim. It also would be hard to gather that information, critics say, particularly during lockdowns that have kept visitors — that is, until December — ombudsmen and routine inspectors out of facilities.

“You’d have to prove gross negligence or recklessness,” Aleo said. “That’s a tough claim, but not insurmountable.”

The Soldiers’ Home case is different. Baker had ordered an investigation of the circumstances that led to dozens of deaths there. The report on the scandal, essentially, might have built that proof, and a parallel criminal prosecution of some employees is underway, adding teeth, Aleo said.

“We think that, based on the evidence just in the report Baker commissioned, that it is apparent that [the Soldiers’ Home case] goes far beyond regular negligence,” he added.

And because the employees at that facility worked for the state, lawyers had another option.

“It allowed us to pursue this not just under negligence theory, but that of veterans having their constitutional rights violated,” Aleo said.

Aleo and his partner, Thomas Lesser of Lesser Newman Aleo & Nasser LLP are representing the estate of veteran resident Joseph Sniadach and the other victims’ families. Together, they are asking for $176 million in damages on the grounds that their suffering violated their rights under the 14th Amendment.

“You could argue that it should be a lot more than that,” he said. “How do you put a price tag on the lives of these veterans?”

{child_flags:editors_pick}Terrible toll: Half of Berkshires COVID-19 losses came within nurs…

At Soldiers’ Home, more than 76 elderly residents died and more than 80 were sickened amid what the Baker report said were catastrophic failures in mishandling a COVID outbreak there in April, like a decision to consolidate dementia units that created “total pandemonium.”

Like embattled Gov. Andrew Cuomo in New York state, Baker has been criticized for moving quickly to guard facilities from lawsuits.

Aleo said that, in April, at least a dozen more families will join the class-action suit. And a second, similar, suit against Soldiers’ Home staff was filed in U.S. District Court in December.

Aleo said he agrees that there should be a “high bar” for these suits, which, by design, the law discourages. He said he doesn’t “fault the Legislature or Baker administration for enacting it.”

Liability also is inherently limited if a nursing home is run by a nonprofit, he said.

“You can still bring a negligence action, but you have to prove gross negligence,” Aleo said. “Even simple negligence is really difficult to prove.”

He said a three-year statute of limitations adds to the challenges.

“I’ve told over a dozen families that it just depends,” he said.

‘Watchful eyes that went away’

Those who advocate for elders and nursing home residents say COVID-19 has removed the only outside oversight of an industry that badly needed it, even pre-pandemic. And with a kind of blanket immunity, something like the mishandling of a urinary tract infection also would be subject to the same protections under the COVID law, said Alison Weingartner, executive director of the Massachusetts Advocates for Nursing Home Reform.

“That’s the mind blower,” she said. “It’s not just for COVID-[related claims]. It’s been a year, and we’re still laboring under these protections that the nursing homes are enjoying, and what it means is, you had all those watchful eyes that went away.”

Weingartner said that two-thirds of the state’s nursing homes were cited for infection-control failures in the past three years of federal inspections.

“And now you’re saying that they can’t be held responsible, and the way they have the law written, [proving gross negligence] would be threading the eye of a needle in a haystack,” Weingartner said.

The Baker administration’s press office referred questions about this to the initial, April 8 press release about the new protections.

Between the the COVID law and the arbitration agreements that many facility residents are asked to sign — even though they don’t have to — a successful legal claim is nearly “impossible,” she said.

Paula Almgren, a Lenox-based elder law attorney, said that with facilities locked down, already-poor communications with the outside worsened, illustrating how families and others might not learn if anything is amiss.

“Many calls [came] to my office saying, ‘My husband just died, and I didn’t get a call; I didn’t know,’ ” said Almgren, who is also of the Massachusetts chapter of the National Academy of Elder Law Attorneys, which, in March 2020, asked Baker to open up beds for COVID patients by moving nursing home residents out of facilities.

She praises Baker for stopping it, which is something Cuomo did not, she pointed out.

“It’s almost like COVID was an excuse to not communicate,” she said. “The systems to protect people were all waived. I just don’t think that COVID should be a reason for not taking care of people.”

Industry leaders say facilities were thrown anew by a crisis not of their making, and suggest that the immunity laws are only fair.

“We, like nursing facilities across the nation, experienced severe shortages and challenges accessing Covid testing and securing vital personal protection equipment (PPE),” Tara Gregorio, president of the Massachusetts Senior Care Association, said in an emailed statement. “Additionally, government guidance on strategies to prevent and contain the spread of the virus within congregate care settings was constantly evolving and changing.”

Gergorio also suggested that facilities are at the mercy of infection in the outside community, “the single most significant contributing factor” in nursing home outbreaks.

Yet, the kind of negligence protected by COVID immunity law has engaged U.S. Rep. Richard Neal, D-Springfield, who asked federal regulators to reinstate a number of COVID waivers, and fortify other checks on the system that were lacking pre-COVID. 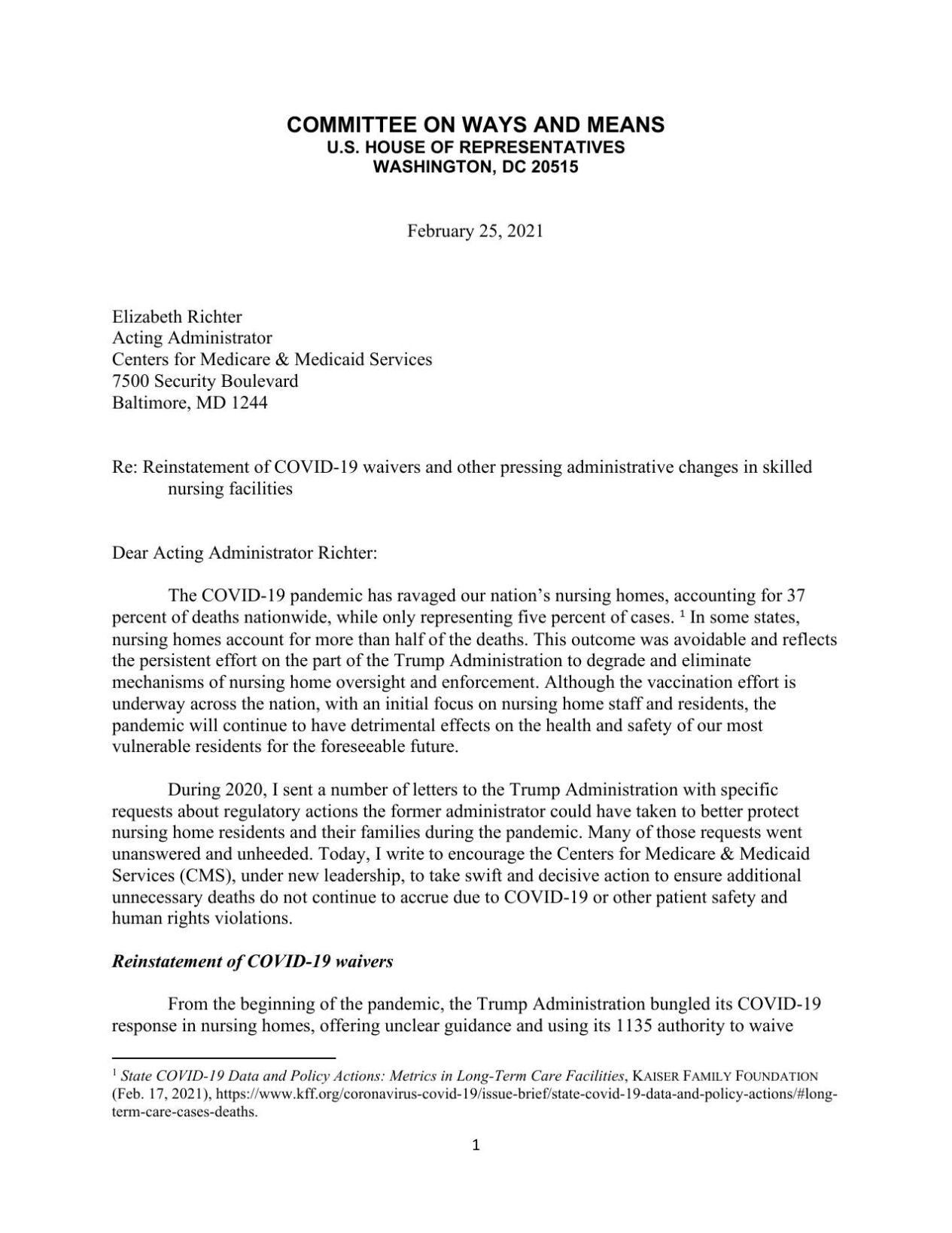 On Feb. 25, he wrote Elizabeth Richter, acting administrator at the federal Centers for Medicare & Medicaid Services, the agency that oversees facilities. He said he wanted some Trump administration rollbacks of Obama-era regulations rebooted, and noted how bans on visitors removed one key protection for residents during the pandemic.

“While this change was necessary to infection control efforts across nursing homes, it has been detrimental to the health of nursing home residents, isolating them further and eliminating a fundamental mechanism of oversight on the part of families,” Neal wrote.