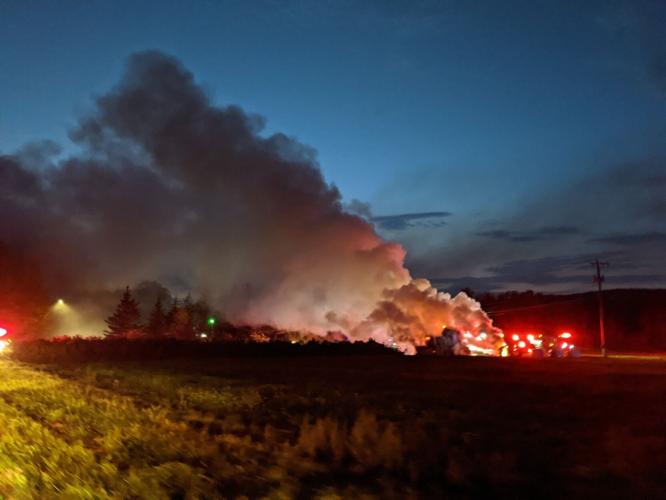 Hay bales with messages supporting the Joe Biden-Kamala Harris ticket burn Oct. 9, 2001, in Dalton. On Thursday, Lonnie Durfee of Dalton was sentenced to a year in the local House of Correction, less time already served, for setting the display on fire. 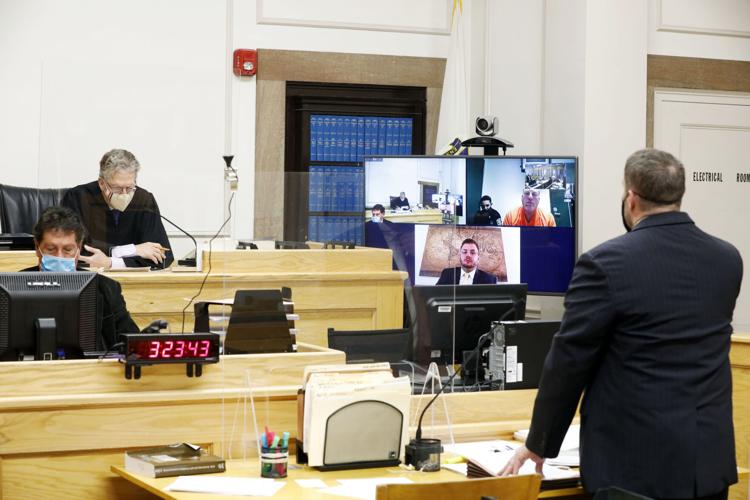 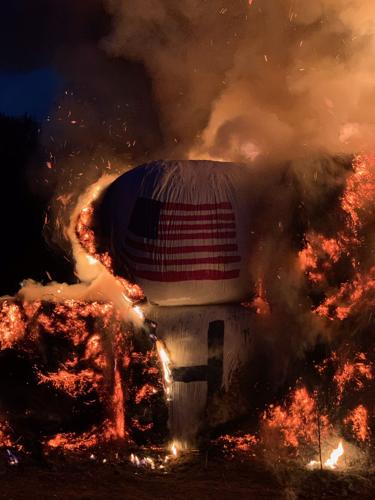 PITTSFIELD — Last month, a year in jail sounded like too much to Lonnie Durfee, the man who set fire last fall to a Dalton farm’s campaign endorsement, a crime covered around the world. On Thursday, he accepted it.

Judge Mark Pasquariello sentenced Durfee to one year in jail, the maximum penalty for the charge and the same sentence requested by District Attorney Andrea Harrington’s office.

It was the same sentence Judge Paul Smyth offered to Durfee last month, which prompted Durfee to withdraw his guilty plea. Defense lawyer Robert Sullivan had requested no additional time in jail.

“He thought the right thing to do would be to accept responsibility, accept the court’s recommendation and try to move on and use his time in jail, whether it’s through different programs the jail offers, to try to improve himself so when he’s restored to the community, he can be a law-abiding citizen,” said Sullivan.

“The use of fire has a deeply rooted association with political and civil rights intimidation. This fire victimized not only the property owners but represented a threat to entire communities,” Harrington said in a statement. “This sentence sends a message that our community will not accept those types of actions and that civility and respect will prevail.”

In court Thursday, Durfee said he was sorry for setting the fire and for “the effect that it had on the community,” according to Sullivan.

It was Oct. 9 that Durfee set fire to the newly erected hay bale display on the south side of Route 9, across from Holiday Brook Farm. Farmer Dicken Crane’s display bore the Democratic Party candidates’ names and consisted of 19 wrapped hay bales, weighing roughly 1,000 pounds each.

Durfee had made known his intention to burn the display, prosecutors said, telling patrons inside Paddy’s, a Dalton bar, and stopping at a local Cumberland Farms to purchase gasoline he used as an accelerant.

Durfee, a Trump supporter, went on to tell authorities that the Biden-Harris display angered him and he decided to burn it. Police said in a report that Durfee admitted setting the fire because he disagreed with its message.

According to the report, Durfee expressed support for law enforcement, anger at news organizations that he said “keep lieing [sic]” about Trump, and said Black people have more “rights than us.” Prosecutors also introduced undated photos taken from Durfee’s phone that showed Durfee standing next to a burning Black Lives Matter sign.

At a dangerousness hearing shortly after Durfee’s arrest, Deputy District Attorney Richard Dohoney said Durfee, who prosecutors said has a record of assaults, posed a threat to the public. Sullivan said his client’s judgment had been clouded by grief after the death of his 23-year-old son in a motorcycle accident in August, which intensified his alcohol use.

Durfee was initially held without bail in October after being found dangerous by a district court judge. He was released from pre-trial custody following a bail review hearing in Superior Court.

But, Durfee was found to have violated conditions of his pretrial release for consuming alcohol and was ordered back to pre-trial custody in the Berkshire County House of Corrections by Judge Paul Smyth in January. Smyth said Durfee had a history of violent behavior while intoxicated.