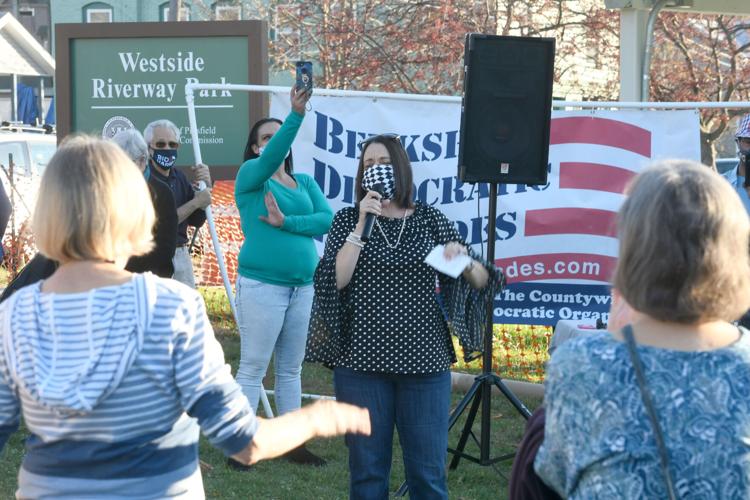 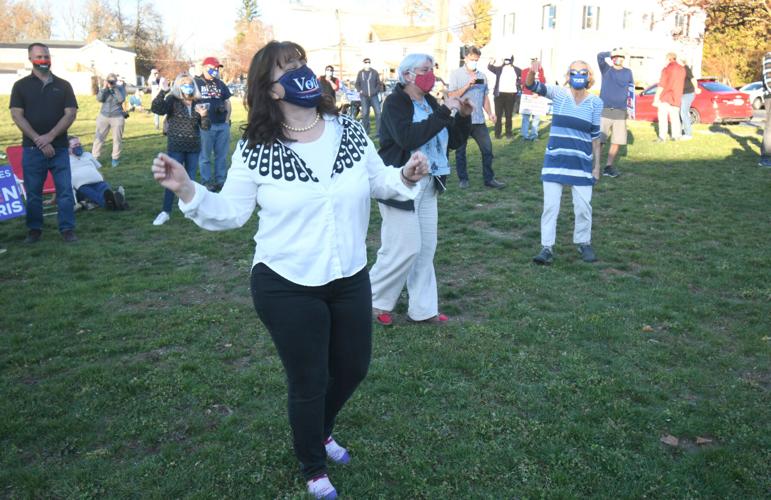 State Rep. Tricia Farley-Bouvier joins other democrats in dancing during The Berkshire Democratic Brigades' outdoor celebration rally at the Westside Riverway Park on Dewey Street in Pittsfield on Sunday. 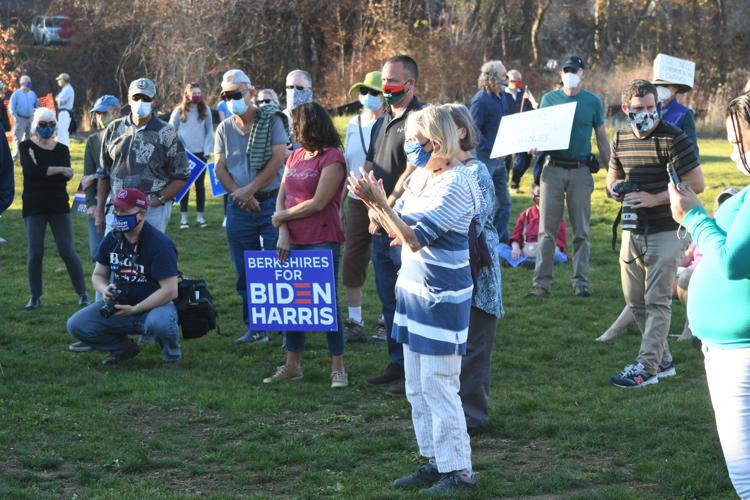 State Rep. Tricia Farley-Bouvier joins other democrats in dancing during The Berkshire Democratic Brigades' outdoor celebration rally at the Westside Riverway Park on Dewey Street in Pittsfield on Sunday.

The gathering at the Westside Riverway Park — for an event organized by the Berkshire Democratic Brigades — gave Biden-Harris backers a chance to let loose with songs like “Dancing in the Streets” and Kool & The Gang’s “Celebration” blaring throughout the park.

But the elected officials and community activists reminded the estimated 70-80 partiers that, starting Monday, they need to be part of the solution to unite an America divided under President Donald Trump the last four years.

“If we’re honest with each other, we’ve got work to do,” said Pittsfield Mayor Linda M. Tyer. “We are the Democrats who can build bridges. Let’s talk ... to the people who don’t think like we do.”

Nearly 71 million registered voters cast ballots for Trump, compared to the roughly 75 million that voted for Biden. Trump has vowed legal challenges to the vote in several key states, including Pennsylvania. Biden — as of now — won his birth state’s 20 electoral votes, and those tallies declared Saturday pushed him beyond the 270 needed to secure the presidency.

While Ann Carey, of Pittsfield, was “bursting with pride and joy” at Sunday’s celebratory rally, she was ready to help erase the racial divide in America.

“We have to deal with racism, that’s the undercurrent,” she told The Eagle.

For Peter Sibner, from Pittsfield, dealing with racism begins with changing the rhetoric coming from the White House.

“We don’t have to hear [any more] the Republicans let Trump spew hate, which is going to take a long time to fix,” said the Philadelphia-area native.

Democratic state Rep. Tricia Farley-Bouvier says the Berkshires is up to the task of uniting the country and preserving democracy.

“We have changed the trajectory of the country ... but what we have learned is democracy is fragile,” she said.

The preservation begins with reminding those who didn’t vote on Tuesday, their ballot would have been counted. Berkshire chapter president of the NAACP praised the “tremendous number” of black voters who went to the polls, but believes more work is needed to get young people to take elections seriously.

“We have got to stop the nonsense that our vote doesn’t count,” he said to the jubilant crowd. “Everyone has a civic duty to register to vote. I’m tired of young people saying [voting] doesn’t make a difference. Come January, it will make a difference.”

If Biden’s victory survives Trump’s expected legal challenges, he will be sworn in as the nation’s 46th president on Jan. 20.

Inauguration Day will be an historic one when Harris becomes the United States’ first female vice president, 100 years after women gained the right to vote with country adopting the 19th Amendment to the U.S. Constitution.

Community activist Shirley Edgerton paid tribute to the importance of women voting, especially in 2020. She led the gathering in a chorus of Helen Reddy’s signature song “I Am Woman,” an anthem of the Equal Rights movement that began in the early 1970s.

“I am women, hear me roar; in numbers too big to ignore,” sang Edgerton in the song’s opening line.