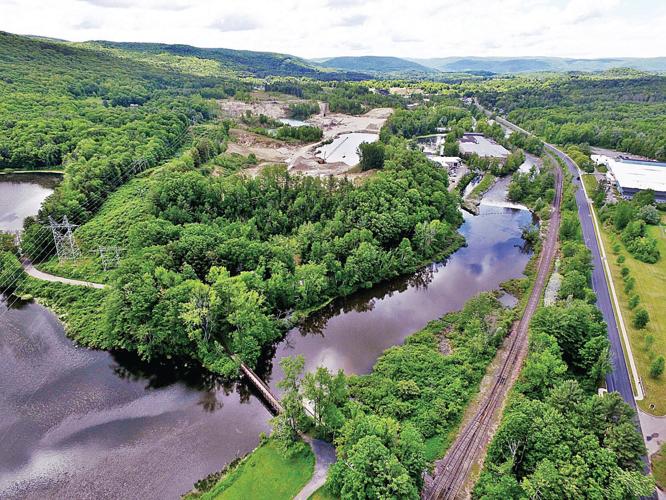 The Upland Disposal Facility that would receive about 1 million cubic yards of lower-level PCB-tainted sediments is planned for a 20-acre section of a former Lane Construction parcel just south of Woods Pond. The area to be used is to the left of the open quarry site shown in the upper center of this photo. 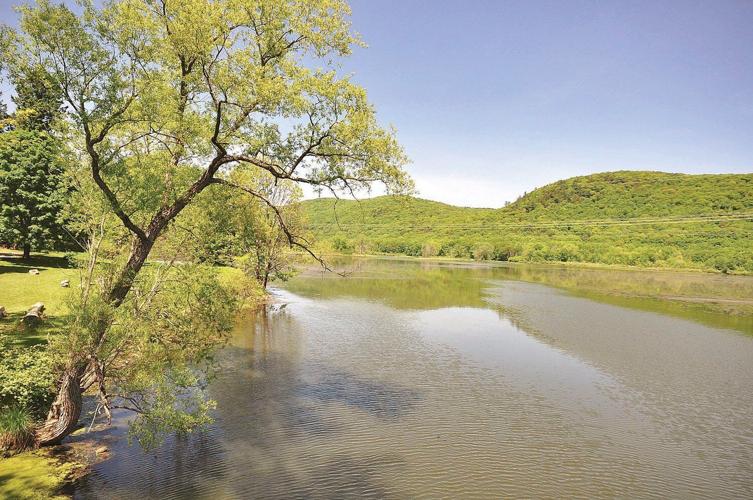 A view of Woods Pond along the Housatonic River near Lenox Station in Lenox Dale. The pond contains a large share of toxic PCBs that were released by former General Electric Co. operations upriver in Pittsfield and now are the focus of the Rest of River cleanup.

LEE — The deal to allow the General Electric Co. to bury chemical waste in Lee hangs, for now, on how a District of Columbia court resolves arguments piling up on its docket.

As opponents of a PCB landfill add flesh to their appeal, the Environmental Protection Agency is asking the court to trust and accept its judgment.

The latest brief from the EPA before the Environmental Appeals Board says justices should grant deference to the agency’s technical expertise, as case law has established, and find that the Housatonic River cleanup settlement reached in February 2020 is the best way to protect human health and accelerate removal of more than 1 million cubic yards of the polychlorinated biphenyls that GE allowed to despoil Berkshire County’s premier waterway.

In a boldly worded brief filed May 20, the attorneys for the Housatonic River Initiative and Housatonic Environmental Action League contend that after reaching terms with GE last year, the EPA’s Boston office did all it could to justify that pact in the months before issuing a revised Rest of River cleanup permit in December.

The EPA conducted a “supplemental comparative analysis” of the settlement’s plan to allow lower-levels of PCB-tainted sediment to be brought to a Lee landfill.

The brief says that work was “driven, at times explicitly, by the Region’s desire to keep the Settlement from falling apart.”

The agreement calls for sediments containing more than 50 parts per million of PCBs to be shipped for disposal out of state (the “hybrid” approach), just as the EPA’s 2016 permit had dictated, before it was challenged by GE and led to the 2020 settlement.

“Instead of actually assessing how ‘hybrid’ disposal would impact the environment, the Region was focused on how its remedy selection decision would affect the continued viability of the Settlement,” the brief states.

While these court briefs often are thick with legal and technical jargon, the newest one on behalf of the environmental groups opens by framing the settlement, and provision for a PCB landfill, as a power play by GE. 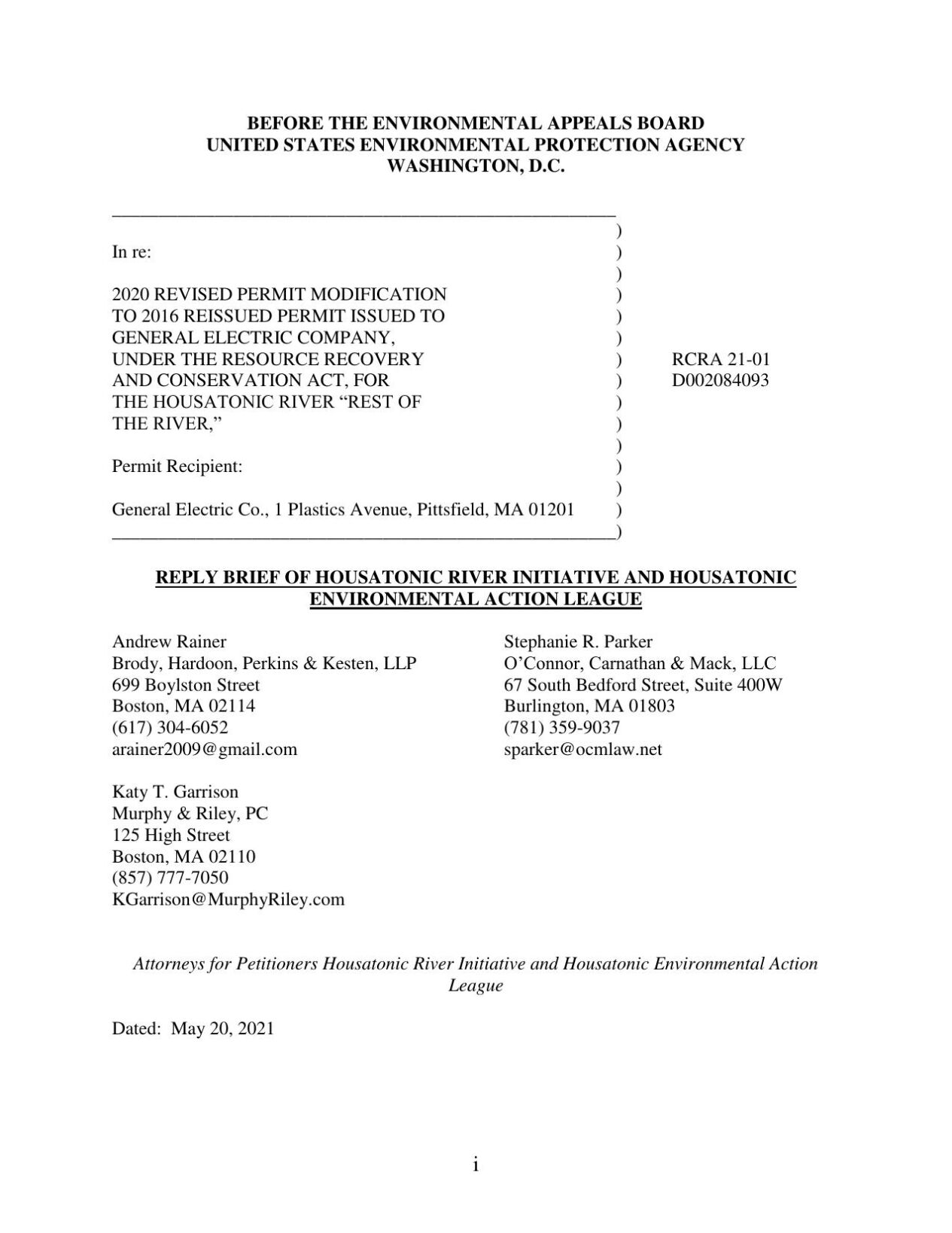 “Let’s be honest. What happened in this case is that, after the Board issued its remand decision, GE, the Region and a number of other parties entered into closed-door settlement discussions that did not become part of the administrative record,” it says. The company, the lawyers say, threatened to tie the case up in courts for decades and leave residents of Berkshire County wondering if the three dump sites proposed earlier in the process would come to pass.

The settlement spares GE $200 million in disposal costs, they say; out of that, the company used $55 million of savings to win buy-in from local officials. In this analysis, the lawyers turn next to the EPA.

“The Region, for its part, saw the deal as a way to get a 23-year-old ‘monkey’ off its back. After the deal was cut, the Region tried to find ways to justify it as ‘protective of human health and the environment,’” the lawyers write.

That, they claim in a 26-page filing, constitutes “the very definition of ‘arbitrary,’ ‘erroneous,’ after-the-fact justifications for a deal that GE designed, bought and paid for.” Further, by holding required public comment sessions in 2020, after reaching the settlement, the EPA did not honor the processes, the brief asserts.

“The concept of notice and comment is premised on agencies being open to change — if the agency has already agreed to a result, the public’s right to comment is meaningless,” it says.

On the question of the pace of a cleanup, the environmental groups argue that they “fervently desire to see the River cleaned up as soon as possible.”

They question the agency’s claim that time has been of the essence for the government, with lawyers writing: “The Region long ago forfeited any legitimate claim of urgency. If the Region truly believed that immediate action was necessary … it would have ensured that a remedy for the Rest of the River was in place twenty years ago. Apparently, however, timely implementation is only important now that GE has gotten its way (and saved millions).”

The current permit calls for more than a decade of work by GE.

The EPA, for its part, uses its latest 46-page filing to argue that its plan gets more PCBs out of the river and would do so sooner — addressing the “uncontrolled PCB contamination” that continues to threaten health. 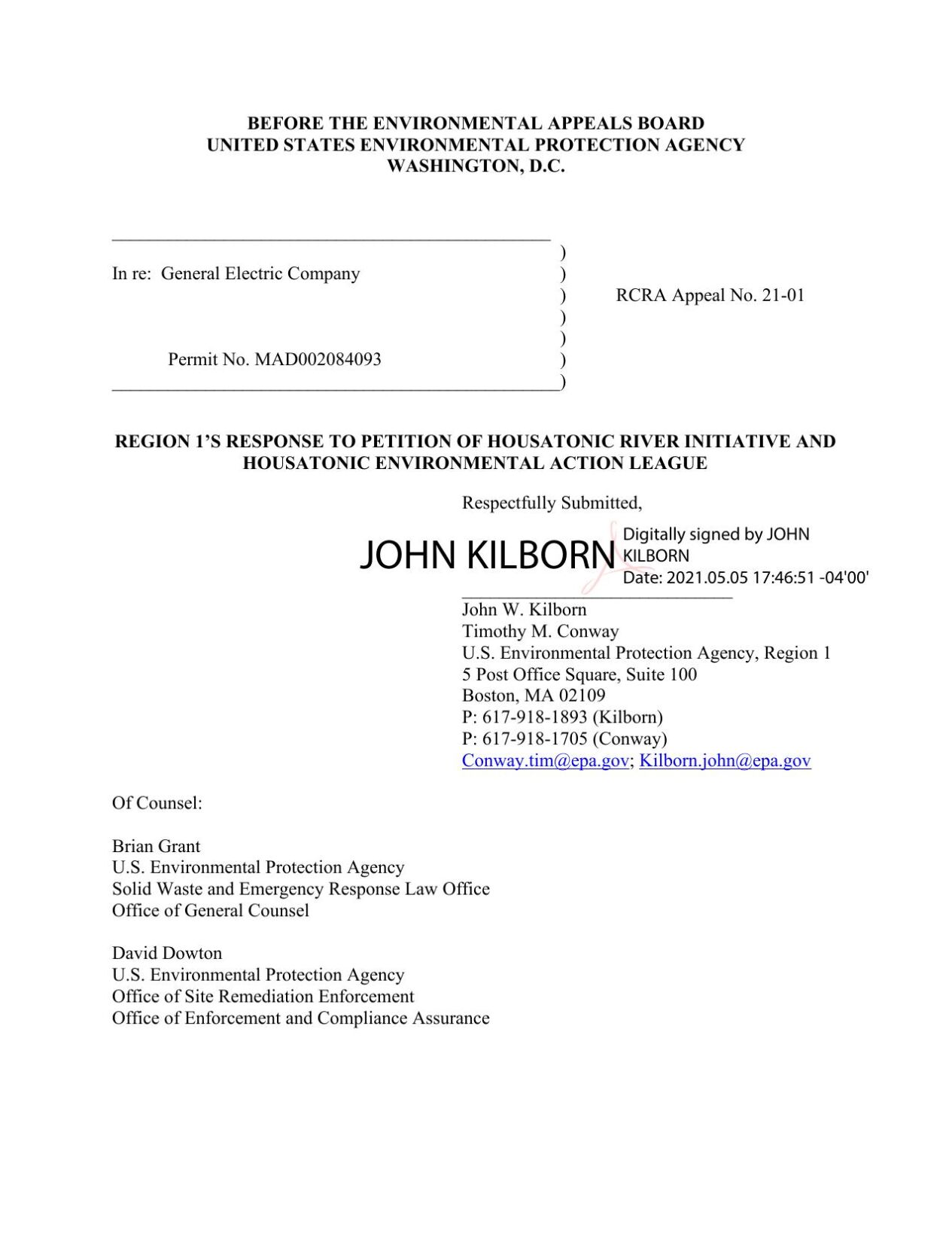 In a statement to The Eagle, the agency said: “EPA Region 1 stands behind the permit issued in December as the best suited remedy for addressing the risks posed by the PCBs in the Housatonic River and its floodplain.”

The agency’s shift of position on allowing a local dump site is allowable and defensible, it says, if explained publicly with “reasonable clarity.

The permit issued in December should stand, the brief says, because it was reached without any “clear error” in the legal process or an effective rebuttal, in the environmental groups’ appeal, of the safety or cost-effectiveness of the planned Upland Disposal Facility.

“The Board should not disturb the determinations of the Region’s experts, whose judgments deserve deference,” the agency said in its May 5 brief.

“The UDF will sequester the currently uncontrolled PCB contaminated sediments and floodplain soils that pose unacceptable risks into a containment landfill with multiple protective safeguards,” the EPA says.

The agency also takes aim at the appeal’s claim that the EPA did not adequately consider other ways of neutralizing the harmful effect of PCBs, a probable carcinogen.

“EPA has incorporated treatment into the remedy as much as practicable,” the government’s brief says. “Given the current unacceptable threats posed by the PCBs and the need to control sources of PCB releases to downriver reaches, however, the Housatonic River cleanup cannot be indefinitely delayed in the hope that a less invasive cleanup technology becomes viable.”

The EPA’s experts found that the hybrid approach to dealing with the PCBs was “viable” and not, as the environmental groups say, a flip-flop from the agency’s earlier findings of fact on cleanup options.

“Petitioners expend considerable rhetorical energy to paint the Region’s selection of a new disposal approach — Hybrid Disposal — as an unexplained reversal from its 2016 remedy selection, ignoring significant aspects of EPA’s basis of decision and Record in 2020. Contrary to Petitioners’ arguments, the Region explained, in detail, the basis for its decision to allow disposal of low-level PCBs in the UDF and demonstrated that the UDF fully protects human health and the environment.”

The EPA conducted a “supplemental comparative analysis” of the settlement’s plan to allow lower-levels of PCB-tainted sediment to be brought to a Lee landfill. The brief says that work was “driven, at times explicitly, by the Region’s desire to keep the Settlement from falling apart.”

Lee voters to get their say on proposed PCB landfill

Townspeople will finally get their say on whether Lee should host a toxic waste landfill.

Town meeting representatives voted 31-8 on Thursday night to allow local residents to vote on the controversial waste dump. The decision was made during an hourslong annual town meeting that went late into the evening at Lee Middle and High School football field.

A family business that’s operated in Lee for half a century will drop use of one of its properties, after being cited by the state environmental officials. The Department of Environmental Protection says L.B. Corp. has been running a materials recycling plant without a required permit.

Lawyers are gearing up for the next — and possibly last —  legal fight over the government’s plan to remove toxic pollutants strewn into the Housatonic River decades ago by the General Electric Co.

Before PCBs are again hauled from the Housatonic River, a legal fight may get a little mopping up of its own.