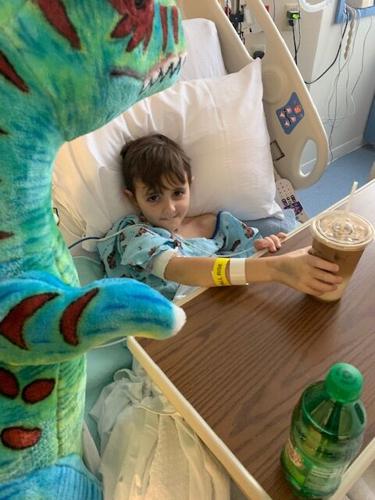 Carter LaCasse, 8, of Pittsfield, has been diagnosed with acute leukemia of ambiguous lineage. 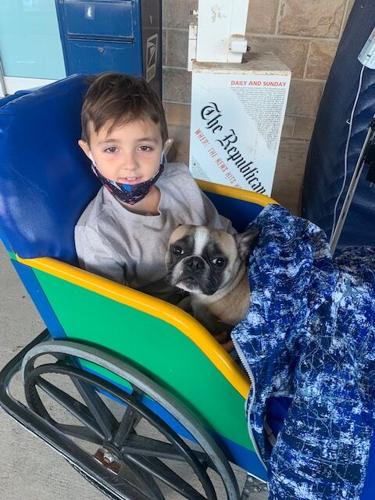 Carter LaCasse, 8, visits with his dog, Gorgu, outside of the hospital. 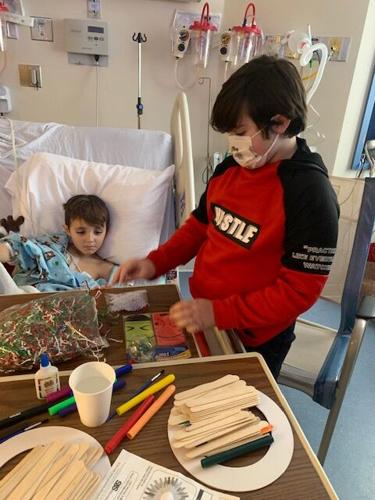 Carter, 8, and his brother Tyler, 10, work on a holiday craft project. 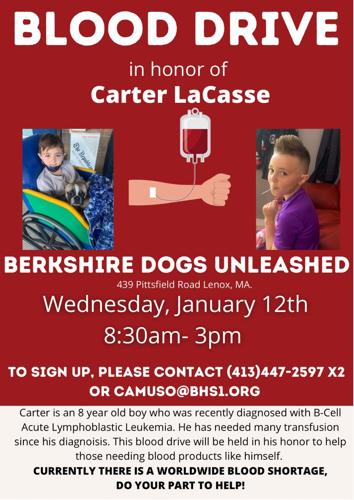 “When we endure suffering, and we're brave and we’re strong, it usually makes us into heroes. And then we can help to make other people’s suffering more endurable in the future.”

That was the message from actor Ezra Miller, known to Carter LaCasse as The Flash, a superhero speedster of the DC Comics’ Justice League. In a video shared to Facebook on Dec. 31, 2021, Miller spoke directly to Carter, an 8-year-old from Pittsfield, and encouraged him to stay strong in his battle against leukemia.

Miller says that being brave and strong is what makes someone a hero. “It makes you, honestly, exactly the type of person we’re looking for in the Justice League,” Miller said. “So the next time we’re recruiting, call me up, and I imagine by then you will have powers. Powers, Carter!”

The video was a surprise for Carter, and put a “huge smile” on his face.

“Carter was in shock and he was so excited about the video from his favorite superhero, The Flash,” said Carter’s mom, Crystal Czerno, via email this week. When a friend of hers, comedian and Pittsfield native McQueen Adams, found out about what Carter is going through he reached out to Miller, who plays Carter's favorite superhero.

“Ezra Miller is a brilliant and beautiful person with a very special soul," Czerno said. "The video put a huge smile on Carter's face and gave him much needed reassurance that he is going to be OK, but he must stay brave and strong, and for that I can not thank The Flash (Miller) enough."

Miller is also known for roles in the film series “Fantastic Beasts,” as well as “The Perks of Being a Wallflower,” and “We Need to Talk About Kevin.”

Carter went from being a superhero-loving 8-year-old boy — who his mother described as caring, sweet and a lover of animals — to needing a superhero-sized boost of morale after one night last November, he started not feeling well.

Czerno, a math teacher at Pittsfield High School, said Carter had felt exhausted and spent the day in bed. He began vomiting but didn’t have a fever.

“I noticed that his color was off, it wasn't necessarily pale as much as it was a grayish-green color,” she said. “I called my mom and asked her to bring me some medicine and Pedialyte. When she got there, she commented on his color as well.”

Czerno called her son's doctor's office and the nurse said there was a stomach bug going around and to just keep an eye on him. Carter stopped vomiting and returned to school that Thursday.

“His color was still very off,” Czerno said. “I noticed he was very lethargic too. On Thursday night, I was watching him sleep and I had an overwhelming feeling that something was very wrong. I don't know how to explain it other than ‘mother's intuition.’”

When Carter became sick again on Friday morning, Czerno knew this was something other than a “bug” and made an appointment to see a doctor. Upon examination, the doctor suggested Carter be taken to the emergency room for bloodwork.

“Within what felt like an hour, we were informed we would be transported to a hospital with a greater pediatrics department and lab with a more extensive testing ability because his blood levels (all of them ... red blood cells, and platelets) came back critically low,” Czerno said. “Around 12:15 a.m. (now Dec. 4) we were being transported to Baystate. It was within 10 hours of being there I heard the word ‘leukemia' for the first time. I felt sick. I was definitely in shock.”

Carter has been diagnosed with acute leukemia of ambiguous lineage, which Czerno describes as a rare, unclear form. Because testing cannot clearly identify or narrow down which type he has, it’s difficult to come up with a treatment plan.

According to the National Cancer Institute, leukemia is a broad term for cancers that affect blood cells and bone marrow. “The type of leukemia depends on the type of blood cell that becomes cancer and whether it grows quickly or slowly. Leukemia occurs most often in adults older than 55, but it is also the most common cancer in children younger than 15.”

Holiday in the hospital

Carter began chemotherapy on Dec. 10 at Baystate Medical Center in Springfield. Since then, he has been admitted and discharged from Baystate, Boston Children’s Hospital in Boston and Berkshire Medical Center for testing and treatments.

Czerno has been posting status updates to her Facebook page with the hashtag #CarterStrong. In one of these posts, Czerno writes about spending the holidays in the hospital. While they knew staying at Baystate was the best decision for Carter, he was “devastated” to be missing out.

“It is easy for all of us to say Christmas is not what is important here, but he is 8. Christmas as a young child is magical, and there is nothing magical going on right now for him,” she wrote. In the next post, Czerno decided to find a way to gather some Christmas spirit for Carter even when they had to be away from home. In her posts, she shared pictures of celery and carrots for Santa’s reindeer and a cookie for Santa. With the help of nurses and friends, they were able to find and hang Christmas lights to help spread cheer.

“The nurses here are AMAZING and they are on board and willing to do whatever they can to help this amazing boy,” she wrote.

How you can help: Donate blood

Many friends and community members have been reaching out to Carter’s family to see if there’s anything they can do to help. The best way, Czerno says, is to donate blood.

Carter is "transfusion dependent," which means he has been receiving platelets daily and red blood cells almost daily, as well. He is now getting platelets on schedule twice a day and RBCs once a day.

“It was because of his high need that I was made aware of the national blood shortage," Czerno said. “I began by asking family and friends to please donate blood. My friend Madison Quinn (founder of Strong Little Souls) reached out and asked if I wanted her to try and organize a blood drive in Carter's honor.”

The first blood drive was held at Zucchinis on Jan. 3 and a second one on Thursday, Jan. 6, at the Pittsfield Department of Children and Families. All appointments for these blood drives were filled in advance.

“I want people to know that they can (and please, should) donate blood at the donation center at BMC,” Czerno said. “I hope this helps get the word out even more about the blood shortage and I hope as many people as possible become regular donors.”

There is also a GoFundMe fundraiser to help Carter's family for anyone who would like to donate.

“I have explained to Carter that because of everything he is dealing with, a lot of other people are going to get help (blood) that they need and that makes him so happy,” Czerno said. “I can't thank people enough for everything that they have done to show support and love for us. I can definitely say that our army back home, waiting and ready to fight this battle with us, is beyond strong and if I was Carter's cancer, I would be scared.”

For now, Carter is staying at Boston Children’s Hospital.

“He misses his brother and all of his family so much, but he is staying strong and he is so brave,” Czerno said. “The Flash may be Carter's favorite superhero, but [Carter] is mine!”

Carter LaCasse, a student at Allendale Elementary School, returned to Pittsfield after months of treatment for leukemia. There was a big crowd there to welcome him.