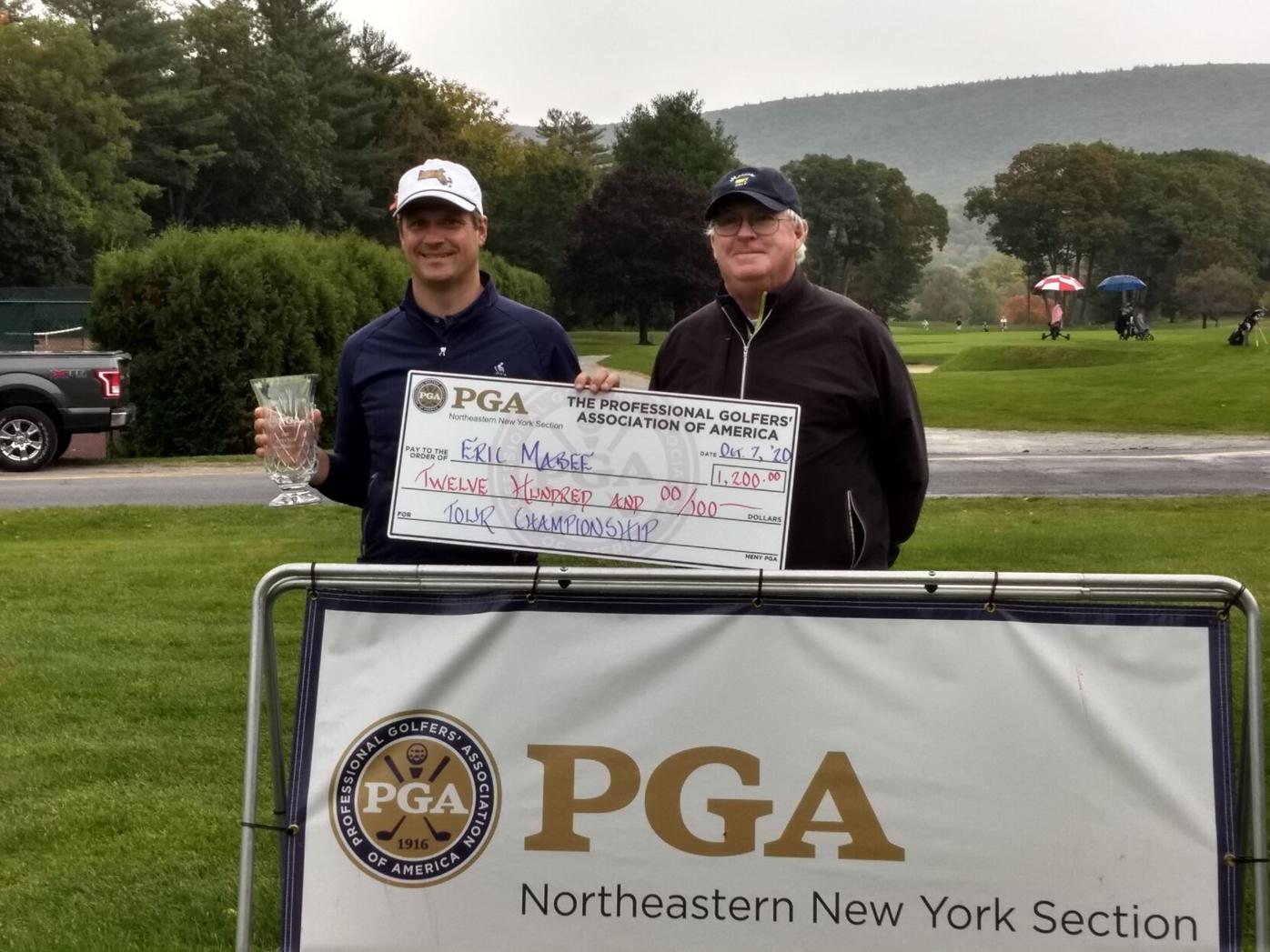 Wyantenuck Country Club head profession Tom Sullivan, right, stands with Eric Mabee after a golf tournament at Wyantenuck on Wednesday. Hours after this photo was taken, Sullivan died when his golf cart was struck by a tree on the course. Sullivan spent his life teaching the game of golf to anyone that would listen. 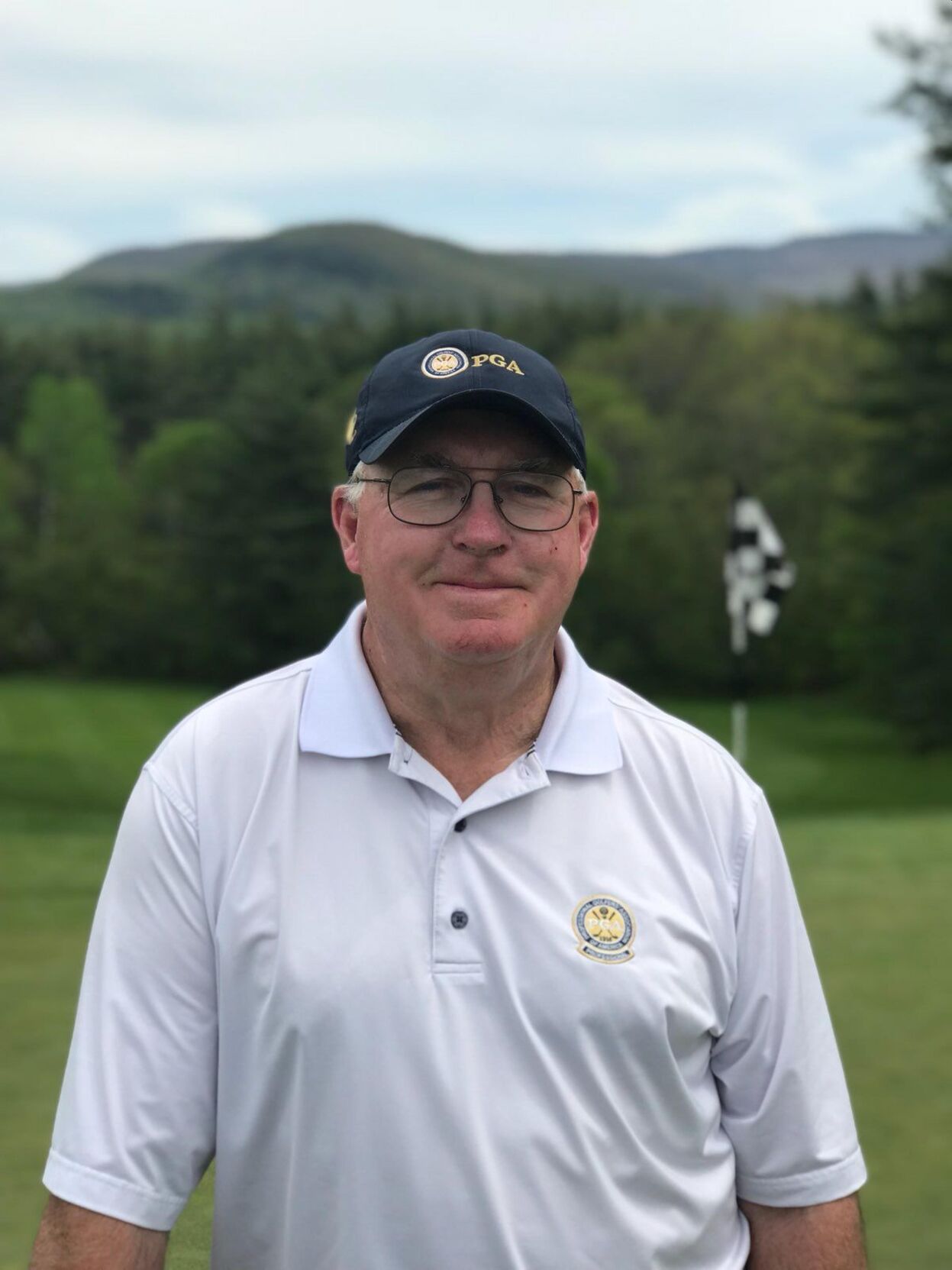 GREAT BARRINGTON — The acclaimed head golf professional at a Great Barrington golf course died Wednesday when a tree fell onto his golf cart in the midst of a violent thunderstorm.

By the time first-responders arrived after 5:30 p.m. at the Wyantenuck Country Club, Thomas P. Sullivan could not be revived, authorities said Wednesday.

Word of his death stunned the golfing community.

“Half the pros in the county went to him for lessons,” said Richard Lord, a golf writer and former sports editor for The Eagle. “He was a genius on the golf course. This has hit me hard.”

A neighbor of the West Sheffield Road course noticed a tree sitting atop a cart about an hour after a line of thunderstorms came through the area, delivering heavy rain and hail and cutting power.

Two Great Barrington police officers, Timothy Ullrich and Brandon Hammer, found Sullivan lying on the ground near the cart. Efforts to revive him through first aid were unsuccessful, according to Police Chief William R. Walsh Jr.

The cart was found sitting beneath several trees and branches, police said.

An investigation into the circumstances of Sullivan’s death was expected to continue Thursday.

In 2018, Sullivan was inducted into the Northeast New York PGA Hall of Fame. At 71, Sullivan had spent his life in the golf industry, the last two decades as the resident pro at Wyantenuck.

The course owner, Jennie Van Deusen, was not yet aware of the circumstances of the accident and declined to comment.

Lord said news of the accident traveled quickly through the golfing community. “He was probably the most popular pro in the county,” Lord said. “The nicest guy in the world. There’s nobody in the county who’s more liked in the golf world.”

Lord said that Sullivan had planned to retire soon, closing a long career of accomplishment on the links. When inducted into the hall of fame, Sullivan became just the 44th golfer to join that exclusive list of New York and New England golfers.

At the ceremony in Saratoga Springs, N.Y., Sullivan expressed deep appreciation for the honor, as his wife, Kathy, and two children, Sarah and Ryan, listened, according to the organization.

“I guess it kind of means that I’ve done the job that I am supposed to, I guess,” Sullivan said. “I’m not one of those award-type guys. They kind of caught me off-guard with this one and it was a little overwhelming to me at first that I would be considered for a Hall of Fame.”

“It kind of tells me that I chose the right path and my decision to become a golf pro years ago has turned out to be fortunate,” he said. “Next to my marriage, it’s the greatest thing that has ever happened to me.”