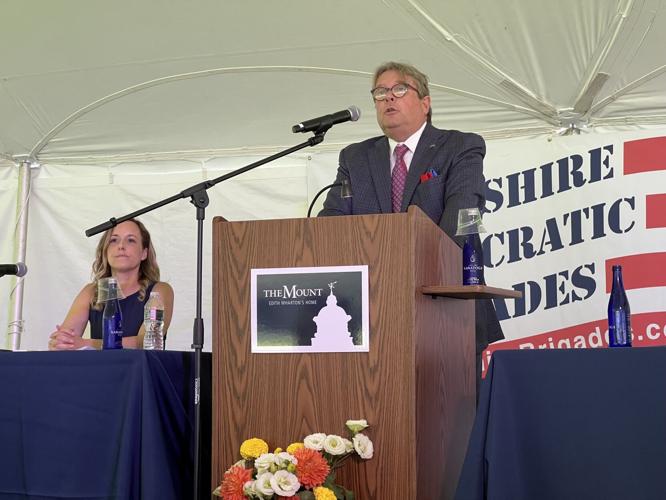 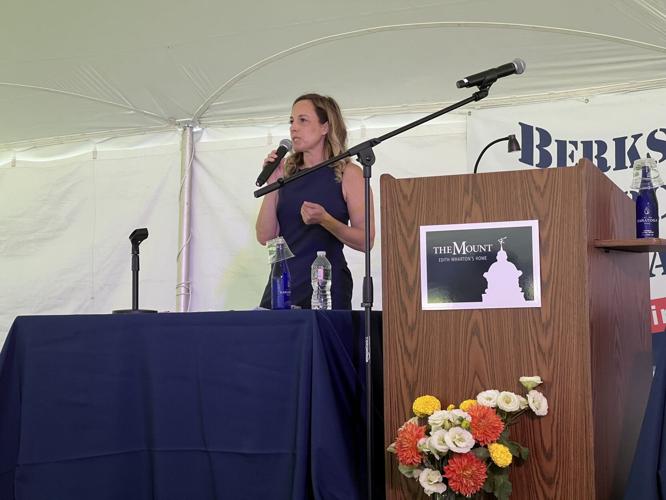 Berkshire District Attorney Andrea Harrington told voters that challenger Timothy Shugrue's focus on "sweating the small stuff" and recent shootings was part of a "fear mongering" tactic that stretched back to his 2004 campaign for the office.

LENOX — Berkshire District Attorney Andrea Harrington has remained steadfast in expressing pride for her office’s work over nearly four years. For the final debate before the Democratic primary next week, challenger Timothy Shugrue brought a list of cases he said challenge that view.

Harrington came prepared with her own list of cases she said demonstrates her success in bringing violent offenders to trial in Berkshire County.

A week out from the primary, the Berkshire Democratic Brigades hosted the last debate between the two candidates for Berkshire district attorney under a large tent on the lawn of The Mount. Over the hour-long event, the candidates were given free rein to discuss their platforms in depth, uninterrupted by questions.

With this freedom, the candidates returned to familiar disputes.

Harrington said her office has focused on bringing equity to the criminal justice system, putting in place policies that seek to reverse the trend of over-prosecution of people of color.

She said she put a spotlight on gender-based violence and implemented responses for defendants suffering from substance use disorder.

Shugrue said that his 36 years of experience as an attorney would be on display if elected, promising to try cases in Superior Court and leading the training of the office’s district attorneys. He said he’ll use his vision of “sweating the small stuff” to bring more people into contact with the courts and direct people with substance use disorder into pre-trial diversion programs.

The candidates used a substantial portion of the debate going toe-to-toe over their case histories. Harrington said that since the courts reopened after an early pandemic shutdown, her office has had “an unprecedented level of success in our trials.”

She rattled off a list of at least 10 cases from the last four months that resulted in guilty verdicts for shootings, sexual assaults, fraud schemes and drug rings, among other offenses.

14 shootings in four and a half months: Pittsfield residents ask 'Is it time to leave?'

The DA said that crime rates for the county are down, though shootings are up — a trend she called “very concerning.”

“This community deserves a fair discussion based on facts and evidence on these important issues that we all need to work together to solve,” Harrington said. “Fear mongering is not going to make our community safer, finger pointing is not going to help us better protect people who need to be protected.”

Shugrue challenged Harrington’s statement that her office has had “unprecedented success” trying cases in the last year. He spent much of his time running through cases he said show what happens when Harrington’s policies are put to test in court.

The local defense attorney presented five cases from the last two years. Shugrue, fresh from endorsements by the police unions representing Pittsfield police and North Adams police, said officers from both those departments had presented Shugrue with the cases.

Shugrue said that of those five cases, three defendants were held without bail after Harrington’s office requested dangerousness hearings. He said in all five cases, the initial charges for illegal gun possession were reduced and many of the cases were ultimately dismissed.

“That, to me, is not success,” Shugrue said.

In their recent endorsements of Shugrue, the police unions called out Harrington’s handling of illegal gun possession and gun violence.

The Massachusetts Coalition of Police Local 382, which represents North Adams police officers and supervisors, said in a recent statement that “while there are a number of soft stances that DA Harrington has taken on a variety of subjects, such as drug possession, larceny, and breaking and entering that we do not agree with, we can no longer sit back and let the empty claims of prioritizing gun crimes in our communities continue.”

During the debate, Harrington emphasized that she views the departments as partners with her office. On shootings, she said a lack of community trust in law enforcement stands in the way of arresting suspects in these cases.

She said in a spate of 13 shootings over the course of three months in Pittsfield, there have been only six arrests “because people in the community don’t want to share information with the police, because they don’t trust the police, because of over-policing and over-prosecution for generations has led to mass incarceration — it’s broken down the trust in our communities.”

She said Shugrue’s policy of “sweating the small stuff” would only continue that trend.

Did the Berkshire district attorney's office mishandle a gun possession case, as her rival says? Here are the facts

Updated with additional detail on the Laquan Johnson case: In the final days of his campaign for the Berkshire district attorney, Timothy Shugrue has reignited a claim that incumbent Andrea Harrington mishandles gun possession cases. The Eagle reviewed a recent case involving a Pittsfield man now accused of murder.