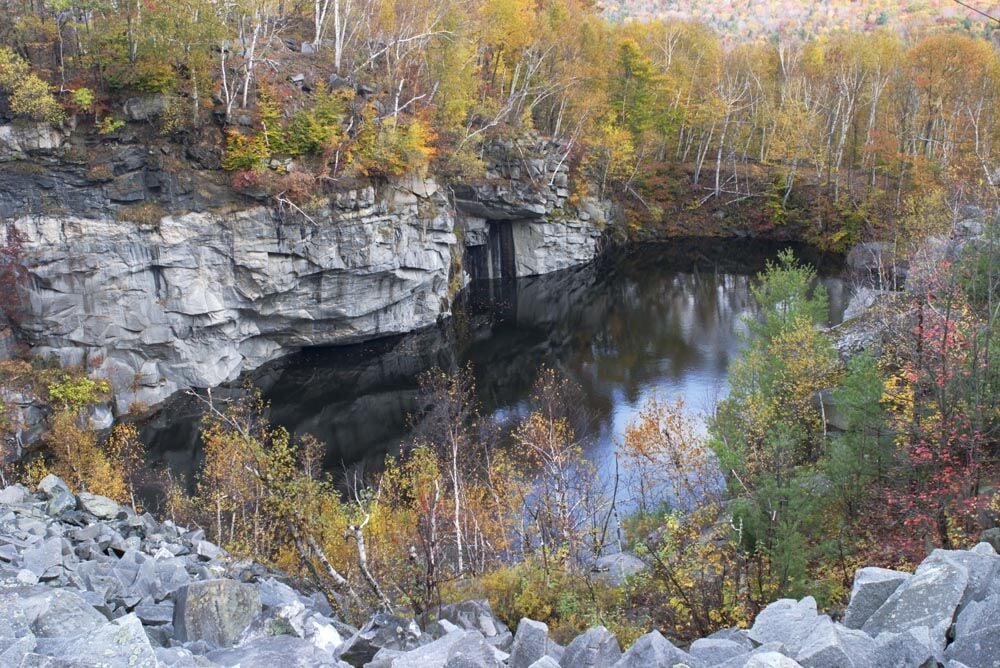 The Becket Land Trust is seeking to raise $200,000 for enhancement and upkeep of the 320-acre Becket Quarry and Forest parkland, which it then would hand over to the Trustees of Reservations. 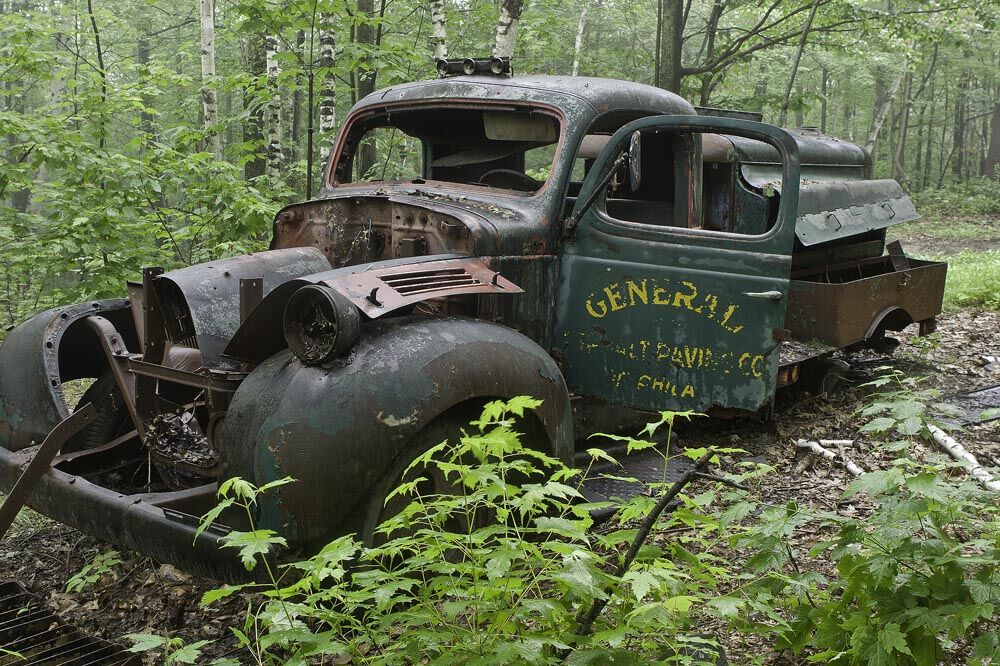 When Chester-Hudson Granite Quarry shut down in the 1960s after more than 100 years in operation, the company left behind all its equipment and vehicles, which remain scattered around the site.

Becket — The Becket Land Trust is halfway toward its $200,000 goal to preserve in perpetuity a popular rustic recreational area — saved 20 years ago from being ravaged to help build the costly “Big Dig” in Boston.

The all-volunteer organization, through private donations and grants, has raised more than $100,000 for a stewardship fund campaign that began in March. That money will be set aside for future enhancement and upkeep of the Becket Quarry and Forest parkland. Once the goal is reached, the trust will sign over the deed to the Trustees of Reservations, which will take ownership of the 320-acre property. 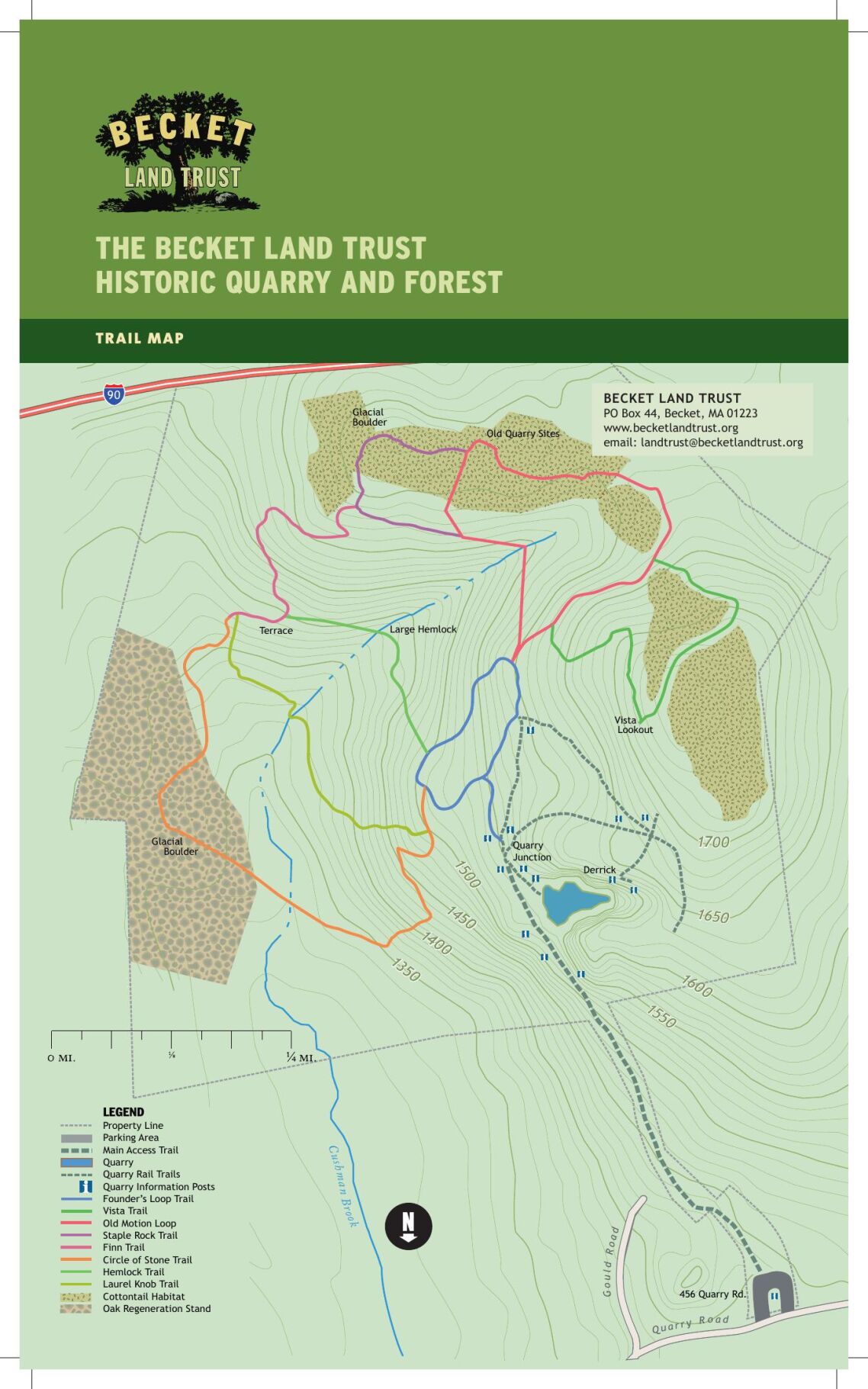 Trust President Ken Smith says the Berkshire Natural Resources Council is assisting in the fundraising, which involves a GoFundMe account opened in late November and, soon, a townwide mailing to all property owners.

The 120-member land trust, formed in 1991, bought the forested quarry in 1999 for $300,000. The preservationists jumped in to keep a company from buying the quarry and excavating millions of cubic yards of granite for Boston’s $8 billion Central Artery/Tunnel project, infamously known as the Big Dig.

Since the purchase, the land trust has developed 10 trails of varying difficulty, the main trail off Quarry Road going from a parking area directly to the quarry. Smith noted that, in recent years, the Appalachian Mountain Club has helped expand the trail system.

The year-round popularity and maintenance of the large tract of land and its 7 miles of trails has become too much for the trust to handle, according to Smith.

“To have an all-volunteer organization to maintain such a well-used property is a challenge,” Smith said. “In 2018, we had to hire a parking lot attendant from Memorial Day to Labor Day to track attendance, which was averaging 3,000 to 4,000 people during the summer. Last year, because of the pandemic, we had 14,000 visitors [during that same time period]. We likely have more beyond the summer months.”

David Santomenna, associate director of land conservation for the Trustees, says his organization is committed to keeping the park accessible and well-maintained for decades.

“It’s a significant obligation we’re taking on,” he said. “The Becket Quarry and Forest is an outstanding property with great habitat, a great trail system and an example of a bygone industrial era.”

For nearly 100 years — from the 1860s to the 1960s — the Chester-Hudson Granite Quarry mined the property for its coveted hard, igneous rock. The granite was used in monuments throughout the United States, according to the land trust website.

When the company suddenly shut down the quarry more than 50 years ago, it left behind all its equipment and vehicles, which have rusted greatly and have been grown over by the thickly forested woodland.

The quarry is filled with water, and now the area is posted, warning hikers against swimming, boating and fishing in the man-made pond, Smith said.

About a year ago, the land trust began seeking a suitor for the quarry/forest and found the Trustees of Reservations was “most interested and best qualified” to care for the land, Smith said.

“They have the manpower, expertise and resources to take over the site,” he added.

The Trustees of Reservations is a nonprofit land conservation and historic preservation group formed about 130 years ago.

Locally, it is known for Monument Mountain Reservation, Bartholomew’s Cobble, Naumkeag, Notchview, and 10 other woodland parks and historic homes and structures in the Berkshires. Across Massachusetts, it owns and maintains 127 properties.

Santomenna says the group plans several improvements to the recreational area, including making the main trail more accessible to off-road first-responder vehicles that most often respond to injured hikers in the immediate quarry area.

Santomenna hopes the group’s solid track record in the Berkshires will make it welcome in Becket.

“We take very seriously our need to integrate ourselves in the community,” he said.