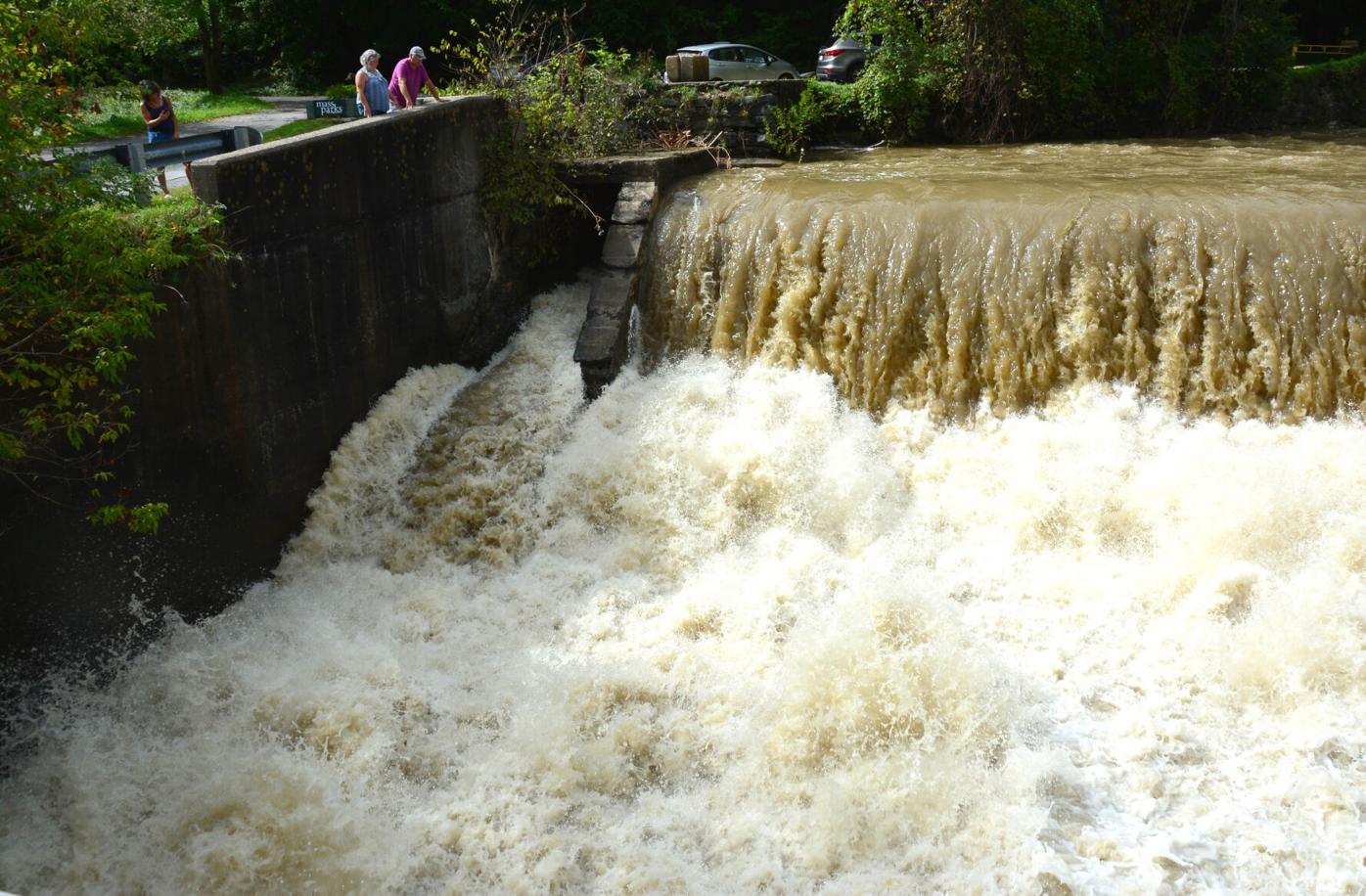 People look at the raging Hoosic River at the entrance to the Natural Bridge State Park in North Adams in September 2018, after rain from Tropical Storm Florence caused rivers to swell, along with some flash flooding in the region. 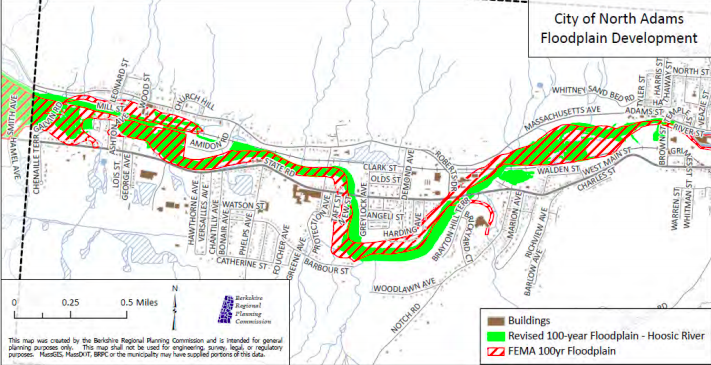 North Adams has published a draft Hazard Mitigation and Climate Adaptation Plan, which outlines potential environmental threats to the region and prioritizes flooding mitigation. The graph shows the extent of flooding in the case of a 100-year flood, which is an event that has a 1 percent probability of occurring each year and is a useful benchmark for municipalities to consider damage in the case of extreme flooding. 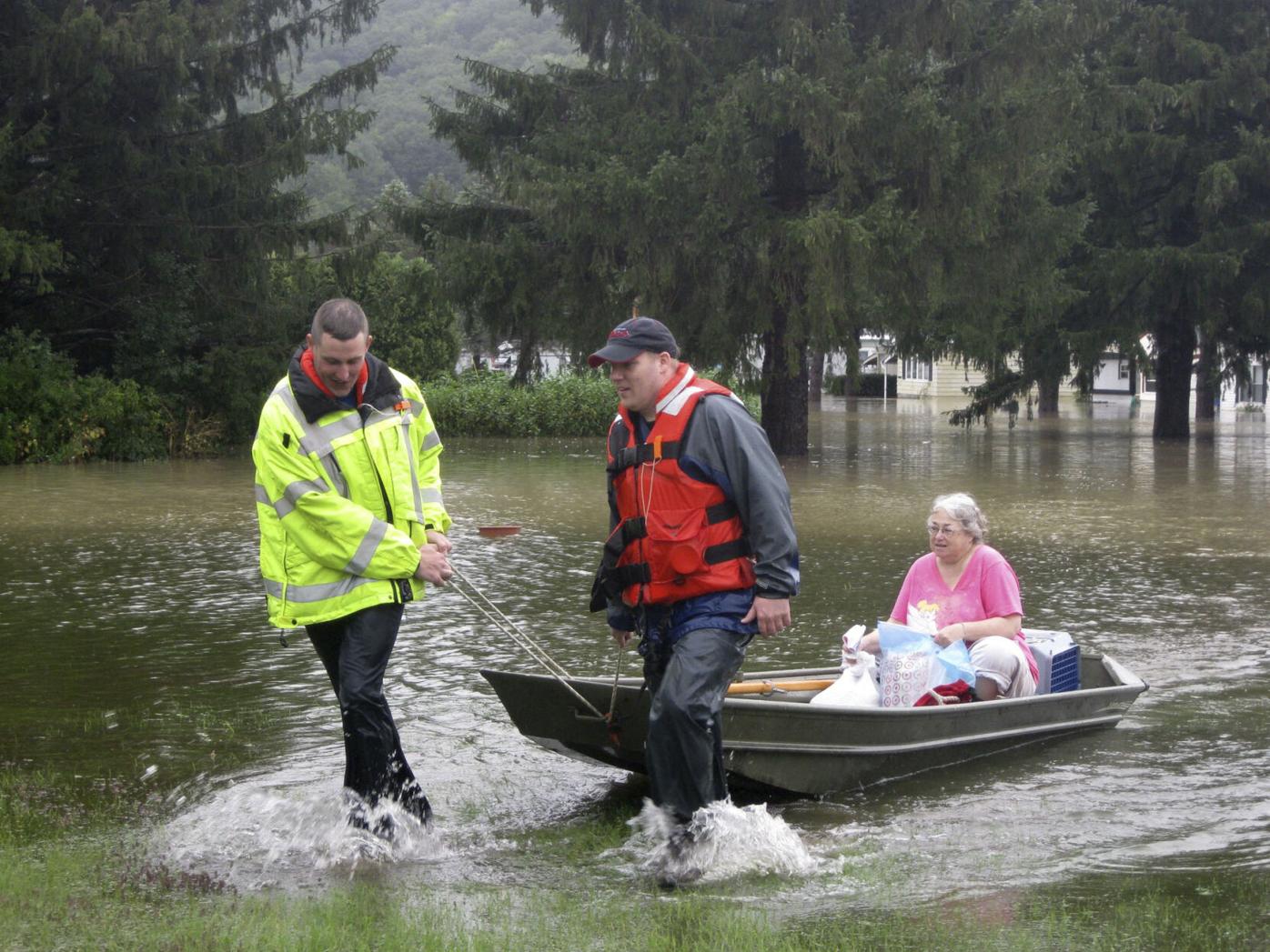 Williamstown firefighters pull a woman to safety in 2011, after floodwaters triggered by Tropical Storm Irene tore through the Spruces Mobile Home Park.

Flooding, storms and dam failures are the biggest environmental threats facing North Adams, and climate change is exacerbating those risks.

The city outlined the dangers in a draft Hazard Mitigation and Climate Adaptation Plan published Monday. Under federal law, the city must prepare the plan to be eligible for mitigation project grants.

In addition to listing potential environmental risks, the report details dozens of actions the city could take to increase its resiliency to those hazards.

The analysis ranks dangers by likelihood and magnitude. Dam failures lie on one end of the spectrum: unlikely but potentially catastrophic. Winter storms, meanwhile, are expected to occur with some regularity and pose a smaller, but still significant, threat.

The report notes that dam failures are uncommon in Berkshire County but that maintenance, age and stress might increase the likelihood of a spillover or failure. Some local dams are more than a century old.

“While dam failure is rare, when events do occur, they are frequently associated with other natural hazard events ... which limits their predictability and compounds the hazard,” the authors wrote.

Of the 12 dams located in the city, seven are listed as a “high” or “significant” hazard, which indicates that failure could result in death or property destruction. Three of those dams are considered in “poor” condition, according to the report: The Windsor Lake Dam, Notch Reservoir and the Tunnel Brook Dam.

Four dams in North Adams are held by private owners. The law requires owners to maintain their own structures, the report notes, but the city is left largely blind to issues that might arise at privately owned dams.

“As a result of difficulty in getting information on private dams, local officials are largely unaware of the age and condition of the dams within their communities,” the authors wrote.

The threat of flooding goes well beyond dam failures, and the report lists the city’s concrete chutes encasing the Hoosic River as a particular area of concern.

North Adams has experienced four significant floods since the 1930s. The chutes that run through the city were built by the U.S. Army Corps of Engineers in response to floods in the 1930s and 1940s, which washed away entire structures and automobiles, according to the report.

The analysis warns that the chutes have not been evaluated or rehabilitated comprehensively since they were built, and a 2010 report found that the system has experienced “various degrees of degradation, weakening the integrity of the structures.”

And the 2017 collapse of one section of the chutes near the Massachusetts Museum of Contemporary Art raised “serious concern,” according to the report. At the time of the collapse, Public Services Superintendent Tim Lescarbeau told The Eagle that the chute was “getting close to the end of its useful life expectancy.”

There are 185 buildings in the city’s flood plain, valued at more than $72 million in total, according to the report.

From hurricane season to the winter, severe weather threats plague the city for more than half the year.

The region is most at risk for a tropical storm from August to October, though such storms are far more likely to hit neighboring regions and spill over into the Berkshires than to hit the county directly, according to the report.

When a tropical storm or hurricane does hit the area — that’s about once every 15 years. on average — the devastation can be immense.

In 2011, Tropical Storm Irene tore through the Spruces Mobile Home Park in Williamstown. And research shows that the warming climate could double the frequency of major hurricanes by the end of the century.

Shortly after hurricane season subsides, nor’easter season begins. The report calculates that North Adams can expect an average of six big storms each winter, though the numbers vary widely, from just one storm in 2006 to 18 storms in 2008.

Snowstorms pose a major threat to residents in rural areas, low-income residents and the elderly, according to the report. And while total snowfall has been decreasing over the past century, climate change is expected to increase the severity of rain and snow events.

The analysis includes millions of dollars worth of potential solutions, a vast majority of which target potential flooding in the city.

“The most pressing issue needing mitigation in North Adams is flooding,” the authors wrote, as a result of aging stormwater infrastructure and “compromised” flood chutes.

The list of 40 proposed fixes includes assessing the structural integrity of the chutes, replacing culverts to reduce street flooding, and redesigning flood mitigation around Mass MoCA and Willow Street. The plan also calls for establishing emergency evacuation routes and purchasing “temporary bridges” that would prevent residents from being stranded during a storm.

The city might be eligible for federal and state money for many of the solutions listed. As the hazard mitigation plan must be included every five years, the city’s next report will include completed actions, as well as upcoming goals.

Of the 12 dams located in the city, seven are listed as a “high” or “significant” hazard, which indicates that failure could result in death or property destruction. Three of those dams are considered in “poor” condition, according to the report: The Windsor Lake Dam, Notch Reservoir and the Tunnel Brook Dam.