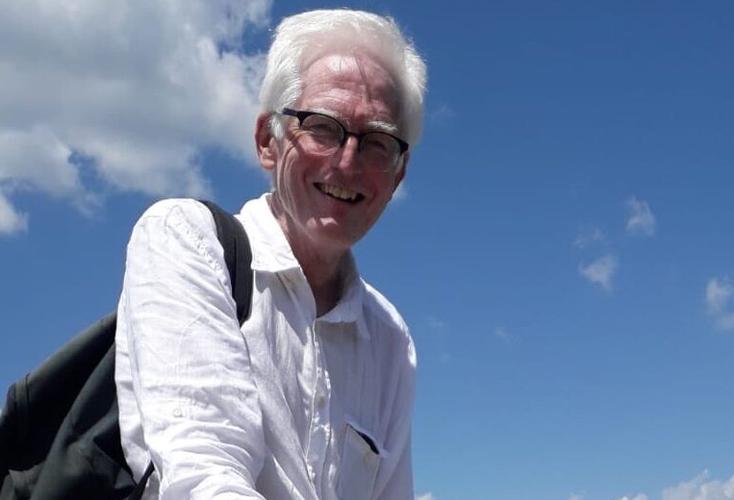 Donald MacGillis on one of his regular expeditions with a hiking group in the Berkshires. The former Eagle executive editor died Wednesday after a 50-foot fall while hiking. 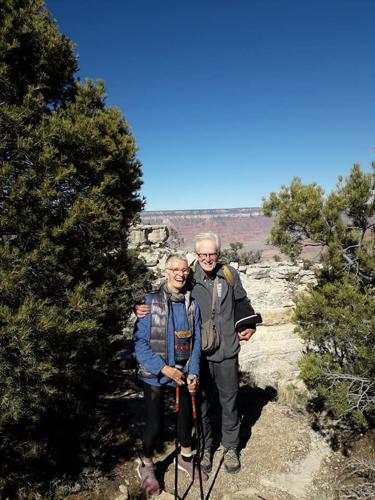 Donald MacGillis, right, on a hike with his wife Ingrid. 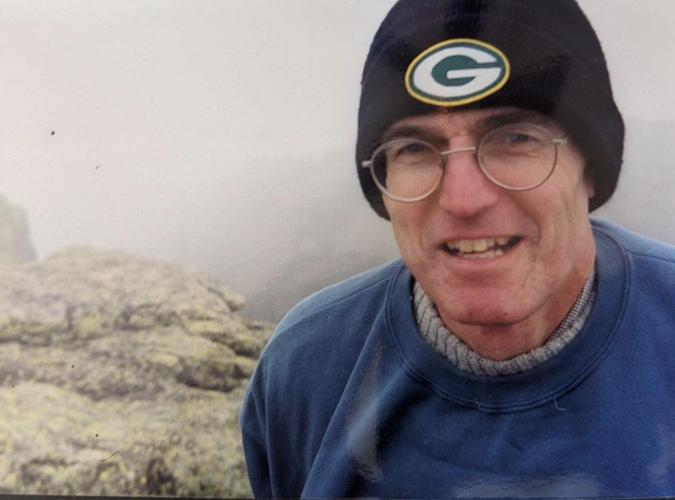 Donald MacGillis sports a Green Bay Packers hat during a hike in the White Mountains of New Hampshire in 1999.
1 of 3

Donald MacGillis on one of his regular expeditions with a hiking group in the Berkshires. The former Eagle executive editor died Wednesday after a 50-foot fall while hiking.

Donald MacGillis, right, on a hike with his wife Ingrid.

Donald MacGillis sports a Green Bay Packers hat during a hike in the White Mountains of New Hampshire in 1999.

MacGillis, 74, of Pittsfield, was a passionate hiker, and had been on an expedition with his 25-year-old nephew, Paul MacGillis.

After starting out in good weather, the pair got lost in the fog as they struggled against fierce winds on the Knife’s Edge trail Tuesday and were located the following morning when rescuers airlifted them to safety, according to MacGillis’ son, Alec MacGillis.

The two men called 911 while trapped on the dark trail and were told to shelter in place, and hunkered down under a rock overhang as temperatures dropped below freezing overnight, Alec said.

“They were literally worried about being blown off the mountain,” he added.

Around 3 a.m., Donald MacGillis stood up, stepped away and fell down the rocks, suffering chest injuries and a broken leg. After calling 911 again and learning that the weather would prevent a rescue until later in the morning, Paul MacGillis stayed with his uncle and kept him conscious before the two men were transported in separate trips to a hospital in Bangor by a Black Hawk helicopter that arrived around 10 a.m. Donald MacGillis died in the hospital several hours later, according to his son.

“Paul was extraordinary and kept him going throughout the night,” Alec said on Thursday, speaking by phone from Hampden, Maine, where he had joined his cousin, who had already recuperated from hypothermia and exhaustion. “It was just heroic.”

Alec said the two men were worried about Wednesday’s weather, and so they set out on Tuesday for Knife’s Edge, which links Pamola Peak with Mount Katahdin, which is the northern terminus of the Appalachian Trail. He said his father wanted his nephew to experience the trail, after climbing the mountain every year with a hiking group.

The two men had grown close after Paul’s father died when he was around 5, and took trips together to explore or visit family,

“You could hear the light in his voice,” Alec said, referring to his father’s description of the upcoming trip. “There’s a beautiful photo of them beaming as they set out on the hike.”

Donald MacGillis was chairman of The Eagle’s Advisory Board and helped the paper’s new owners navigate the news business as they worked to acquire The Eagle in 2016.

Let go from The Eagle after William Dean Singleton’s MediaNews Group bought the paper in 1995, MacGillis joined the Boston Globe as an editorial writer that same year. He later served as The Globe’s national politics editor before retiring in 2012. While working in Boston, MacGillis retained his residence in Pittsfield.

The Eagle family was devastated by the news.

“MacGillis regarded journalism as the noblest of professions. A newsman through and through, he loved breaking the news and demanded that journalists dig deep and investigate and report the sides of the story the public wasn’t getting,” said Kevin Moran, The Eagle’s executive editor. “If you weren’t digging deeper, Don would let you know it. That we lost such a vibrant man is a painful tragedy, and the entire Eagle family sends the MacGillis family our heartfelt condolences.”

“I was just over at his house three weeks ago sitting in the backyard having some beers,” said longtime Editorial Page Editor Bill Everhart, who retired in July. “It’s an awful thing.”

Fredric D. Rutberg, The Eagle’s president and publisher, was still serving as a district court judge in Pittsfield when he came up with the idea to bring the paper back to its former glory after the paper had languished under years of corporate ownership. Rutberg was part of the group that brought The Eagle back under local ownership when they purchased the paper in 2016.

MacGillis was instrumental in showing why exceptional local journalism is critical to the health of a community, and how to relight that fire, Rutberg said.

“He kept the flame burning,” he said, referring to MacGillis’ love for the paper. “He was a sounding board, and always kept everyone’s eyes on the larger prize. He said, ‘We have to have great journalism, tell great stories, and they have to be accurate and important. We have a real duty.’

“I think he was extremely good at his job, and fair,” added former Eagle editor and reporter Grier Horner, who worked for The Eagle for 32 years before retiring in 1997. “He looked at things intelligently and he didn’t jump to conclusions.

“When he was managing editor, it was at the time when the newsroom was going through all sorts of contractions in size because the paper was running into economic problems,” Horner said, referring to the period shortly before the Miller family sold The Eagle to MediaNews Group. “Don fought for the newsroom and for not having to lay off so many people.”

MacGillis, who became The Eagle’s executive editor in December 1992, also headed the newspaper’s opinion section for many years. Everhart, who began his career at The Eagle as a sportswriter, said it was MacGillis who gave him a shot at writing editorials in 1991.

“He gave me my chance when I was looking to do something different from sports,” said Everhart, who worked at The Eagle for over 30 years. “He and (former Eagle Editor) Mark Miller took a chance on me and enabled me to go off in a different direction and have a good time in the editorial department, for which I am eternally grateful.”

“He was a very smart guy,” Everhart said. “Very well informed, opinionated of course, but always well grounded in facts.

“He had a very dry Scottish sense of humor,” he said. “Loved the Red Sox. Loved the Patriots. Lived and died with both of them. … Just an all around good guy.”

MacGillis was born on the south side of Chicago on May 18, 1946, the same day as baseball great Reggie Jackson.

“He always liked to say that he was born on the same day,” Alec said.

The family of three boys and three girls moved to Wisconsin, then to West Hartford, Conn. MacGillis’ father died young, and Donald shared a room with his two brothers.

“They all took care of each other,” Alec said

MacGillis went to Yale University, where he graduated in 1968 with a degree in English. One of his classmates at Yale was former President George W. Bush.

He was drafted into the U.S. Army after graduating from Yale, and was sent to Germany, where he served as a medic for 16 months. While stationed there, MacGillis became fluent in German, began graduate studies at the University of Wuerzberg and met his future wife, the former Ingrid Scheitweiler.

After working for The Hartford Courant, MacGillis joined The Eagle at age 25 in September 1971, originally serving as a reporter in the newspaper’s Southern Berkshire bureau in Great Barrington. His wife also came to the U.S. for the first time that year, before the couple were married, to study history at Mount Holyoke College.

“When Don and Ingrid first came to Pittsfield they lived with us in a spare room that we had,” Horner said. “That may sound horrible but it worked out really well.”

During his 24 year career at The Eagle, MacGillis frequently wrote columns about his experiences traveling in other countries. He went to Japan in 1982 on a trip sponsored by the Ministry of Foreign Affairs.

In 1987, MacGillis and former Berkshire Community College Dean Alexandra Warshaw spent 10 days in the former Soviet Union, traveling to Moscow and Leningrad, where they interviewed 20 “refuseniks” — Soviet citizens, mostly Jews, for whom the government had denied exit visas.

While working for The Globe, MacGillis traveled to Indonesia in 2004 on a medical relief vessel with doctors and nurses from Massachusetts General Hospital to report on the destruction that a tsunami had left in Banda Aceh.

“It’s an inadequate understatement to say that Don was among the nicest people to ever come through our doors — and one of the most talented,” wrote Boston Globe editor Brian McGrory in an article published Thursday in The Globe. “His Globe career spanned from 1995 to his retirement in 2012, much of that spent on the editorial board with a sharp eye and a nuanced pen, as well as on the national desk, where he brought a strong dose of sophistication and wisdom to our coverage. As important, perhaps more important, Don fostered genuine and meaningful relationships all around the room.”

MacGillis is survived by his wife, son, Alec, and daughter Lucy MacGillis.

Heather Bellow can be reached at hbellow@berkshireeagle.com, on Twitter @BE_hbellow and

Tony Dobrowolski can be reached at tdobrowolski@berkshireeagle.com or at 413-496-6224.

“MacGillis regarded journalism as the noblest of professions. A newsman through and through, he loved breaking the news and demanded that journalists dig deep and investigate and report the sides of the story the public wasn’t getting." Kevin Moran, executive editor for The Eagle.