PITTSFIELD — The former head nurse at Springside Rehabilitation and Skilled Care Center claims she was fired after blowing the whistle on inadequate staffing during a COVID-19 outbreak last winter that prompted the state to send in the National Guard.

In a complaint filed in Berkshire Superior Court, Laura Heath, Springside’s former director of nursing, says her Jan. 21 termination came in retaliation for her multiple complaints of under-staffing by facility owner BaneCare Management LLC. Those complaints came as a January outbreak tore through the center, further shrinking staff and leading to federal citations and financial penalties for abuse.

Heath is seeking compensation that includes lost wages and benefits, attorneys’ fees and costs, and damages for emotional distress. Her lawsuit says officials made up an excuse to fire her, and gave her “a performance improvement plan dated the same date as her termination.”

“The purported reasons for the termination were an ongoing attitude and behavior issues,” Heath’s complaint says. “There was no documentation in Heath’s personnel file to support these alleged reasons for termination.” 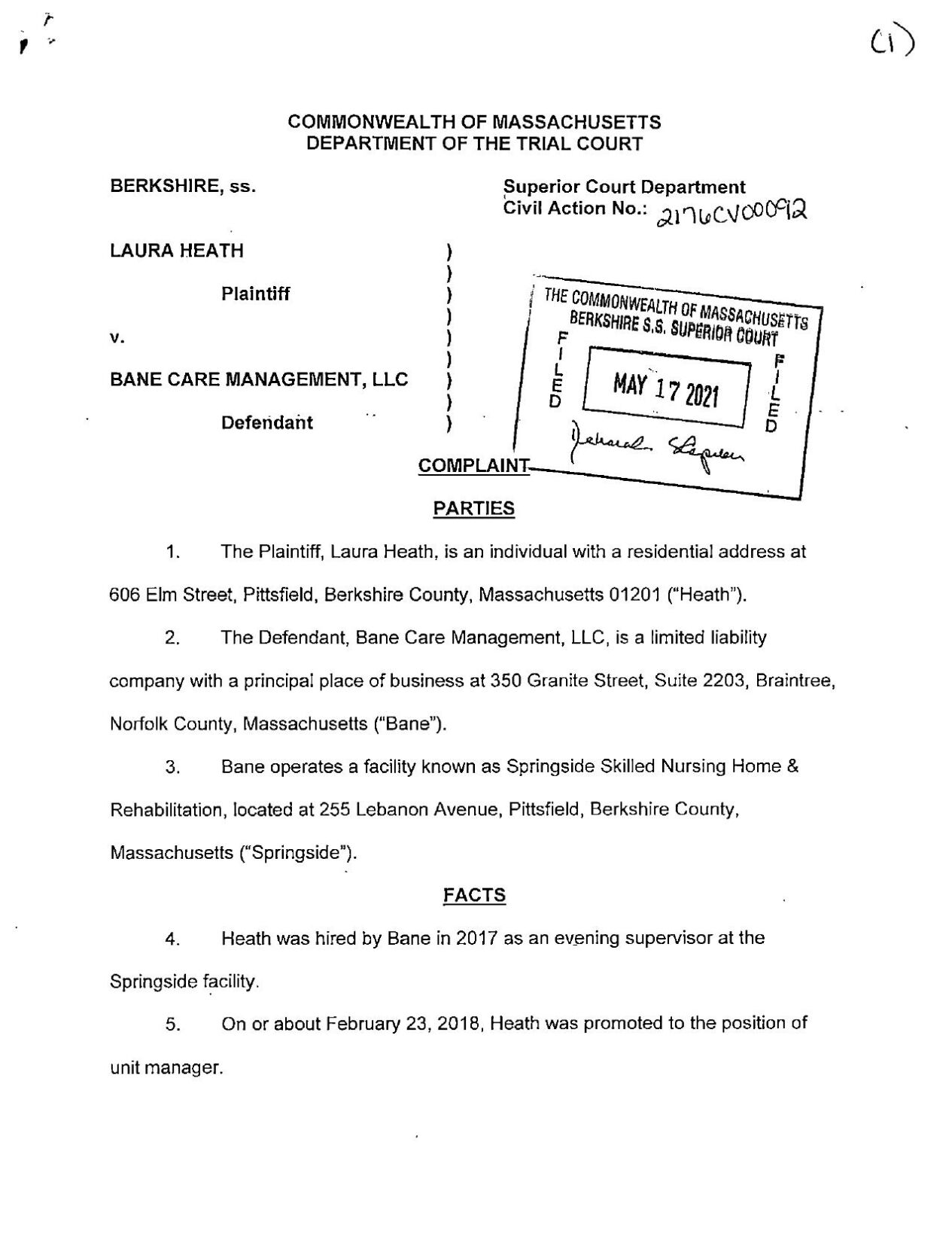 In her three years at the facility, Heath moved up the ranks from evening supervisor in 2017 to director of nursing in 2020, according to court documents. “Heath had only received positive performance reviews and several promotions during her employment,” the complaint says.

Citing the litigation, Heath said she could not answer further questions or comment on her experience at Springside.

Two sources familiar with the situation — including one person who worked at the facility at the time — contacted The Eagle and corroborated Heath’s claims.

In response to questions, BaneCare spokesperson Emily Sugrue said the company was grateful when another administrator, Springside’s executive director, asked the National Guard for help, and acted during the crisis to shore up staff levels.

“We redeployed staff from sister facilities who provided extensive support,” Sugrue wrote in an email. “These staff members were given bonuses, and housing expenses for those who came from outside the area. Regional (RN) clinical nursing consultants provided onsite services, as well. Nurse staffing agencies were utilized to fill shifts. We were having calls seven days per week with DPH and/or epidemiology to assess the situation.”

The coronavirus outbreak at the 115-bed nursing home last winter reduced already low staffing levels to the point that call bells went unanswered for long periods and residents with bedsores were left in their waste for up to eight hours, according to a federal Centers for Medicare and Medicaid Services report released Feb. 5.

More than 100 COVID-19 cases were reported at the facility, and 16 of affected residents died. One former employee, speaking on the condition of anonymity, said the true death count is 24. The positive case counts included at least 37 employees, one of whom was Heath, who tested positive nine days before she was fired Jan. 21.

What happens when staffing levels are low, and the government doesn't force companies to comply?

The federal report describes the nursing home as a place where there weren’t enough staff members to routinely reposition every resident to prevent bedsores, avoid falls, or properly monitor vital signs in a wing of acutely sick residents. And at one point, there was one certified nursing assistant per 53 residents.

Fines for not protecting residents from abuse, neglect, physical harm and mental anguish totaled $27,739, which comes to around $241 per bed.

Court documents say that on Jan. 8, Heath told BaneCare President Kevin Morris there was “insufficient staff to appropriately care for the residents.” Morris is in the process of purchasing the facility from company founder Richard Bane.

Springside nursing home in Pittsfield, recently cited for abuse, to be sold

The next day, Heath also complained to Bane corporate officials. The lawsuit does not say whether it was Heath who contacted the state Department of Public Health about the staffing shortage. But it says that a report to the DPH appears to have sparked the arrival of medics from the National Guard on Jan. 10. City officials also expressed concern about the situation, and said facility administrators were not forthcoming.

BaneCare owns 12 facilities in the state, including two in Dalton. One of those is Craneville Place Skilled Nursing and Rehabilitation Center, which also has struggled with staffing levels and has been fined more than $65,000 by the government for violations that include failing to protect residents from sexual abuse by a male resident.

Low staffing ratios are a problem in nursing homes across the U.S. and create an environment that is ripe for abuse, neglect and squalid conditions, say industry experts.

Do you have a tip about a Berkshire County nursing home?

You can share it anonymously with The Eagle. Call 413-329-6871. Your identity will be kept confidential.

You can also text that number via SMS or the encrypted messaging app Signal.